You are browsing the search results for "Guy Mettan" 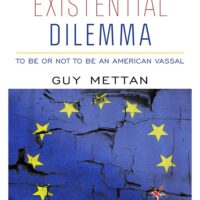 While Europe as a whole remains a first world economic power despite Brexit, it has been unable to build a truly democratic and efficient state or carry weight as a respected power on the international scene. Its splendid intellectual and artistic icons of the past two centuries are dimming in memory. No longer is Europe a radiant cultural Mecca for the world.

Mettan examines the problems confronting contemporary Europe—its democratic “deficit”; the stifling primacy of economics and law over politics; the sprawling expansion of an ever unsatisfactory governing institutions; its inability to secure peace within its territory; and far from least, the ongoing encroachment on its sovereignty by the United States.

Europe faces two possible futures. It can choose to lapse into insignificance, subservient to ever increasing US demands and ascendancy, unable to address its unique concerns in defense or energy policy while being denied potential economic benefits from a rising China and forced into ever deeper and dangerous confrontation with Russia.

Or Europeans, fully conscious of what is at stake, face up to Europe’s problems and create an institutional framework that will enable it to stave off its inevitable decline into vassalization—seizing the opportunity of the new space opened by the emerging Chinese power to create a truly democratic and sovereign federal union. Switzerland provides a model.

“This engaging book on Europe’s options encourages the reader to have the courage of his/her convictions and proactively defend and build upon Europe’s rich cultural and religious heritage.  This book is a must-read for all who want to understand the current crisis of identity and the importance of reaffirming European and in particular Swiss democratic traditions. Distinguished Swiss journalist and politician Guy Mettan, former President of the Geneva Grand Conseil,  is an optimist who believes in values, human rights, democracy and the rule of law.” ALFRED DE ZAYAS, former UN Independent Expert on the Promotion of a Democratic and Equitable International Order 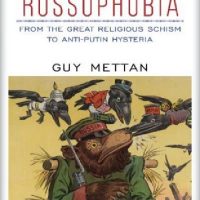 Why do the USA, UK and Europe so hate Russia and Vladimir Putin? How is it that Western antipathy, once thought due to anti-Communism, could be so easily revived over a crisis in distant Ukraine, against a Russia no longer communist? Why does the West accuse Russia of empire-building, when 15 states once part of the defunct Warsaw Pact are now part of NATO, and NATO troops now flank the Russian border? This book unpacks a history of blaming Russia…

“Guy Mettan’s book is a formidable deconstruction of the imperialist mindset and as such it is truly a ‘must read’.” THE SAKER, Global Research