Log In
View cart “UNDERSTANDING THE WAR INDUSTRY” has been added to your cart. 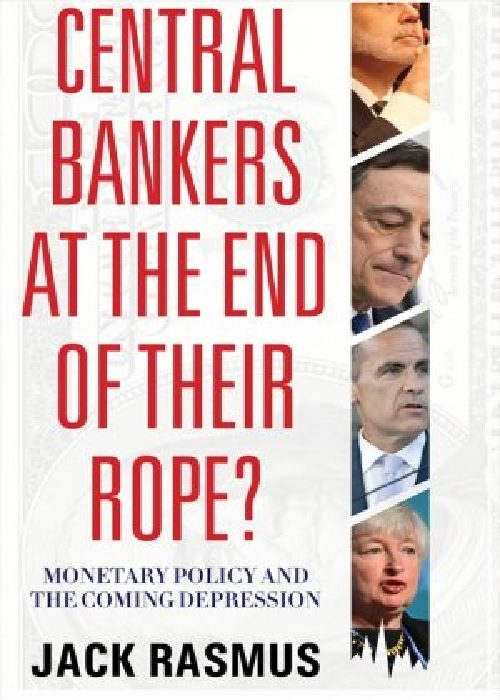 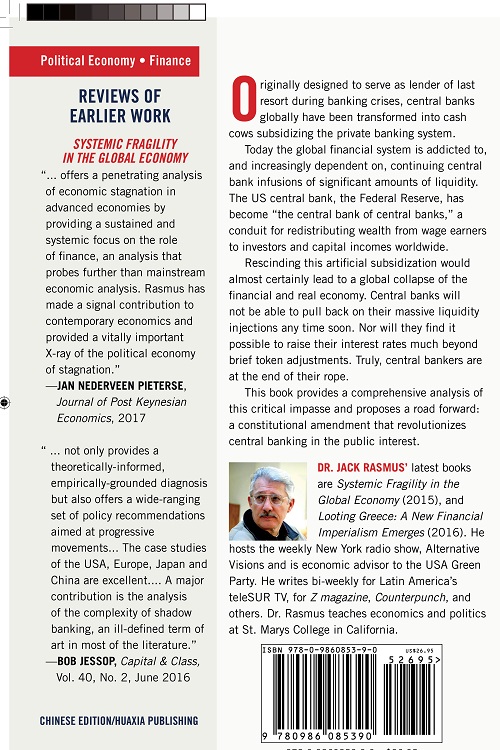 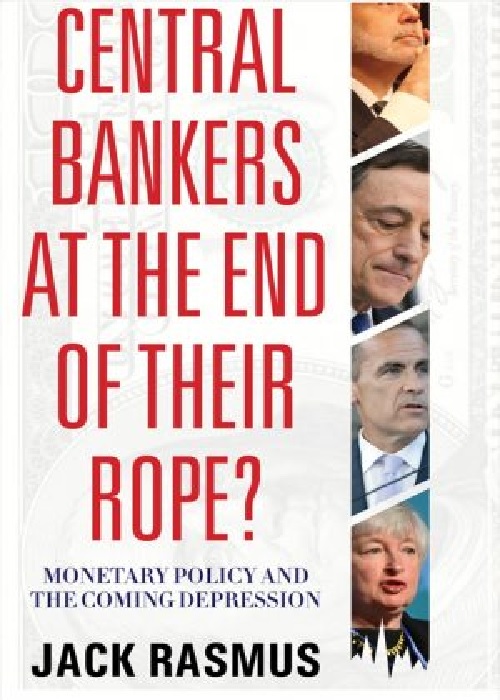 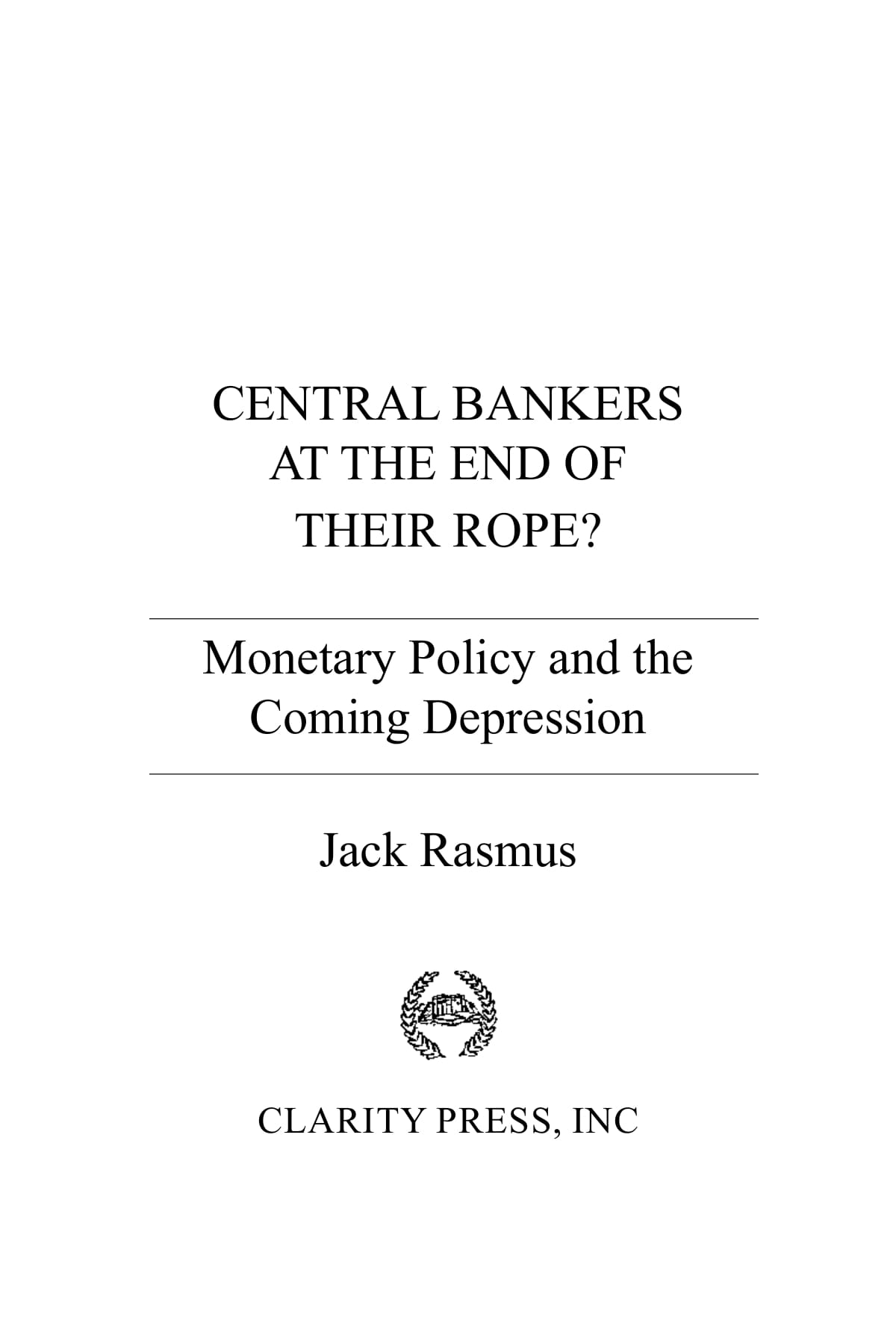 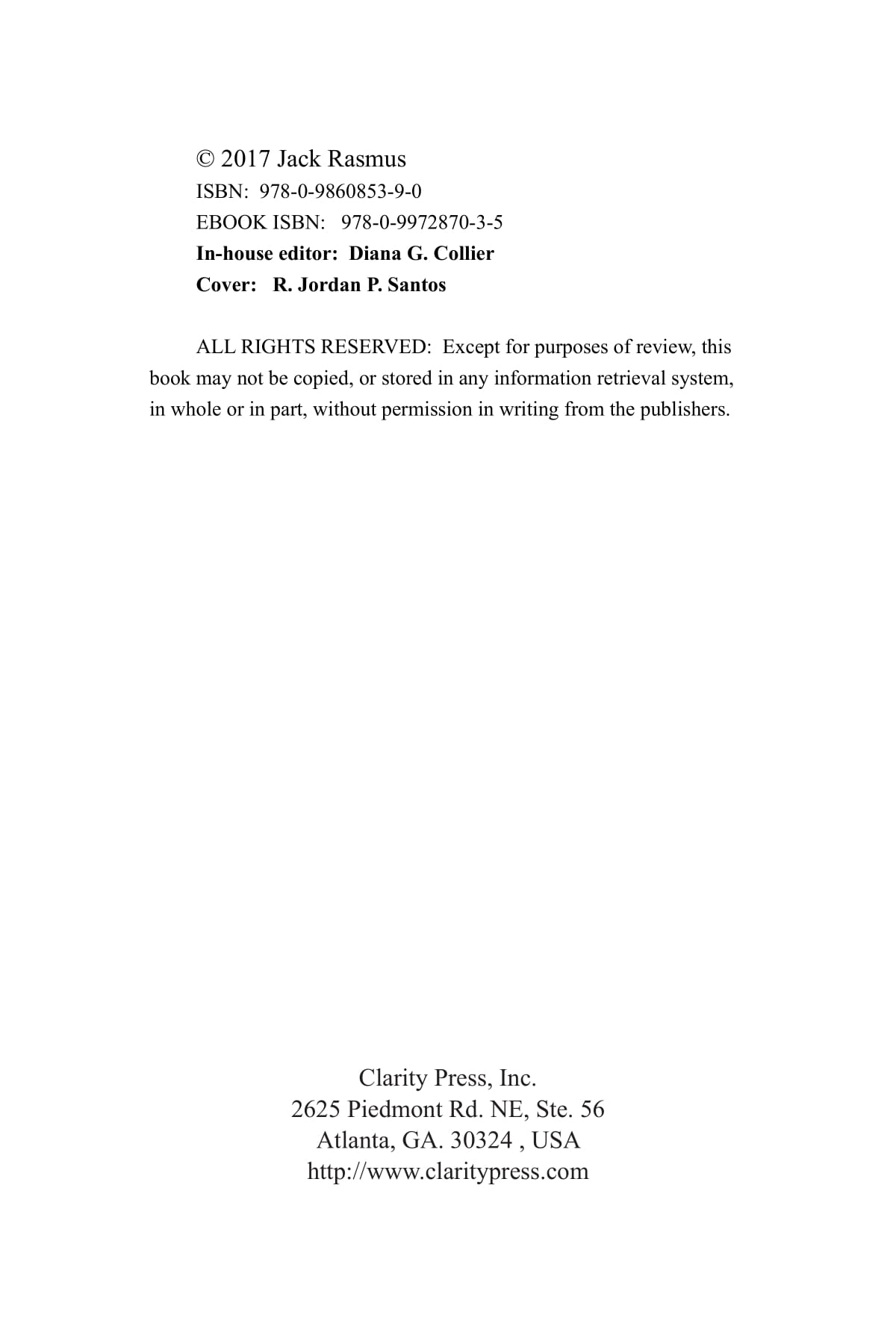 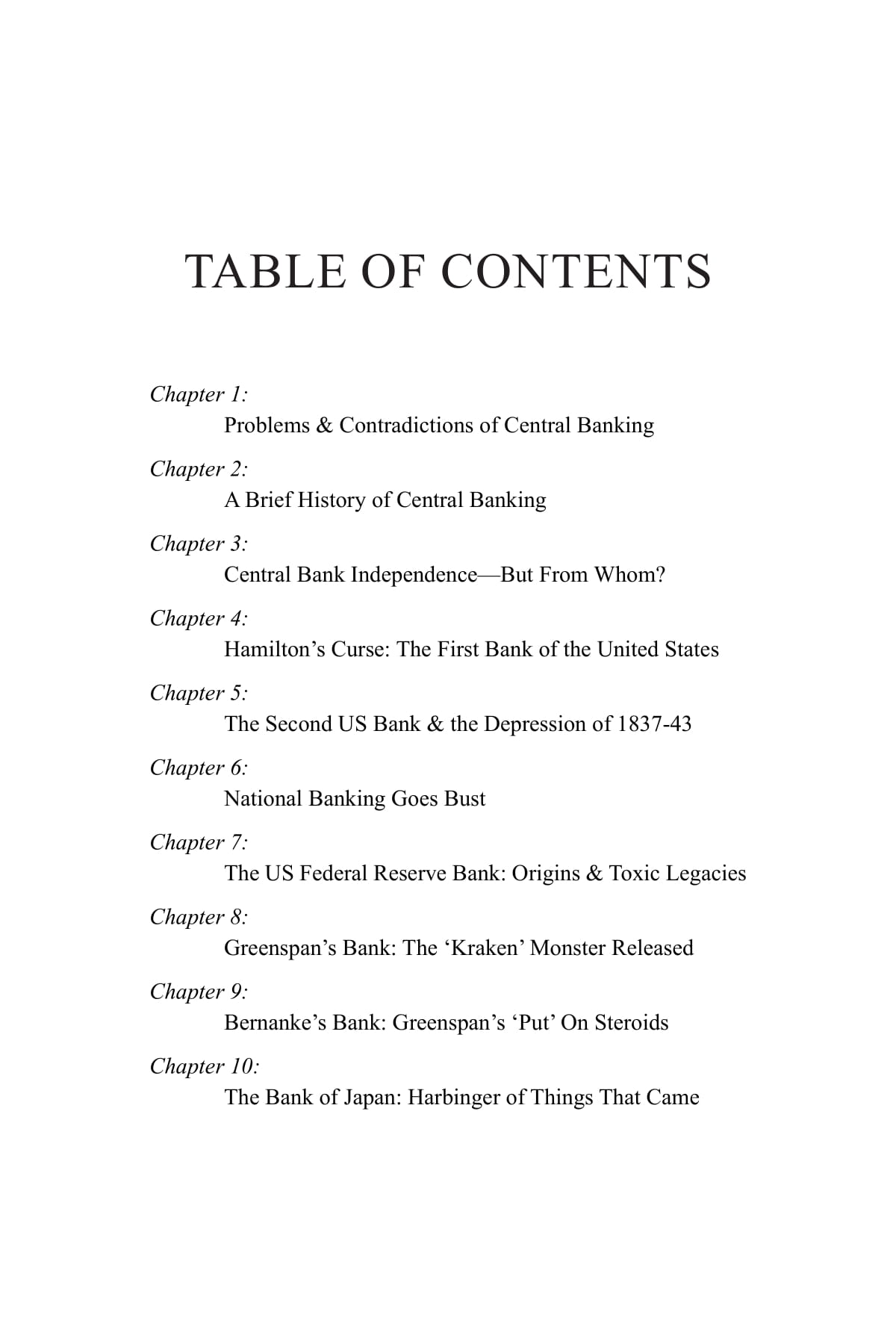 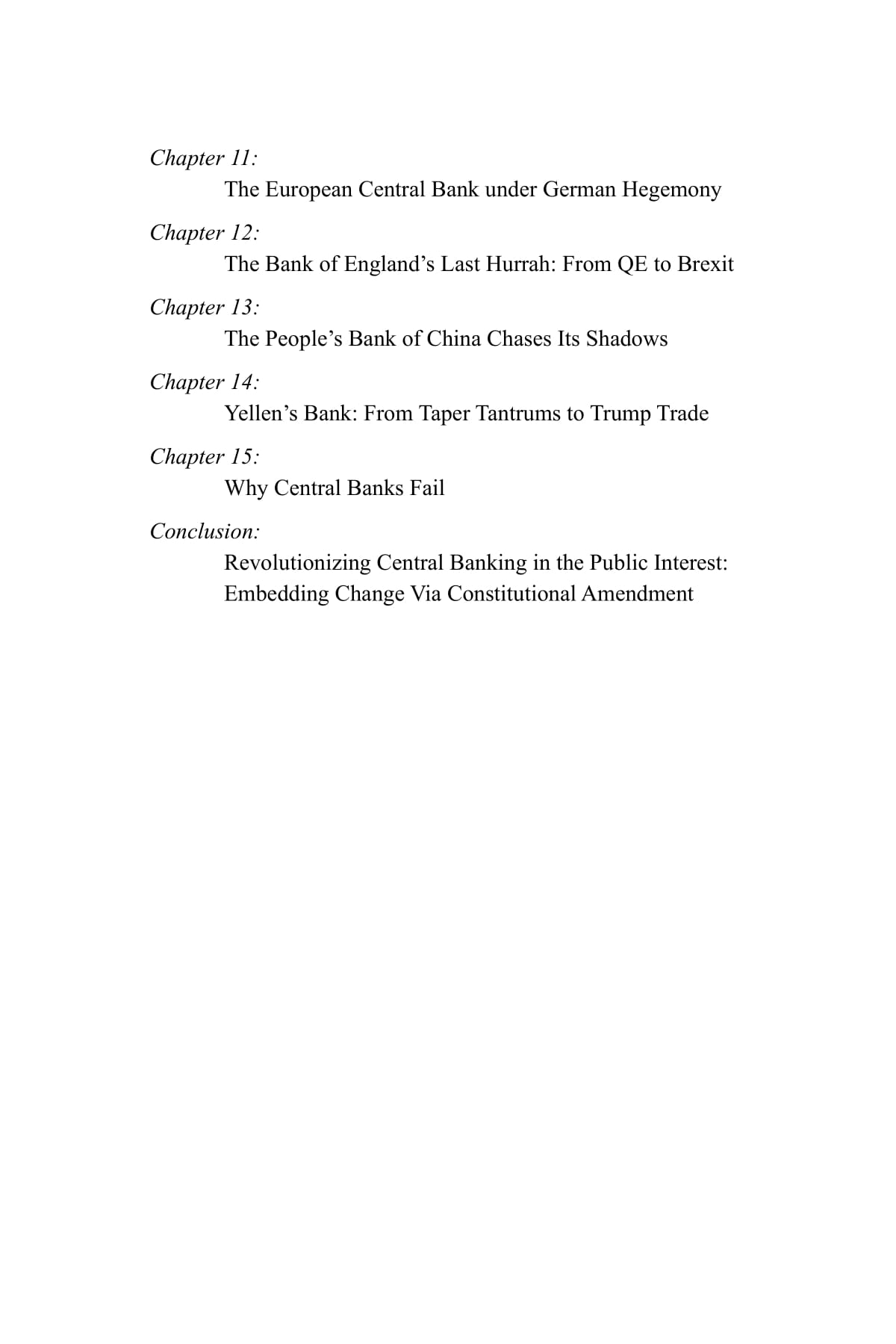 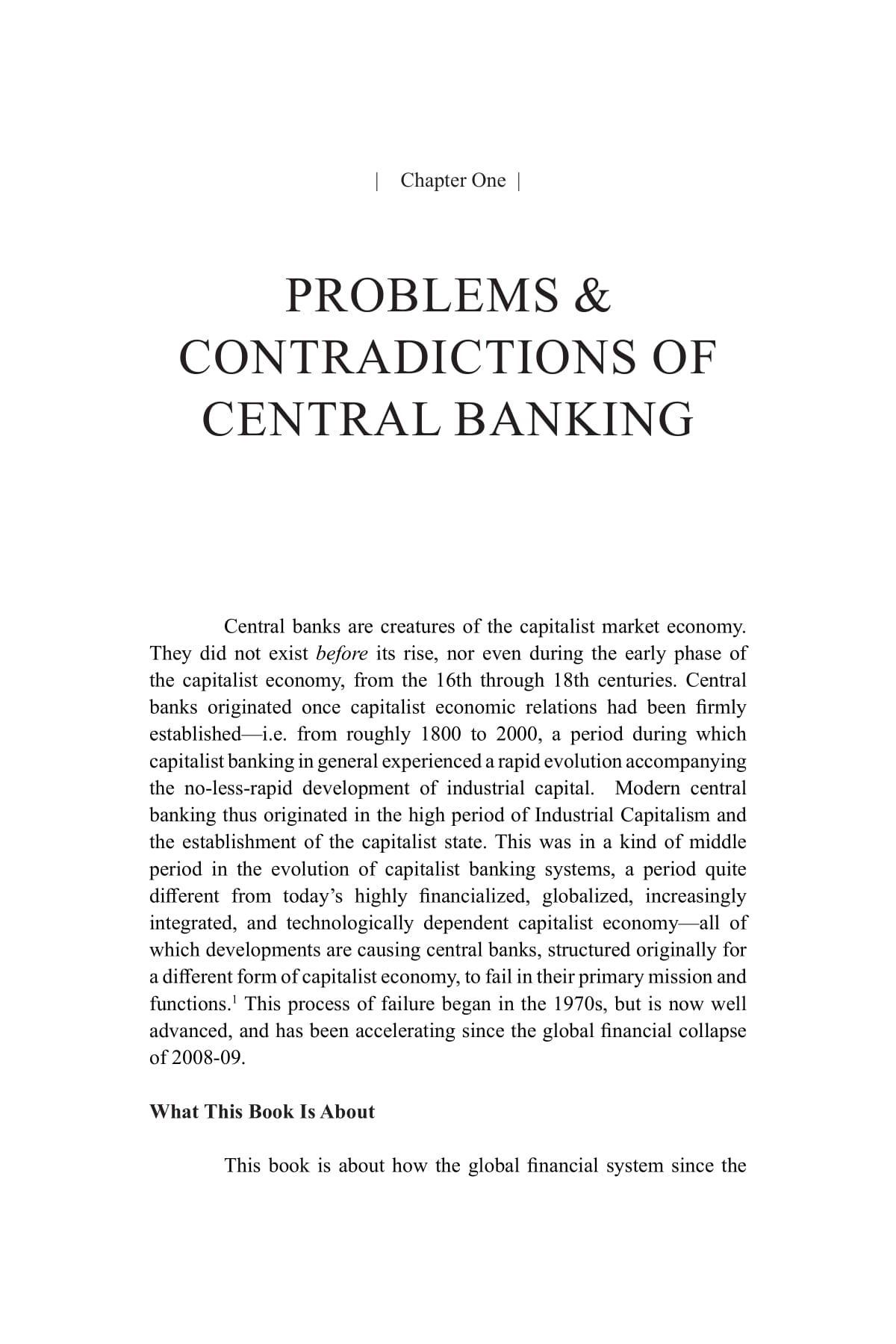 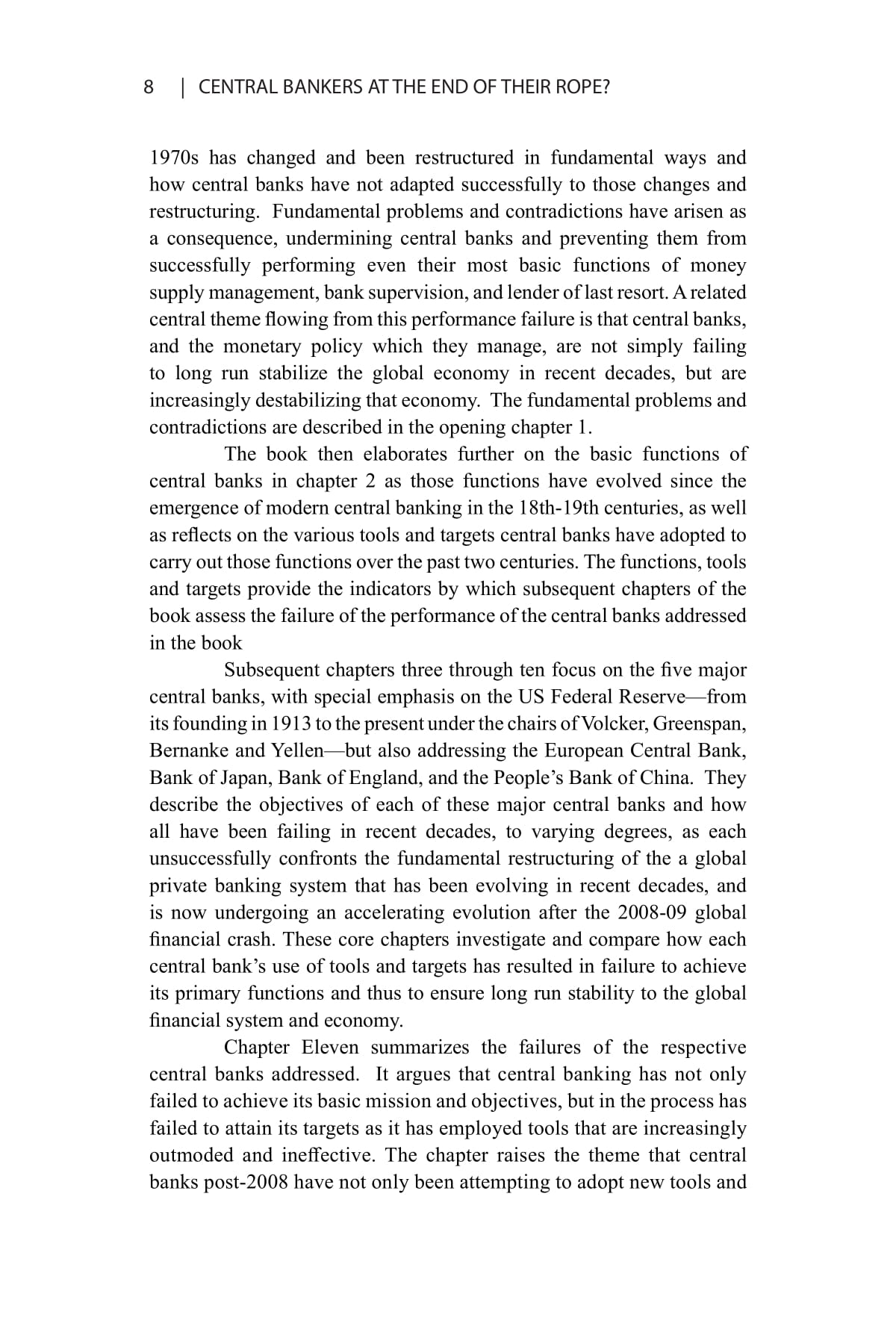 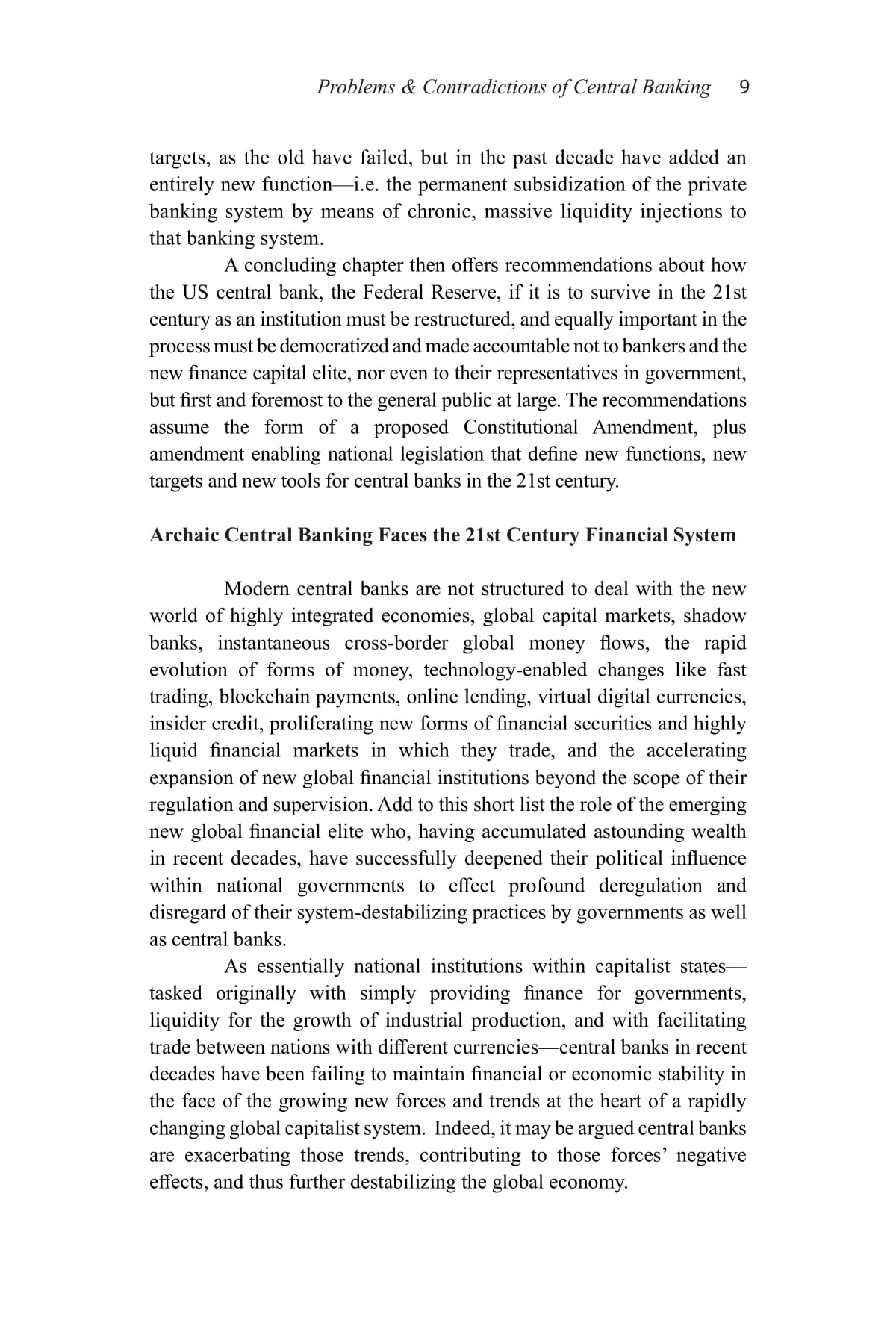 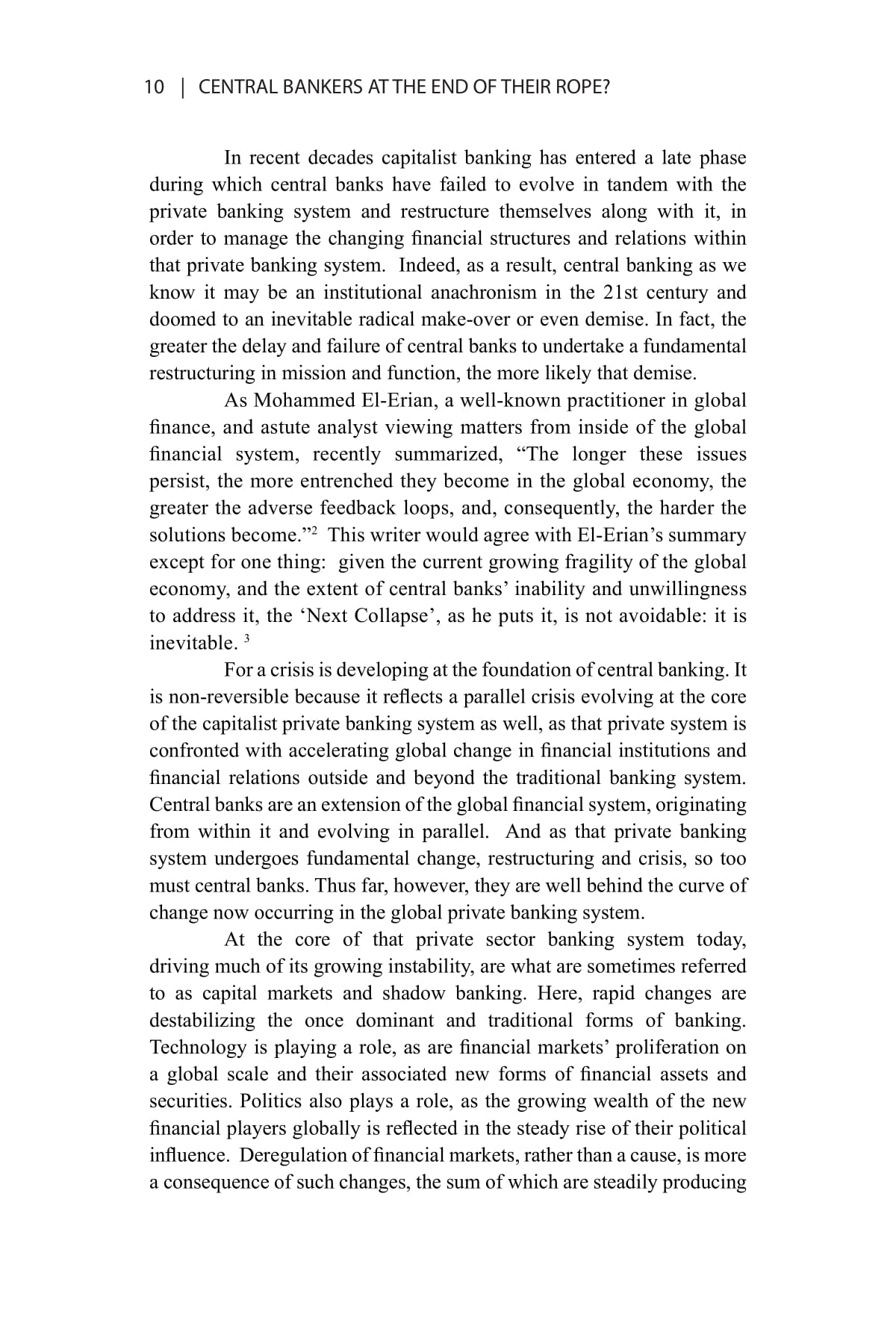 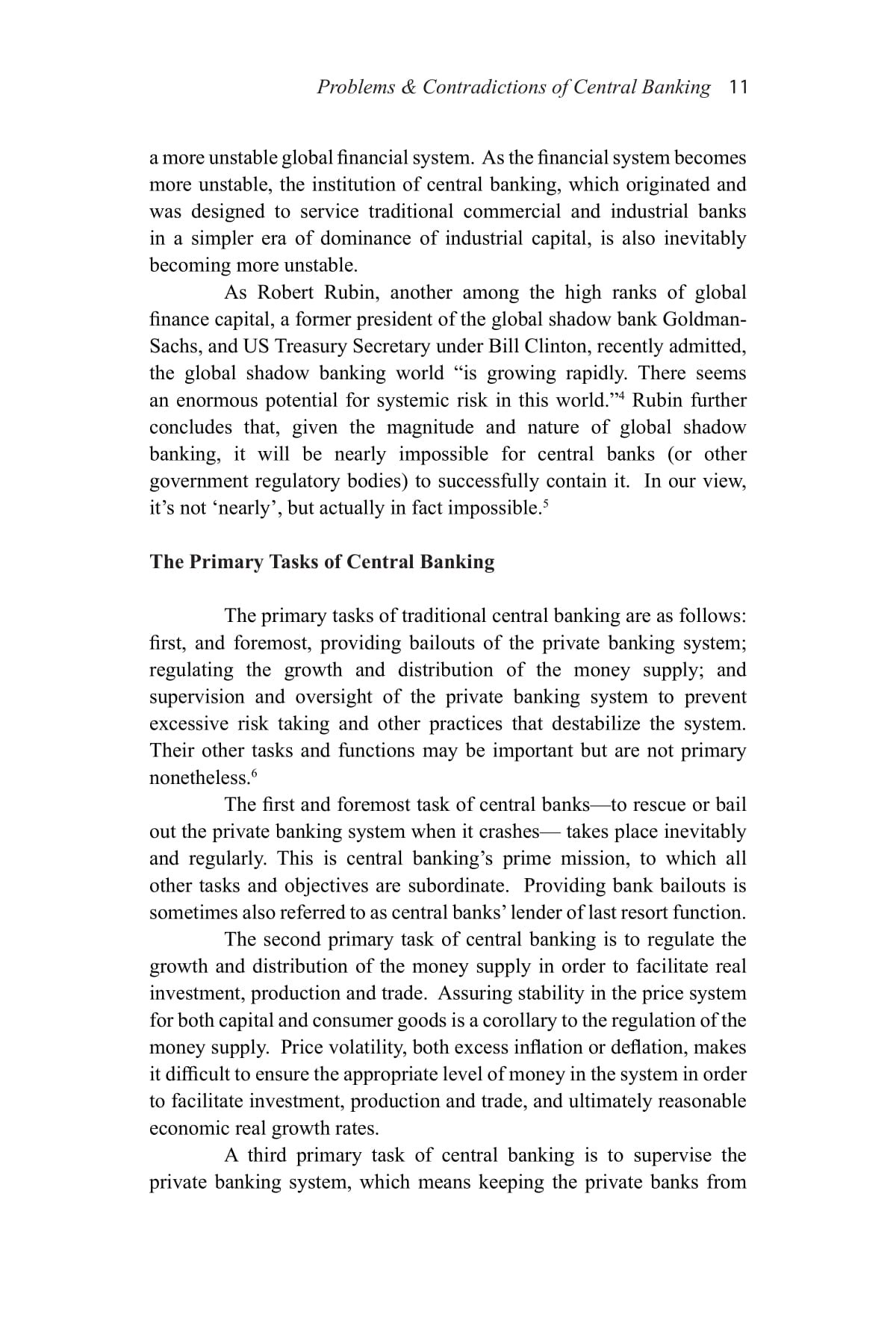 Taking away this central bank artificial subsidization of the private sector, especially the financial side of the private sector, would almost certainly lead to a financial and real collapse of the global economy. It is thus highly unlikely that the Fed, Bank of England, Bank of Japan or European Central Bank will be able any time soon to retreat much from their massive liquidity injections that have been the hallmark of central bank policy since 2008.

“Rasmus documents the ties of the Federal Reserve to Wall Street and demands democratization of central banking with a series of common sense solutions. A great book.  I learned a lot from it.”

LARRY COHEN, Board chair, Our Revolution 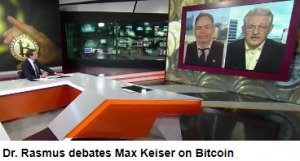 Central banks of the advanced economies—despite having been designated by their respective economic and political elites as their states’ primary economic policy institution—have failed since 2008 to permanently stabilize the world’s banking systems or restore pre-2008 economic growth.

Rather, central bank liquidity injections since the 1970s not only produced the 2008-09 crisis, but they then became the central banks’ solution to that crisis; and now promise to cause of the next one, as a further tens of trillions of dollars of liquidity-enabled debt has since 2008 been piled on the original trillions before 2008.

Fed policy since 2010 has represented an historically unprecedented subsidization of the financial system by the State, implemented via the institutional vehicle of the central bank. Central banks’ function of lender of last resort, originally designed to provide excess liquidity in instances of banking crises, has been transformed into the subsidization of the private banking system, which today is addicted to, and increasingly dependent upon, significant continuing infusions of liquidity by central banks.

Taking away this central bank artificial subsidization of the private sector, especially the financial side of the private sector, would almost certainly lead to a financial and real collapse of the global economy.  It is thus highly unlikely that the Fed, Bank of England, Bank of Japan or European Central Bank will be able any time soon to retreat much from their massive liquidity injections that have been the hallmark of central bank policy since 2008. Nor will they find it possible to raise their interest rates much beyond brief token adjustments.  Nor exit easily from their bloated balance sheets and extraordinary historic policies of liquidity provisioning. That liquidity not only bailed out the banks and financial system in 2007-09, but has been subsidizing the system ever since in order to prevent a re-collapse.

Truly, as this book addresses in painstaking detail, central bankers are at the end of their rope. Wrought by various growing contradictions, central banks, as currently structured, have failed to keep pace with the more rapid restructuring and change in the private capitalist banking system.  As a result, they have been failing to perform effectively even their most basic functions, or to achieve their own declared targets of price stability and employment.

Official excuses for that failure are critiqued and rejected.

Alternative reasons are offered, including:

notions of the mid-20th century that no longer hold true in the 21st—like the Taylor Rule, Phillips curves, and, in the case of ZIRP and NIRP, the idea that the cost of borrowing is what first and foremost determines real investment.

Central banks must undergo fundamental restructuring and change. That restructuring must include the democratization of decision making and a redirecting of central banks toward a greater direct service in the public interest.   A Constitutional Amendment is therefore proposed, along with 20 articles of enabling legislation, addressing what reforms and restructuring of central banks’ decision making processes, tools, targets, functions, as well as their very mission and objectives, are necessary if central banks are to become useful institutions for society in general. The proposed amendment and legislation defines a new mission and general goals for the Fed—as well as new targets, tools and new functions—to create a new kind of public interest Federal Reserve for the 21st century.

2 reviews for CENTRAL BANKERS AT THE END OF THEIR ROPE?: Monetary Policy and the Coming Depression

Stephen Lendman
Quick View
Do NOT follow this link or you will be banned from the site!
X