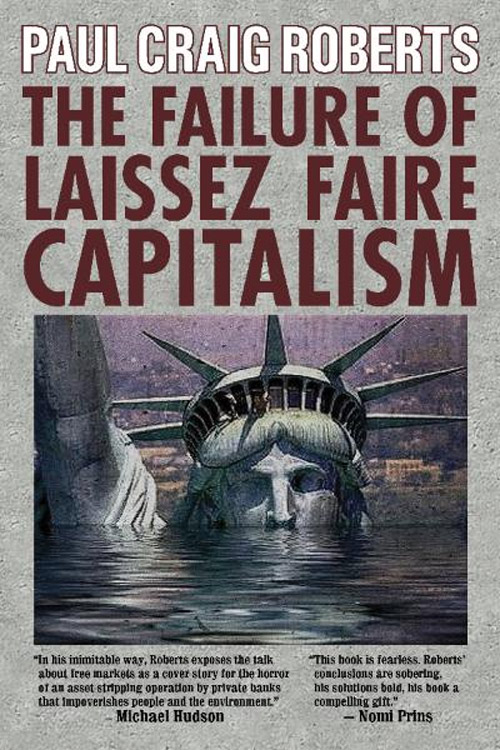 This book is a major challenge both to economic theory and to media explanations of the ongoing 21st century economic crisis. It outlines how the one percent have pulled off an economic and political revolution. By offshoring manufacturing and professional service jobs, US corporations destroyed the growth of consumer income, the basis of the US economy, leaving the bulk of the population mired in debt. Deregulation was used to concentrate income and wealth in fewer hands and in financial corporations “too big to fail.”

“The Failure of Laissez Faire Capitalism is fearless. It transcends Roberts’ illustrious career and prior works of intellectual and practical analysis.”
NOMI PRINS, author of All the Presidents’ Bankers

“In his inimitable way, Roberts describes how the rhetorical patter talk about free-markets is a cover story for the horror of an extractive asset-stripping operation by publicly-supported private banks and the governments that they control that impoverishes people and the environment. He shows that unrealistic assumptions made by free-trade ideologues have led to the “New Dispossession” and a political and economic race to the bottom, applauded as a success story by junk economists, who ignore the reductions in living standards and rise in environmental instability.”  MICHAEL HUDSON

Copy and paste this URL into your WordPress site to embed

Copy and paste this code into your site to embed