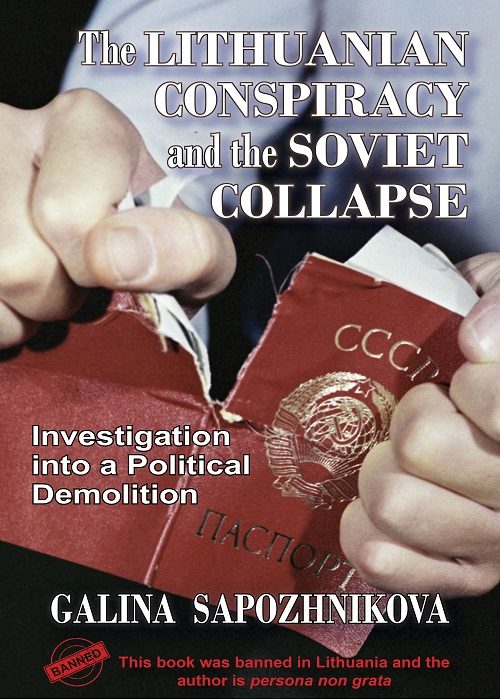 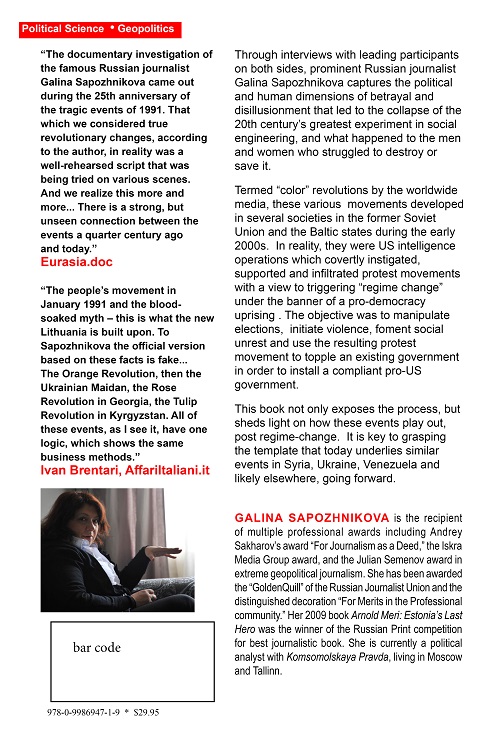 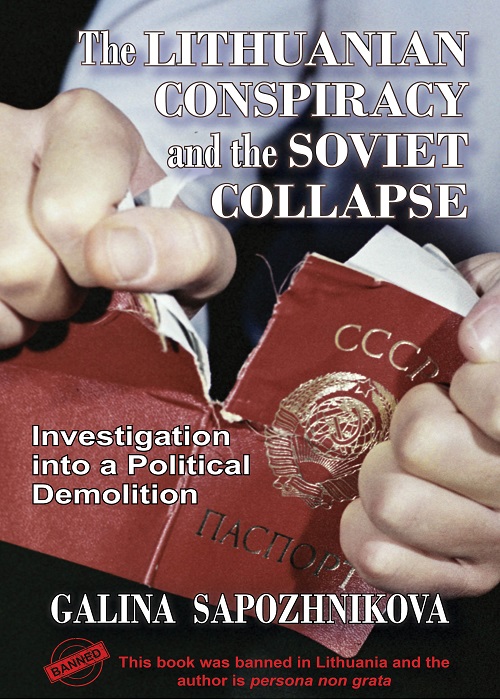 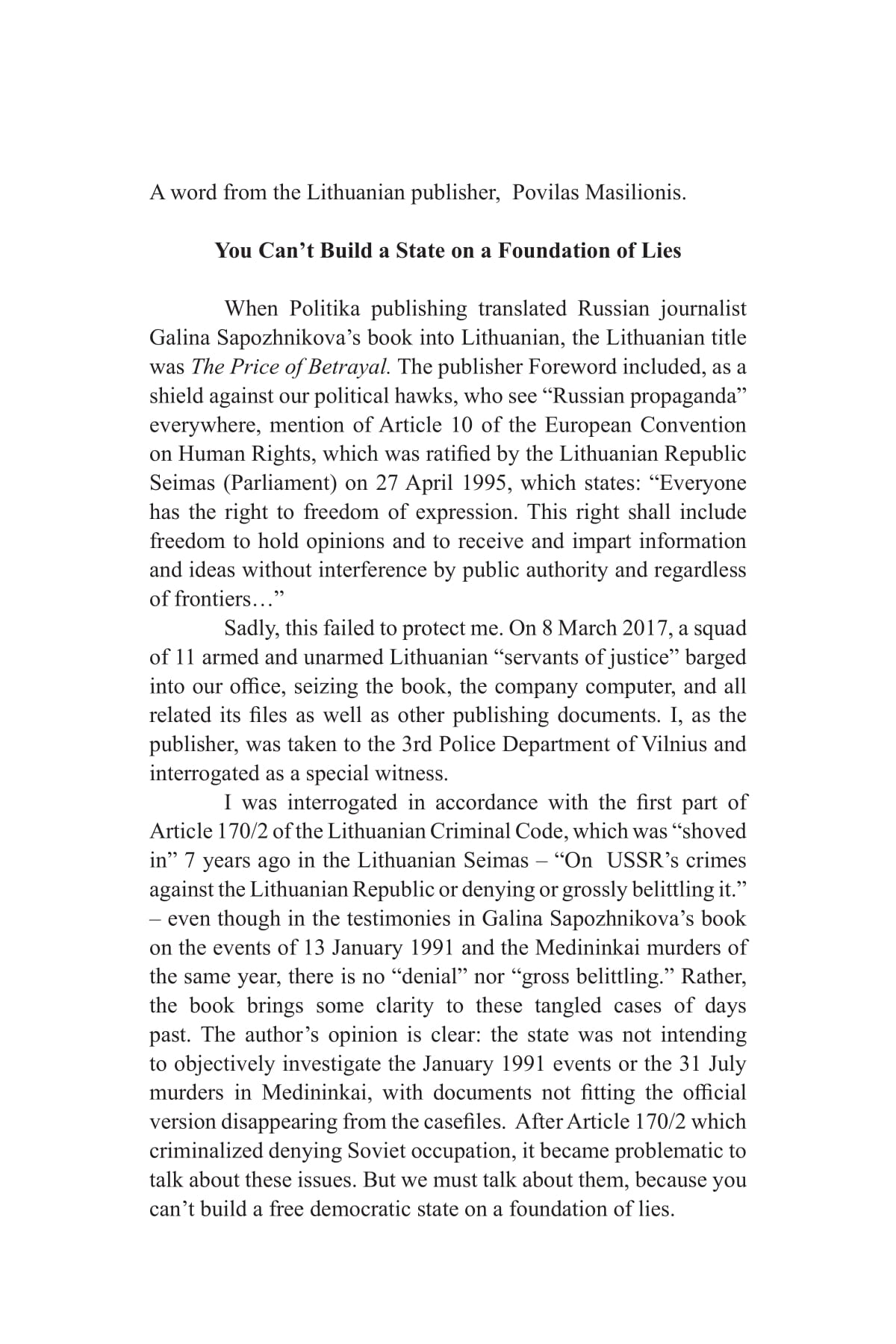 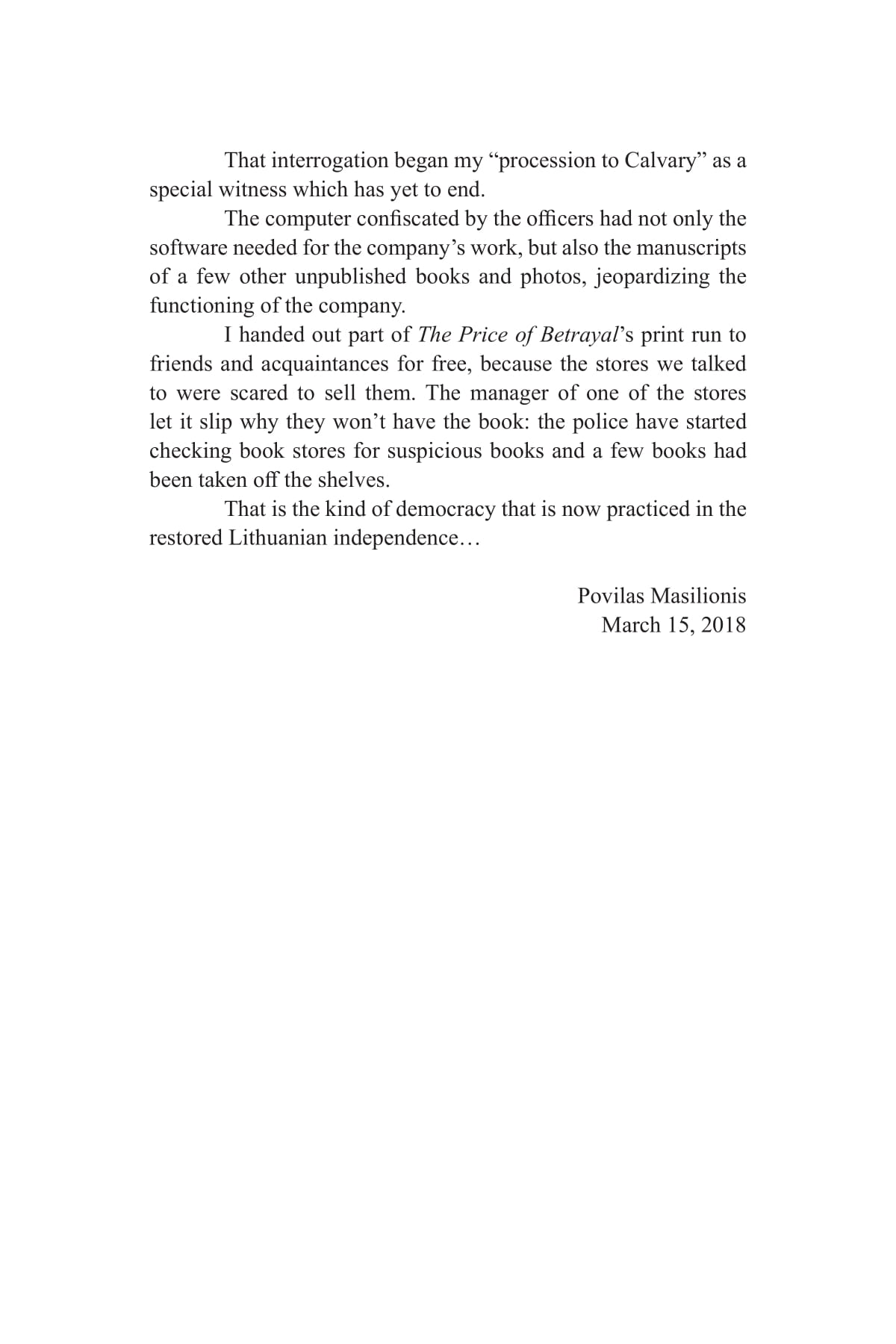 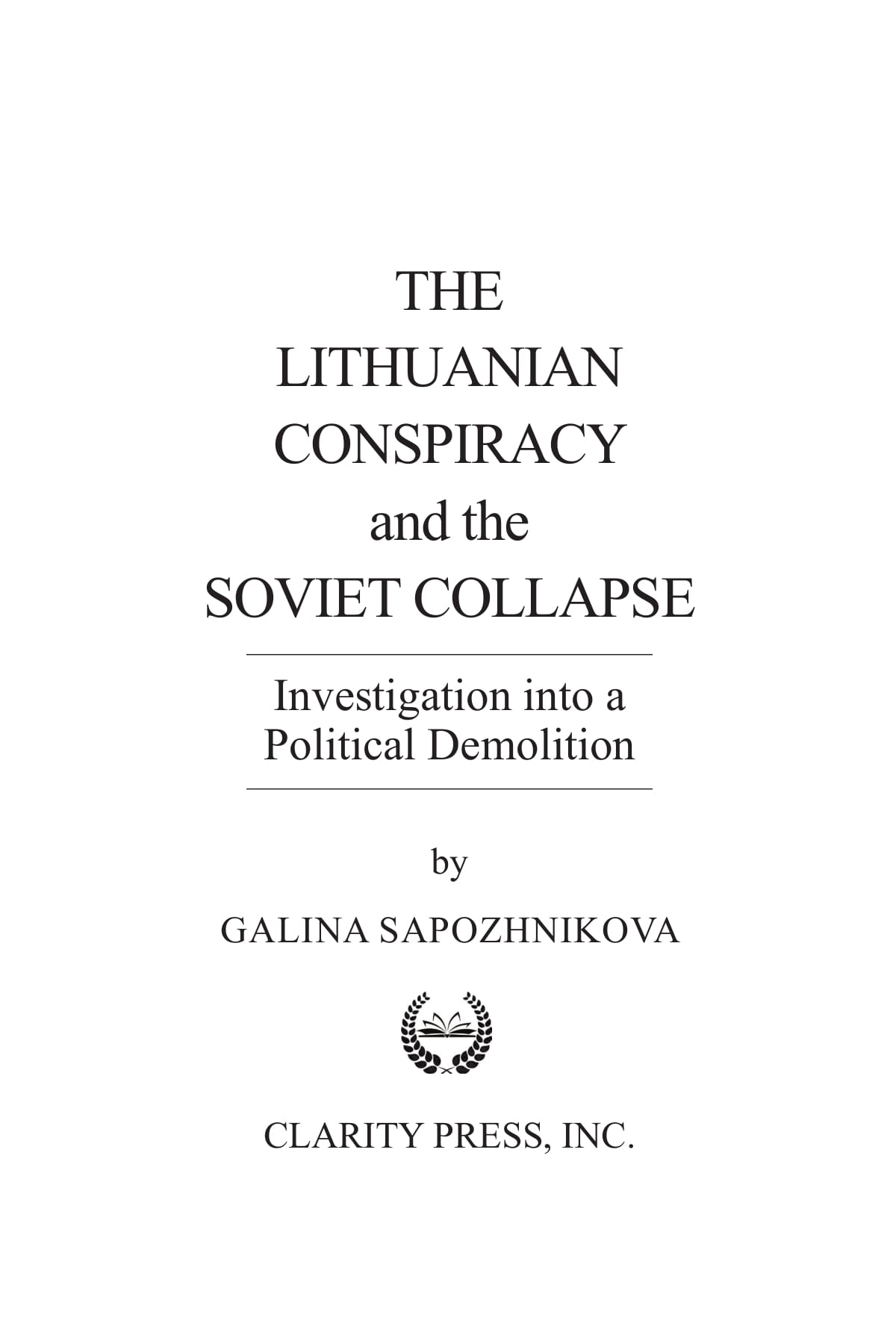 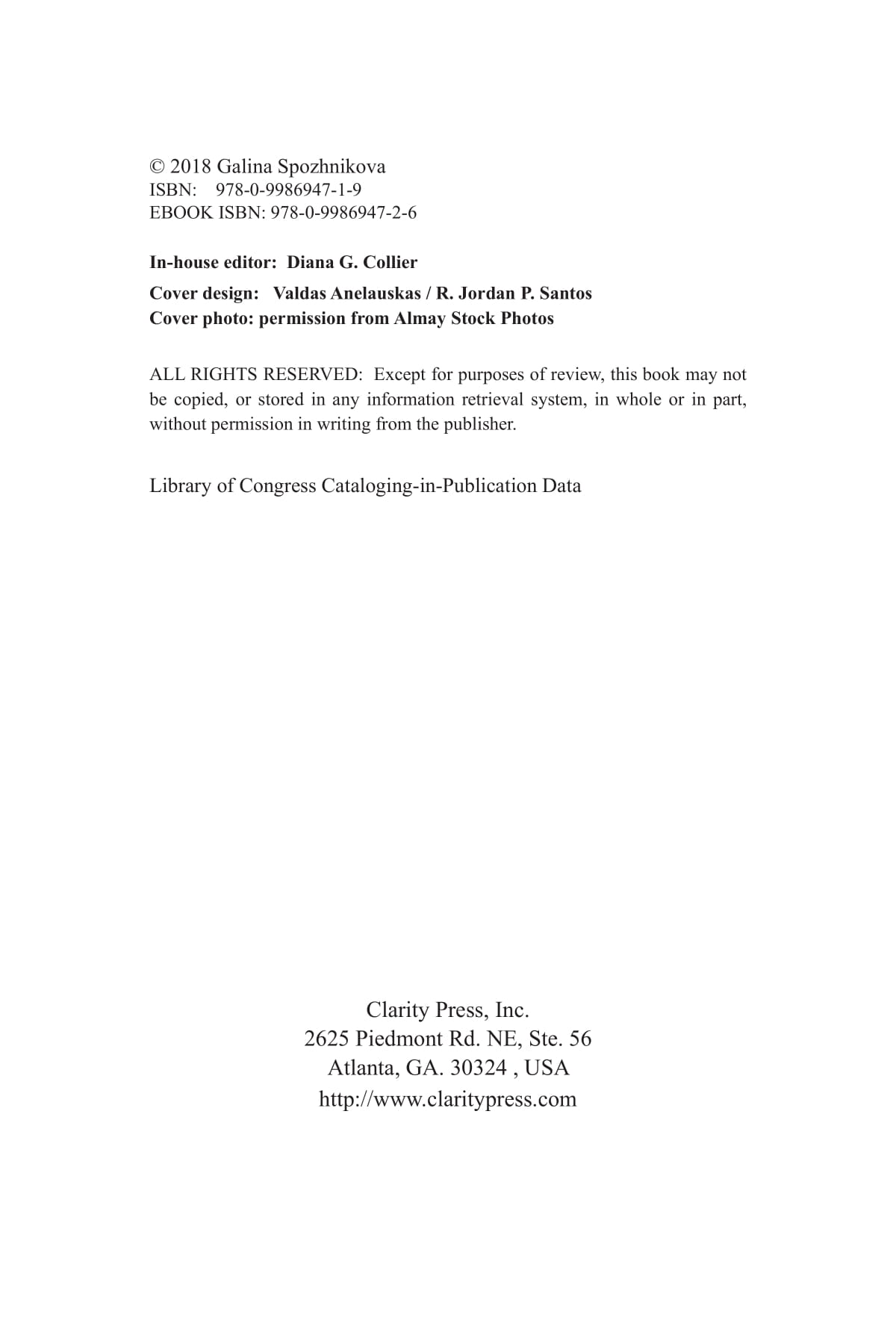 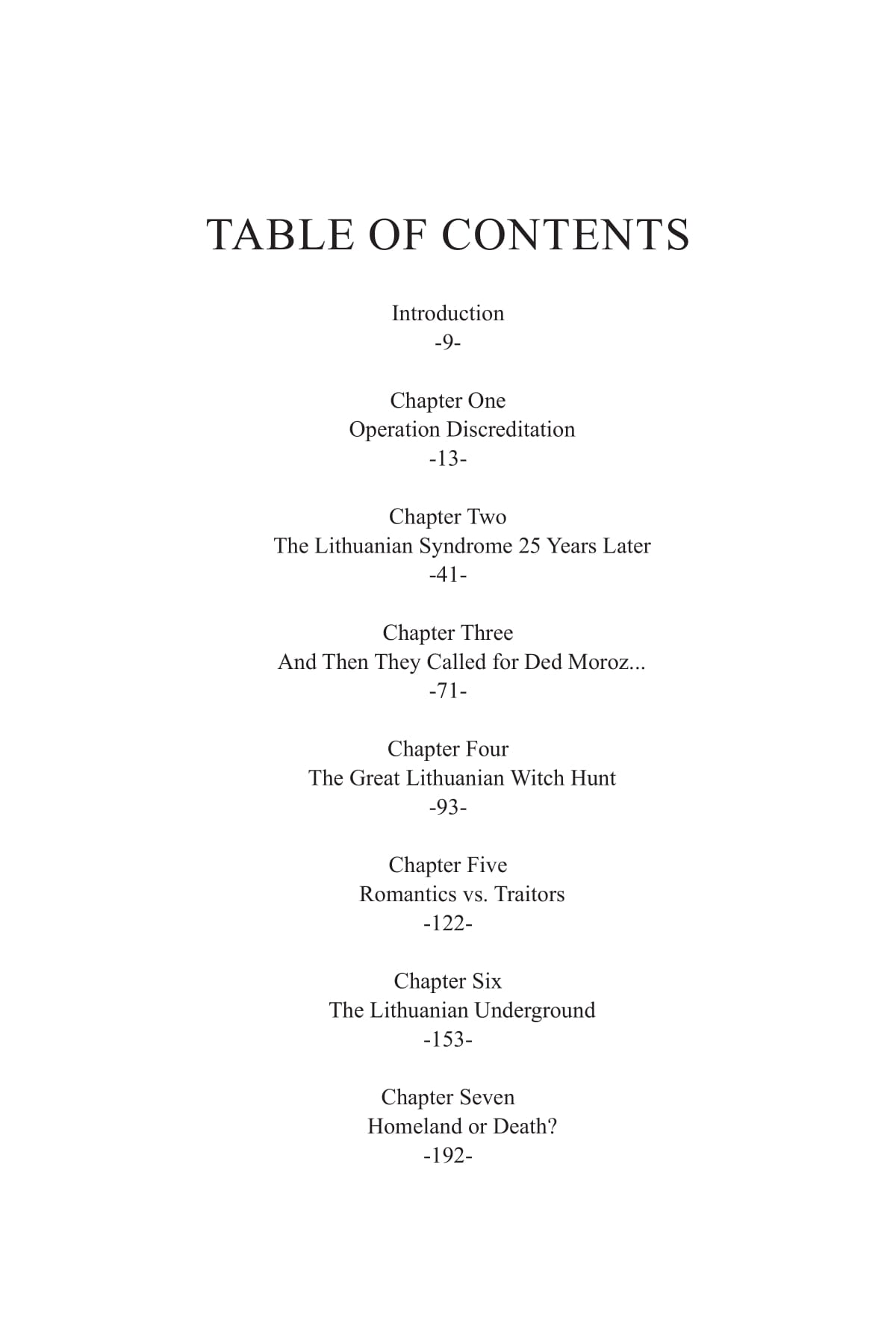 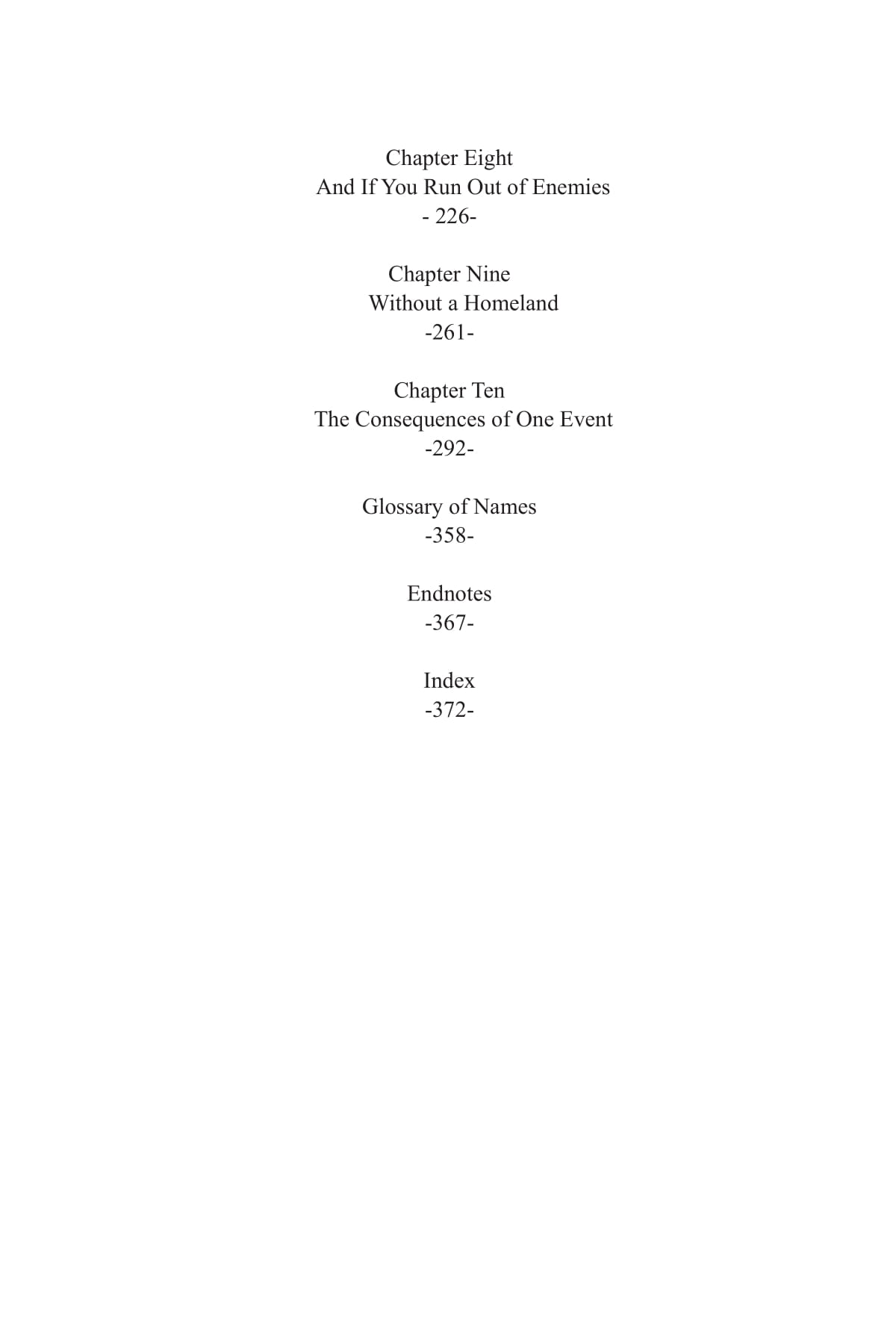 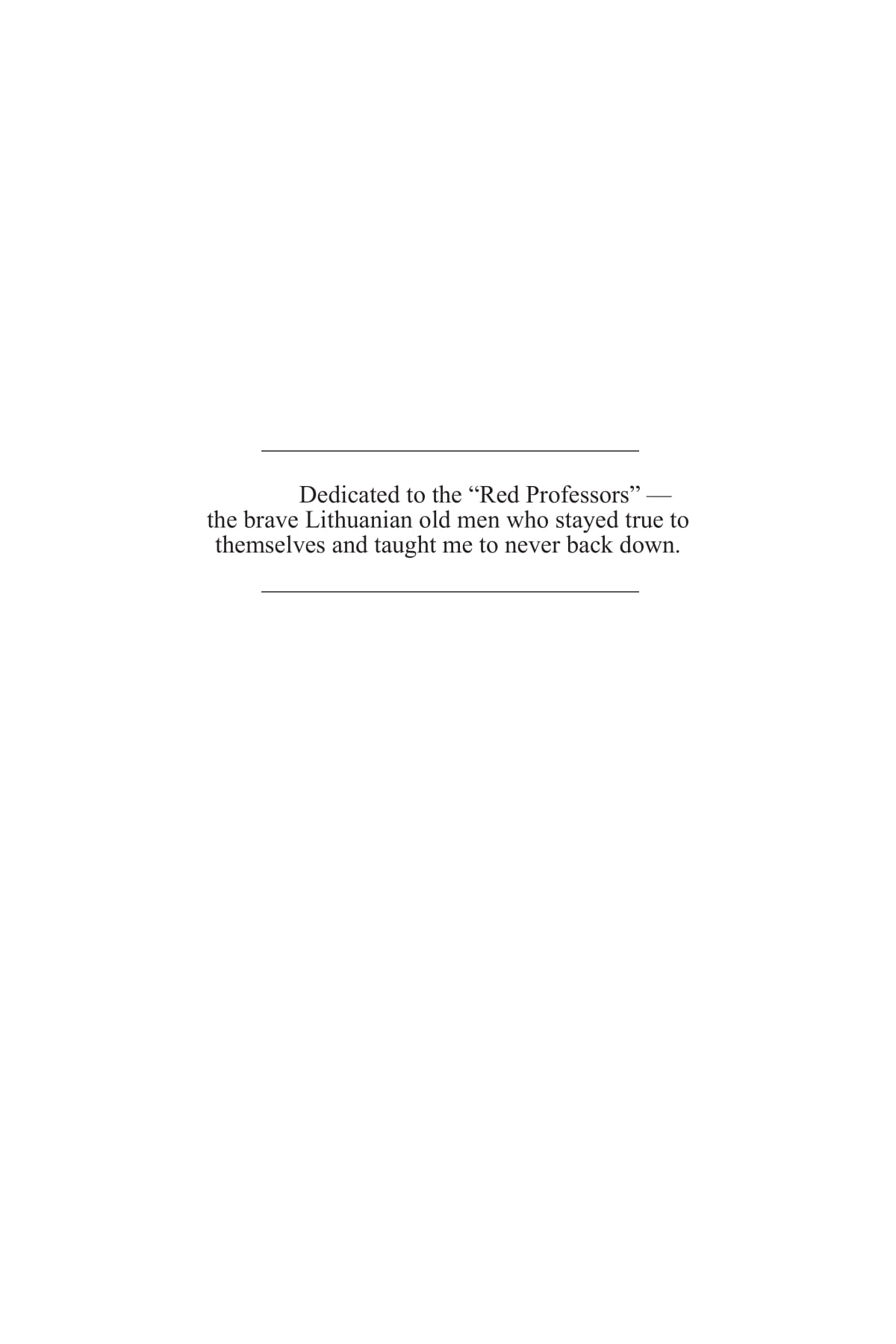 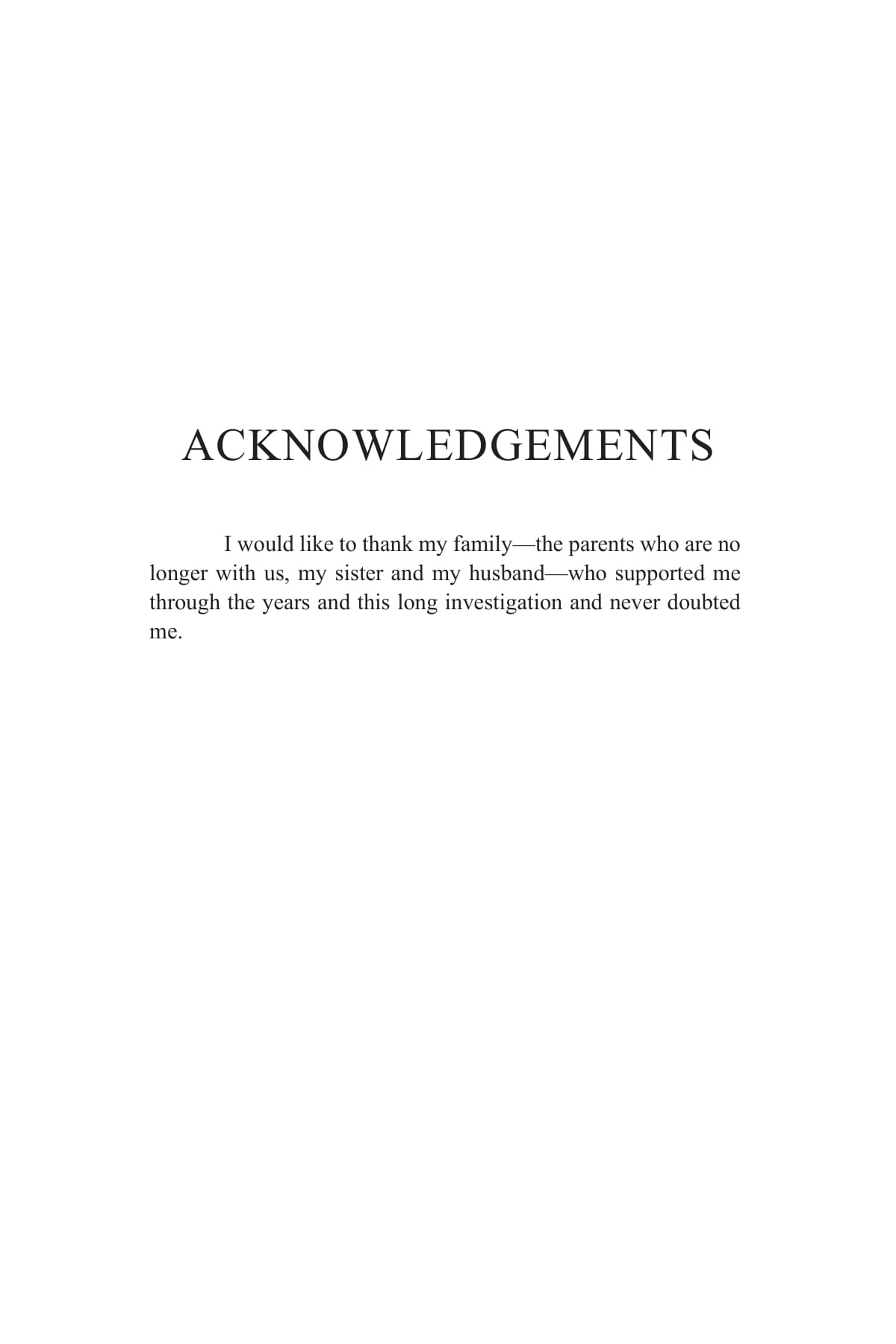 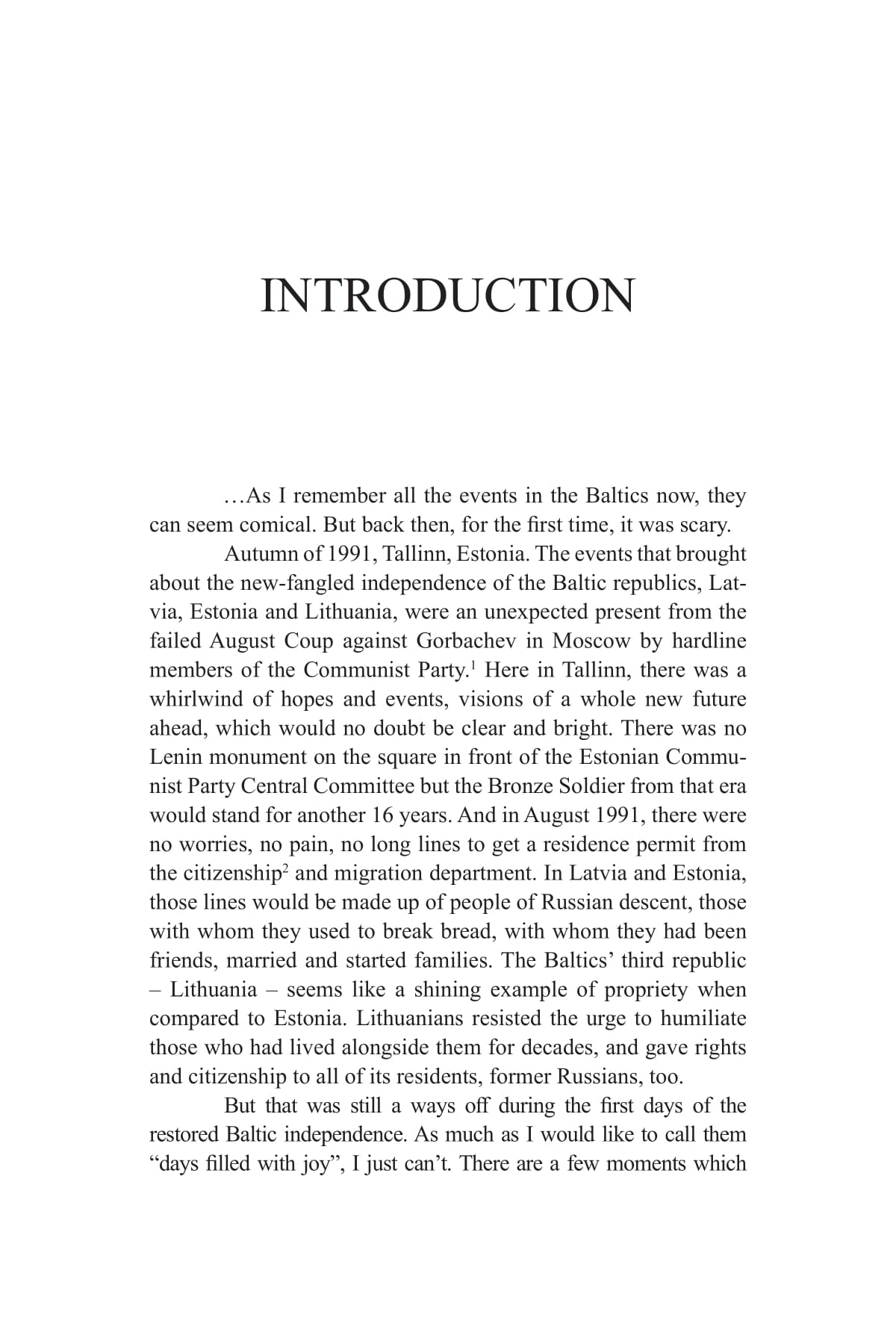 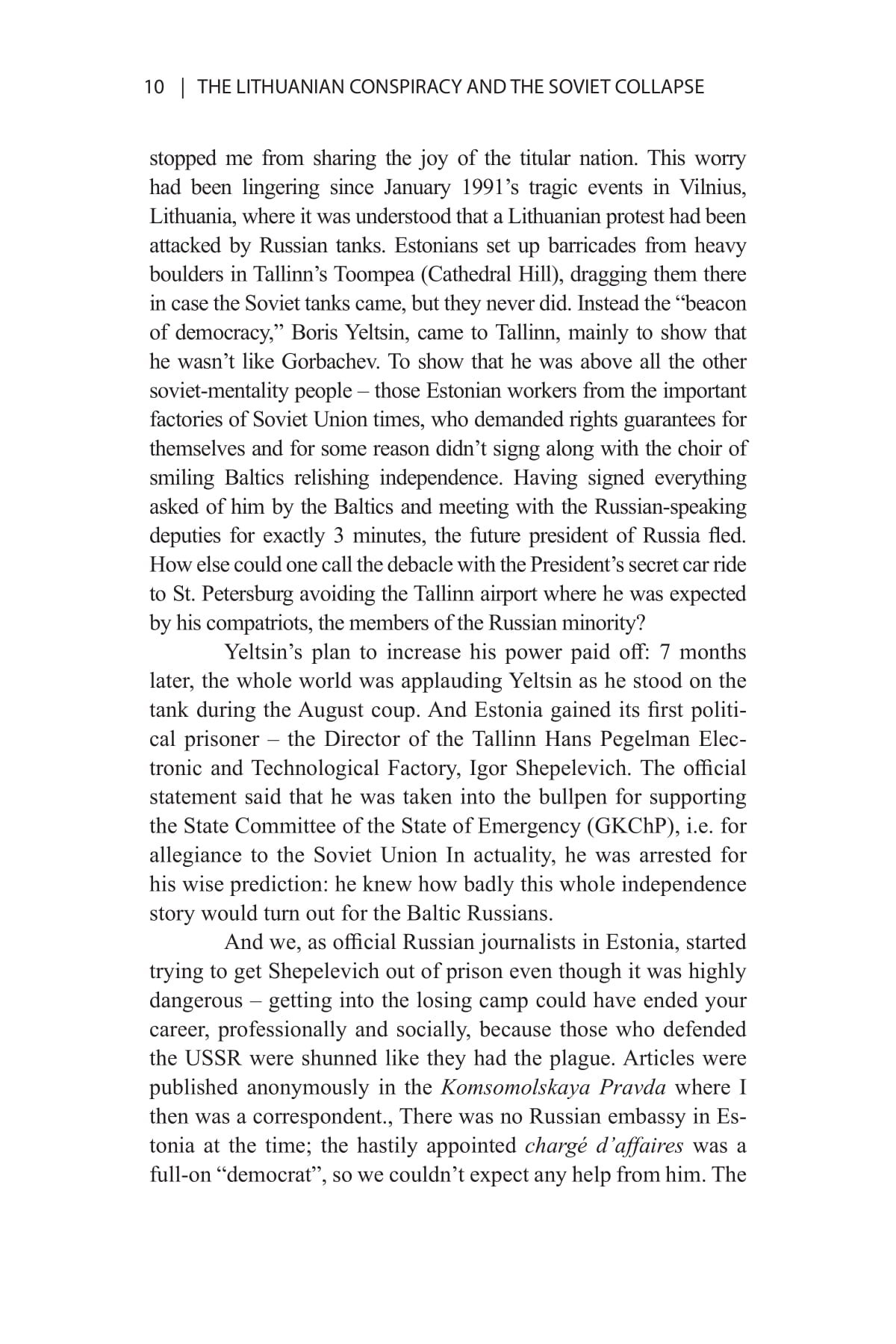 Through interviews with leading participants on both sides, prominent Russian journalist Galina Sapozhnikova captures the political and human dimensions of betrayal and disillusionment that led to the collapse of the 20th century’s greatest experiment in social engineering, and what happened to the men and women who struggled to destroy or save it. She dissects the tactics behind a “pro-democracy” regime change, its wider agenda, and the fallout.

“The documentary investigation of the famous Russian journalist Galina Sapozhnikova came out during the 25th anniversary of the tragic events of 1991. That which we considered true revolutionary changes, according to the author, in reality was a well-rehearsed script that was being tried on various scenes. And we realize this more and more… There is a strong, but unseen connection between the events a quarter century ago and today.” Eurasia.doc 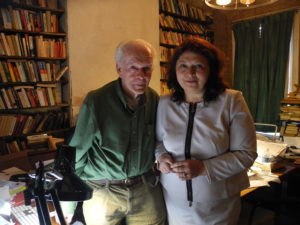 “How could I have fallen for the charm of his mind and not notice the slogan on the Albert Einstein Institution booklet – “Consulting government ministers, MPs and volunteer organizations on the development of nonviolent struggle, like in Lithuania, Latvia, Estonia and Thailand”? Turned out, Professor Sharp had his hands in the Velvet Revolution in Czechoslovakia2 as well as those in the Baltic states, the first color revolutions in the former USSR.” Galina Sapozhnikova

Through interviews with leading participants on both sides, prominent Russian journalist Galina Sapozhnikova captures the political and human dimensions of betrayal and disillusionment that led to the collapse of the 20th century’s greatest experiment in social engineering, and what happened to the men and women who struggled to destroy or save it.

Termed “color” revolutions by the worldwide media as most were designated colors, these various  movements developed in several societies in the former Soviet Union and the Baltic states during the early 2000s.  In reality, they were US intelligence operations which covertly instigated, supported and infiltrated protest movements with a view to triggering “regime change” under the banner of a pro-democracy uprising . The objective was to manipulate elections,  initiate violence, foment social unrest and use the resulting protest movement to topple an existing government in order to install a compliant pro-US government.

What were the many tactics deployed in Lithuania, only now recognized as one of the first, to galvanize the popular uprising?    Was Gorbachev’s role duplicitous and anti-USSR? What was the role of Eugene Sharp in this grand show of historic transformation?  Is nationalism a force to be welcomed or feared?  How did the political shape-shifters act – the former Komsomol and Communist Party executives, who took high posts in the new “democratic” governments? What happened to the pro-democracy forces and to those they defeated in the aftermath? How has all this worked out for Lithuania?

This book not only exposes the process, but sheds light on how these events play out, post regime-change.  It is key to grasping the template that today underlies similar events in Syria, Ukraine, Venezuela and likely elsewhere, going forward. The Lithuanian revolution may be key among them, a trial run for the August coup against Gorbachev in Moscow and the Soviet collapse that changed the course of world history.

To date, The Lithuanian Conspiracy has been published under other titles in Lithuanian, Russian and Italian.

Born in Izhevsk (Russian Federation), Galina Sapozhnikova graduated from the journalism faculty of the Saint Petersburg University in 1988. She worked as a correspondent for Komsomolskaya Pravda covering Estonia, Finland and Sweden. She became known as a master of journalistic investigation, having worked on the mystery of the Estonia ferry sinking, studied xenophobia in Russia, and helped people who lost their memories "find themselves." Galina Sapozhinkova is the recipient of multiple professional awards - the Artyom Borovik award for journalist investigations, Andrey Sakharov's award "For Journalism as a Deed," the Iskra Media Group award, the Julian Semenov award in extreme geopolitical journalism, the Oles Buzina literature and media award. She has been awarded the "Golden Quill" of the Russian Journalist Union and the distinguished decoration "For Merits in the Professional community." Her 2009 book Arnold Meri: Estonia's Last Hero was the winner of the Russian Print competition for best journalistic book. She is currently a political analyst with Komsomolskaya Pravda, living in Moscow and Tallinn.