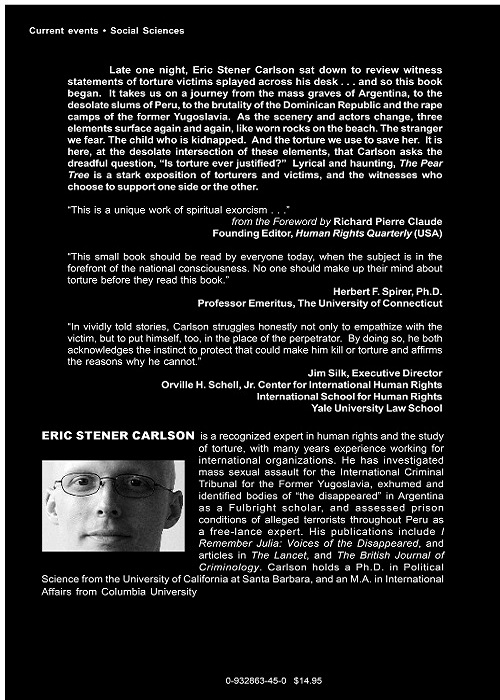 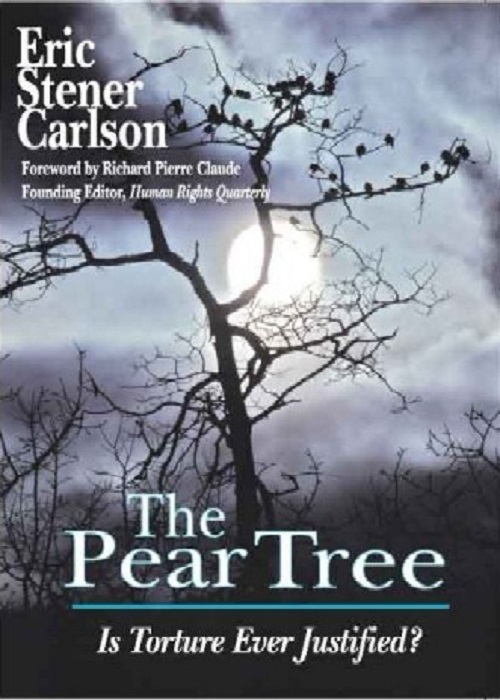 Late one night, Eric Stener Carlson sat down to review witness statements of torture victims splayed across his desk… and so this book began. It takes us on a journey from the mass graves of Argentina, to the desolate slums of Peru, to the brutality of the Dominican Republic and the rape camps of the former Yugoslavia. As the scenery and actors change, three elements surface again and again, like worn rocks on the beach. The stranger we fear. The child who is kidnapped. And the torture used to save her. It is here, at the desolate intersection of these elements, that Carlson asks the dreadful question, “Is torture ever justified?” Lyrical and haunting, The Pear Tree is a stark exposition of torturers and victims, and the witnesses who choose to support one side or the other.

“We rarely get to hear of torture from the spectator, who lives, in some cases, on the periphery and, yet, may be the apparent beneficiary. Eric Carlson knows both the horror and comfort afforded by torture but must always live with the doubt that it gives the wrong answer. This small book should be read by everyone today, when the subject is in the forefront of the national consciousness. No one should make up their mind about torture before they read this book.”
Herbert F. Spirer, Ph.D. Professor Emeritus, The University of Connecticut, Former Adjunct Professor of Intern’l Affairs, Columbia University

“In The Pear Tree, Eric Stener Carlson weaves an account of the rapes and other cruelty he documented for his work at the International Criminal Tribunal for the Former Yugoslavia, and the evidence of brutality he has confronted in Argentina and Peru, with his own memories — of childhood fears and his uncomfortable gratitude for a powerful adult whose hidden and unknown acts had protected him and his town from the danger of a local menace. His exploration aims to shrink the distance between him and the atrocities he studies, to defend against the numbness of the professional observer. In vividly told stories, he struggles honestly not only to empathize with the victim, but to put himself, too, in the place of the perpetrator. By doing so, he both acknowledges the instinct to protect that could make him kill or torture and affirms the reasons why he cannot.”
Jim Silk, Executive Director, Orville H. Schell, Jr. Center for International Human Rights, Yale Law School

ERIC STENER CARLSON is a recognized expert in human rights and the study of torture, with many years experience working for international organizations. He has investigated mass sexual assault for the International Criminal Tribunal for the Former Yugoslavia, exhumed and identified bodies of “the disappeared” in Argentina as a Fulbright scholar, and assessed prison conditions of alleged terrorists throughout Peru as a free-lance expert. His publications include I Remember Julia: Voices of the Disappeared, and articles in The Lancet, and The British Journal of Criminology. Carlson holds a Ph.D. in Political Science from the University of California at Santa Barbara, and an M.A. in International Affairs from Columbia University.