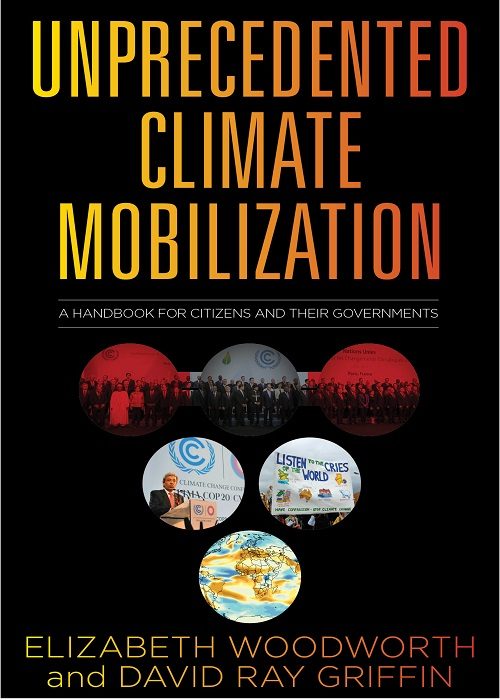 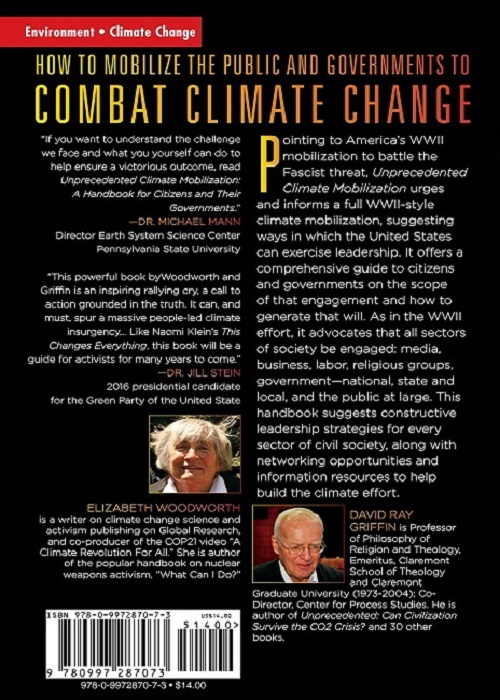 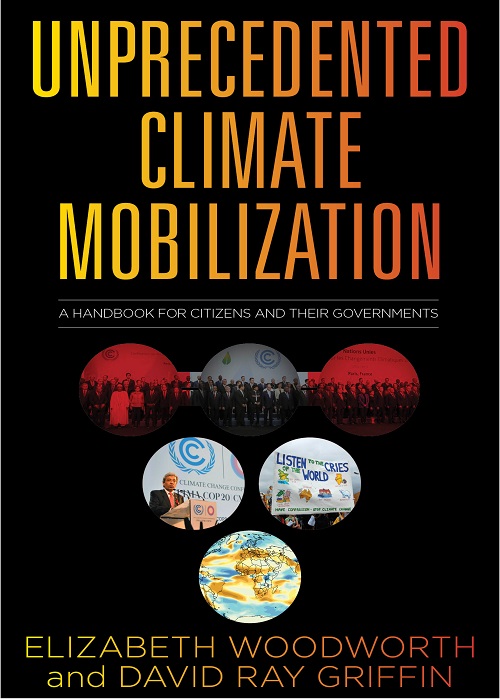 “This powerful book by Woodworth and Griffin is an inspiring rallying cry, a call to action grounded in the truth. It can, and must, spur a massive people-led climate insurgency…  Like Naomi Klein’s This Changes Everything, this book will be a guide for activists for many years to come.”
—DR. JILL STEIN, 2016 Green Party Presidential Candidate

“Like world wars past, our only option is to mobilize and draw upon every tool at our disposal—in this case, to achieve no less than the decarbonization of the global economy. If you want to understand the challenge we face and what you yourself can do to help insure a victorious outcome, read Unprecedented Climate Mobilization: A Handbook for Citizens and Their Governments.”
—DR. MICHAEL MANN, Professor of Meteorology and Director, Earth System Science Center, Pennsylvania State  University

It is now widely recognized that global warming poses an existential threat to the world as serious as nuclear war. And yet, despite the urgency, despite UN engagement, governments have not stepped up to the plate.  The world desperately needs a deeply committed leadership and program of action to deal with climate change. The global public’s growing presentiment of the horrific impact of global warming has enormous potential to shift it into “emergency mode.”

In this context, pointing to America’s WWII mobilization to battle the Fascist threat, Unprecedented Climate Mobilization urges and informs a full WWII-style climate mobilization, suggesting ways in which the United States can exercise leadership.

This book shows how the American people have historically risen and adapted to “long emergencies”, demonstrated in particular by President Roosevelt’s ability to mobilize Americans a full two years before the United States declared war on Japan and Germany in December, 1941. Then, as an example of what is possible, US automakers became a cornerstone of the war effort; having built three million cars in 1941 they quickly converted their factories to making tanks and airplanes, producing only 139 passenger vehicles until the war ended in 1945.

Today, a similar sweeping conversion of America’s outdated energy system to clean energy could take place, if the political will were there.

Unprecedented Climate Mobilization offers a comprehensive guide to citizens and governments on the scope of that engagement and how to generate that will.  As in the WWII effort, it advocates that all sectors of society be engaged:  media, business, labor, religious groups, government—national, state and local, and the public at large. This handbook suggests constructive leadership strategies for every sector of civil society, along with networking opportunities and information resources to help build the climate effort.

This handbook also surveys the arts of civil disobedience and nonviolent action to assemble the effective tools that civil society will need—the kinds of tools that won civil rights, brought an end to the Vietnam War, served in anti-nuclear campaigns—and that have been updated by more recent movements such as Occupy.  Not least, it suggests ways in which activists can maximize personal influence by using Twitter, Facebook and other social media—tools now so powerful that governments and news agencies monitor and carefully analyze their posts and tweet streams.

No environmental advocacy group should be without this effective guide to climate action.

Elizabeth Woodworth is highly enaged in climate change science and activism, publishing on Global Research, co-author of Unprecedented Climate Mobilization, and co-producer of the COP21 video “A Climate Revolution For All.” She is author of the popular handbook on nuclear weapons activism, “What Can I Do?” and the novel, The November Deep. For 25 years, she served as head medical librarian for the BC Government. She holds a BA from Queen's and a Library Sciences Degree from UBC.