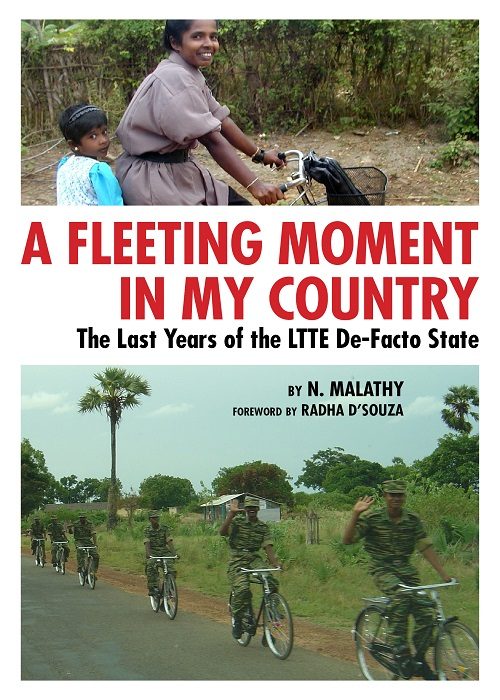 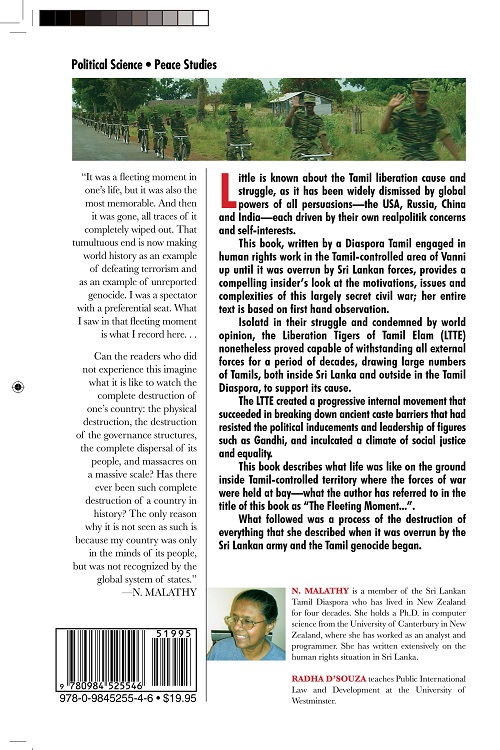 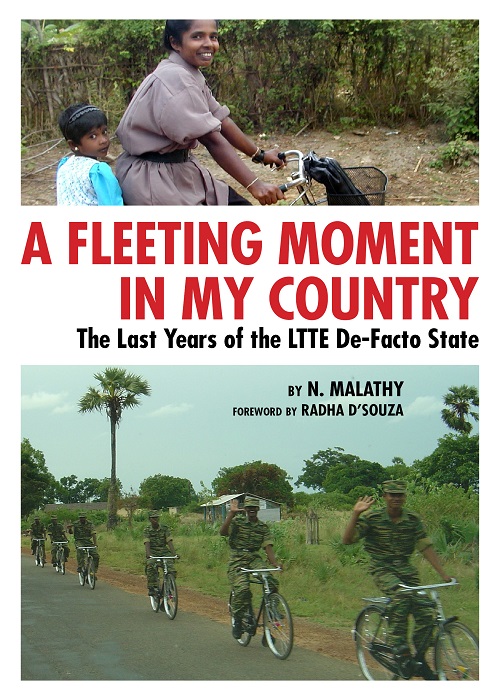 This book describes what life was like on the ground inside Tamil-controlled territory where the forces of war were held at bay—what the author has referred to in the title of this book as “The Fleeting Moment…”.

What followed was a process of the destruction of everything that she described when it was overrun by the Sri Lankan army and the Tamil genocide began.

Little is known about the Tamil liberation cause and struggle, as it has been widely dismissed by global powers of all persuasions—the USA, Russia, China and India—each driven by their own realpolitik concerns and self-interests. This book, written by a Diaspora Tamil engaged in human rights work in the Tamil-controlled area of Vanni up until it was overrun by Sri Lankan forces, provides a compelling insider’s look at the motivations, issues and complexities of this largely secret civil war; the entire text is based on first hand observation and includes sociological insights based on these first hand observations.

Isolated in their struggle and condemned by world opinion, the Liberation Tigers of Tamil Elam (LTTE) nonetheless proved capable of withstanding all external forces for a period of decades, drawing large numbers of Tamils, both inside Sri Lanka and outside in the Tamil Diaspora, to support its cause.

The LTTE created a progressive internal movement that succeeded in breaking down ancient caste barriers that had resisted the political inducements and leadership of figures such as Gandhi, and inculcated a climate of social justice and equality.

This book describes what life was like on the ground inside Tamil-controlled territory where the forces of war were held at bay—what the author has referred to in the title of this book as “The Fleeting Moment…”.

What followed was a process of the destruction of everything that she described when it was overrun by the Sri Lankan army and the Tamil genocide began.

N. Malathy is member of the Sri Lankan Tamil Diaspora and a naturalised New Zealand citizen who has lived in New Zealand for four decades. She holds a Ph.D. in computer science from the University of Canterbury in New Zealand, where she has worked as an analyst and programmer. She has written extensively on the human rights situation in Sri Lanka and also translated a short novel set in the Vanni context which has been accepted for publication by Penguin India. She spent four years in Sri Lanka, in the Vanni District under the control of the Liberation Tigers of Tamil Elam (LTTE), from 2005 till 2009, a period marked by the gradual weakening of the 2002 Norwegian brokered ceasefire, which eventually led to the brutal war in which LTTE was defeated and its leadership killed or imprisoned. During this period she worked in many institutions, including a human rights body, a women’s organization, and an orphanage. Her experiences spanned working with LTTE to release child soldiers, preparing documentation for peace talks for the same body, documenting human rights violations by the Sri Lankan military and working on a project to raise awareness of domestic violence.
Radha d’Souza (LLB (University of Mumbai) and PhD (Geography and Law, University of Auckland). practiced as a barrister in the High Court of Bombay and taught at the Universities of Auckland and Waikato in New Zealand and presently teaches Public International Law and Development at the University of Westminster

Francis A. Boyle
Quick View
Do NOT follow this link or you will be banned from the site!
X