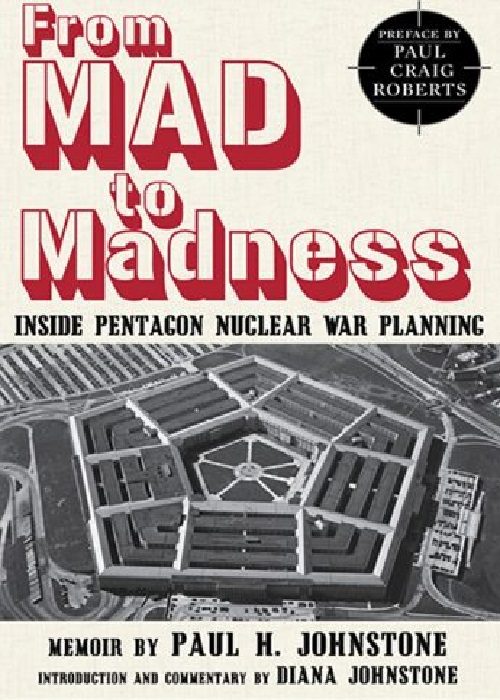 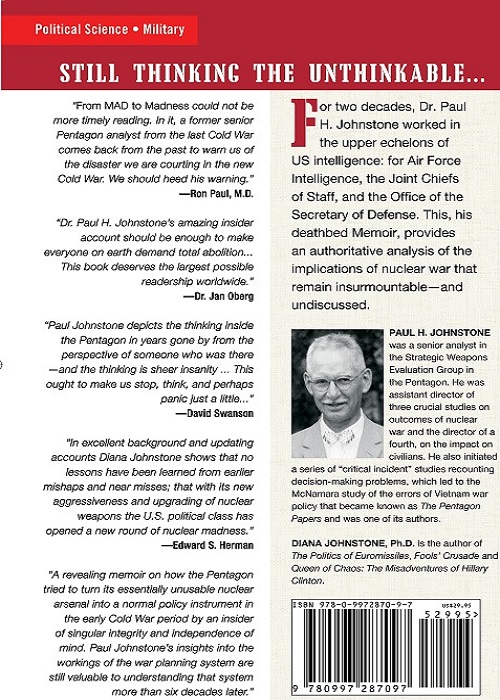 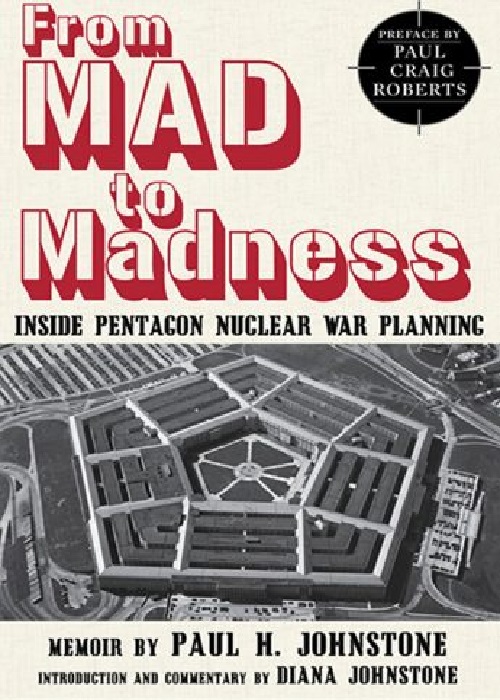 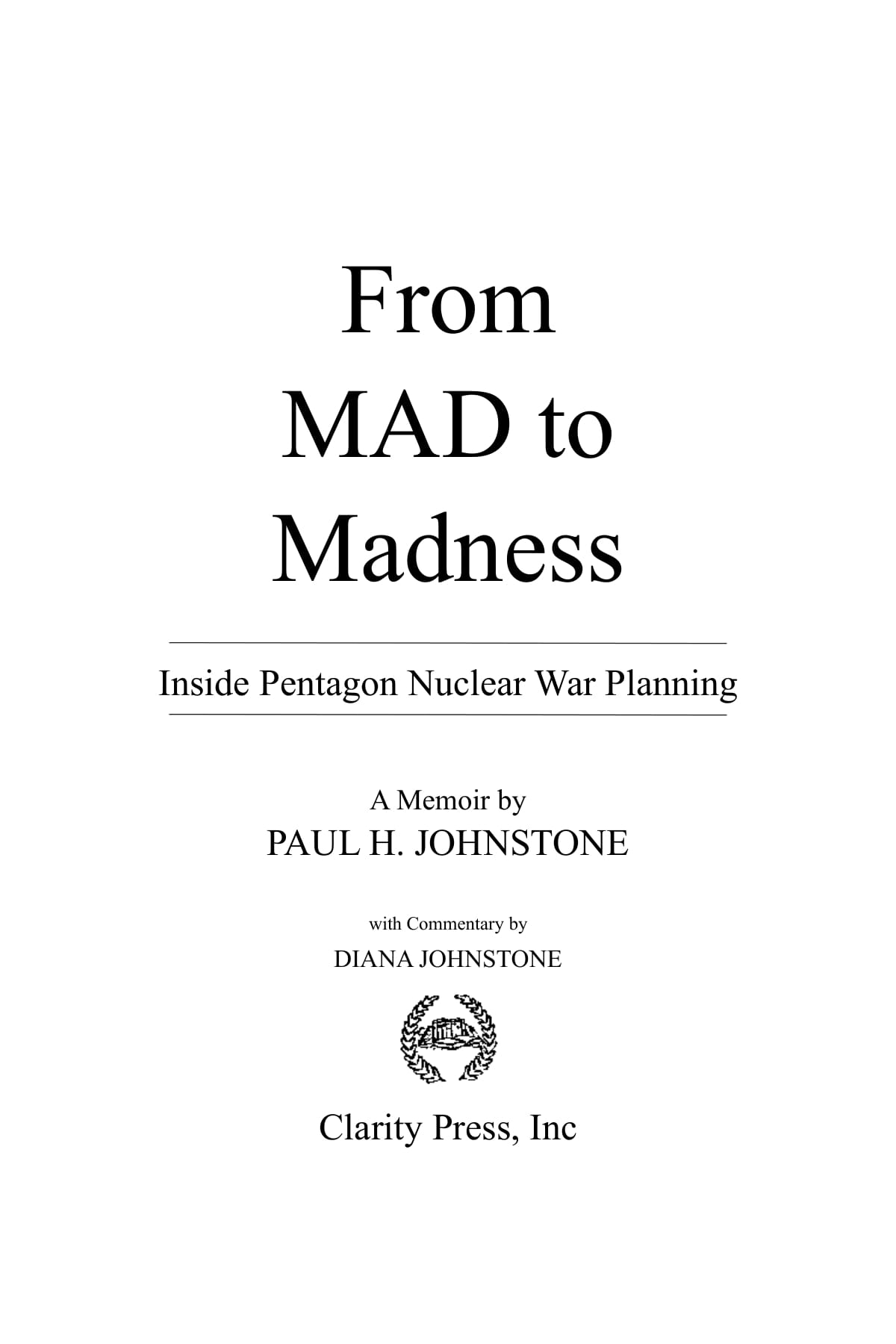 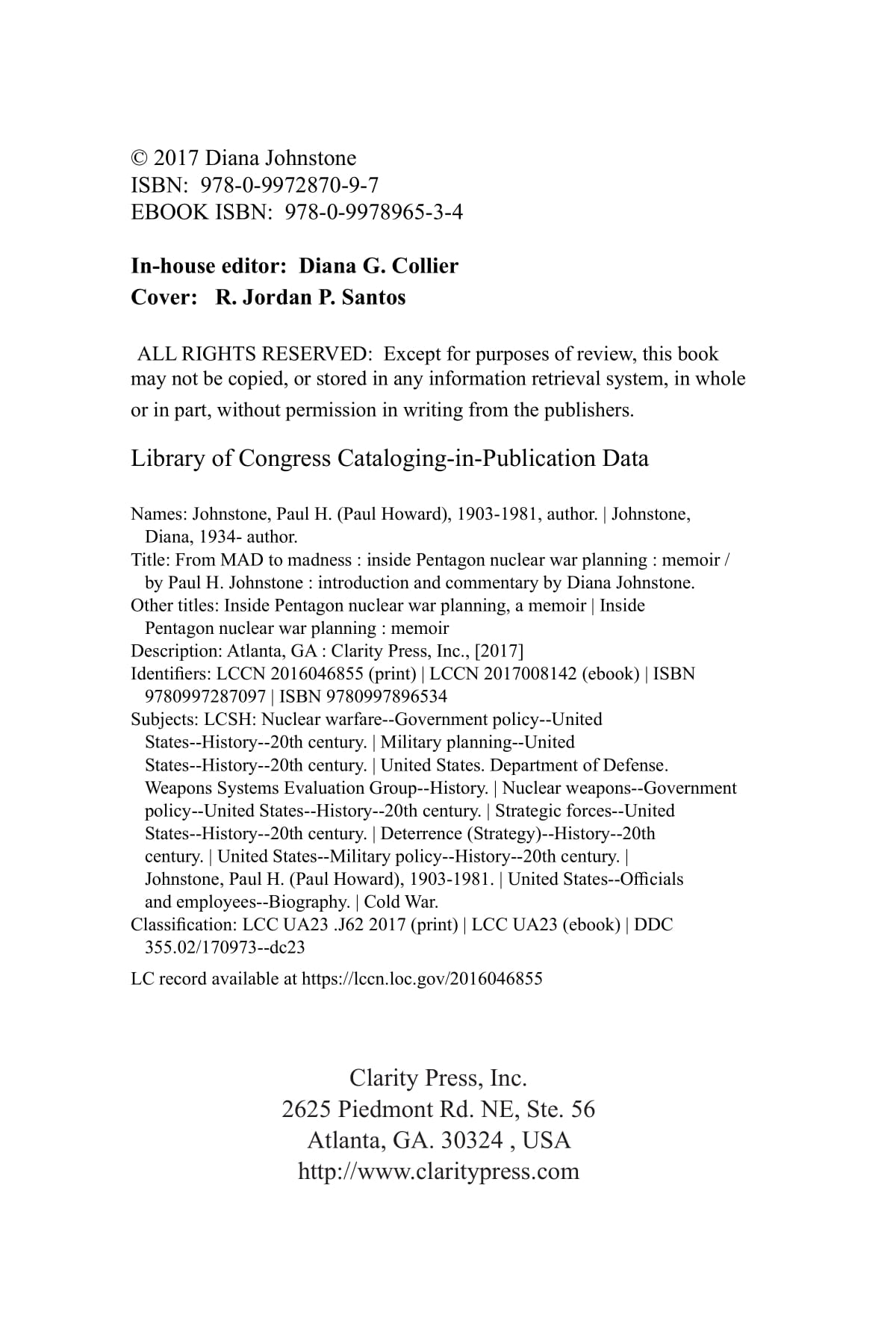 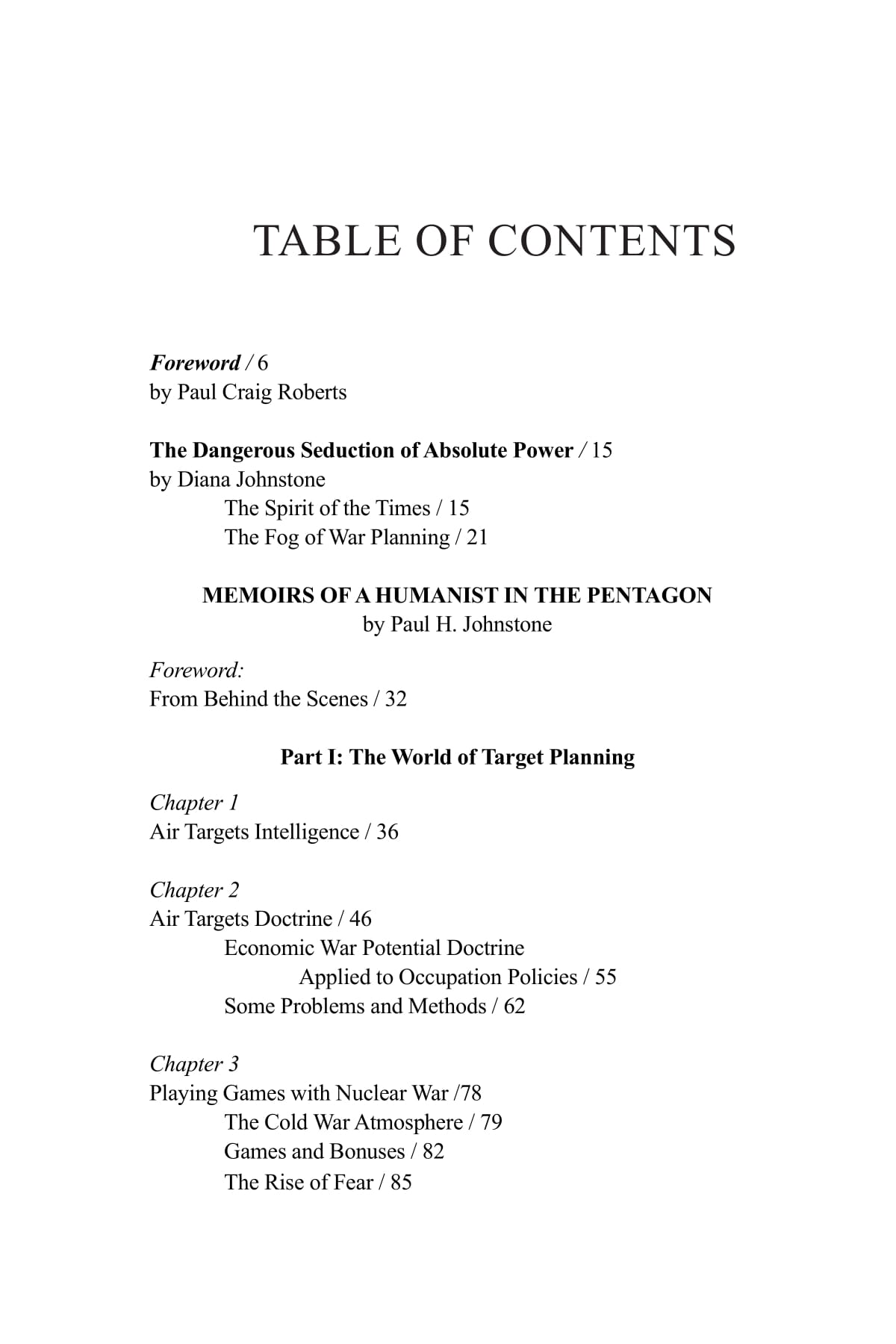 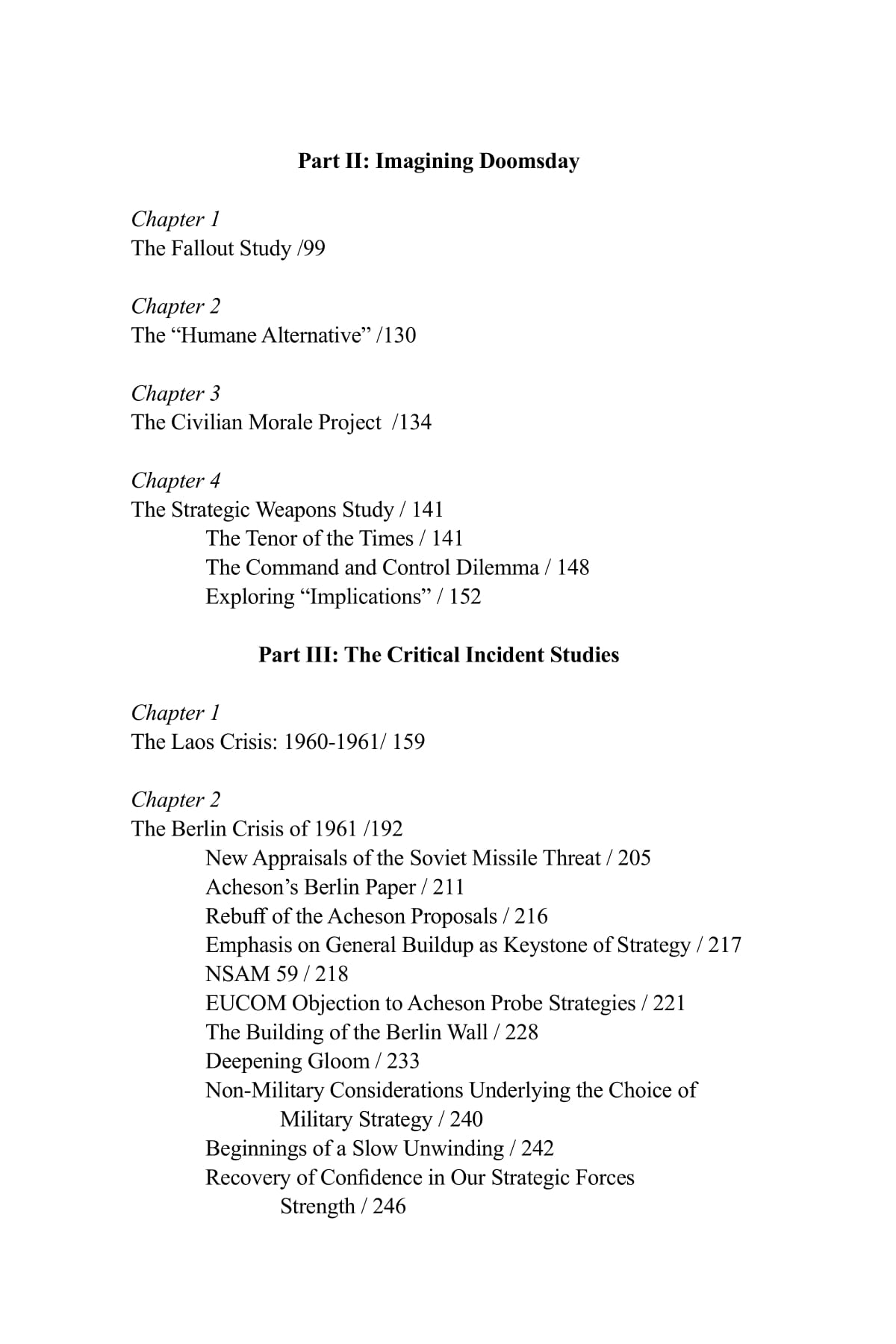 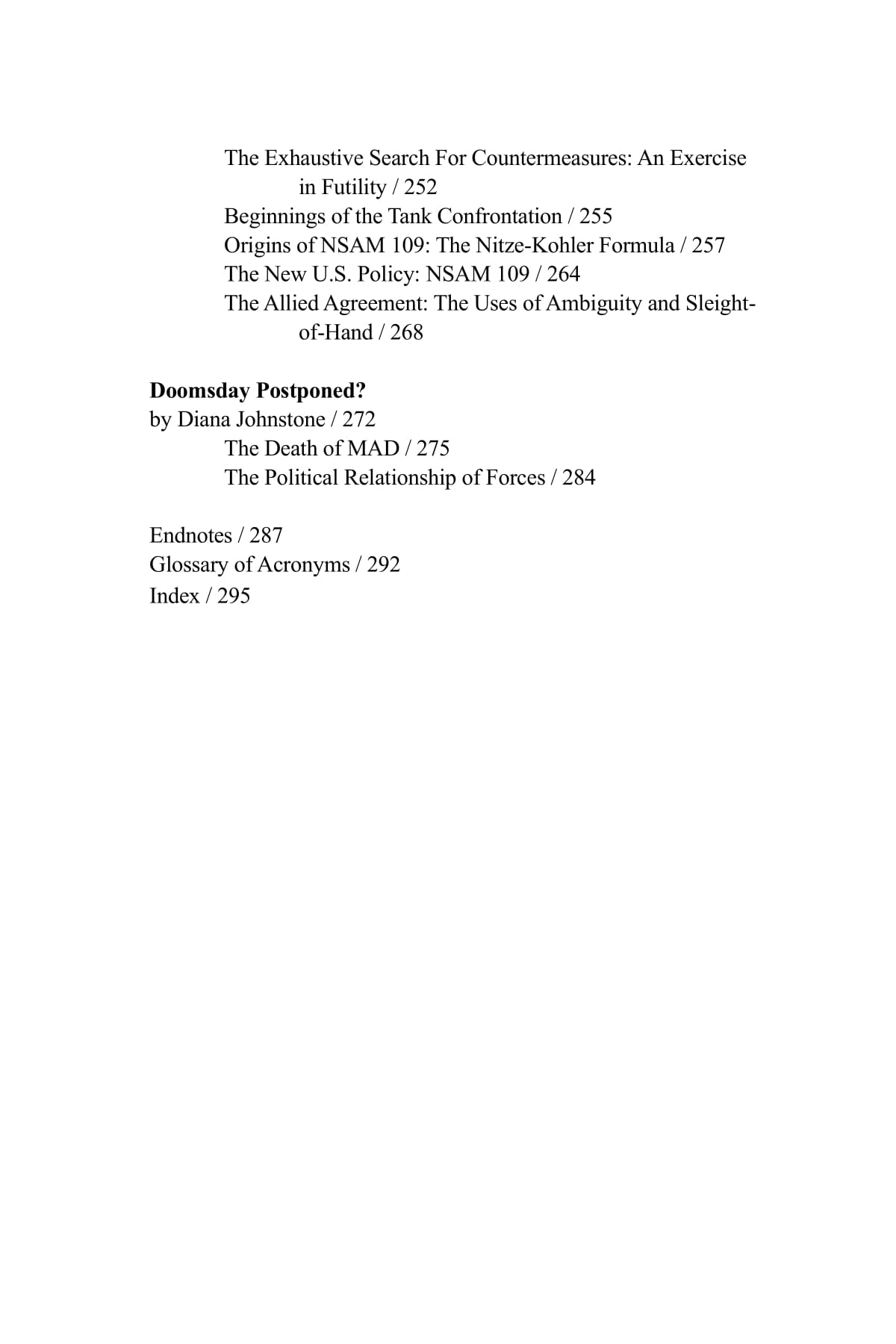 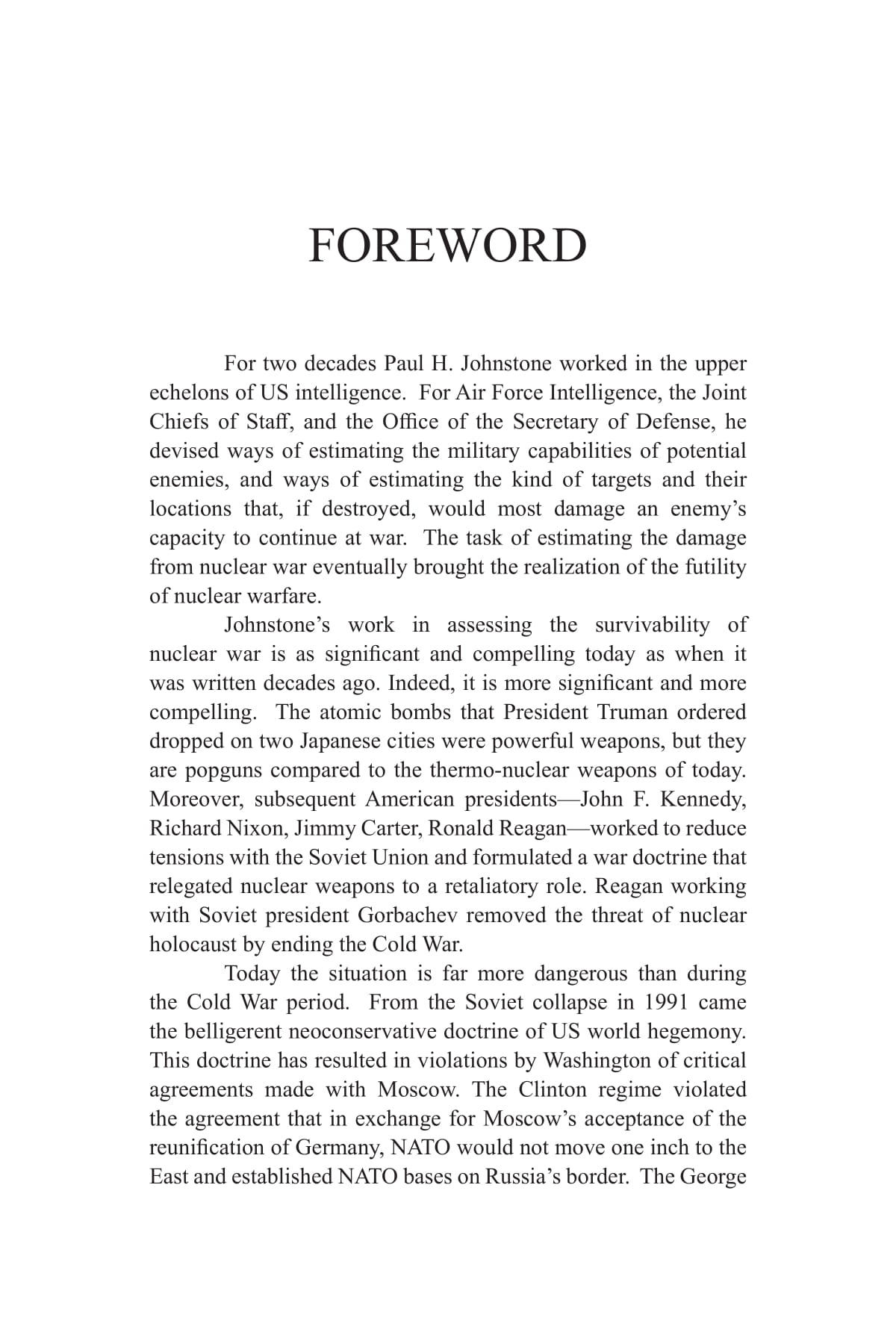 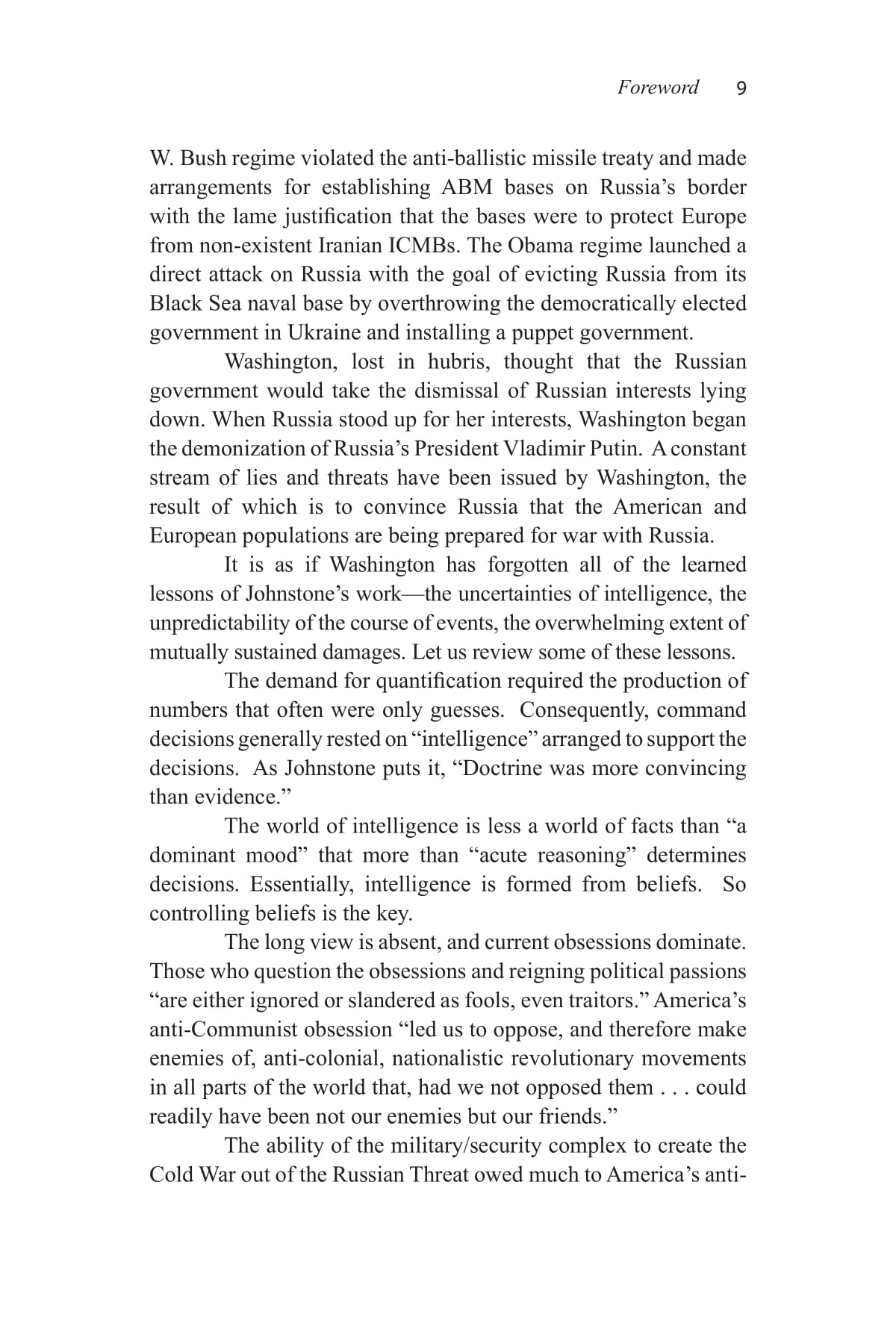 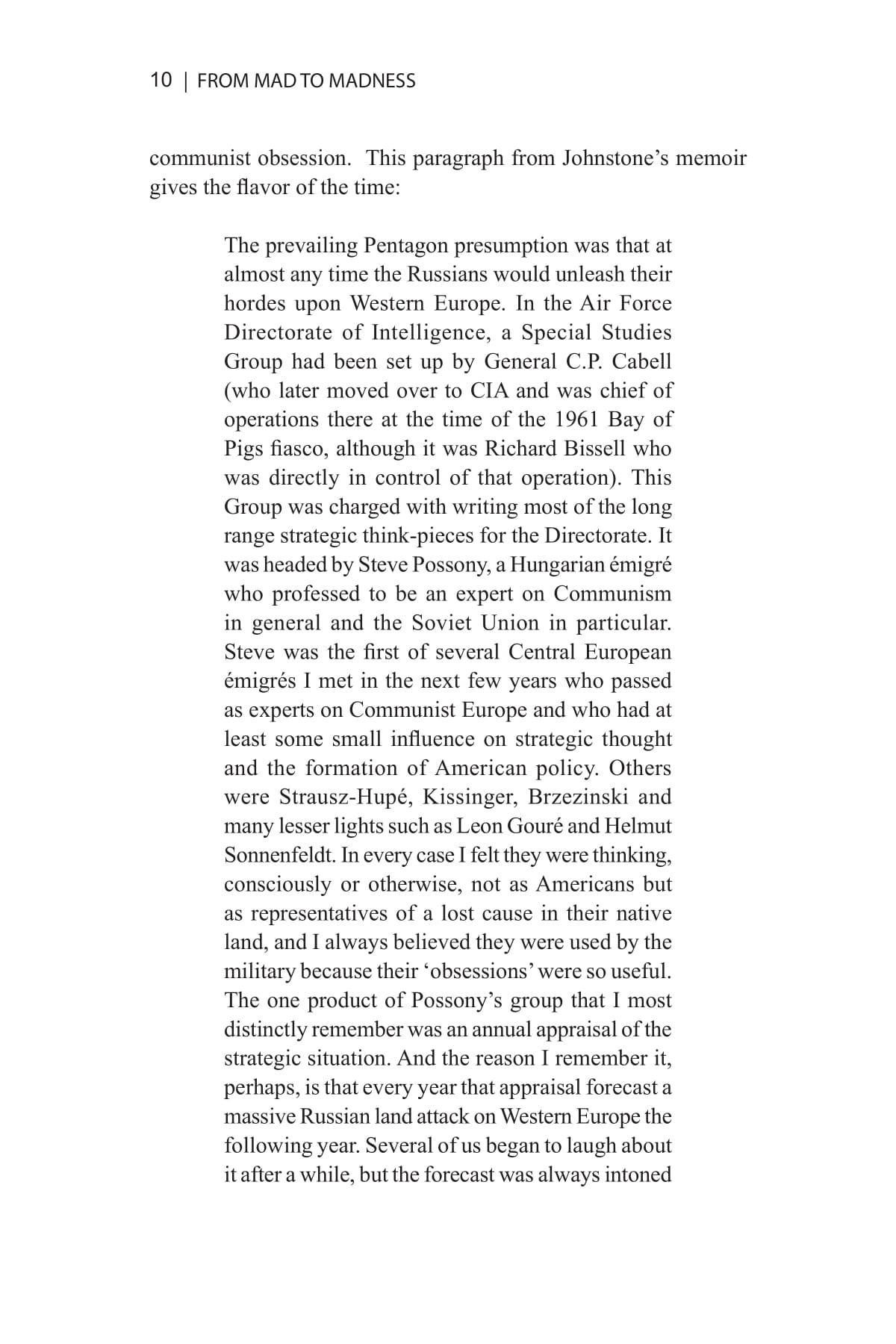 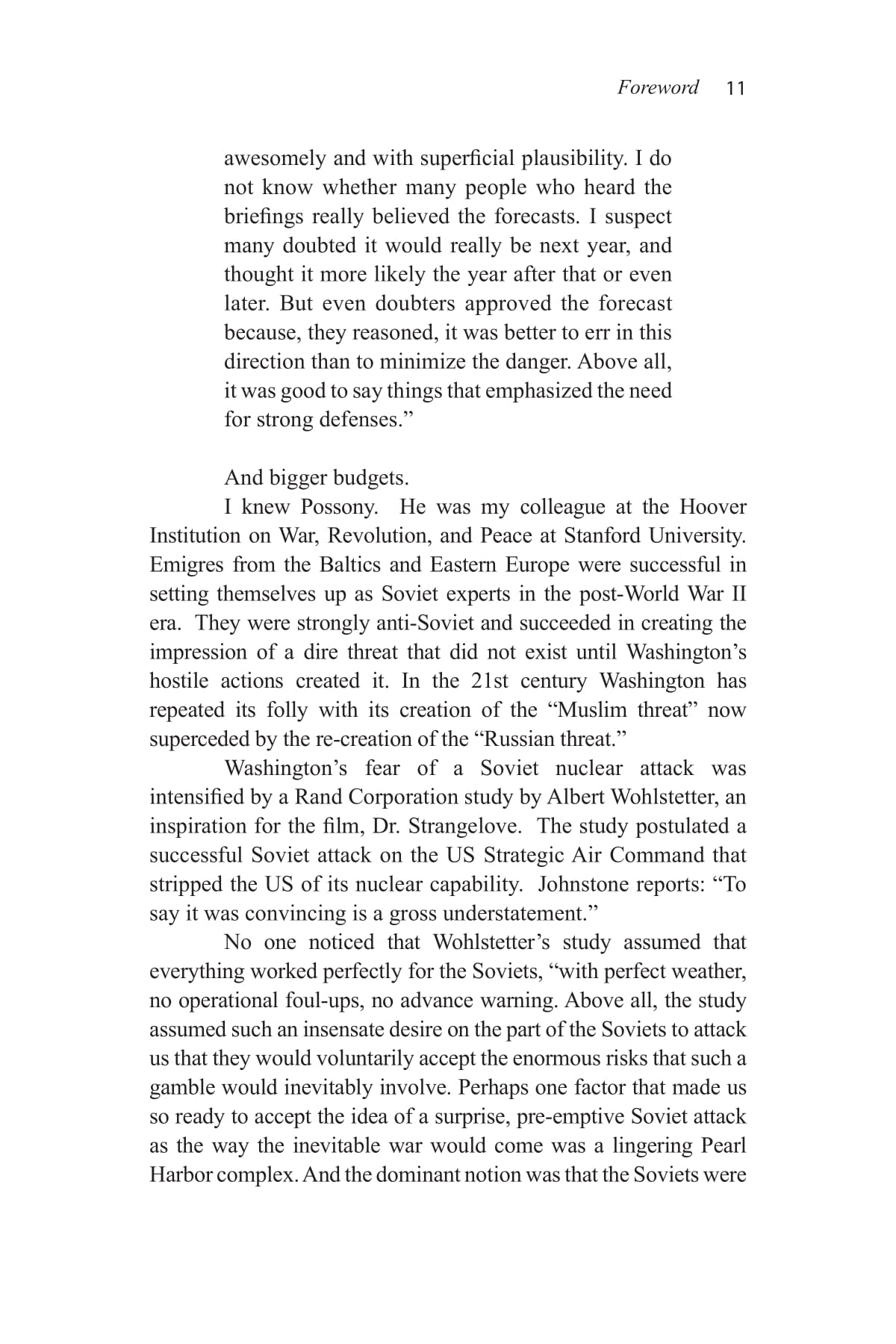 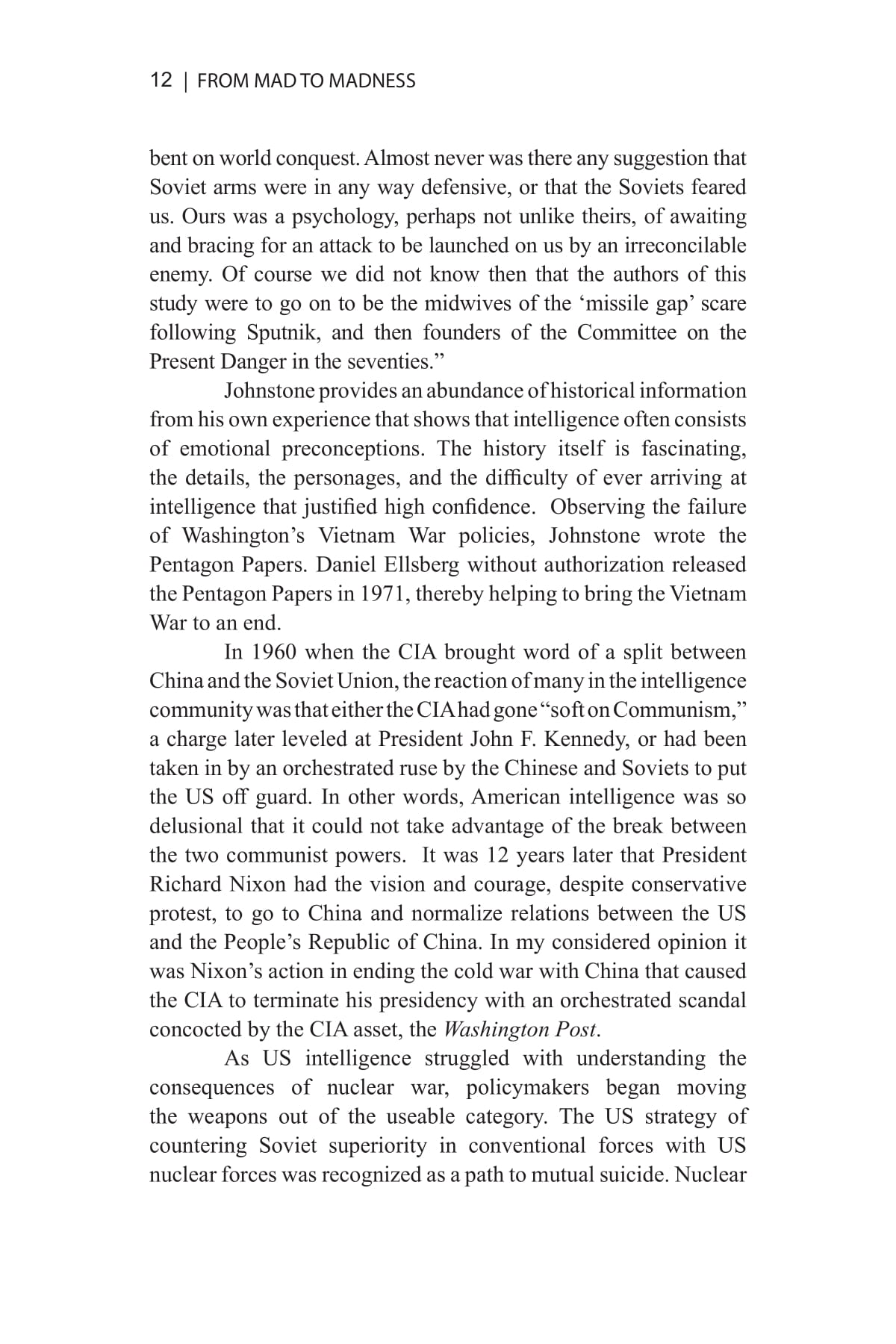 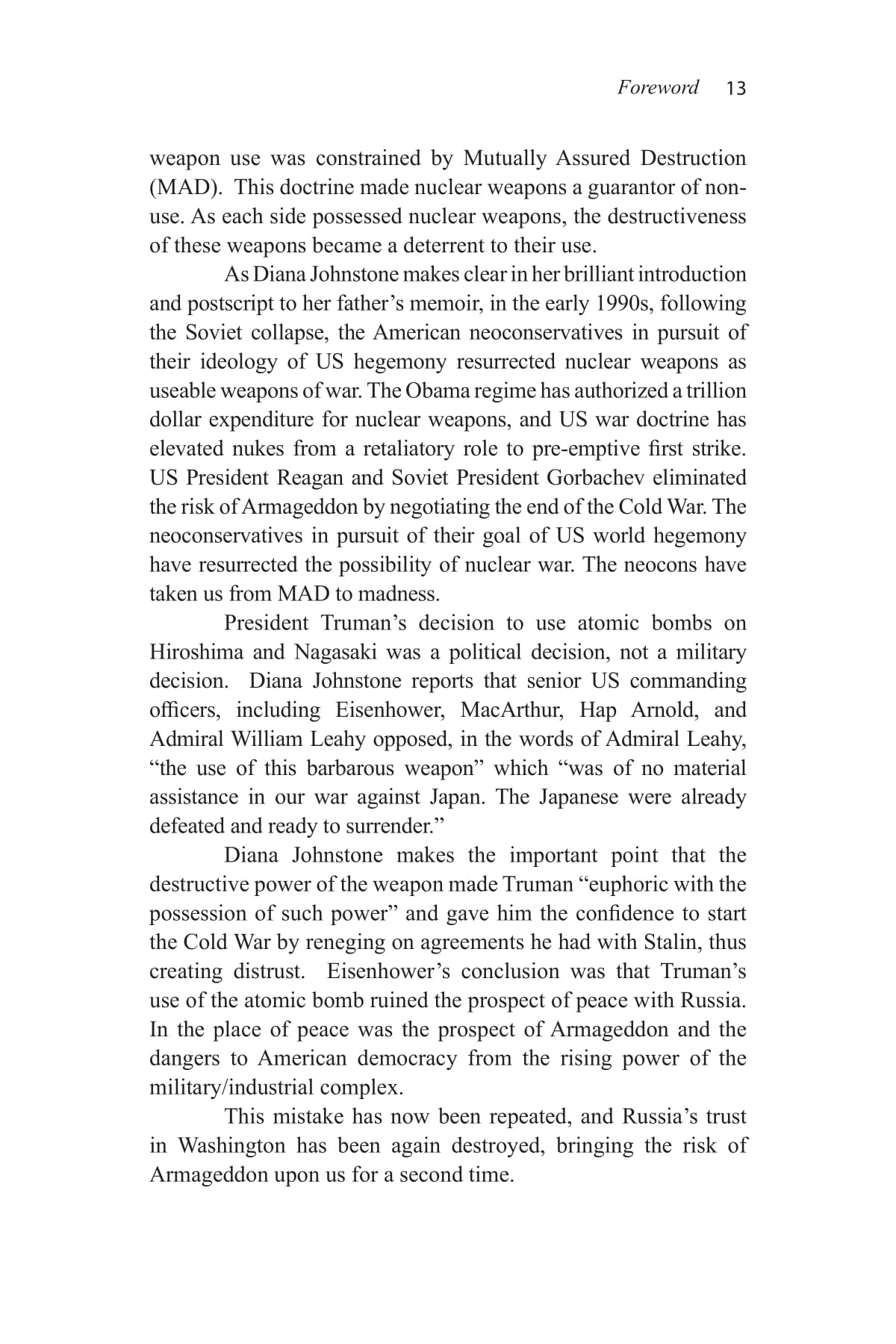 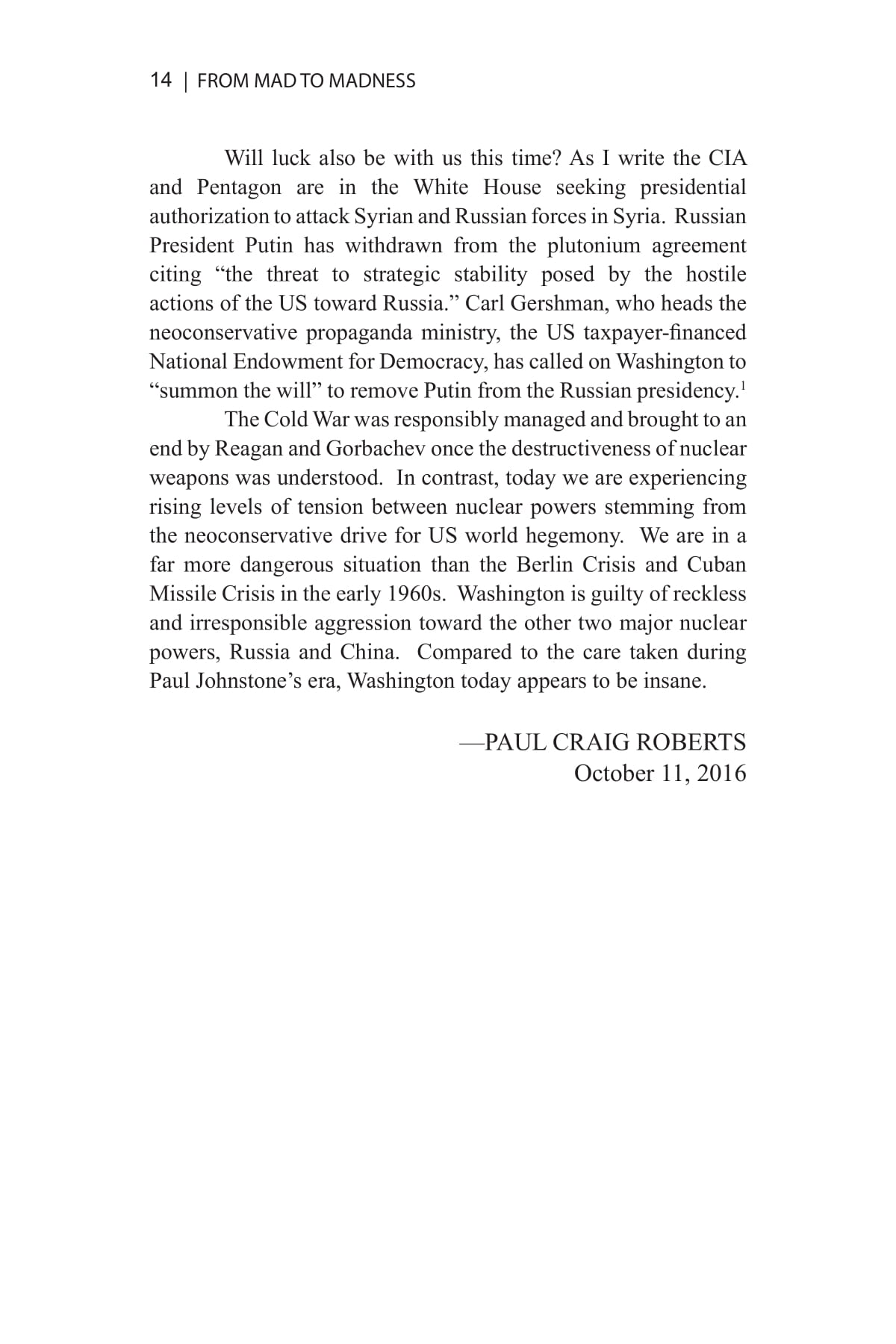 This deathbed memoir by Dr. Paul H. Johnstone, former senior analyst in the Strategic Weapons Evaluation Group (WSEG) in the Pentagon and a co-author of The Pentagon Papers, provides an authoritative analysis of the implications of nuclear war that remain insurmountable today. Indeed, such research has been kept largely secret, with the intention “not to alarm the public” about what was being cooked up.

“From MAD to Madness could not be more timely reading. In it, a former senior Pentagon analyst from the last Cold War comes back from the past to warn us of the disaster we are courting in the new Cold War. We should heed his warning.”
— Ron Paul, M.D.Former Member of Congress (R-TX)

Add to Wishlist
Facebook Twitter Google+ LinkedIn
SKU: N/A Categories: Imperialism, War/Peace Tags: fallout, NATO, Pentagon, strategic weapons, Unthinkable
A discount of 40% (plus shipping) will automatically be applied to the purchase of 10 or more copies of any Clarity Press titles when acquired directly from

This deathbed memoir by Dr. Paul H. Johnstone, former senior analyst in the Strategic Weapons Evaluation Group (WSEG) in the Pentagon and a co-author of The Pentagon Papers, provides an authoritative analysis of the implications of nuclear war that remain insurmountable today. Indeed, such research has been kept largely secret, with the intention “not to alarm the public” about what was being cooked up.

This is the story of how U.S. strategic planners in the 1950s and 1960s worked their way to the conclusion that nuclear war was unthinkable. It drives home these key understandings:

Dr. Johnstone’s memoirs of twenty years in the Pentagon tell that story succinctly, coolly and objectively. He largely lets the facts speak for themselves, while commenting on the influence of the Cold War spirit of the times and its influence on decision-makers.

Johnstone writes: “Theorizing about nuclear war was a sort of virtuoso exercise in creating an imaginary world wherein all statements must be consistent with each other, but nothing need be consistent with reality because there was no reality to be checked against.”

While remaining highly secret – so much so that Dr. Johnstone himself was denied access to what he had written – these studies had a major impact on official policy. They contributed to a shift from the notion that the United States could inflict “massive retaliation” on its Soviet enemy to recognition that a nuclear exchange would bring about Mutual Assured Destruction (MAD).

The alarming truth today is that these lessons seem to have been forgotten in Washington, just as United States policy has become as hostile to Russia as it was toward the Soviet Union during the Cold War. U.S. foreign policy is pursuing hostile encirclement of two major nuclear powers, Russia and China. Without public debate, apparently without much of any public interest, the United States is preparing to allocate a trillion dollars over the next thirty years to modernize its entire nuclear arsenal. It is as if all that was once understood about the danger of nuclear war has been forgotten.

DIANA JOHNSTONE, Ph.D. A native of Minnesota, raised in New Deal Washington, Diana Johnstone has spent more than half her life in Europe as a political observer and journalist, working for Agence France Presse, for In These Times as European Correspondent, and as press officer for the Green Group in the European Parliament. She holds a BA in Russian Area studies and a PhD in French literature. She is author of three books including Fools’ Crusade: Yugoslavia, NATO and Western Delusions., and coauthor with her father, Paul H. Johnstone, of From Mad to Madness: Inside Pentagon Nuclear War Planning

PAUL H. JOHNSTONE was a senior analyst in the Weapons Systems Evaluation Group (WSEG) in the Pentagon. He was assistant director of three crucial studies on outcomes
of nuclear war and the director of a fourth, on the impact on civilians. He also initiated a series of “critical incident” studies recounting decision-making problems, which led to the McNamara study of the errors of Vietnam war policy known as The Pentagon Papers and was one of its authors.

7 reviews for FROM MAD TO MADNESS: Inside Pentagon Nuclear War Planning