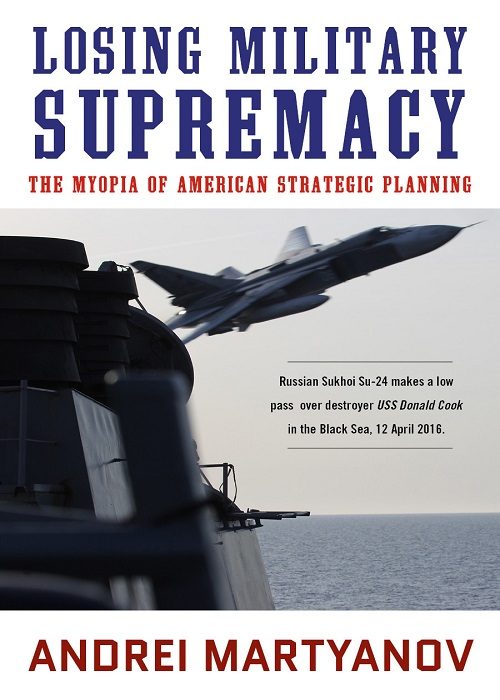 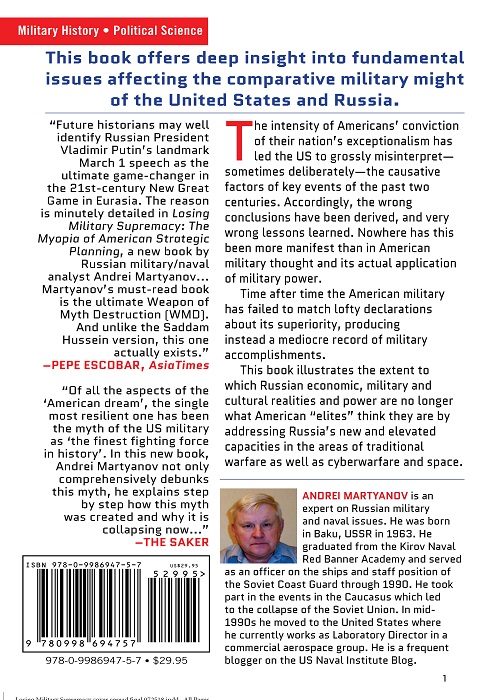 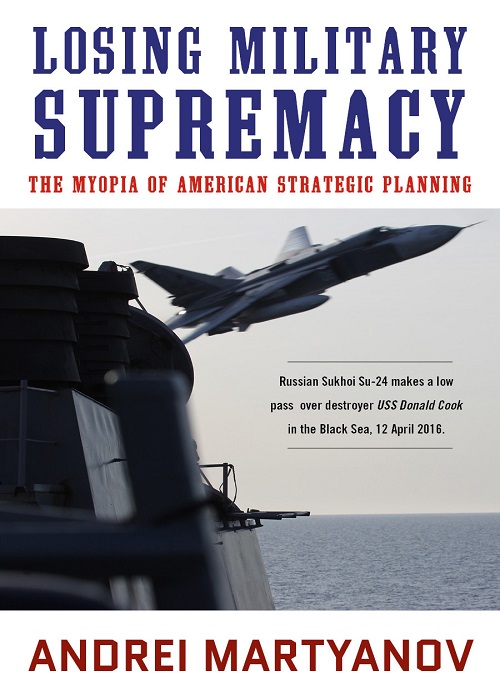 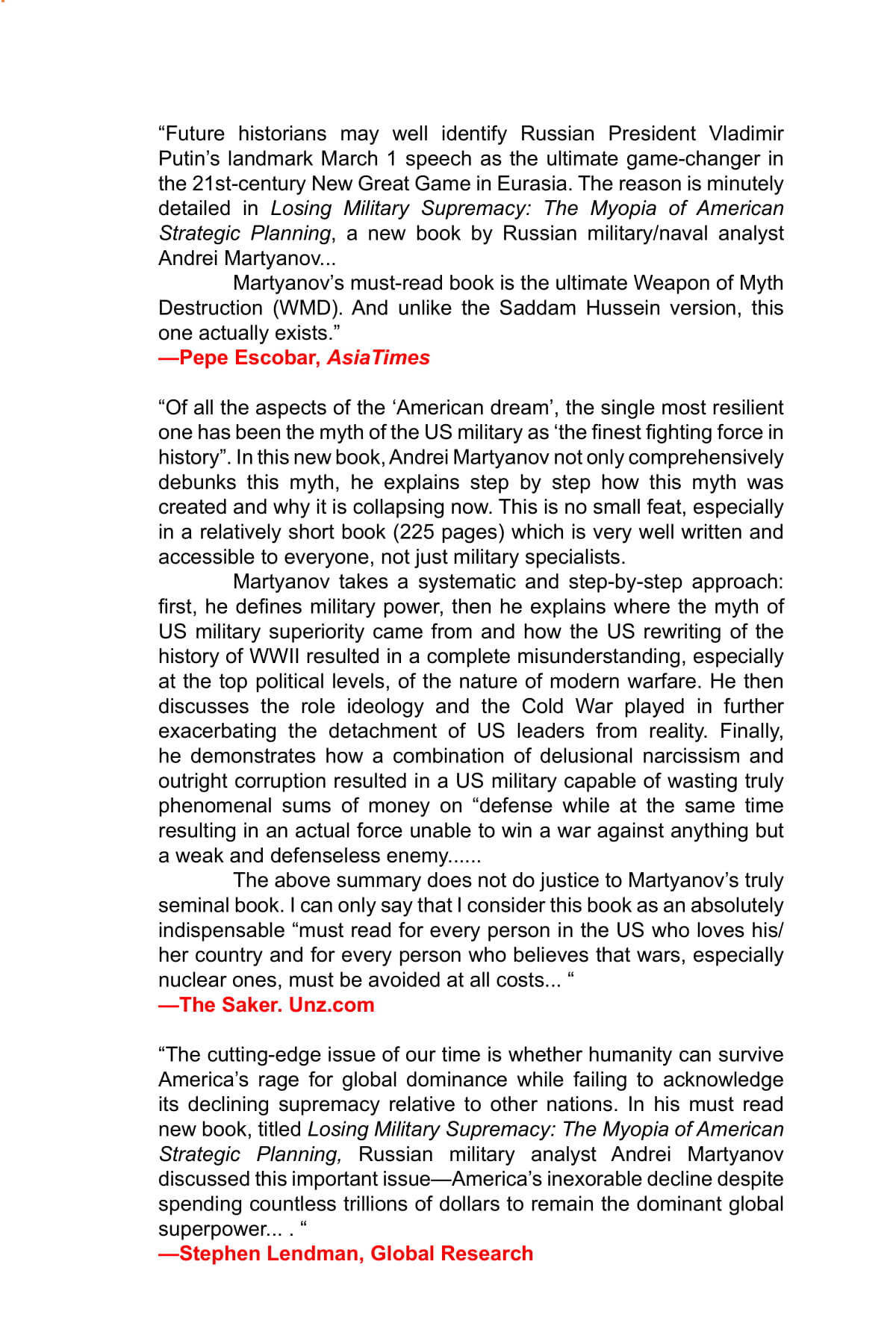 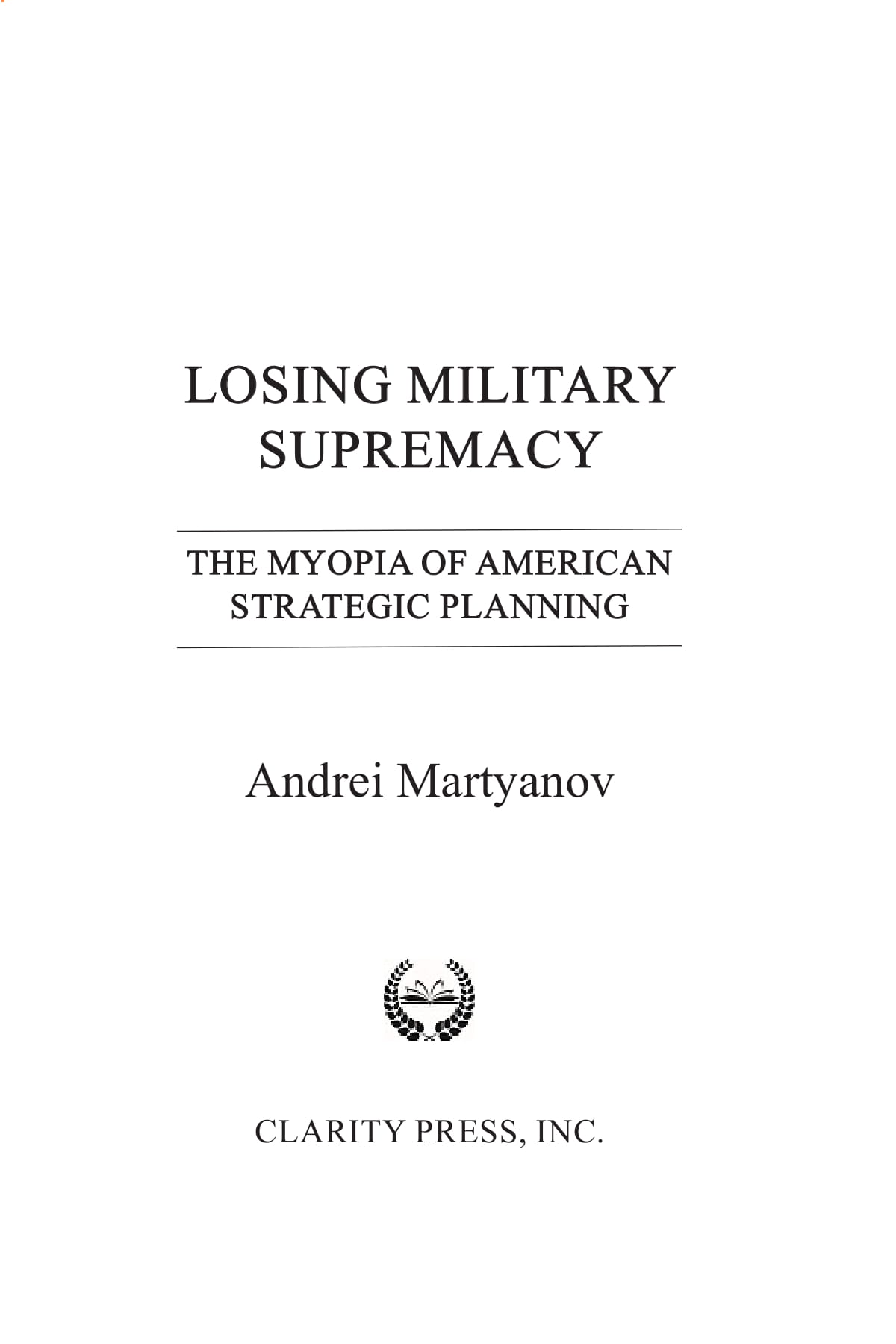 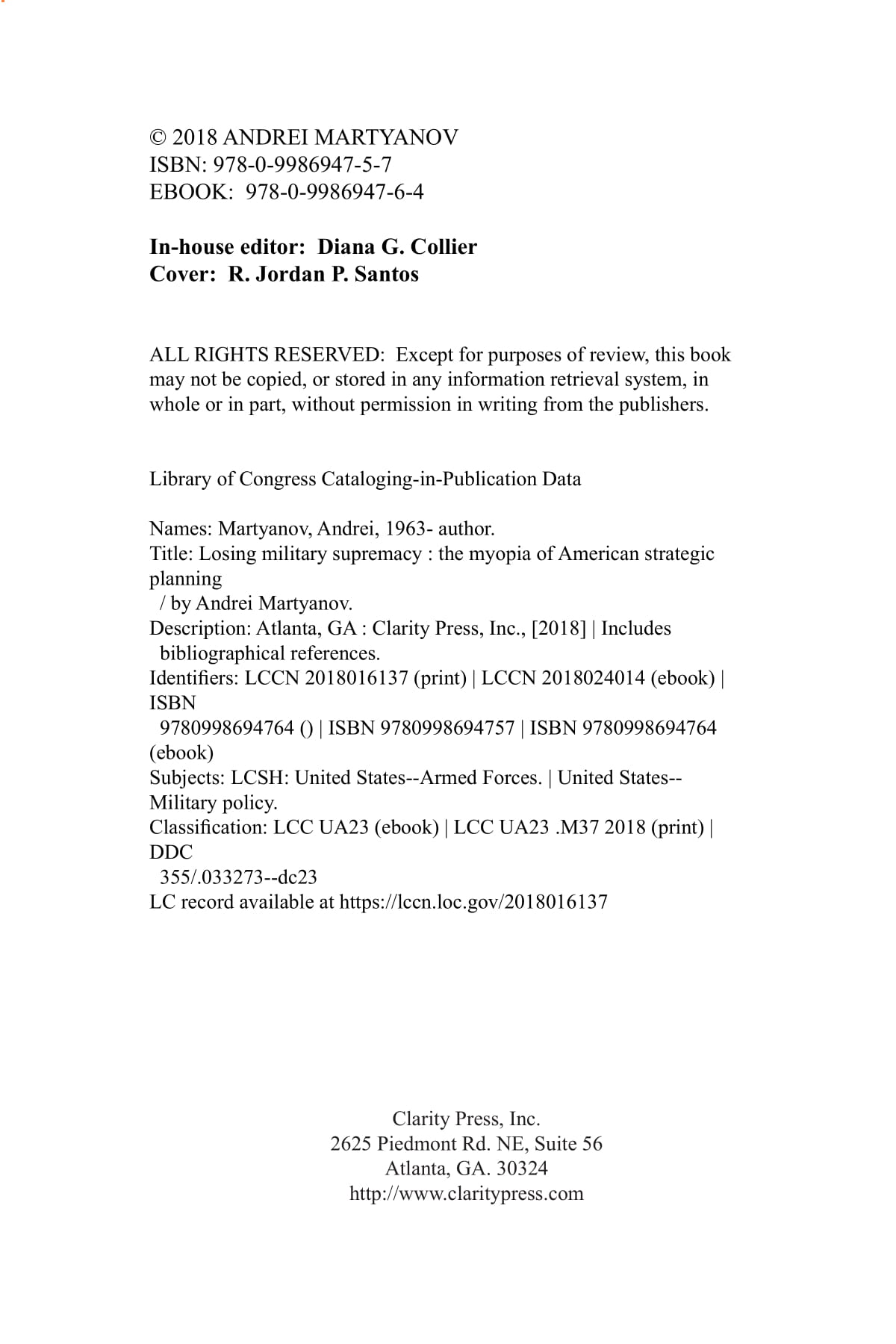 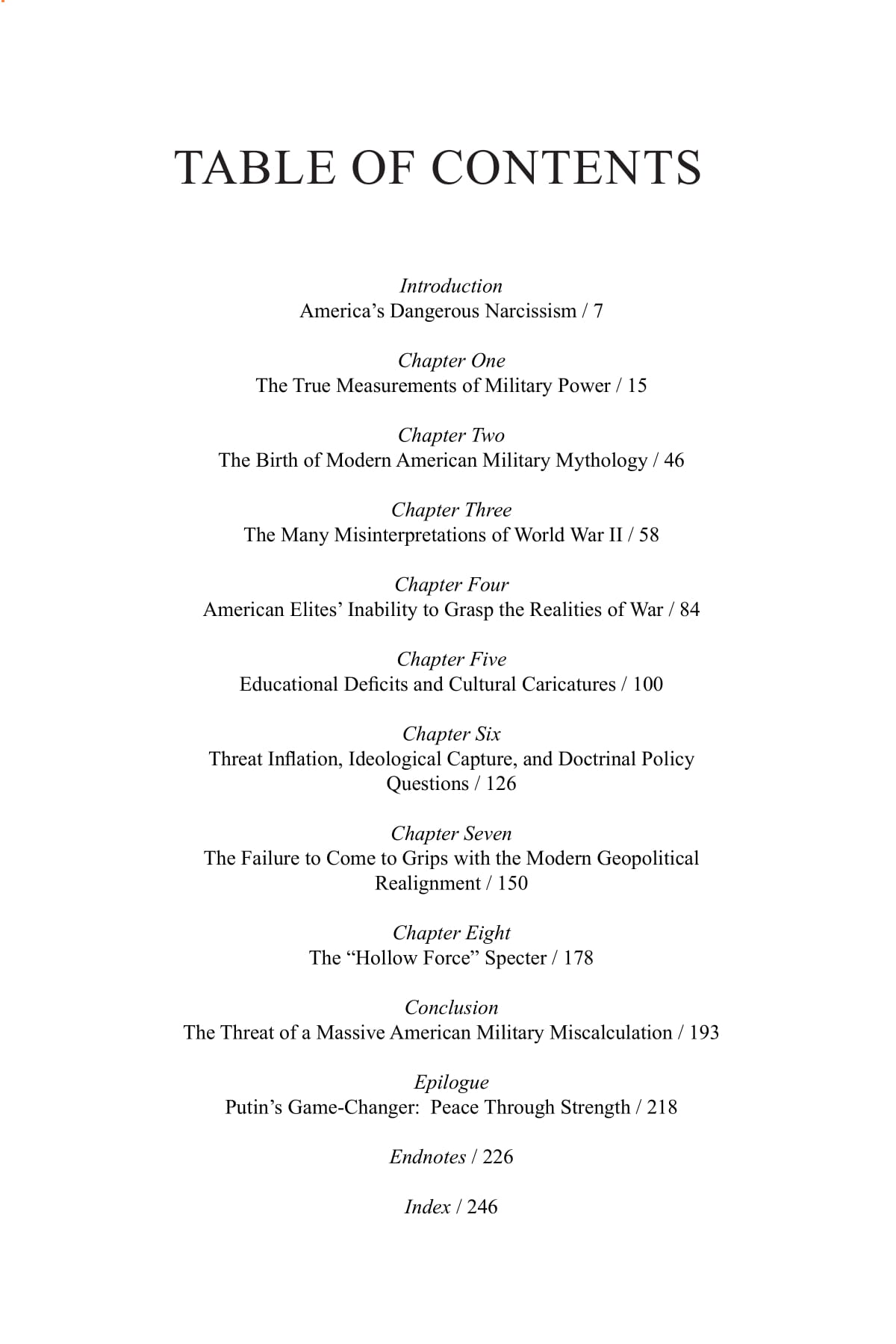 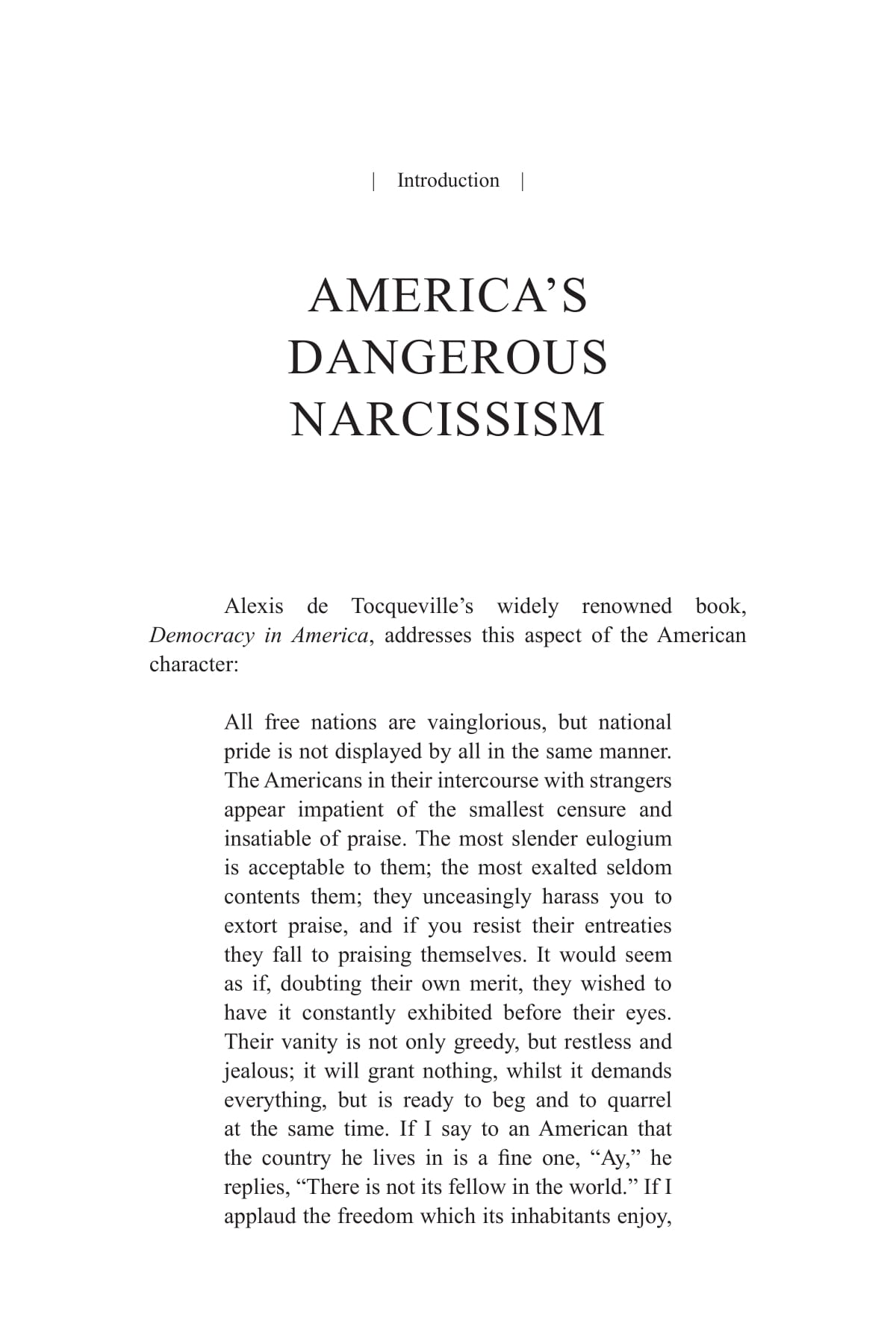 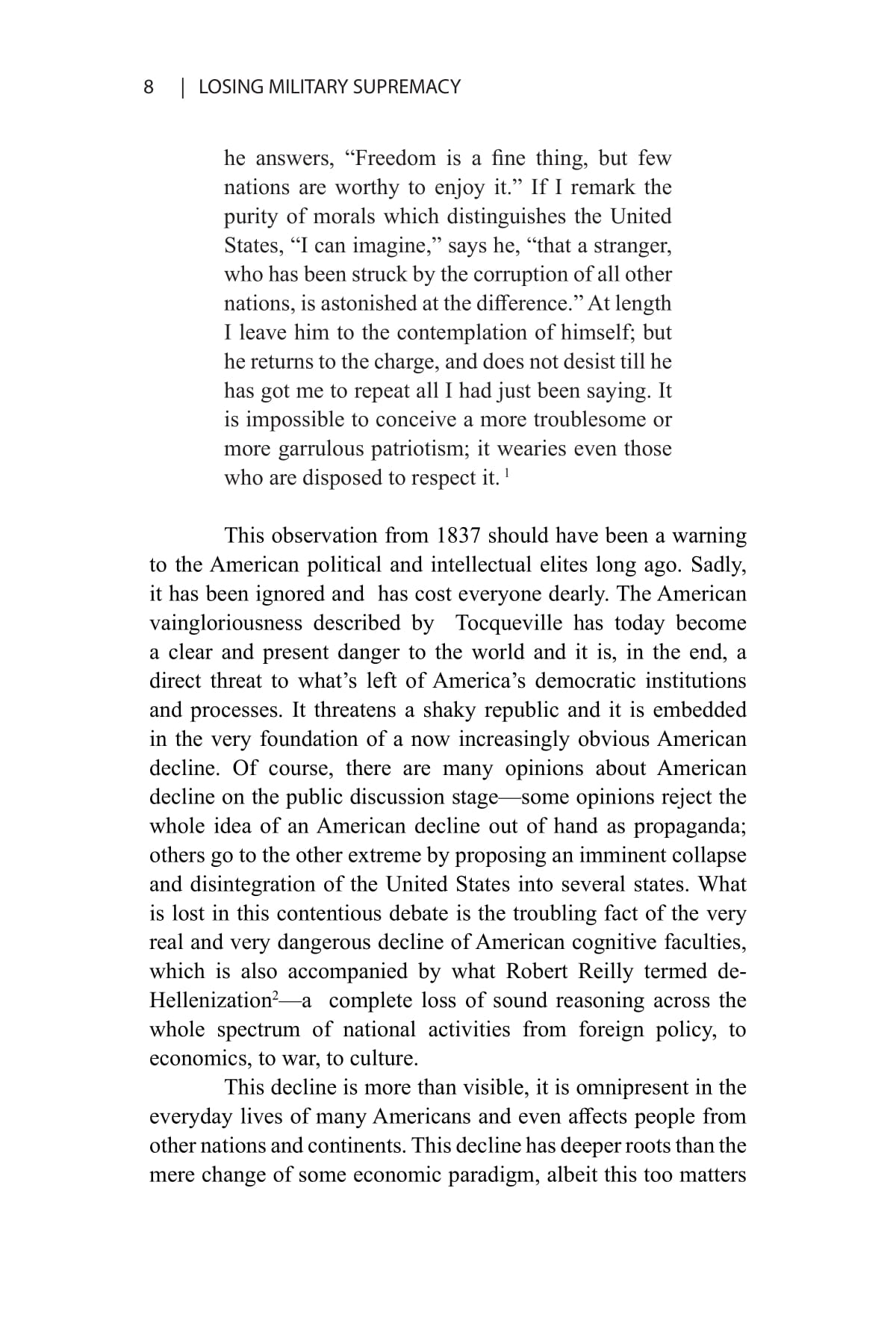 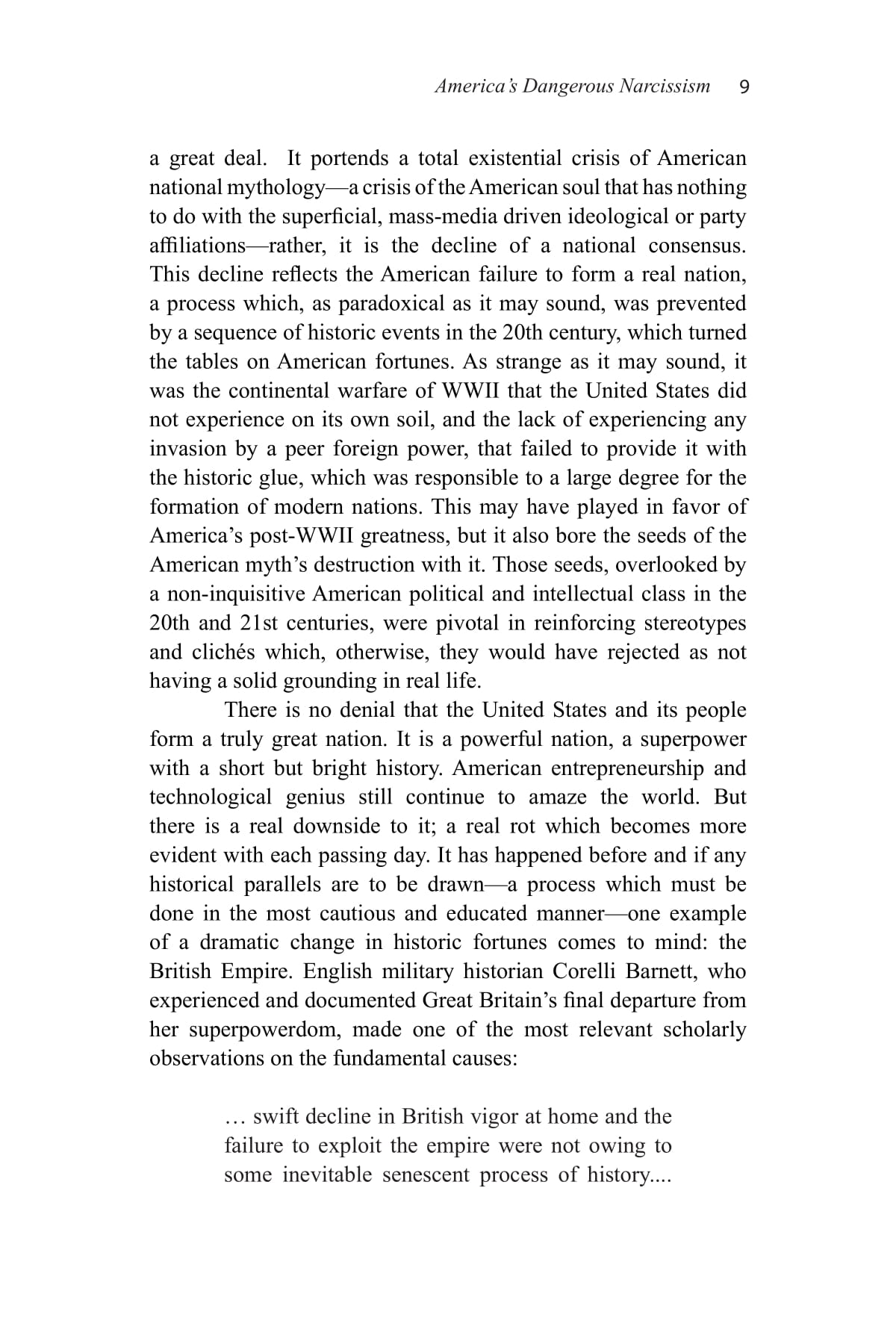 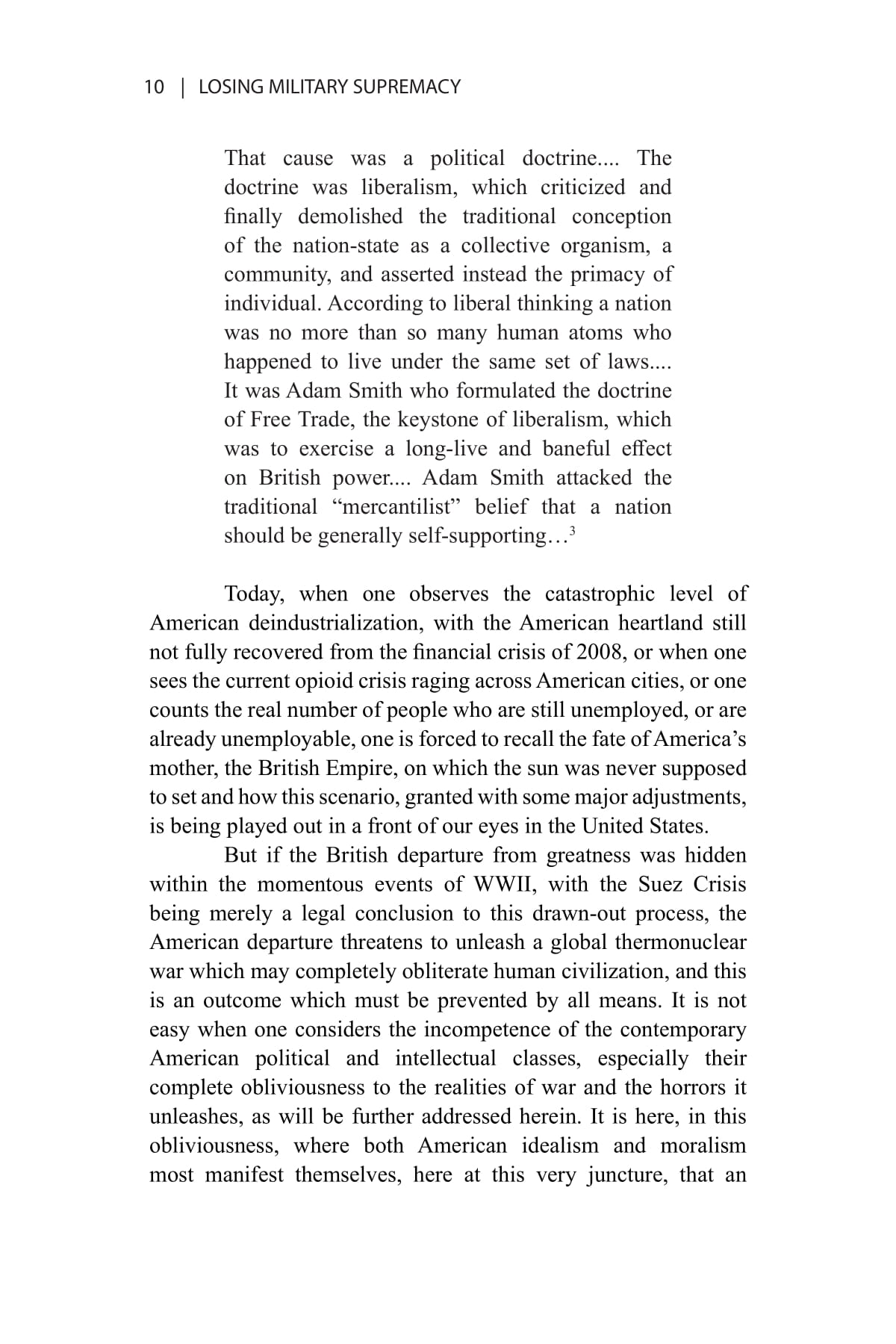 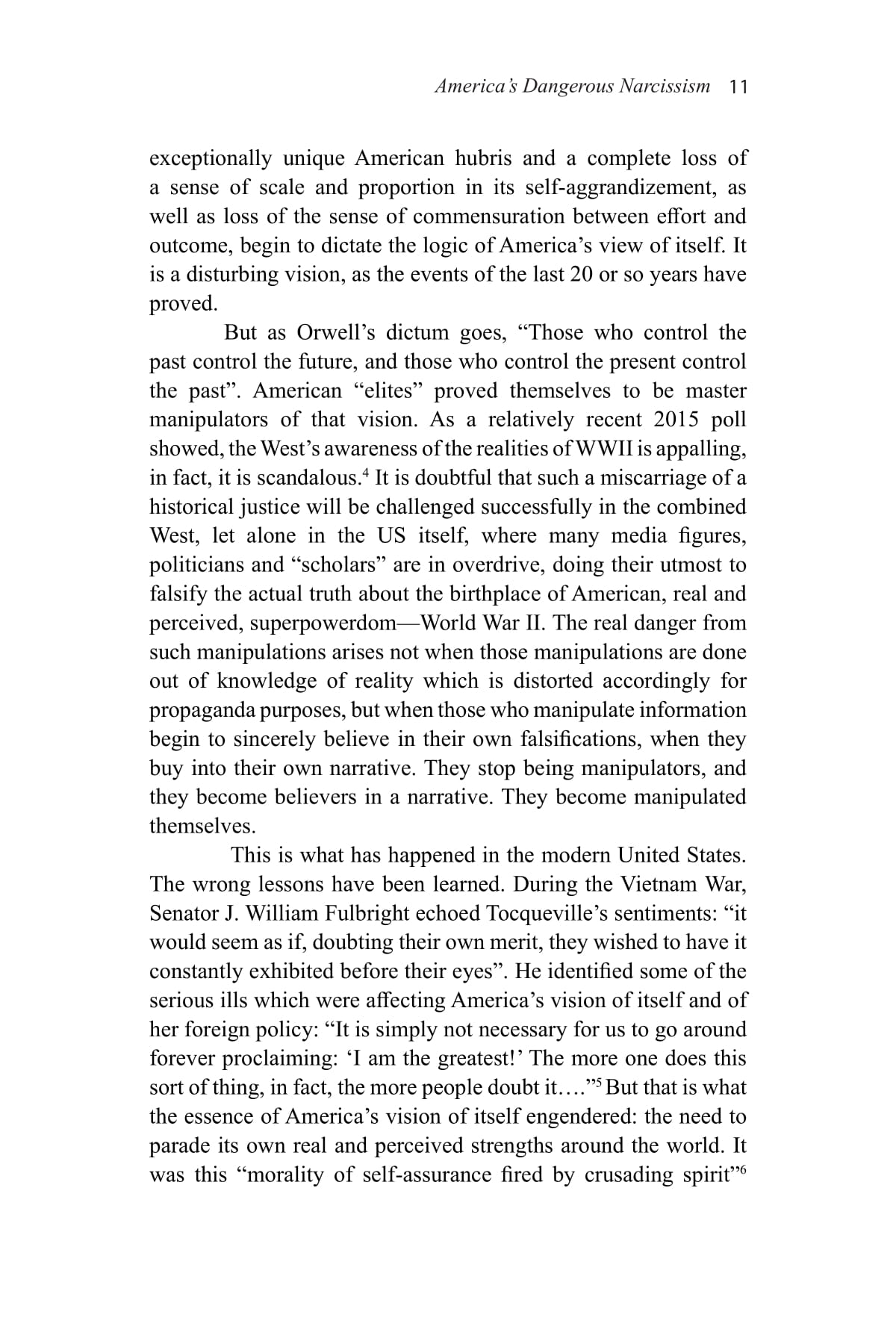 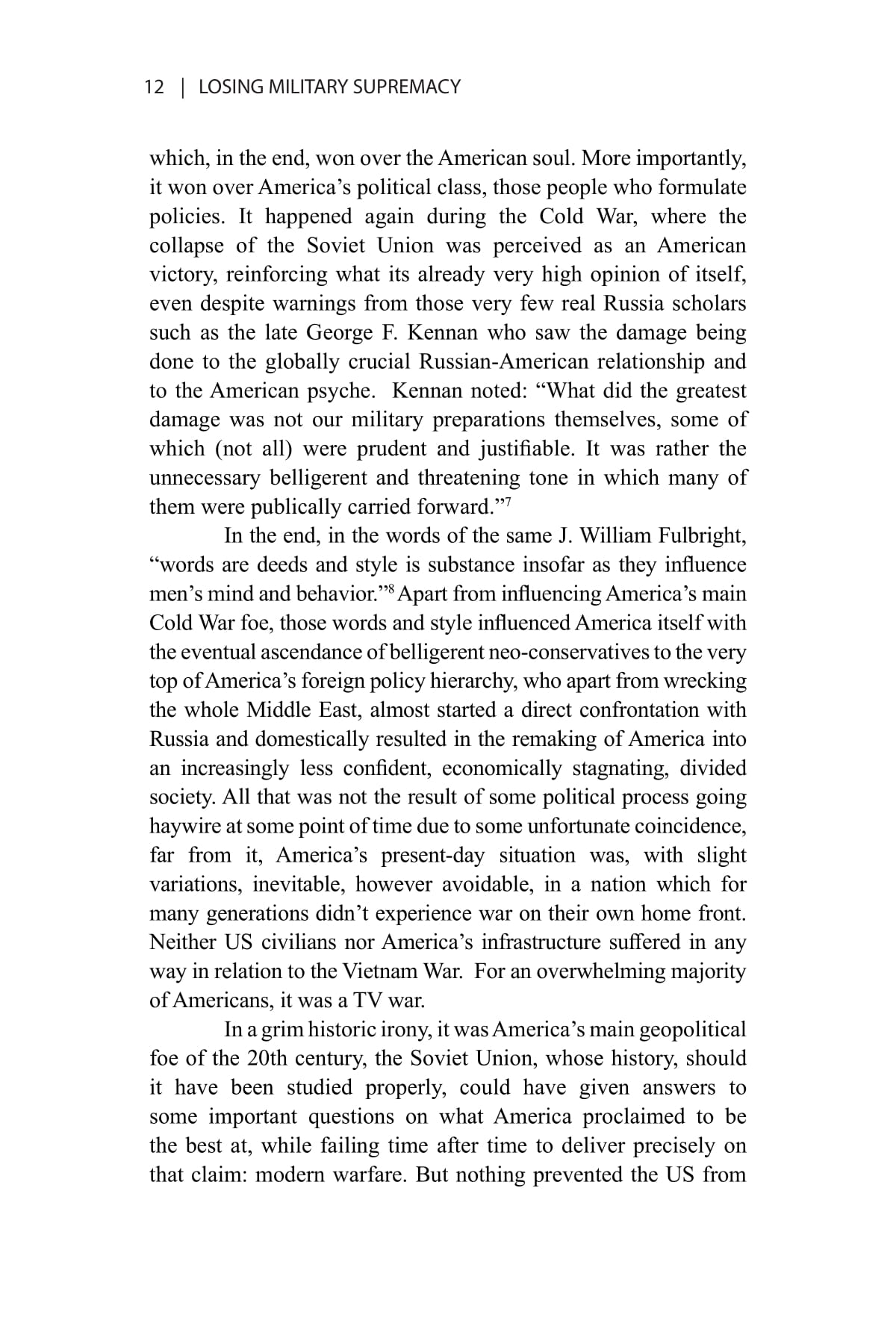 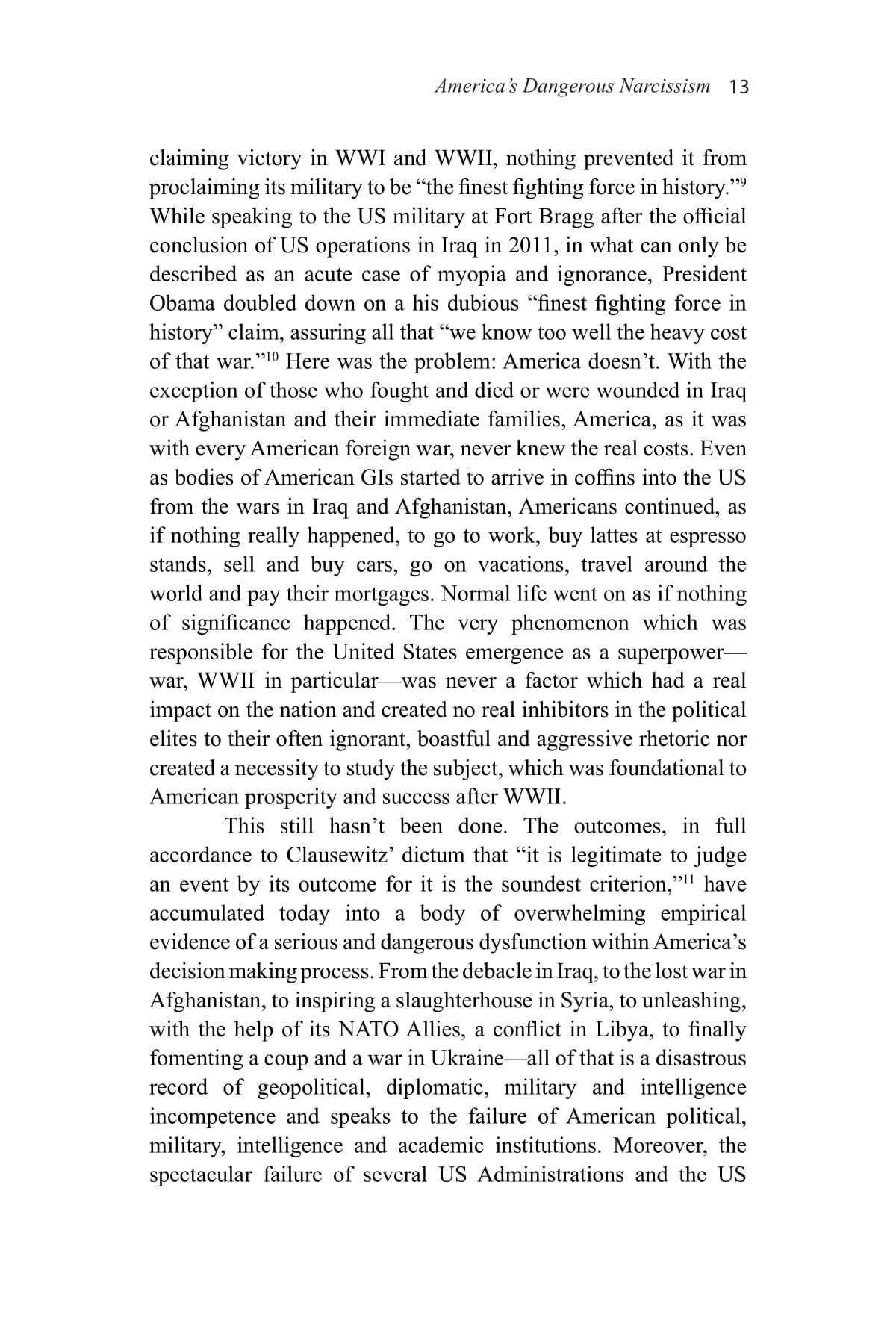 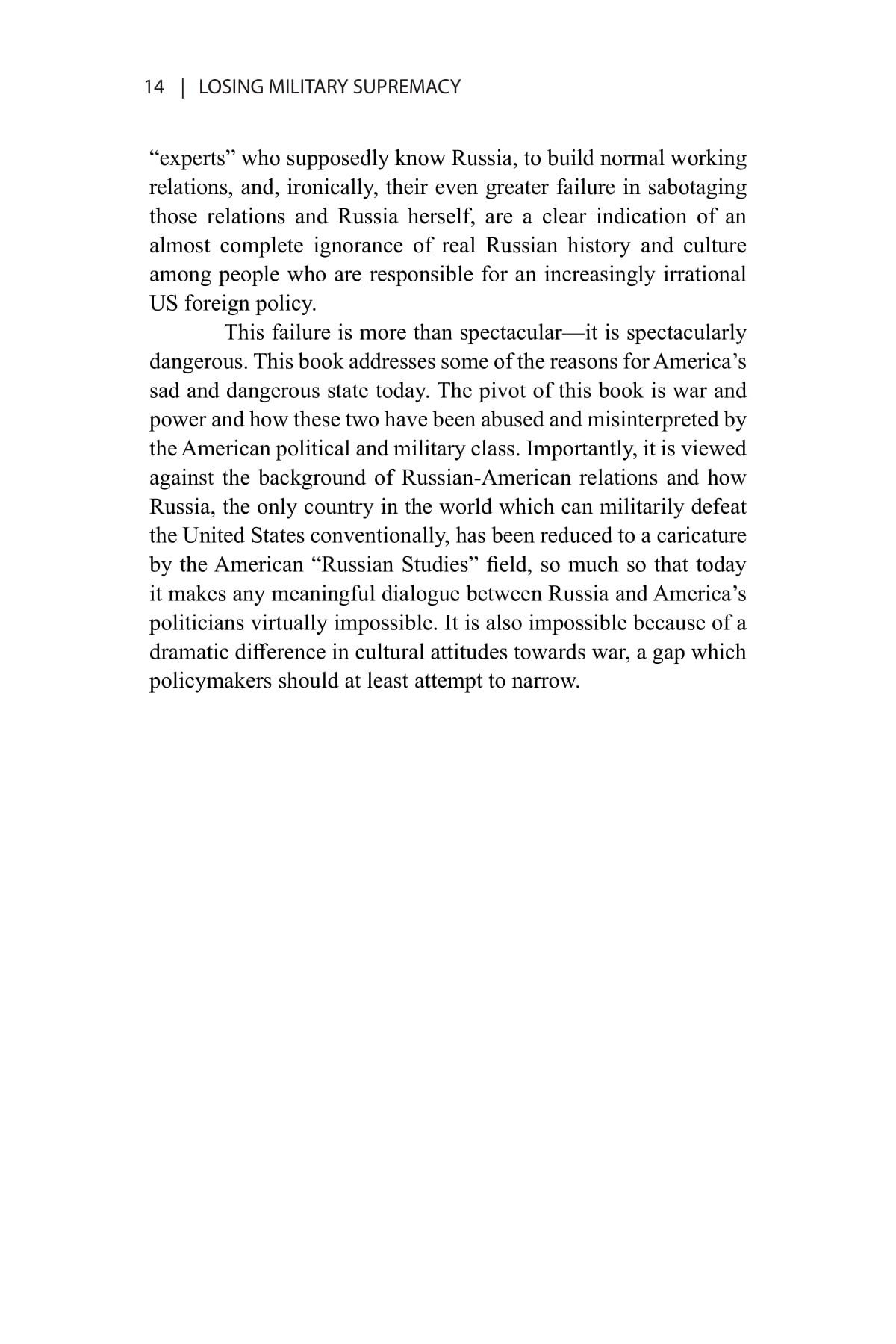 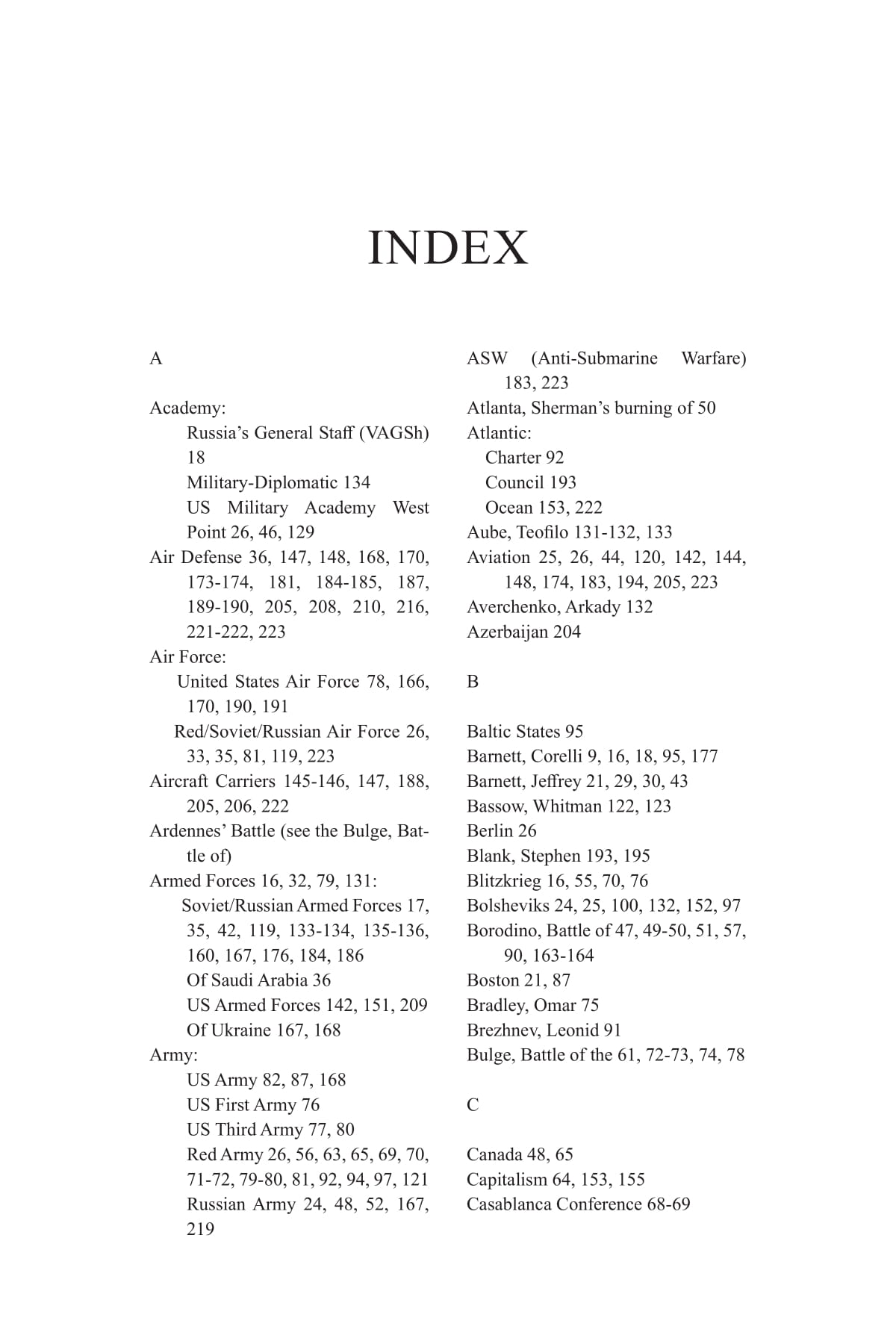 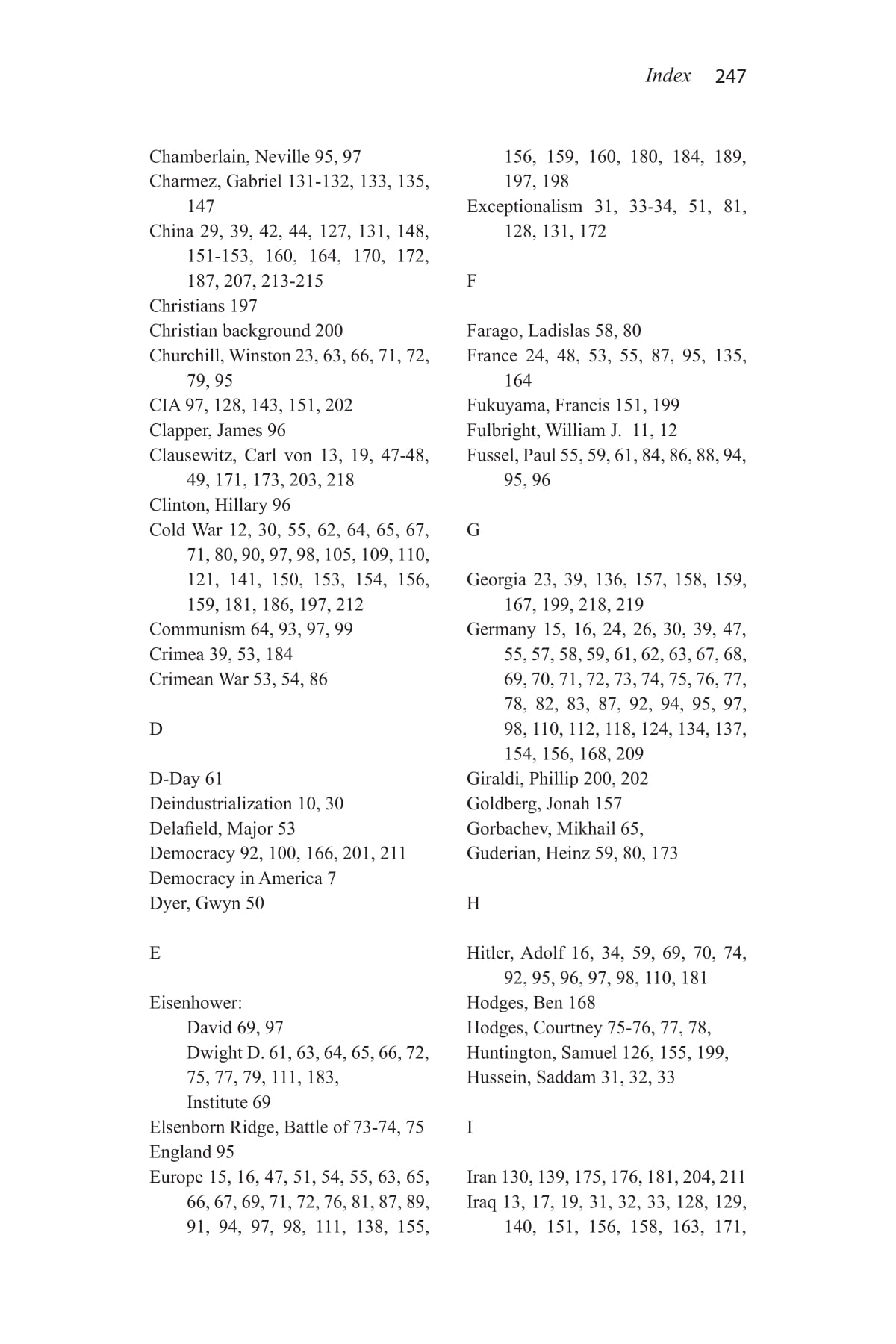 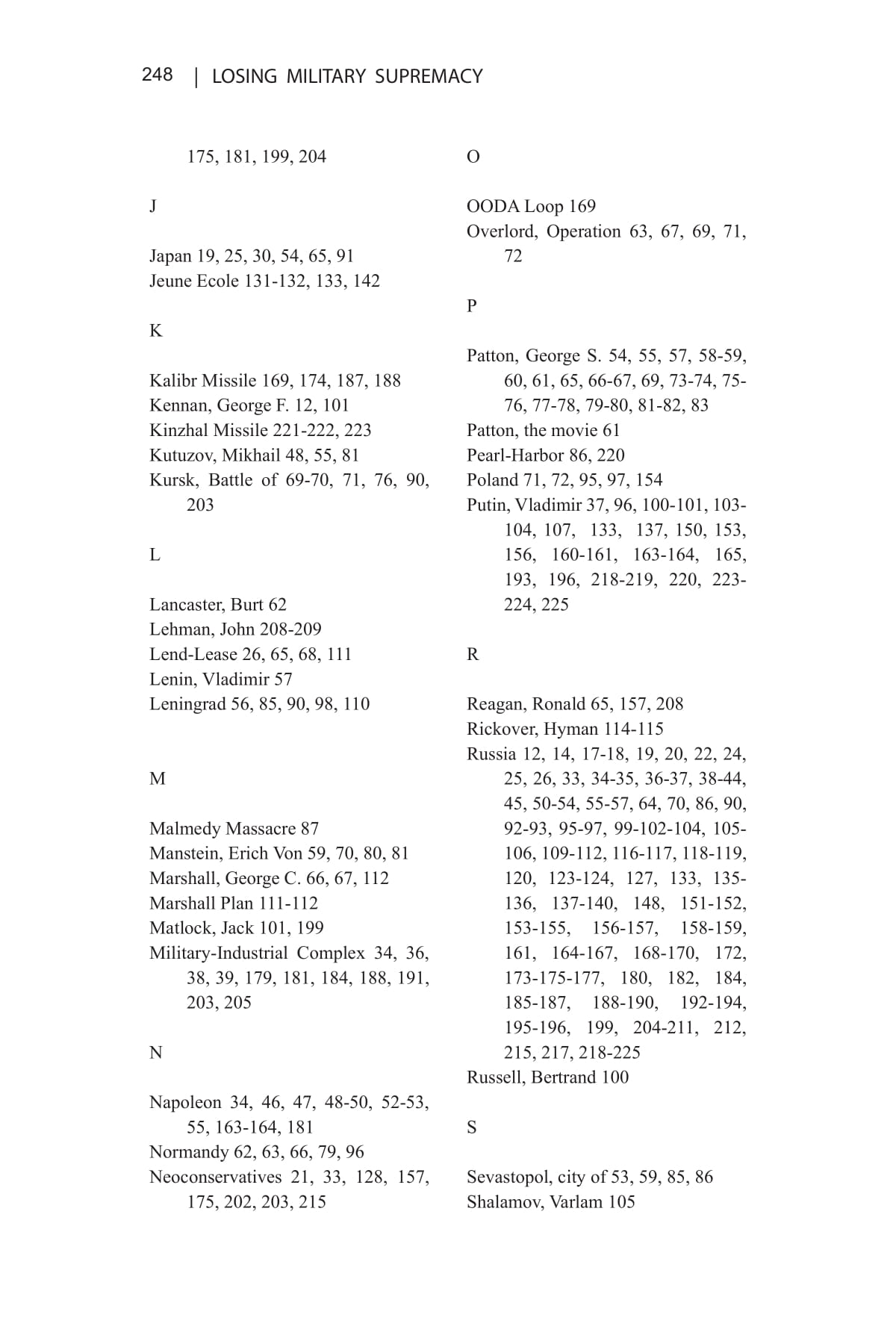 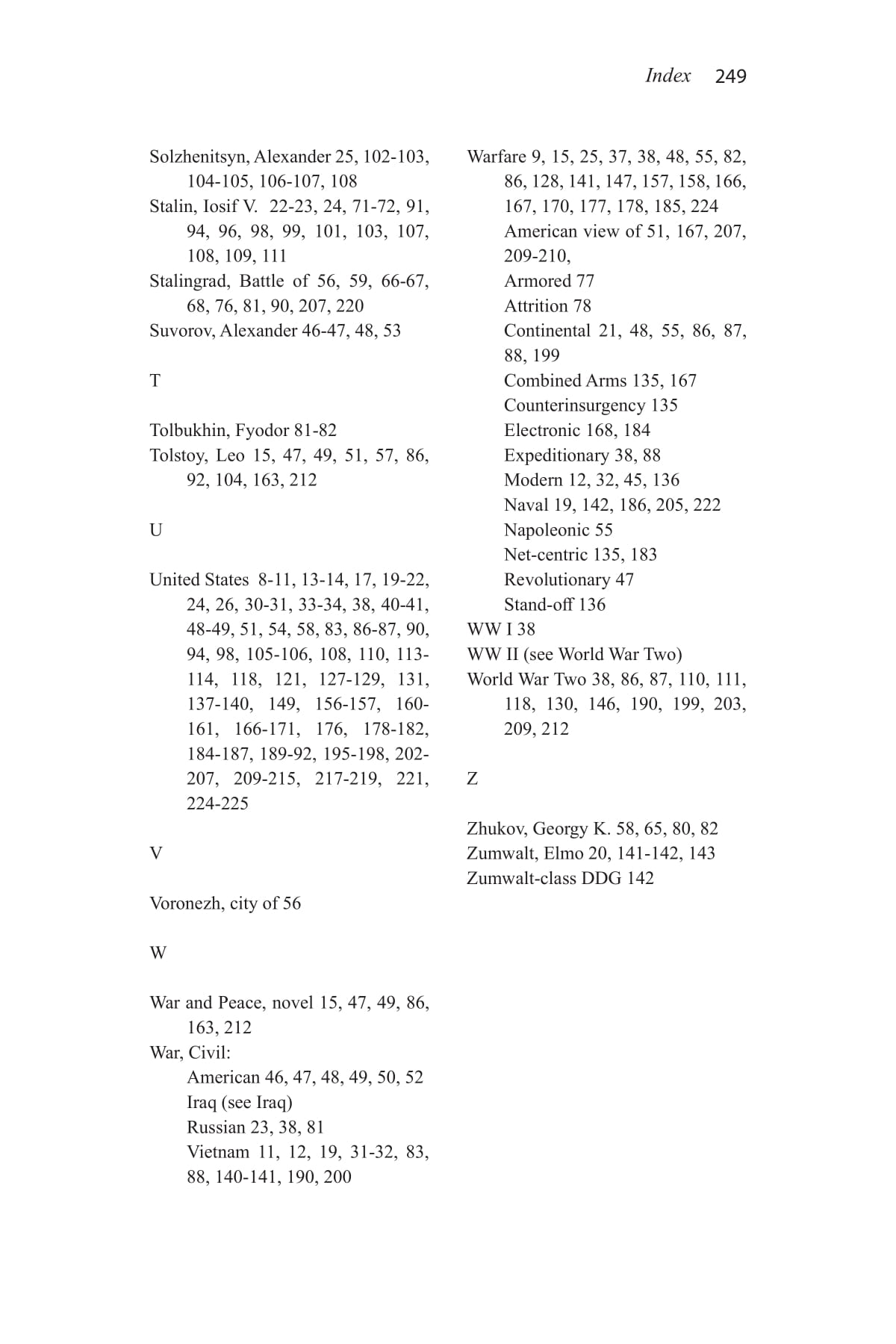 The technological dimension of American “strategy” has completely overshadowed any concern with the social, cultural, operational and even tactical requirements of military (and political) conflict.  With a new Cold War with Russia emerging, the United States enters a new period of geopolitical turbulence completely unprepared in any meaningful way—intellectually, economically, militarily or culturally—to face a reality which was hidden for the last 70+ years

“Martyanov’s must-read book is the ultimate Weapon of Myth Destruction (WMD). And unlike the Saddam Hussein version, this one actually exists.”
PEPE ESCOBAR, AsiaTimes

“The arrogant hubris of American exceptionalism and the myths that sustain it are subjected to devastating analysis in this long overdue book.”
PAUL CRAIG ROBERTS, “A Book for our Time”

American exceptionalist culture has deep roots in the American founding, which even Alexis De Tocqueville observed in his seminal work in 1837. While exceptionalism is not unique to America, the intensity of their conviction and its global ramifications are. This view of its exceptionalism has led the US to grossly misinterpret—sometimes deliberately—the causative factors of key events of the past two centuries. Accordingly, the wrong conclusions have been derived, and very wrong lessons learned. Nowhere has this been more manifest than in American military thought and its actual application of military power. Time after time the American military has failed to match lofty declarations about its superiority, producing instead a mediocre record of military accomplishments. Starting from the Korean War the United States hasn’t won a single war against a technologically inferior, but mentally tough enemy.

The technological dimension of American “strategy” has completely overshadowed any concern with the social, cultural, operational and even tactical requirements of military (and political) conflict.  With a new Cold War with Russia emerging, the United States enters a new period of geopolitical turbulence completely unprepared in any meaningful way—intellectually, economically, militarily or culturally—to face a reality which was hidden for the last 70+ years behind the curtain of never-ending Chalabi moments and a strategic delusion concerning Russia, whose history the US viewed through a Solzhenitsified caricature kept alive by a powerful neocon lobby, which even today dominates US policy makers’ minds.

This book
•        explores the dramatic difference between the Russian and US approach to warfare, which manifests itself across the whole spectrum of activities from art and the economy, to the respective national cultures;
•        illustrates the fact that Russian economic, military and cultural realities and power are no longer what American “elites” think they are by addressing Russia’s new and elevated capacities in the areas of traditional warfare as well as cyberwarfare and space; and
•        studies in depth several ways in which the US can simply stumble into conflict with Russia and what must be done to avoid it.

Martyanov’s former Soviet military background enables deep insight into the fundamental issues of warfare and military power as a function of national power—assessed correctly, not through the lens of Wall Street “economic” indices and a FIRE economy, but through the numbers of enclosed technological cycles and culture, much of which has been shaped in Russia by continental warfare and which is practically absent in the US.

An understanding of these serious, fundamental problems may help mitigate the mayhem that an Empire in decline may unleash globally out of both desperation and ignorance.