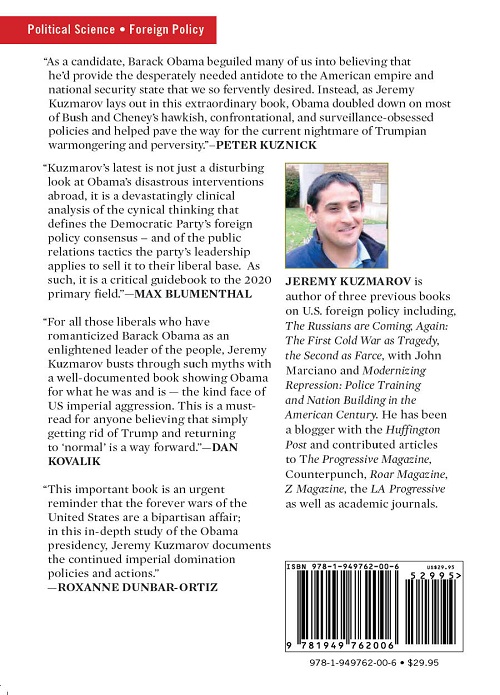 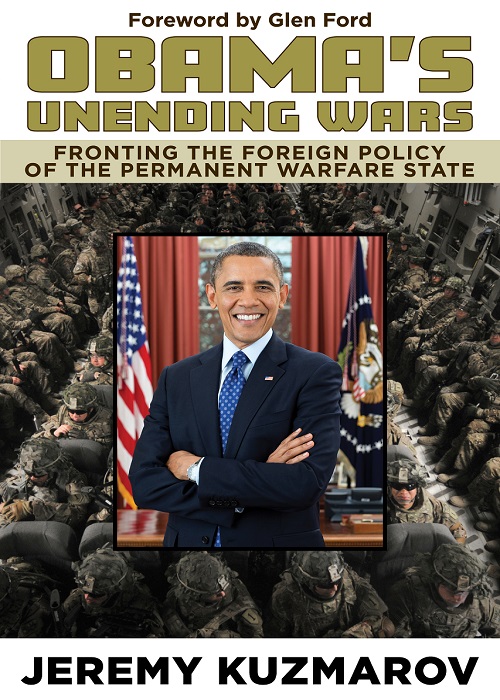 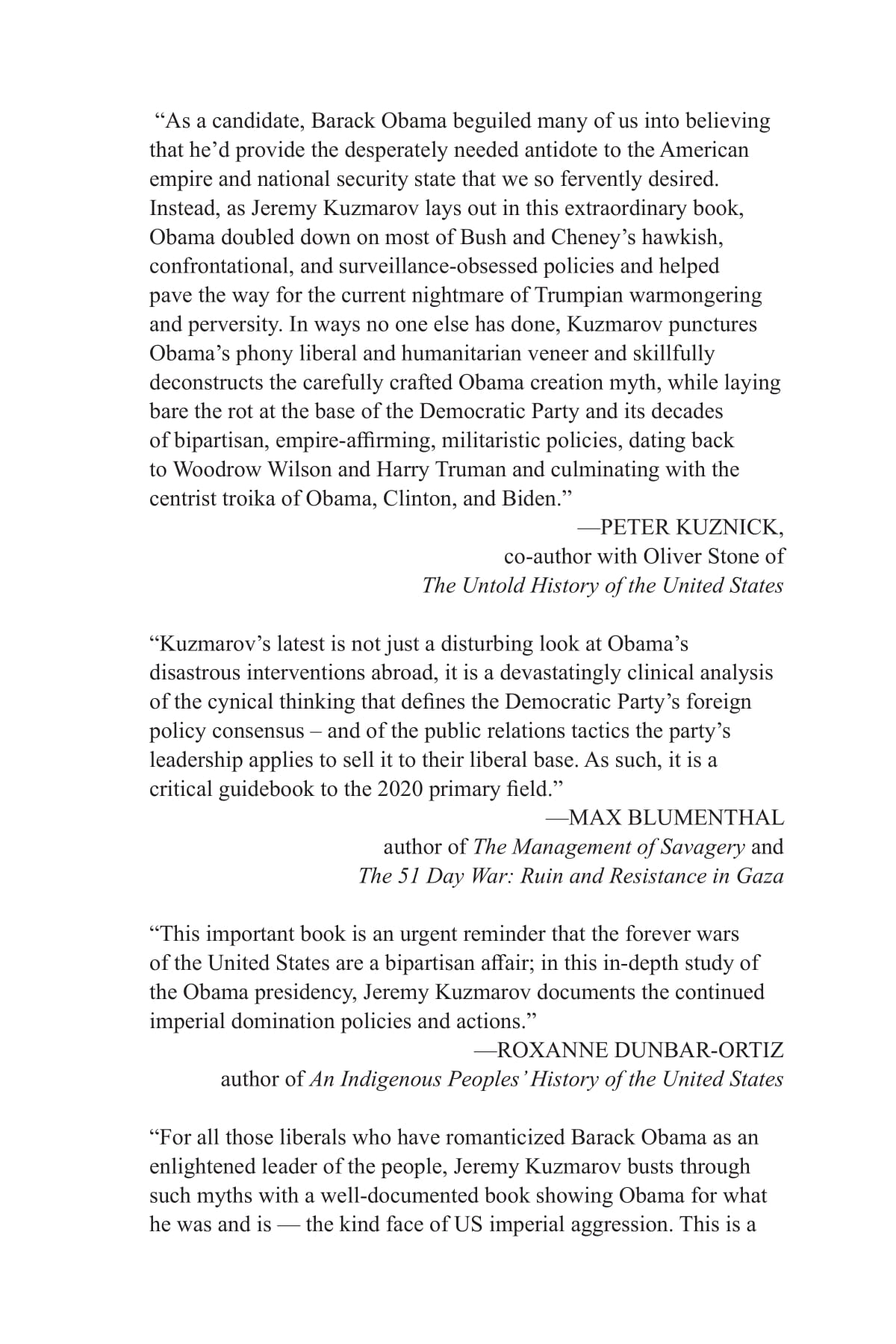 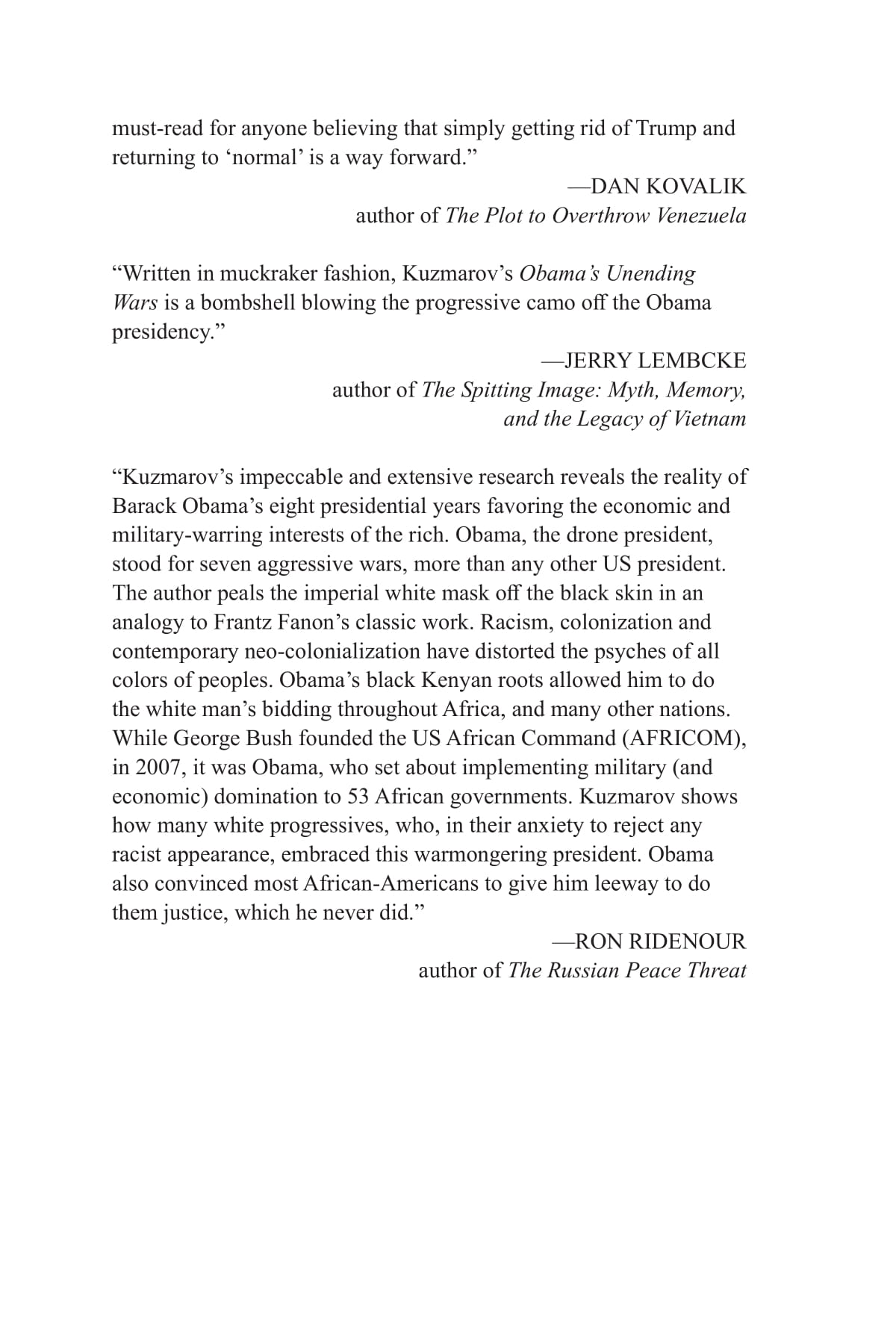 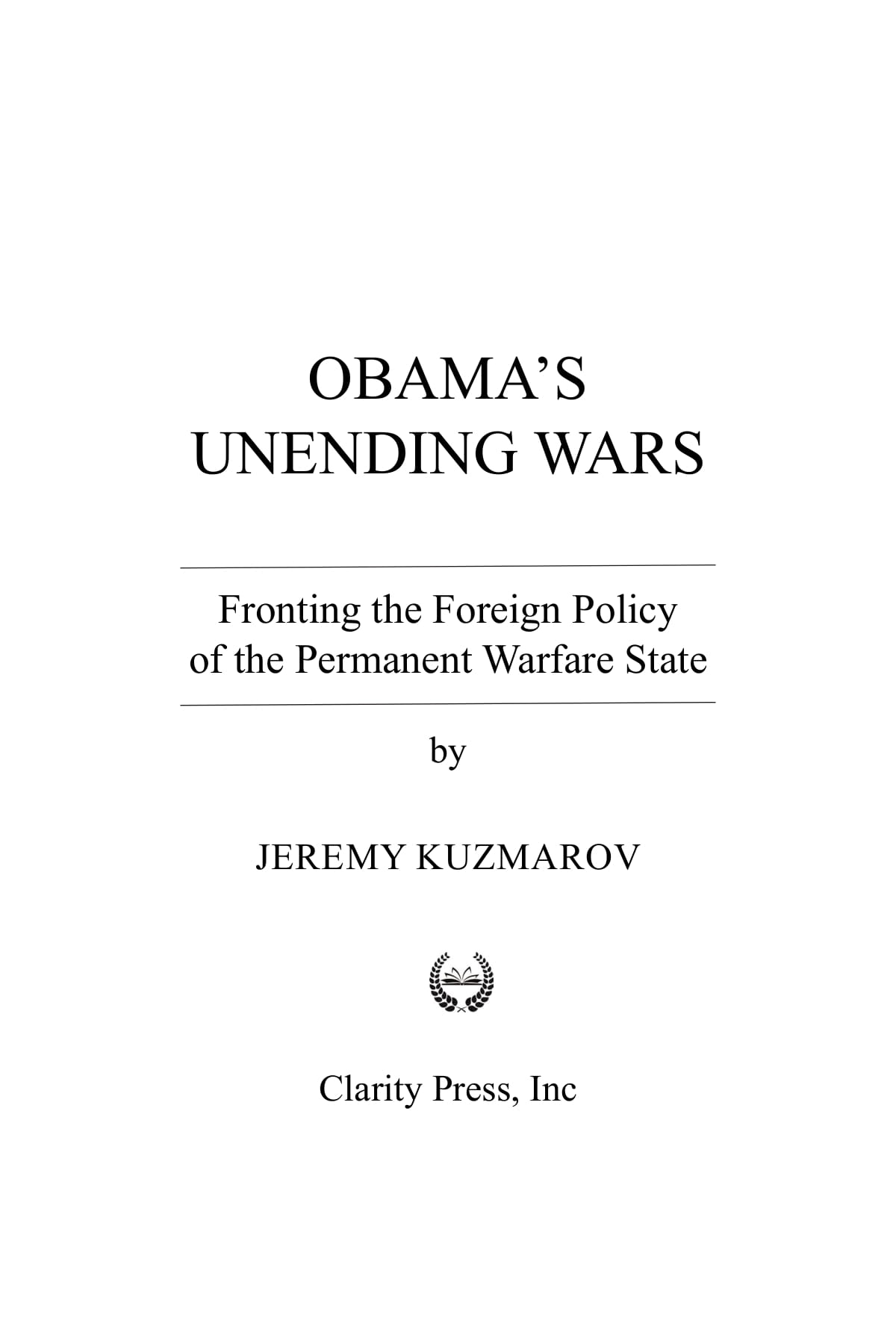 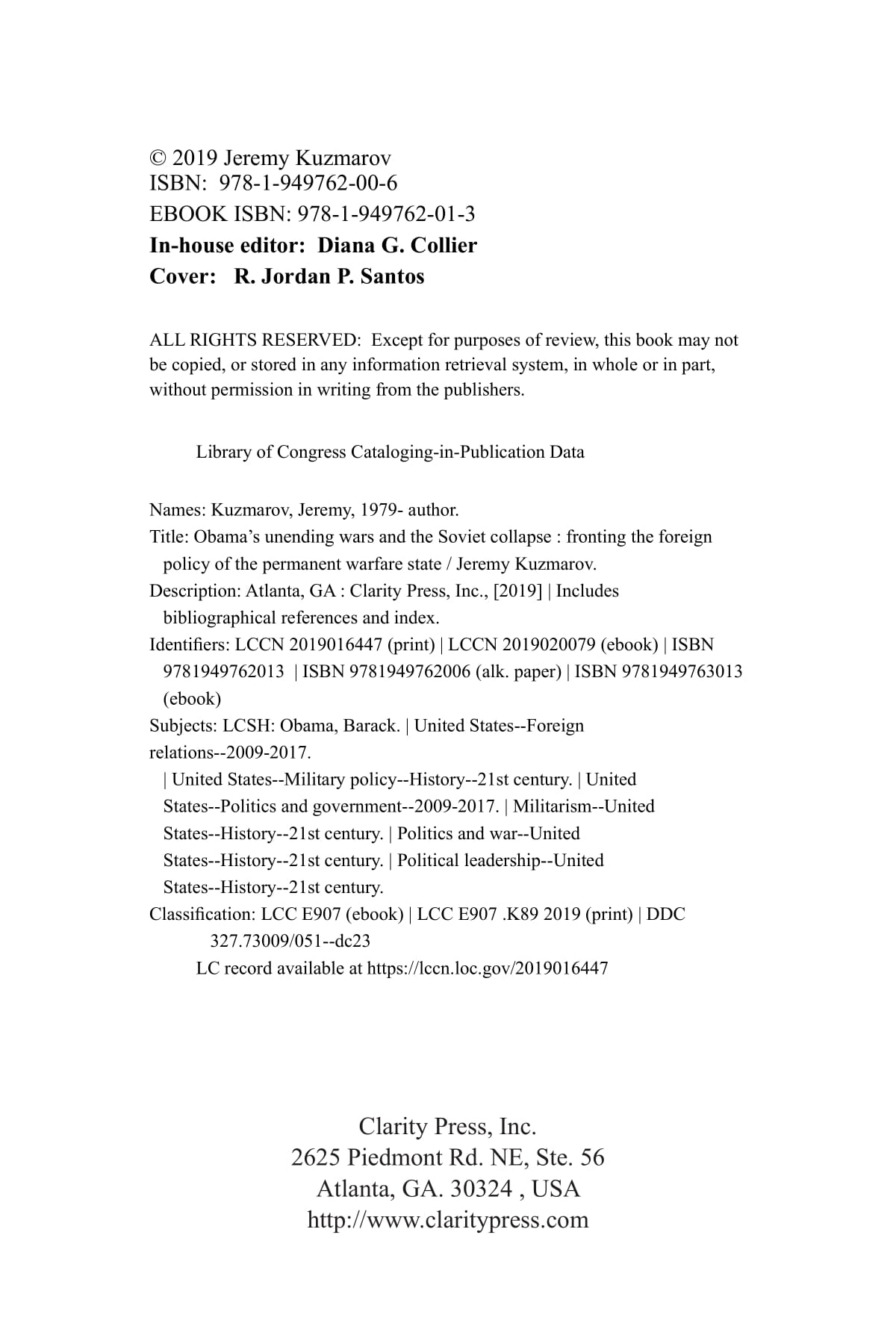 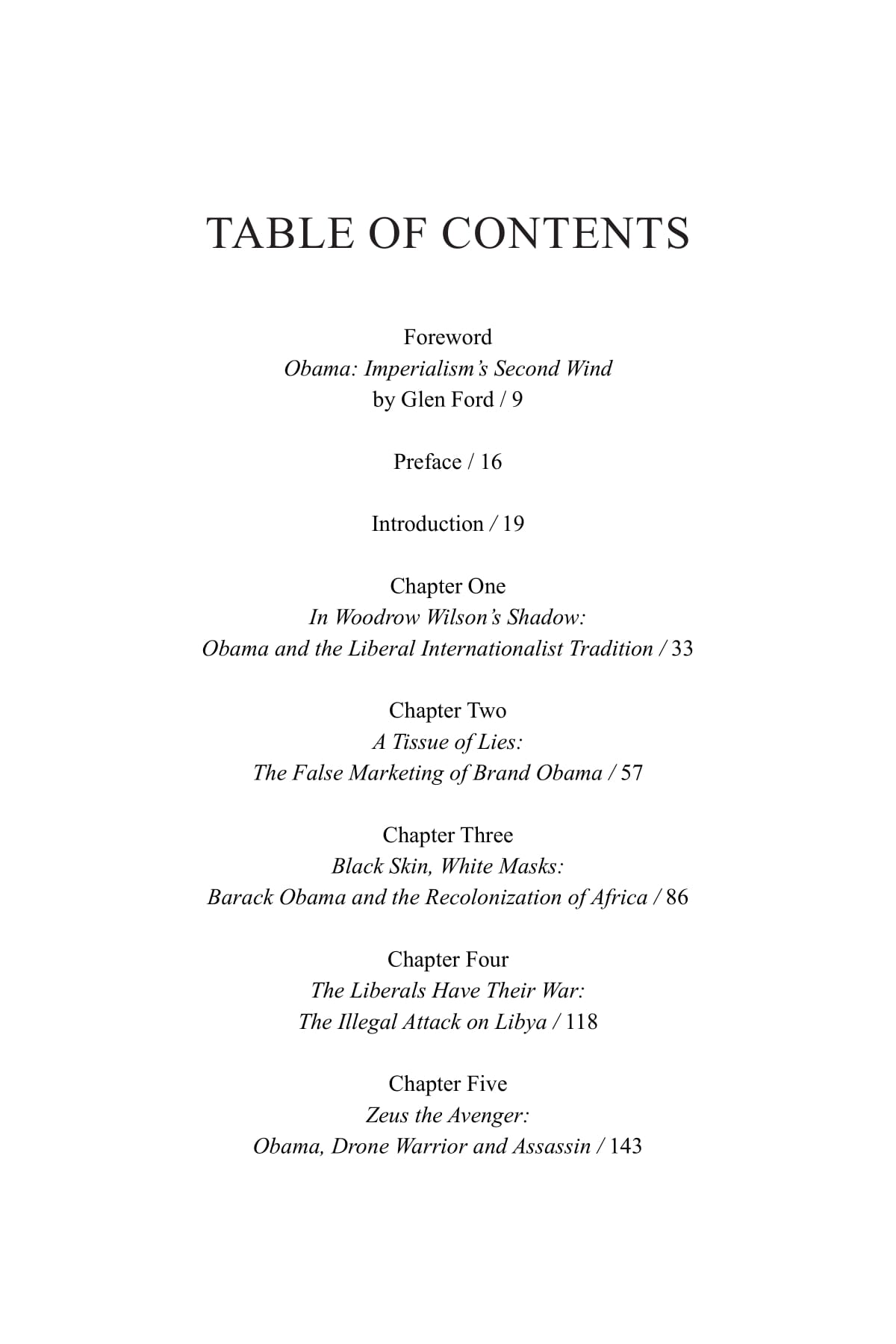 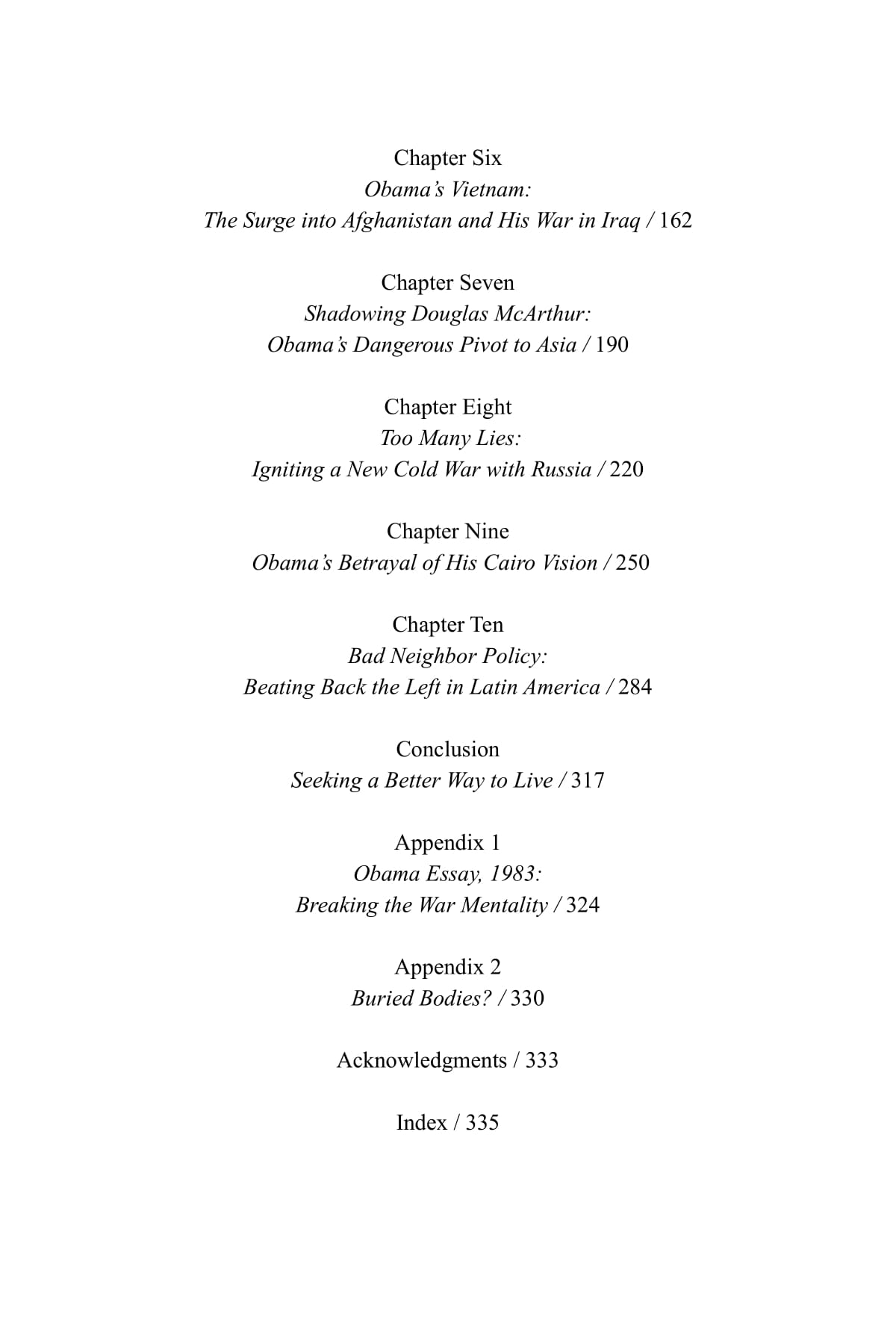 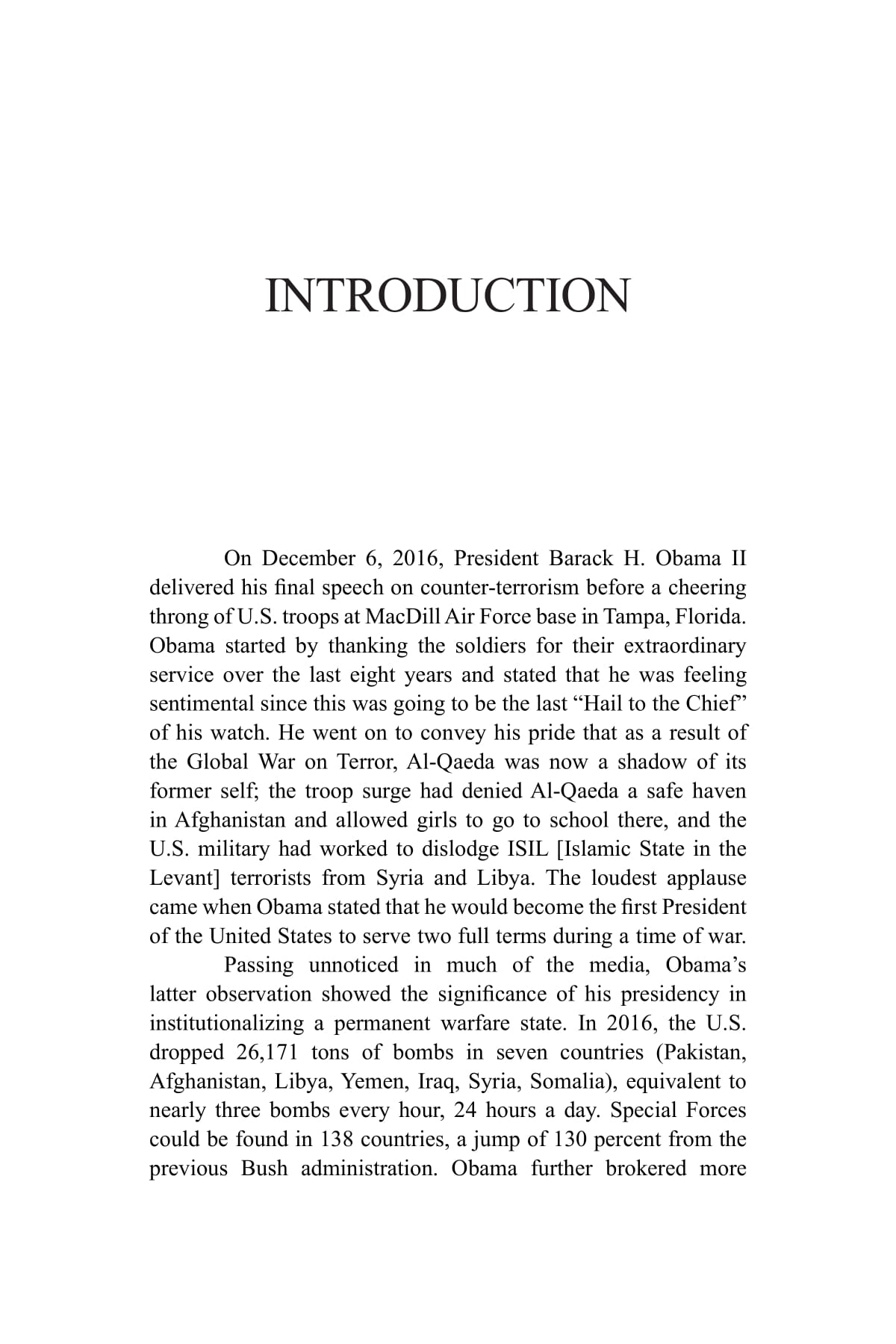 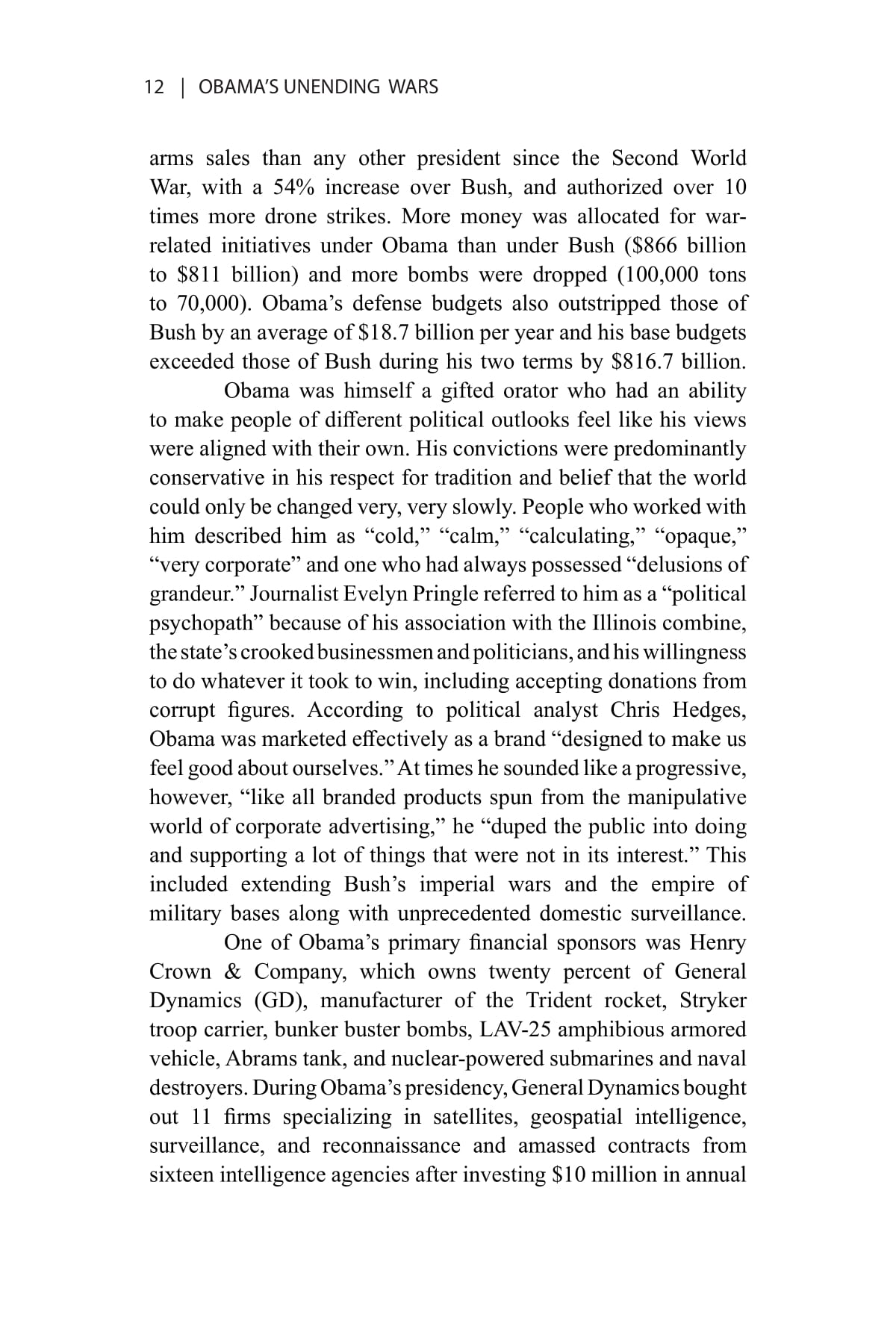 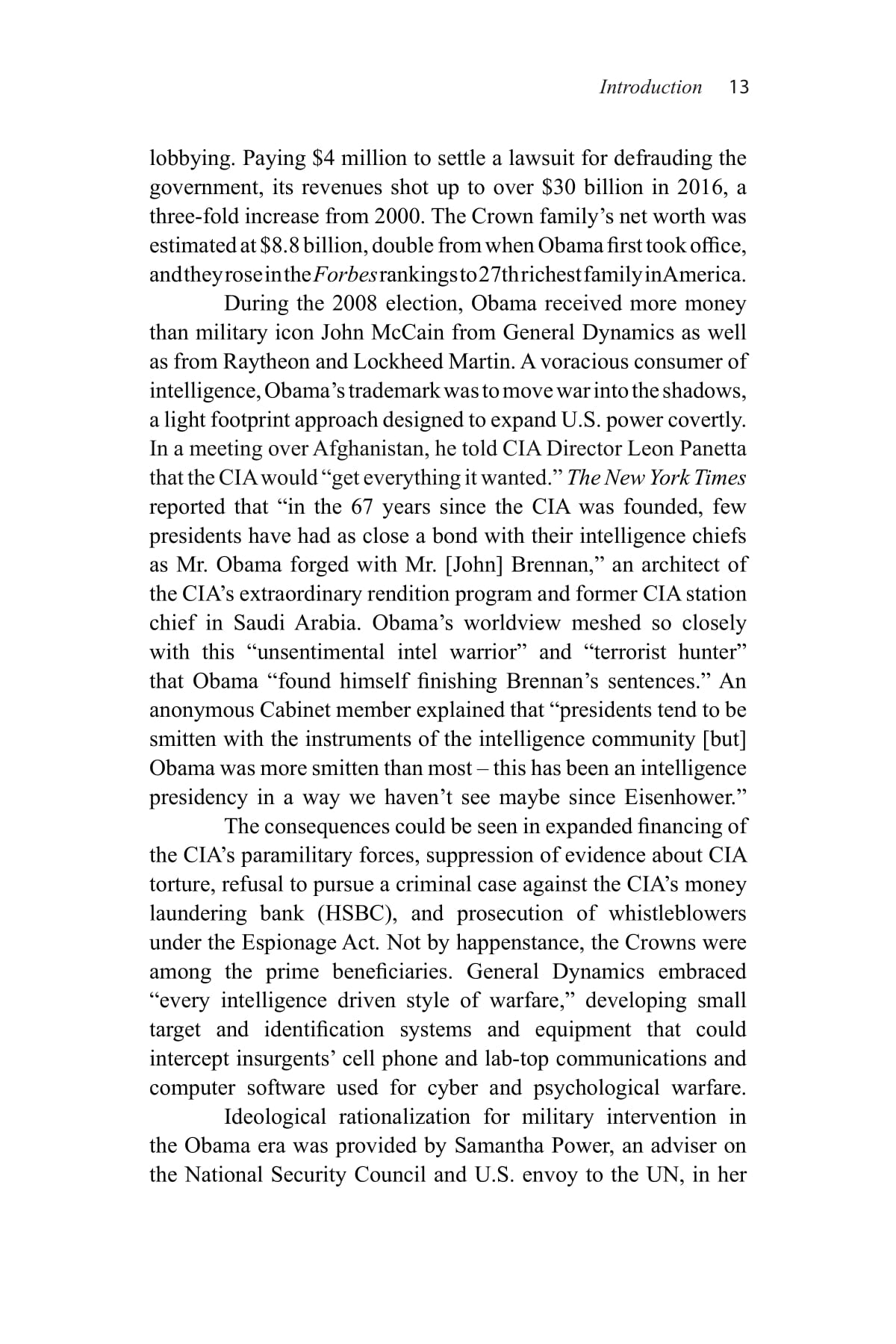 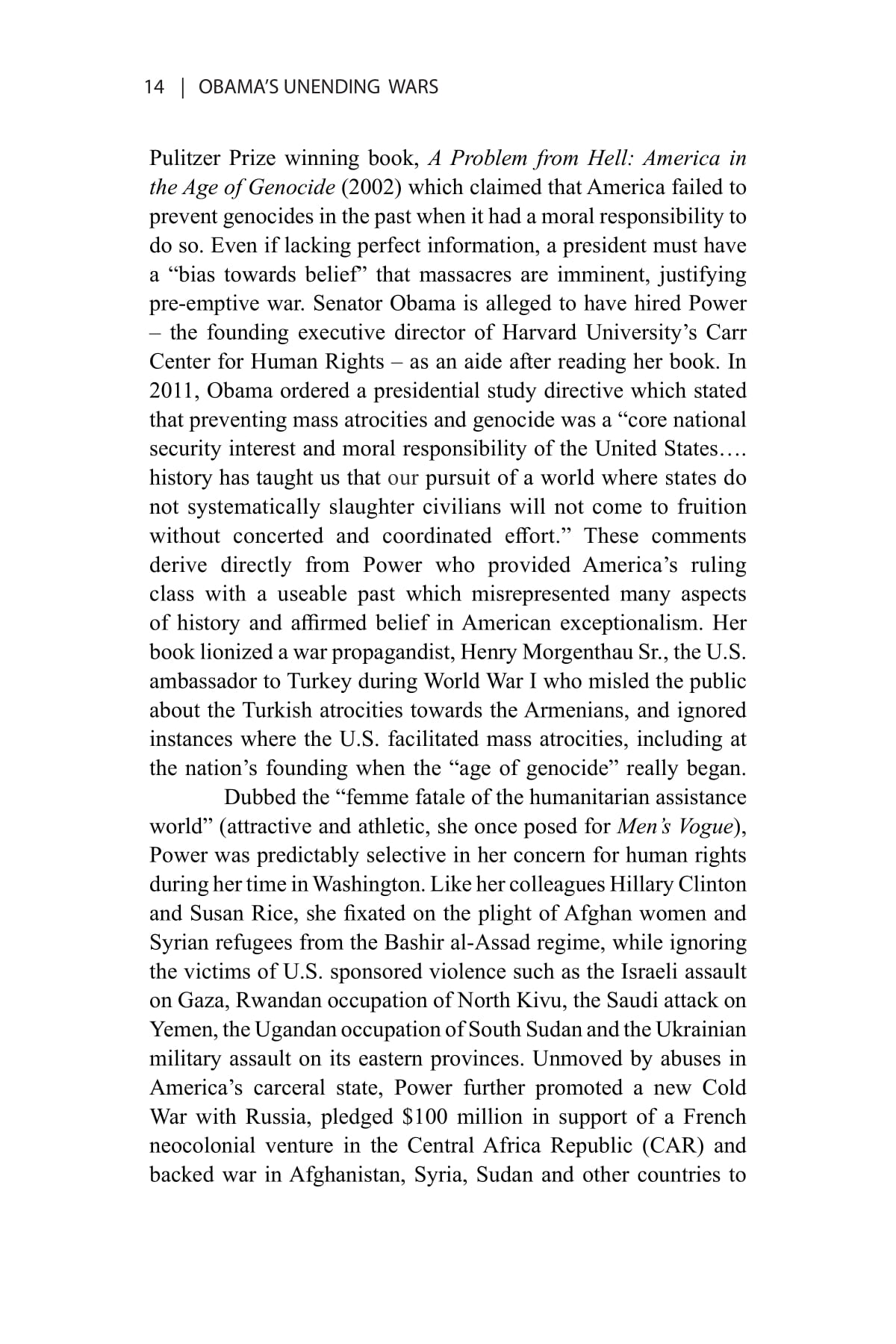 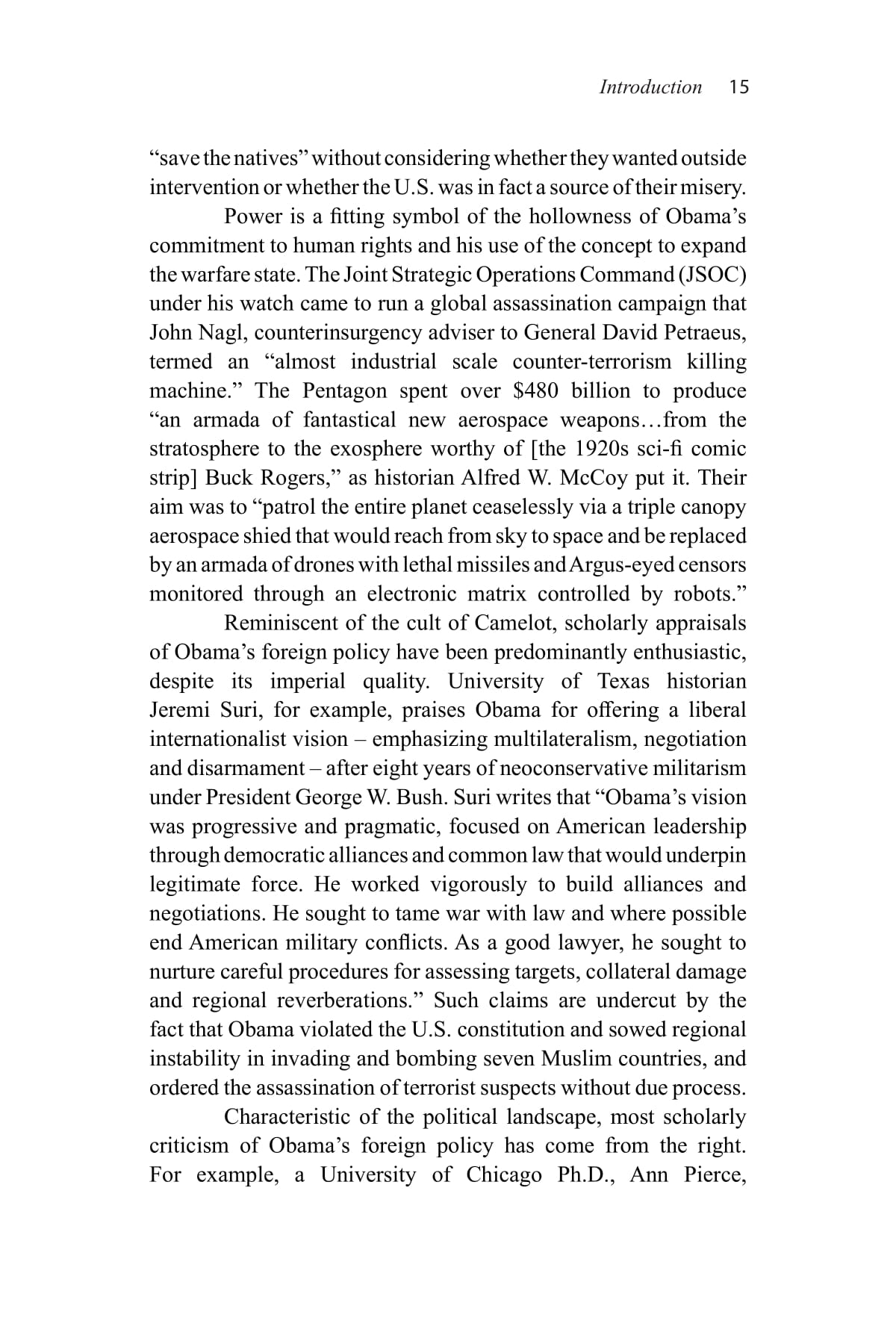 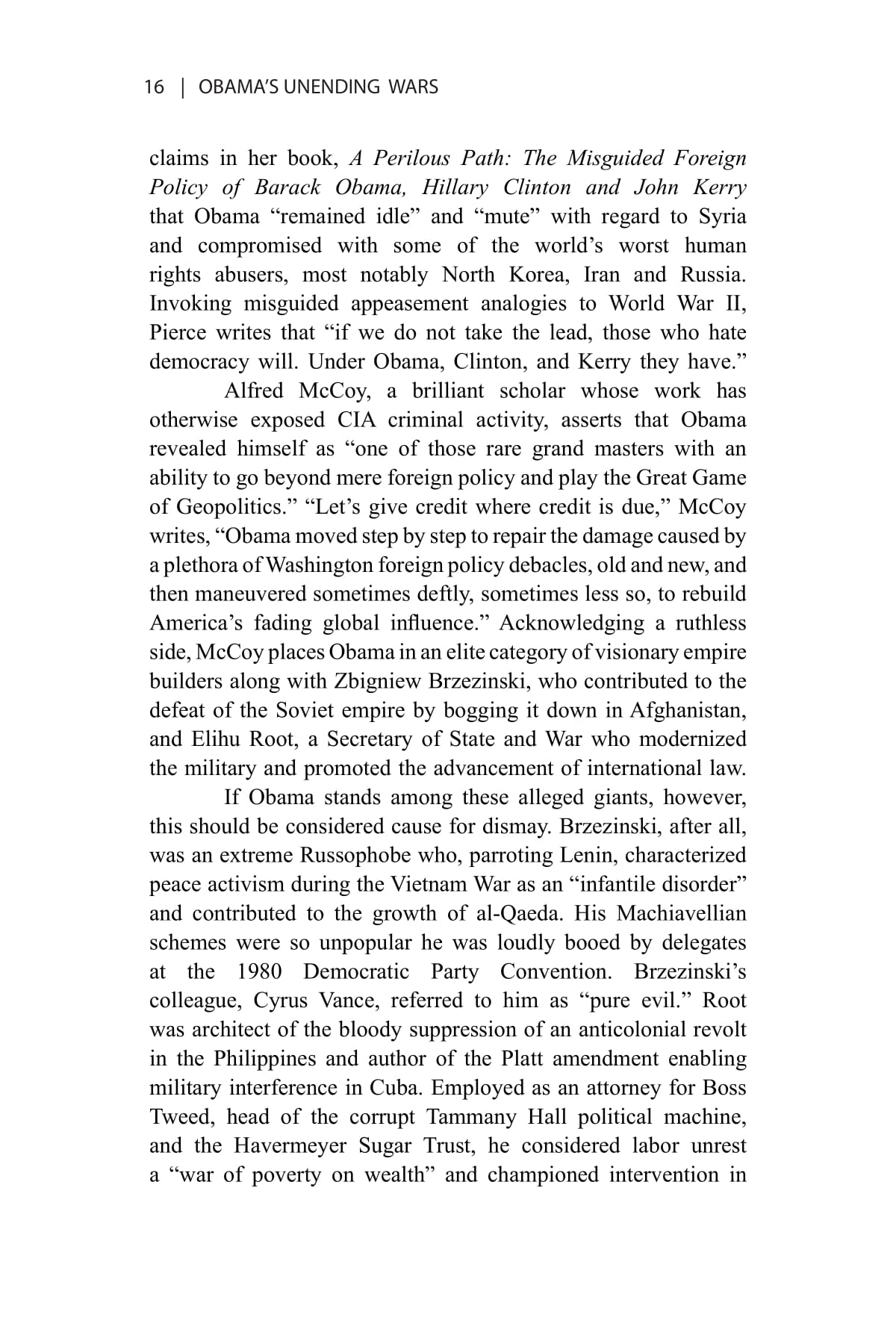 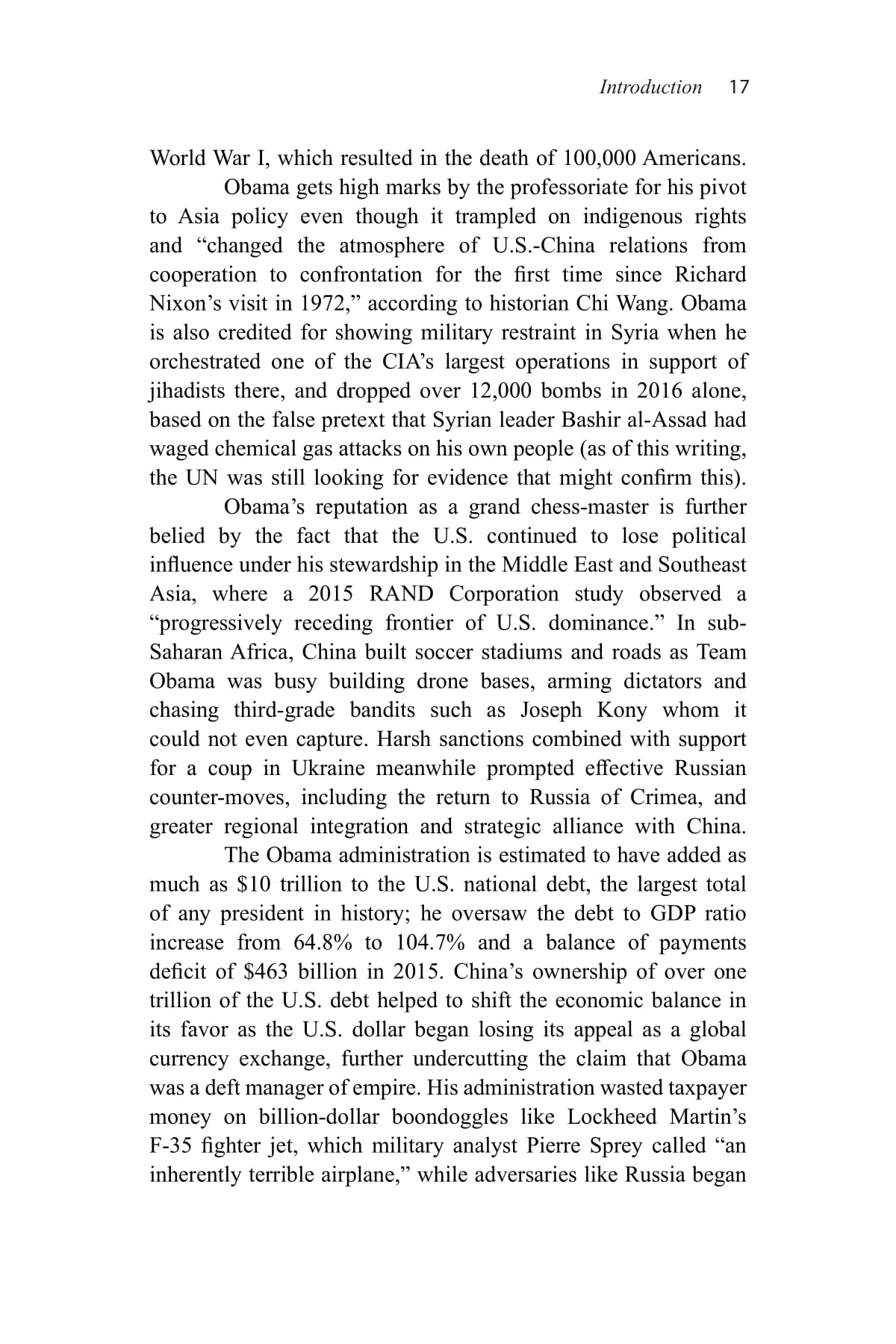 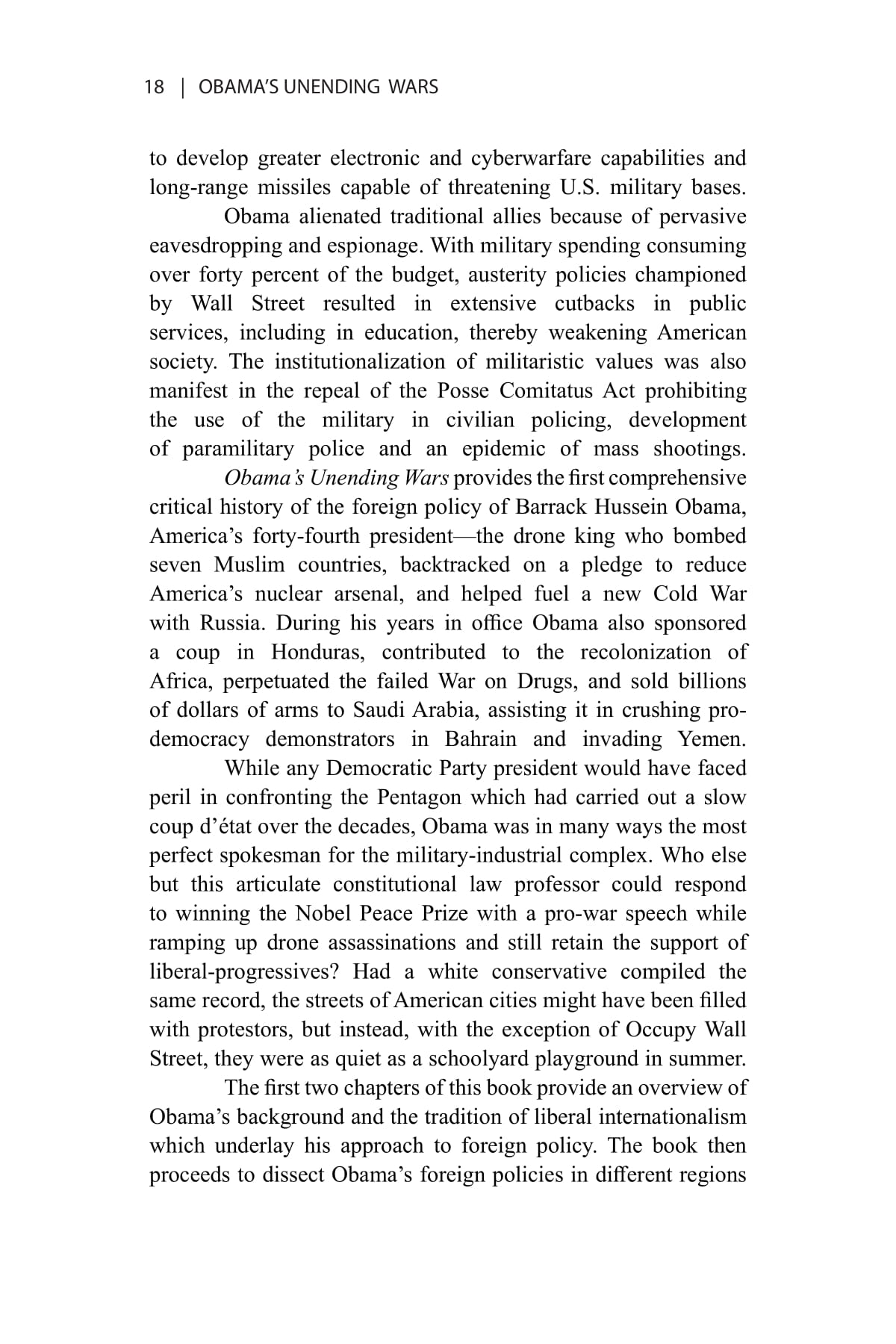 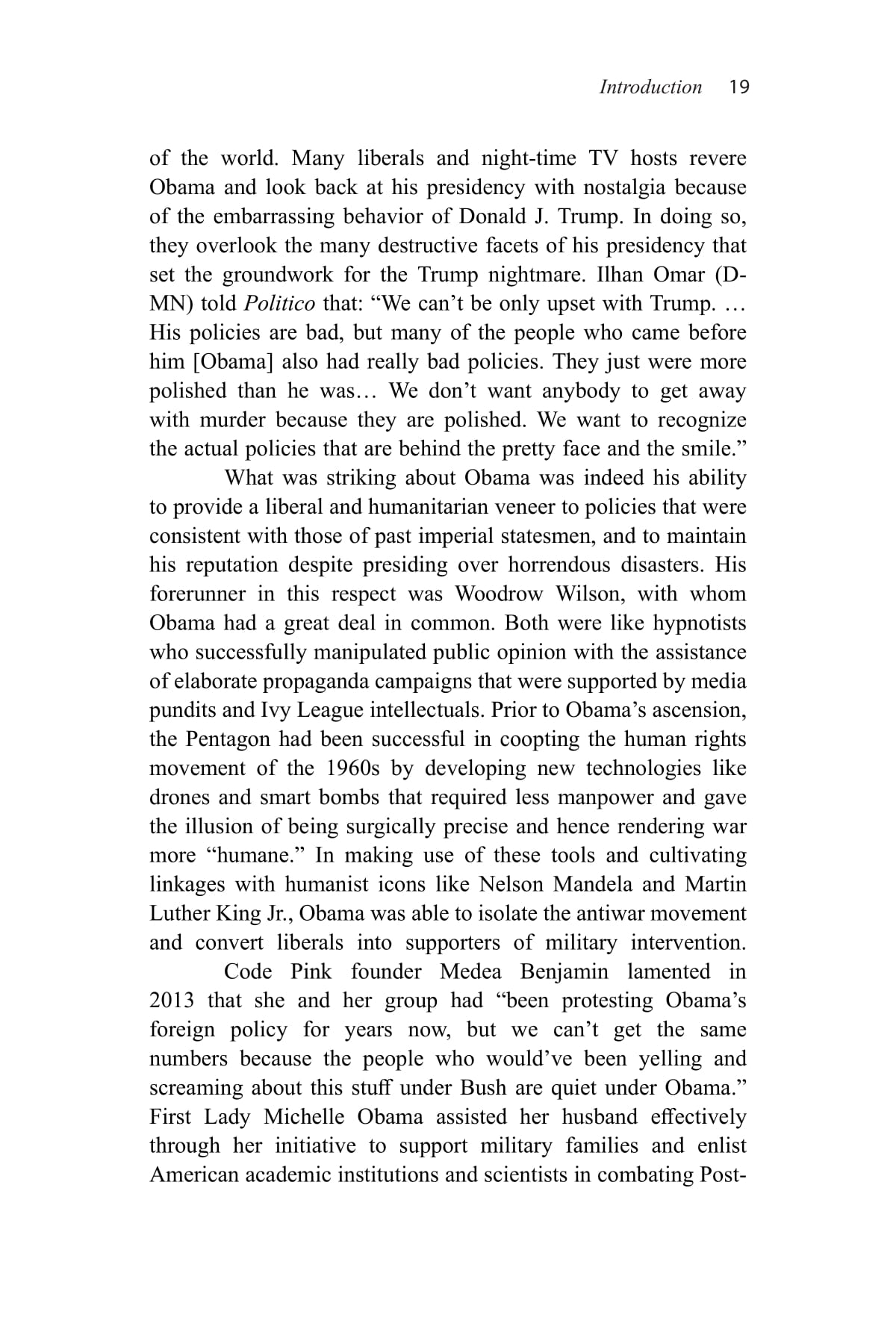 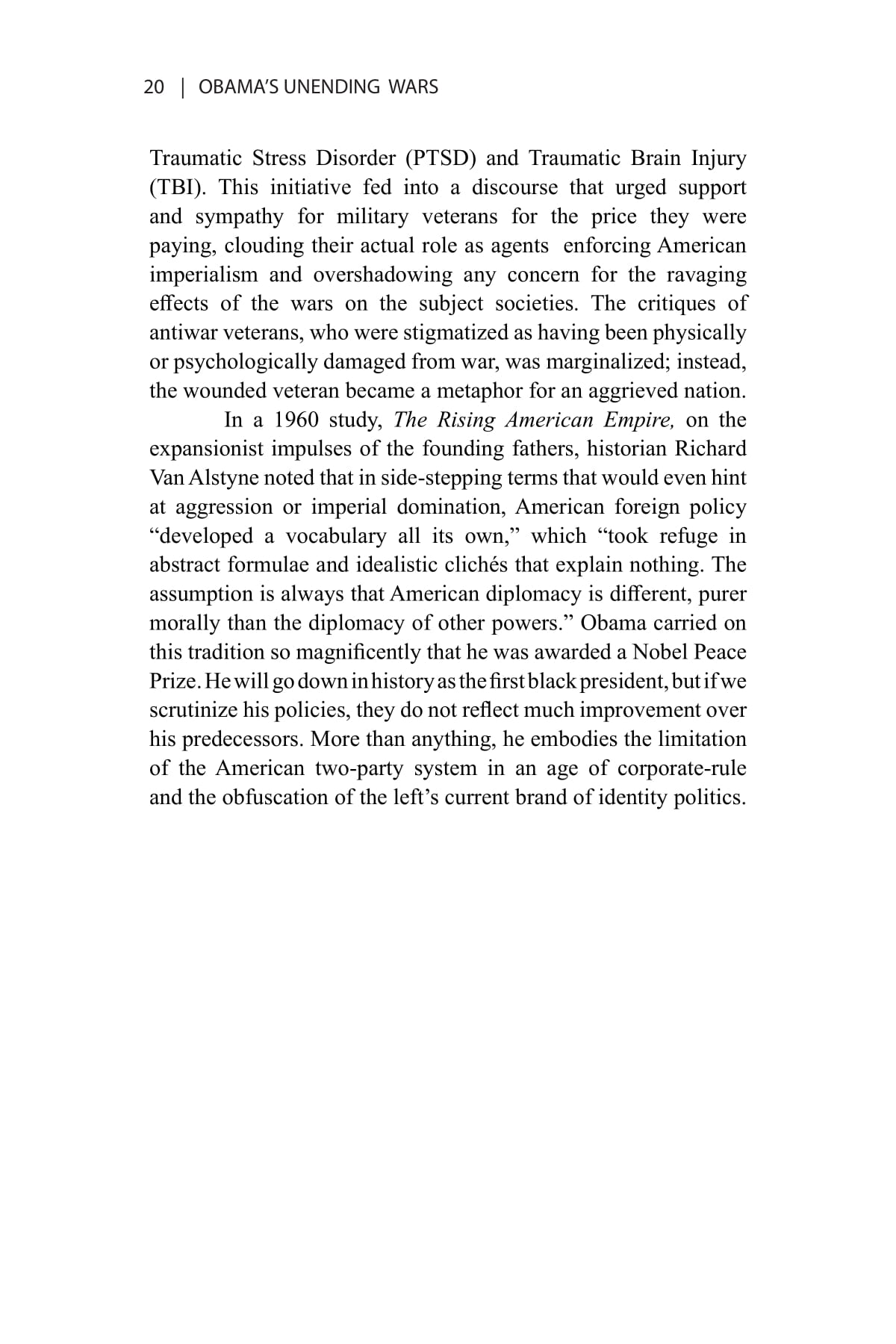 “Kuzmarov’s book is serious and fair and should prompt historians — and the rest of us — to reevaluate Obama’s legacy.”
—BRIAN D’HAESELEER, Washington Post

“In ways no one else has done, Kuzmarov punctures Obama’s phony liberal and humanitarian veneer and skillfully deconstructs the carefully crafted Obama creation myth…” — PETER KUZNICK, co-author with Oliver Stone of The Untold History of the United States

“Barack Obama seemed skeptical of militarism, but then bombed Libya & Syria, sent more troops to Iraq and Afghanistan & escalated Cold War with Russia. Why and how? Read Obama’s Unending Wars: Fronting the Foreign Policy of the Permanent Warfare State.” — STEPHEN KINZER
“Kuzmarov shows how many white progressives, who, in their anxiety to reject any racist appearance, embraced this warmongering president. Obama also convinced most African-Americans to give him leeway to do them justice, which he never did. ” — RON RIDENOUR, Black Agenda Report
“Kuzmarov’s latest is not just a disturbing look at Obama’s disastrous interventions abroad, it is a devastatingly clinical analysis of the cynical thinking that defines the Democratic Party’s foreign policy consensus – and of the public relations tactics the party’s leadership applies to sell it to their liberal base. As such, it is a critical guidebook to the 2020 primary field. “
— MAX BLUMENTHAL, author of The Management of Savagery

“For all those liberals who have romanticized Barack Obama as an enlightened leader of the people, Jeremy Kuzmarov busts through such myths with a well-documented book showing Obama for what he was and is — the kind face of US imperial aggression.  This is a must-read for anyone believing that simply getting rid of Trump and returning to ‘normal’ is a way forward.”—DAN KOVALIK, author of The Plot to Control the World

“This important book is an urgent reminder that the forever wars of the United States are a bipartisan affair; in this in-depth study of the Obama presidency, Jeremy Kuzmarov documents the continued imperial domination policies and actions.”—ROXANNE DUNBAR-ORTIZ, author of An Indigenous Peoples’ History of the United States
“Clarity Press is a good publisher for authors willing to provide real information in place of the officially sanctioned controlled explanations of our time. A current example is Jeremy Kuzmarov’s assessment of Obama, Obama’s Unending Wars. The forty-fourth president comes across as a successful front man for corporate rule and Washington’s imperialism.” —PAUL CRAIG ROBERTS 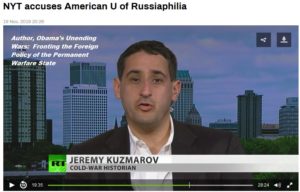 Many academics consider Obama to have been a master foreign policy strategist and shrewd practitioner of the art of realpolitik. This book demonstrates, however, that Obama in reality helped to institutionalize a permanent warfare state that resulted in gross human rights violations and contributed to America’s strategic decline. His perpetuation of the War on Terror created more enemies and prompted the United States to lose influence in the Middle East. His Pivot to Asia policy intensified prospects for regional war while his unnecessary and willful military intervention destroyed Libya and drew the Russians in to protect Bashir al-Assad who won Syria’s civil war. The Obama administration’s heavy-handed interference in Ukraine led to effective Russian counter-moves, promoting a strategic alliance with China  and regional integration that is moving the world towards multi-polarity.

Obama’s Unending Wars provides the first comprehensive critical history of the foreign policy of America’s forty-fourth president – the drone king who ordered the bombing of seven Muslim countries, backtracked on a pledge to reduce America’s nuclear arsenal, and helped fuel a new Cold War with Russia. Obama during his years in office provided billions of dollars in arms sales to Saudi Arabia as it assisted in the crushing of pro-democracy demonstrators in Bahrain and invaded Yemen.  He sanctioned a coup in Honduras which plunged that country into chaos, perpetuated a failed drug war policy and contributed to the recolonization of Africa.

While any Democratic Party president would have faced peril in confronting the Pentagon which had carried out a slow coup d’état over the decades, Obama was rather, in many ways, the most perfect spokesman for the military-industrial complex. Who else but this articulate constitutional law professor could pull off  a pro-war speech after winning the Nobel Peace Prize while ramping up drone assassinations and America’s network of military bases in Africa and still retain the support of liberal-progressives?

As many in the time of Trump now glance nostalgically back to the Obama presidency, this book will help them to see the continuity — and continuous failure — of American foreign policy irrespective of the party or figurehead representing it.

JEREMY KUZMAROV is author of three previous books on U.S. foreign policy including:The Russians are Coming, Again: The First Cold War as Tragedy, the Second as Farce, with John Marciano (Monthly Review Press, 2018), Modernizing Repression: Police Training and Nation Building in the American Century (University of Massachusetts Press, 2012) and The Myth of the Addicted Army: Vietnam and the Modern War on Drugs (University of Massachusetts, 2009). He has been a blogger with the Huffington Post and contributed articles to The Progressive Magazine, Counterpunch, Roar Magazine, Z Magazine, the LA Progressive as well as academic journals and local newspapers in Oklahoma. He is also a co-author of essays on Korean, Vietnam, Reagan's Central American wars and World War I for a peace history website.