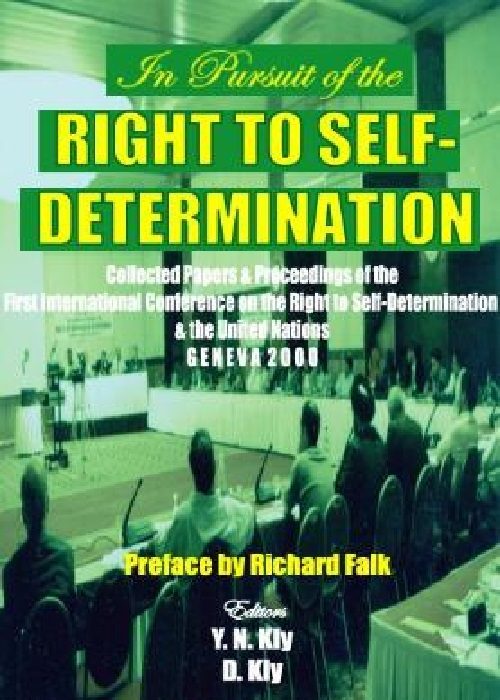 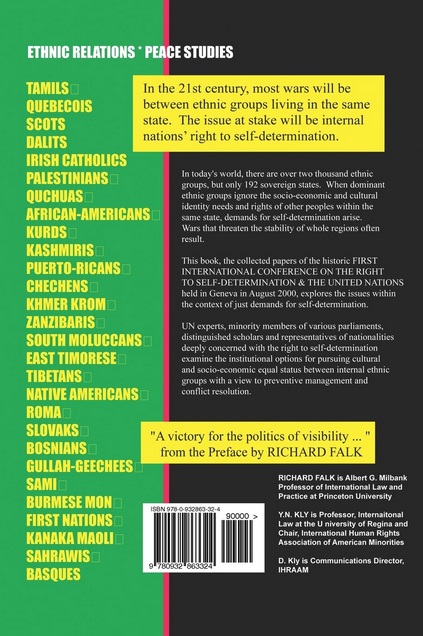 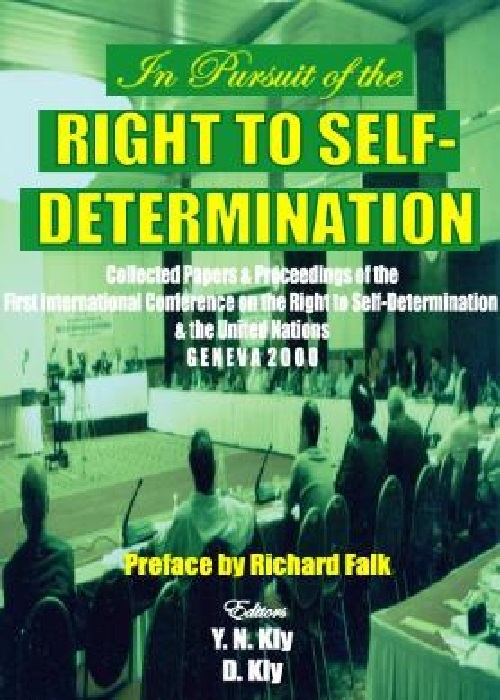 This book, the collected papers of the historic FIRST INTERNATIONAL CONFERENCE ON THE RIGHT TO SELF-DETERMINATION & THE UNITED NATIONS held in Geneva in August 2000, explores the issues within the context of just demands for self-determination.

“More than any recent occasion, the First International Conference on the Right to Self-determination &amp; the United Nations, held in Geneva during the millennial year 2000, dramatized the range of claims and the severity of suffering associated with their denial under a variety of statist and geopolitical pretexts… a truly historical contribution.”

From the Preface by RICHARD FALK

“This is a book with a purpose: to advance a proposal for considering and resolving self-determination conflicts.”

In today’s world, there are over two thousand ethnic groups, but only 192 sovereign states. When dominant ethnic groups ignore the socio-economic and cultural identity needs and rights of other peoples within the same state, demands for self-determination arise. Wars that threaten the stability of whole regions often result.

This book, the collected papers of the historic FIRST INTERNATIONAL CONFERENCE ON THE RIGHT TO SELF-DETERMINATION & THE UNITED NATIONS held in Geneva in August 2000, explores the issues within the context of just demands for self-determination. UN experts, minority members of various parliaments, distinguished scholars and representatives of nationalities deeply concerned with the right to self-determination examine the institutional options for pursuing cultural and socio-economic equal status between internal ethnic groups with a view to preventive management and conflict resolution.

Suzette Bronkhurst of the Magenta Foundation, Netherlands, is a former chief editor of a Dutch Green Party publication, and initiator and general manager of the Internet Centre Anti-Racism (I-CARE).

Erica-Irene A. Daes is a Special Rapporteur of the UN Sub-Commission on Human Rights, and former Chairperson of the Working Group on Indigenous Populations which drafted the UN Declaration on the Rights of Indigenous Peoples. She submitted a UN-commissioned Study on the Protection of the Culture and Intellectual Property of Indigenous Peoples in 1993.

Kenneth Deer is currently publisher/editor of the newspaper The Eastern Door, and a citizen of the Mohawk Nation at Kahnawake. He has many years of experience at the international level representing his community.

André Frankovits is Executive Director of the Human Rights Council of Australia.

Françoise Jane Hampson is an expert with the United Nations Sub-Commission. She is Professor of Law in the Human Rights Centre, University of Essex, where she teaches international humanitarian law and the law of armed conflicts.

Mehdi M. Imberesh is a Professor in the Social Sciences Faculty of Al-Fateh University, Tripoli. He started his political activities in the People’s Committee of the Jamahiriyan People’s Bureau in Washington, DC during the years 1979-81, was appointed in the capacity of Ameen of the Jamahiriyan People’s Bureau to the Federal Republic of Germany from 1981 to 1986, and since then to the Islamic Republic of Iran.

Y. N. Kly is Chair of IHRAAM and professor of international law at the School of Human Justice of the University of Regina, Canada. He is author of numerous books and articles on minorities and societal development, two of which were named Outstanding Book by the Gustavus Myers Center for the Study of Human Rights, co-sponsored by major U.S. civil rights organizations.

Dr. Hans Koechler, Head of the Philosophy Department at the University of Innsbruck, Austria and Director of the International Progress Organization, Vienna. Since 1998, Professor Koechler has served as member of the Council of Europe’s Expert Group on Democratic Citizenship. As President of IPO, he dealt with the humanitarian issues of the exchange of prisoners of war between Iran and Iraq, and with the issue of Kuwaiti POWs and missing people in Iraq. Since 1972, UN Secretaries-General have acknowledged Professor Koechler’s contribution to international peace in their statements.

Joseph v. Komlóssy is Vice President of the Federal Union of European Nationalities (FUEN), one of the most prestigious NGO-s, with consultative status at the Council of Europe and at the United Nations Organisation, seated at Flensburg, Germany. He is an advocate of ethnic and national minorities, a member of the Working Group on Minorities of the United Nations, regularly attending the sessions
of the Comission on Human Rights. He is present at all parliamentary sessions of the Council of Europe, and participates in the work of OSCE/ODIR in Warsaw and Vienna. His presentations and interventions are guided by the principle: ”Act in time, instead of reacting too late.”

Mme. Ragnhild Nystad is Vice-President of the Sami Parliament, Norway, and also head of political affairs. She was involved in the establishment of the Sami Act (Norway) in 1987 and the Norwegian Constitutional Amendment in 1988 which gives the Sami People in Norway status as indigenous people and the right to establish their own indigenous parliament.

Karen Parker, Chief/Delegate of the International Educational Developmental/Humanitarian Law Project at the United Nations, is an attorney specializing in human rights and humanitarian (armed conflict) law. Her annual “Armed Conflict Around the World: A Country by Country Review” is published by the Parliamentary Human Rights Group (UK) (now on Internet). Her extensive work on self-determination includes studies, Congressional testimony and Court appearances on application of self-determination to the armed struggles in Burma, Kashmir, Acheh, the Moluccas, East Timor, Tibet, Cyprus, Turkey, Western Sahara and Sri Lanka.

George Reid is Deputy Presiding Officer of the Scottish Parliament

Majid Tramboo is a Member of IHRAAM Directorate & Director, International Council for Human Rights, United Kingdom. He is a Barrister practicing in the United Kingdom.

Daniel Turp served as Canadian Member of Parliament and Bloc Quebeçois Critic for Intergovernmental Affairs from 1999-2000 and Bloc Quebeçois spokesperson for Foreign Affairs, 1997-1999. He served as a designated expert on the Belanger-Campeau Commission on the political and constitutional future of Quebec (1991), and on the Commission Studying Questions Related to the Accession of Quebec to Sovereignty, 1992.

2 reviews for IN PURSUIT OF THE RIGHT TO SELF-DETERMINATION