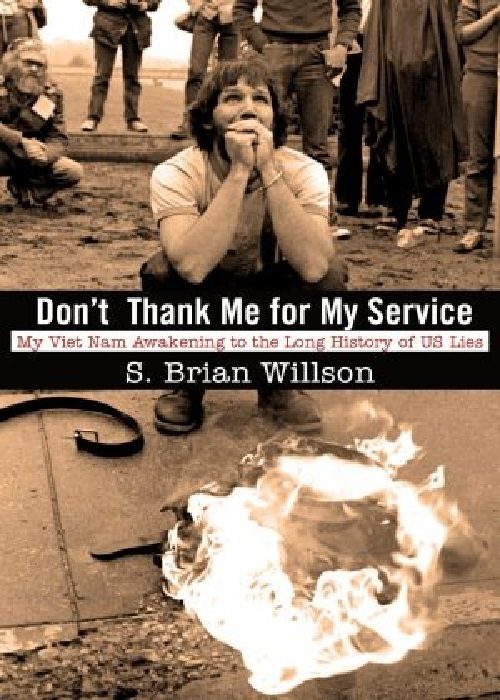 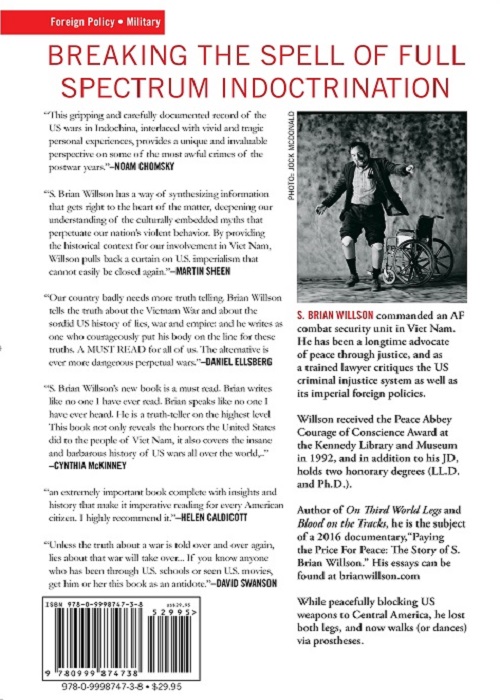 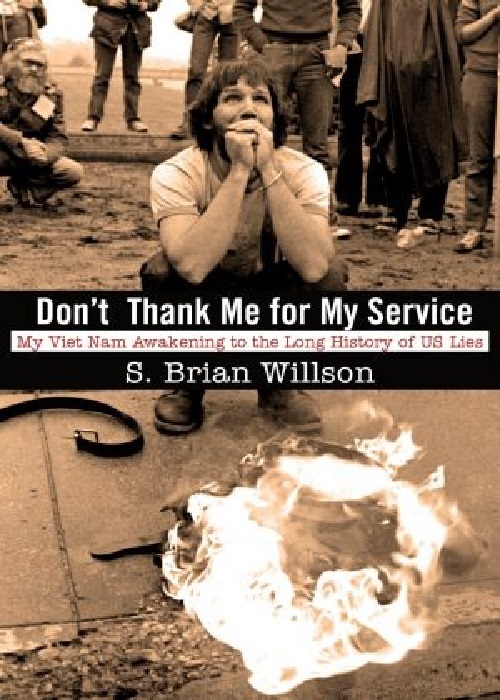 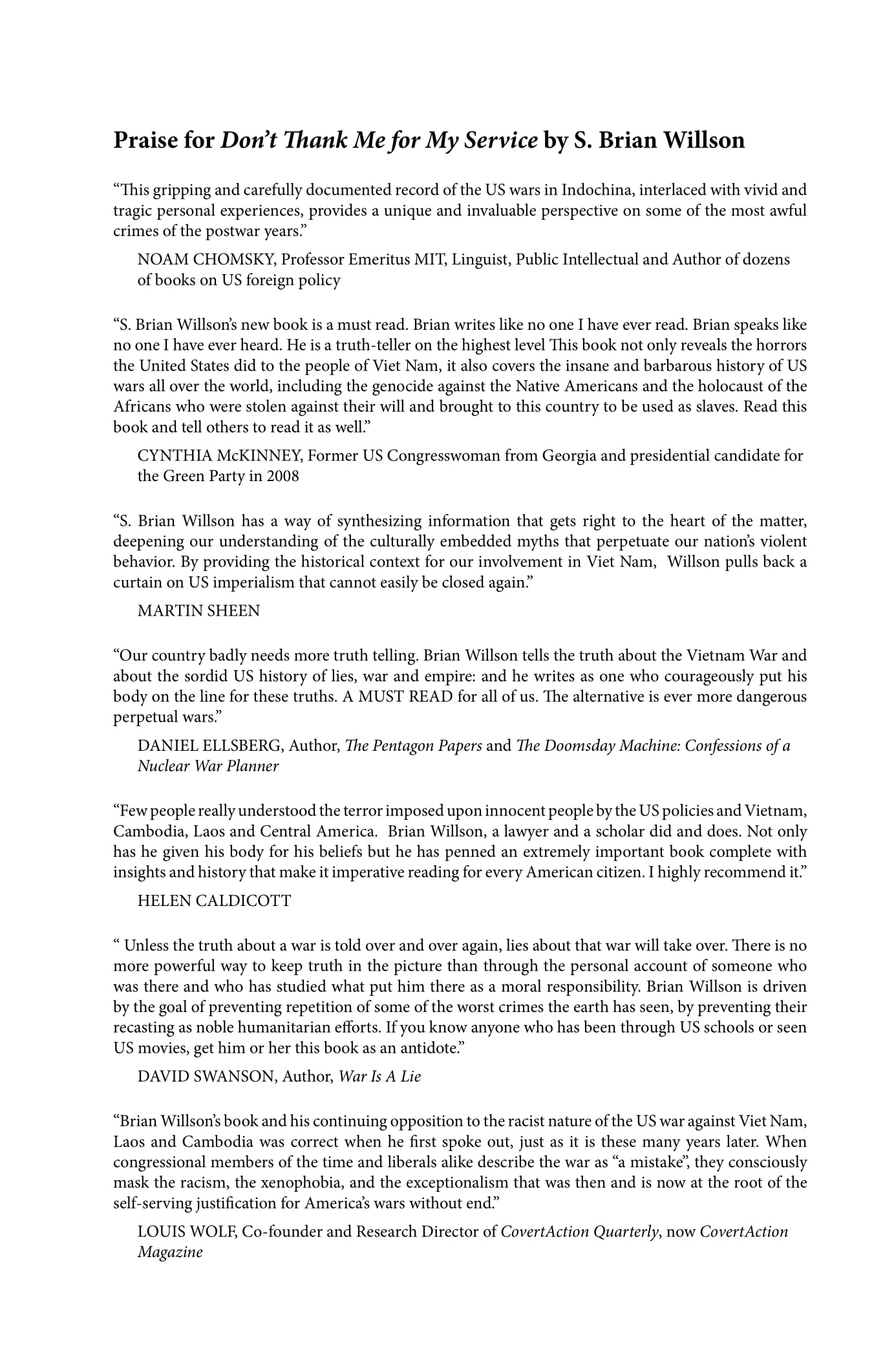 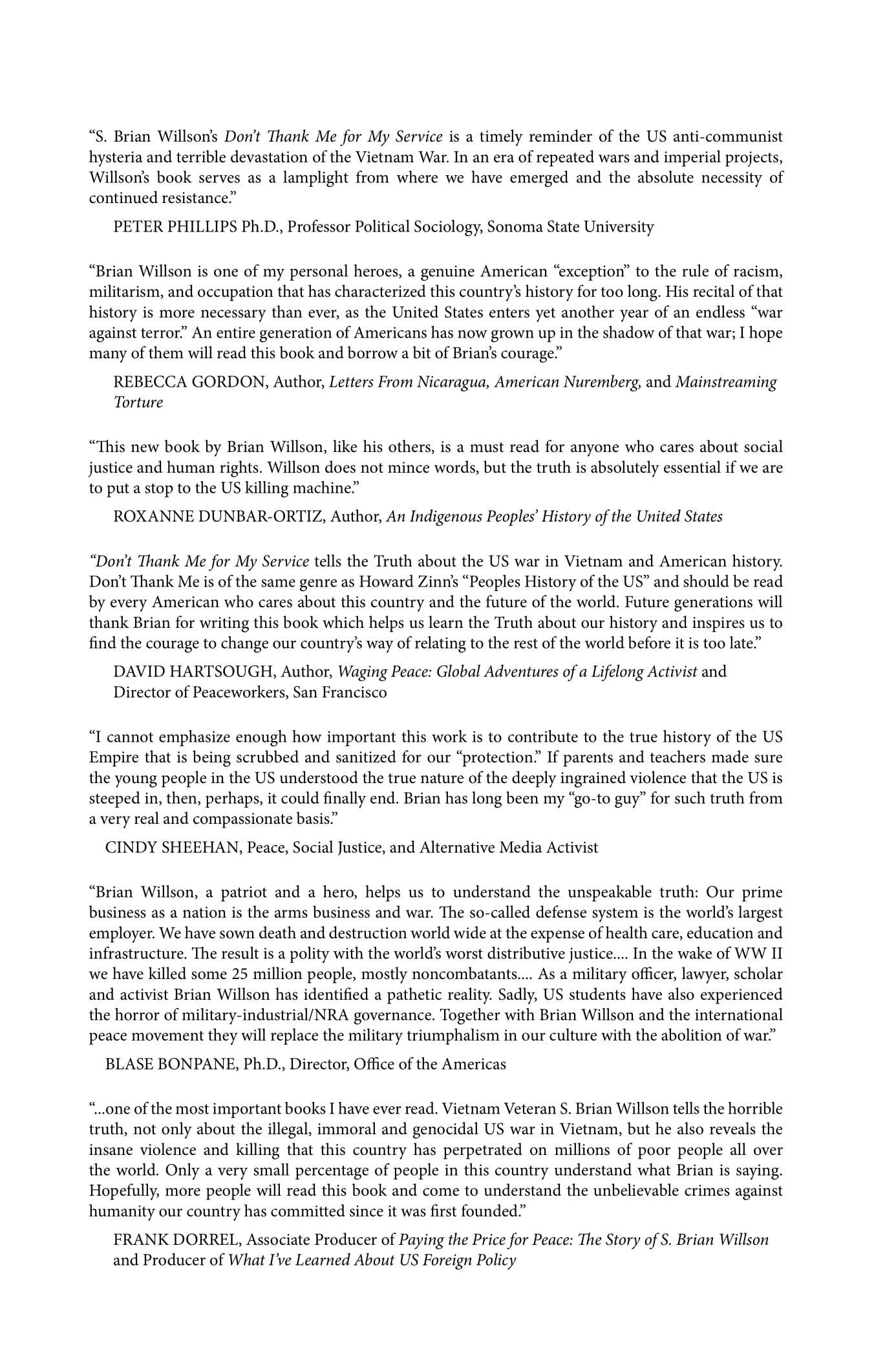 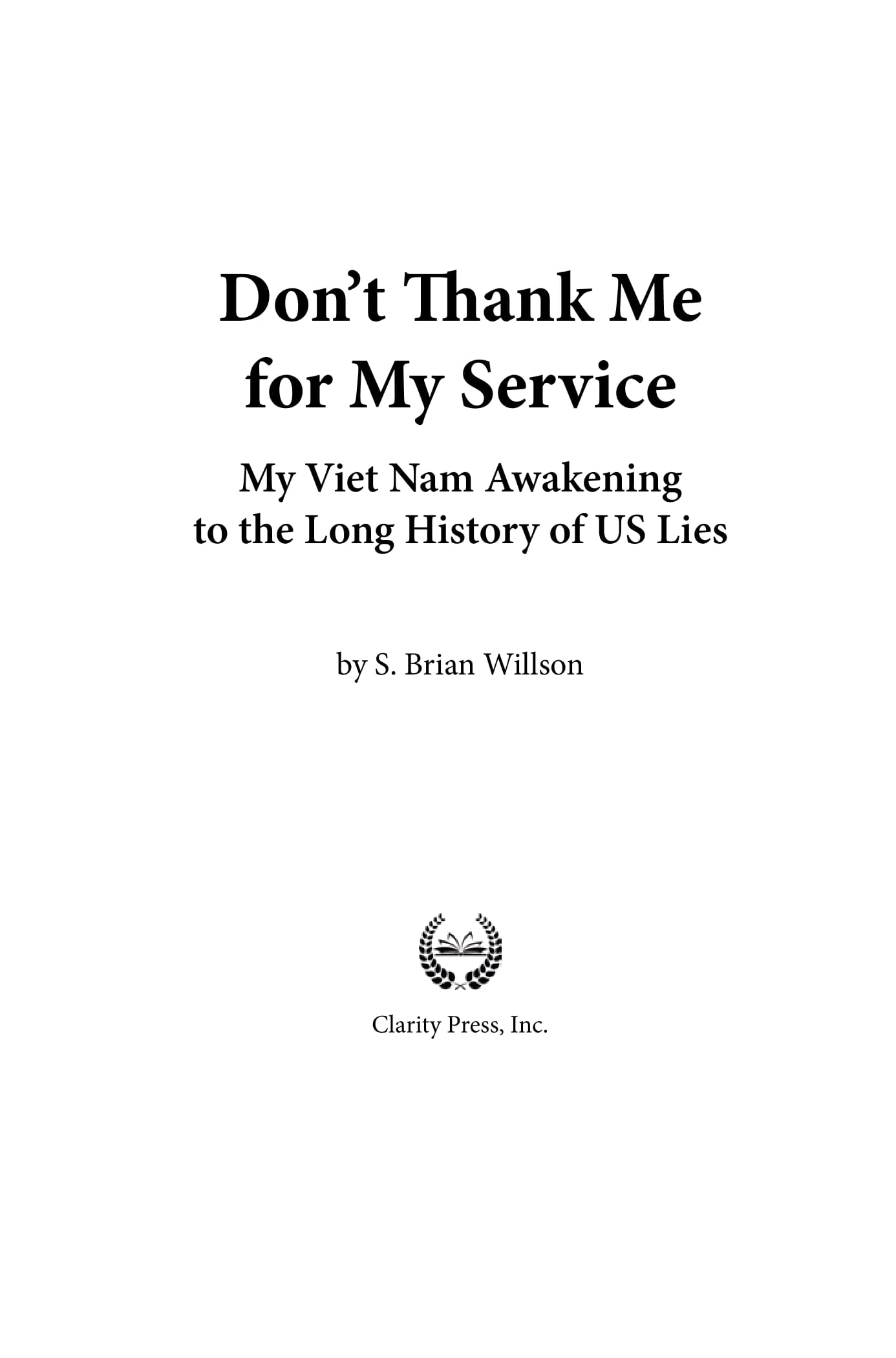 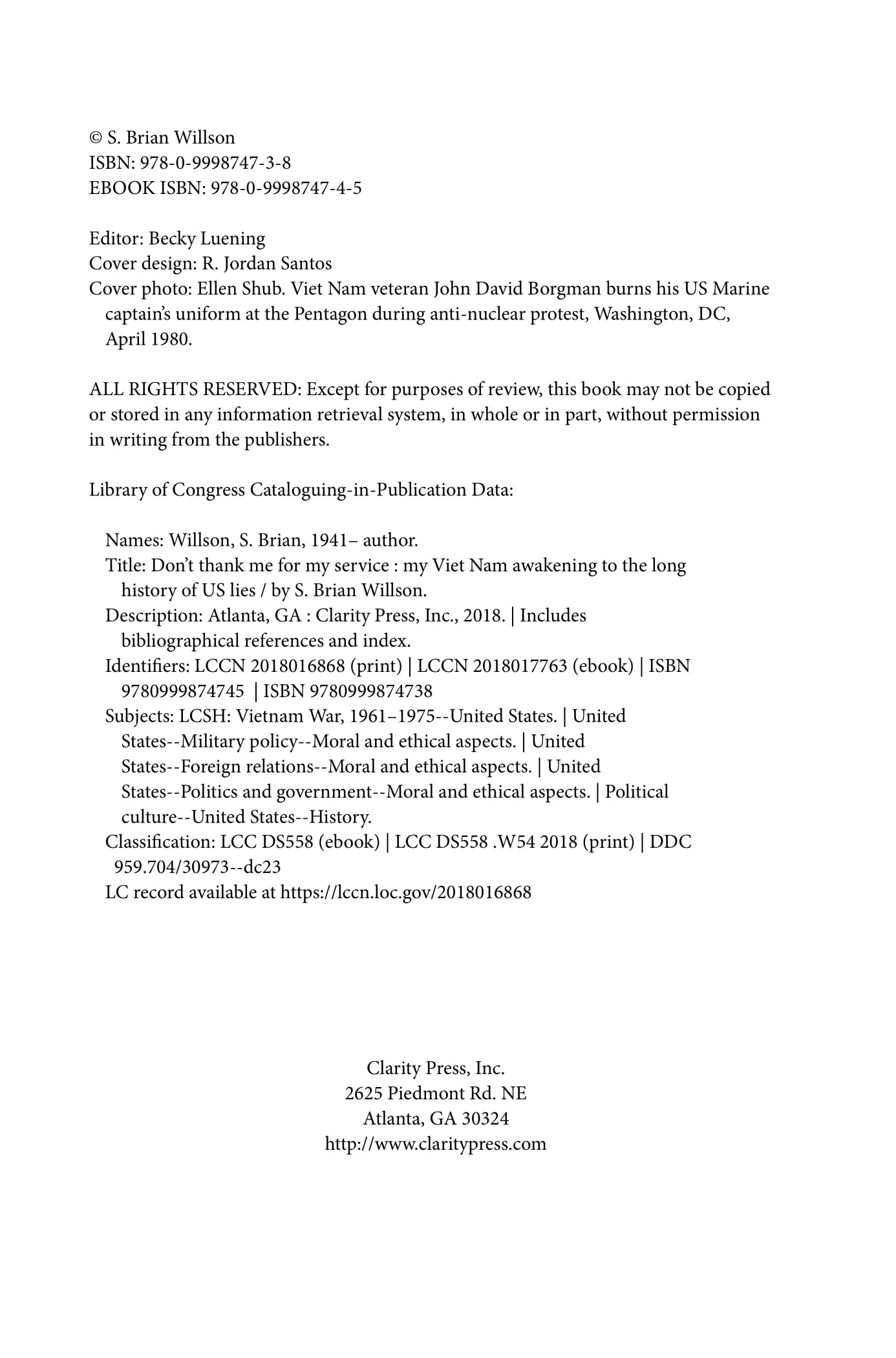 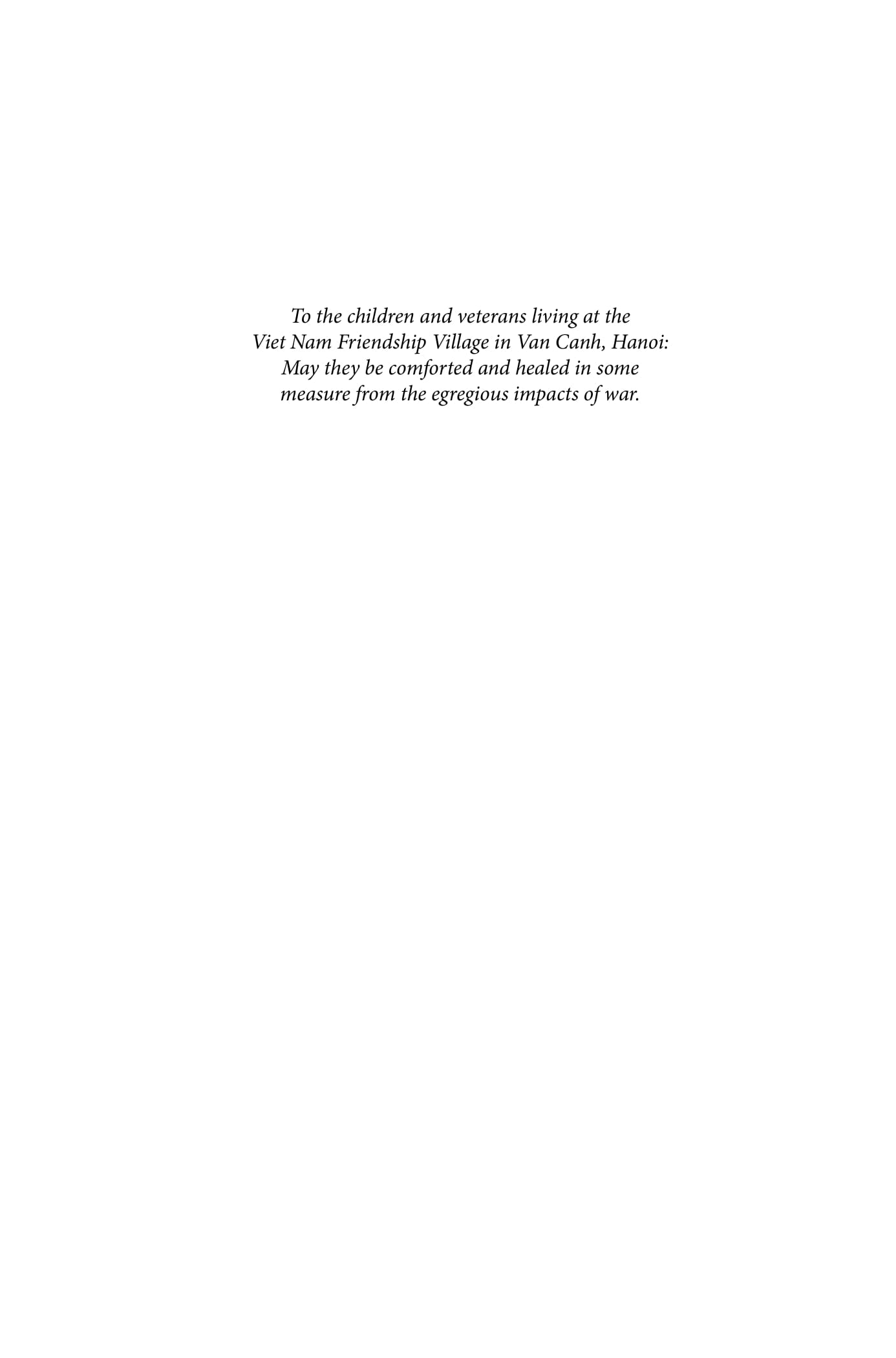 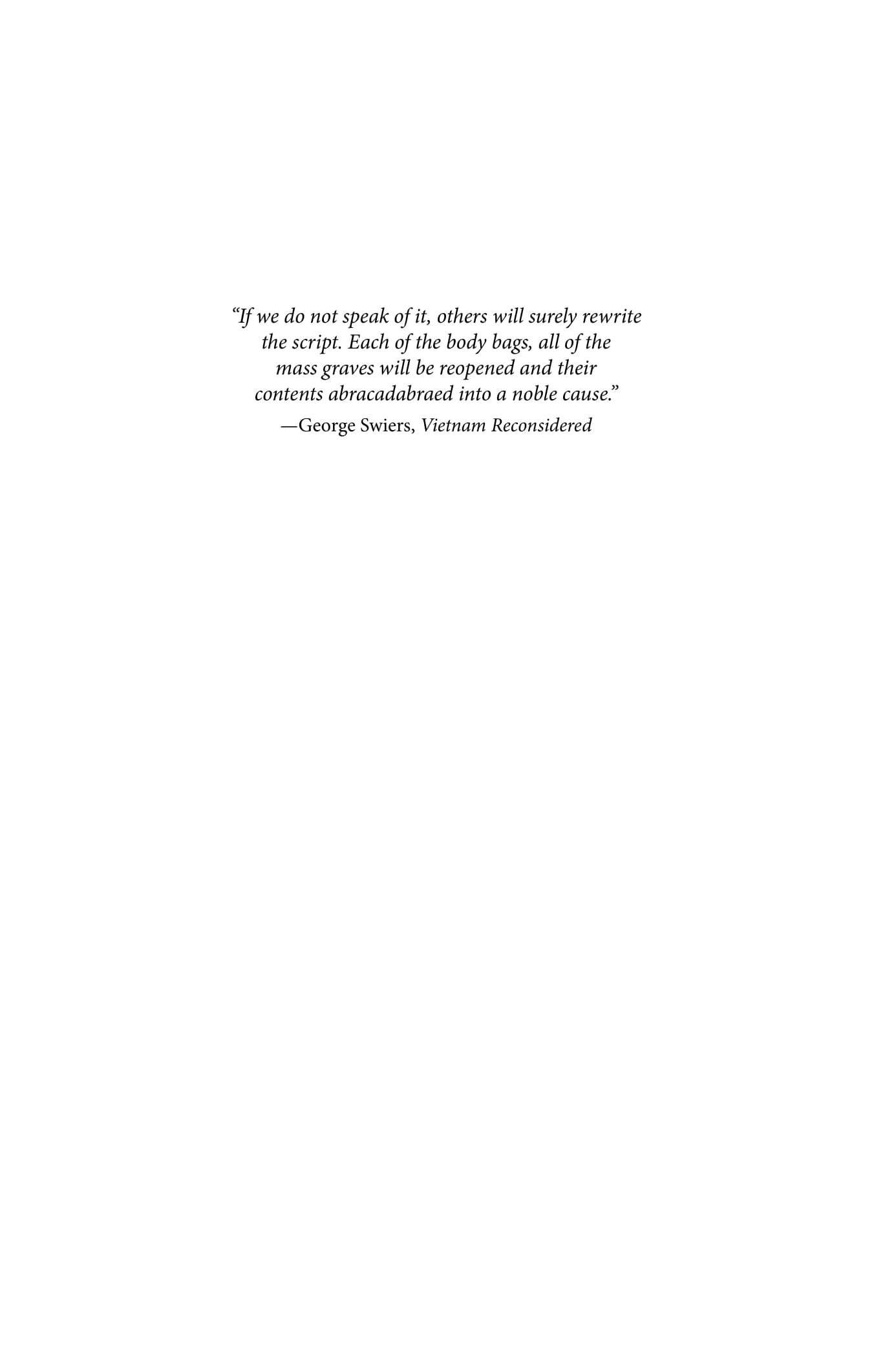 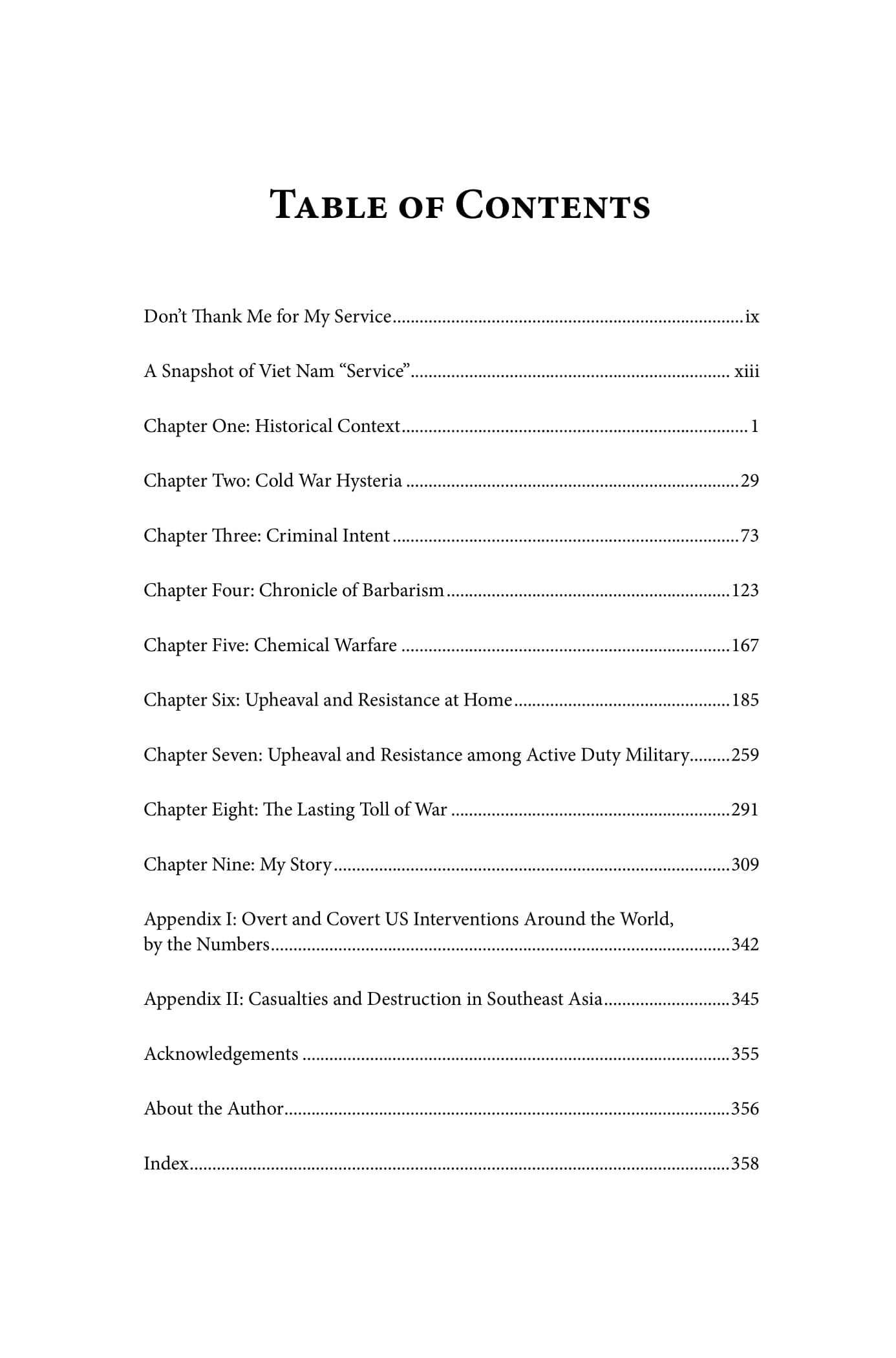 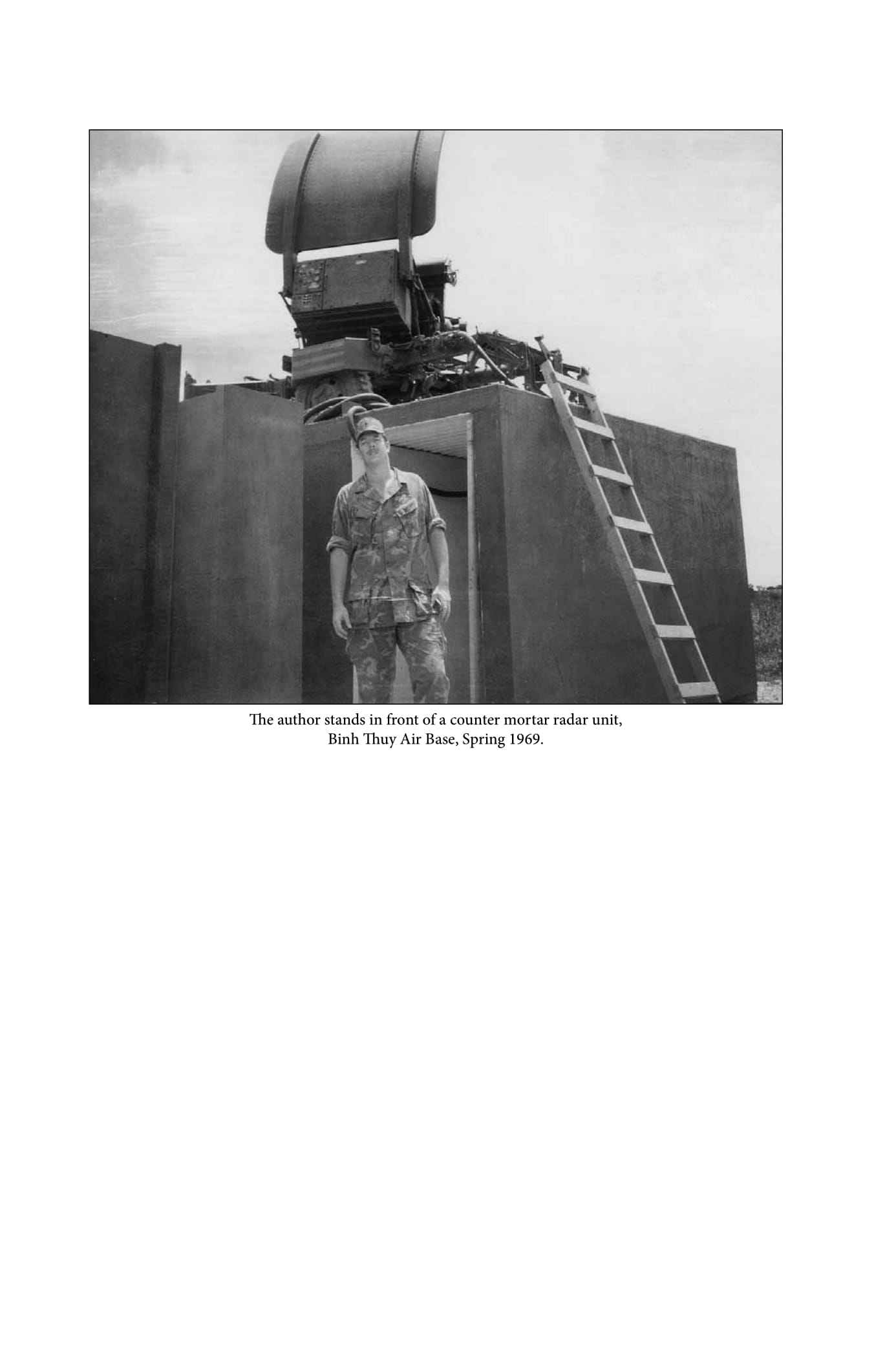 “Brian Willson’s reading of history rings like the peeling of the Liberty Bell.”

“…this is a MUST READ for all of us. The alternative is ever more dangerous perpetual wars.” DANIEL ELLSBERG, The Pentagon Papers and The Doomsday Machine: Confessions of a Nuclear War Planner

“In a time when the daily news keeps track of the vast number of lies our President tweets to his unthinking base, Brian Willson’s reading of history rings like the peeling of the Liberty Bell. I haven’t seen Brian in a long time, but he hasn’t changed. I urge every reader of The Veteran to read this book. Buy two copies, and give one to a teenager near you. I would rate Don’t Thank Me for My Service as highly, highly, highly recommended!” JOHN KETWIG, The Veteran

“By providing the historical context for our involvement in Viet Nam,  Willson pulls back a curtain on U.S. imperialism that cannot easily be closed again.” MARTIN SHEEN

ABOUT THE COVER:  Captain John David Borgman burns his uniform in anguish over his service in Viet Nam, 1980.

BELOW: S. Brian Willson at the Viet Nam War Memorial 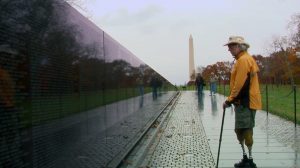 This toxic jolt awakened him to the extent to which he and generations of American citizens had thoughtlessly succumbed to the relentless barrage of lies and propaganda that infest US American culture—from the military and political parties to religious institutions, academic and educational institutions, sports, fraternal and professional associations, the scientific community, the economic system, and all our entertainment—that seek to rationalize its otherwise inexplicable and morally repulsive behavior globally and at home. 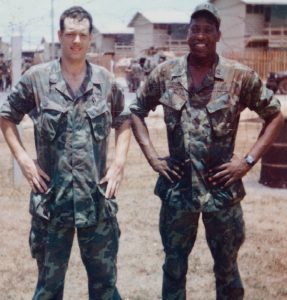 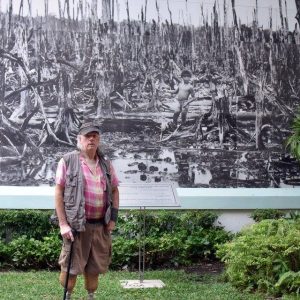 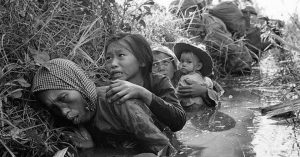 US American history reveals a unifying theme: prosperity for a few through expansion at any cost, to preserve the “exceptional” American Way of Life (AWOL). This has been structurally guided and facilitated by our nation’s founding documents, including the US Constitution. From the beginning, the US was envisaged as a White male supremacist state serving to protect and advance the interests of private and commercial property, and this course has never been reversed, though the 1960s witnessed multiple aligned social movements.

The US-waged war in Viet Nam was not an aberration, but one of hundreds of examples in a long pattern of brutal exploitation. A quick review of the empirical record reveals close to 600 overt military interventions by the US into dozens of countries since 1798, almost 400 since the end of World War II alone, and thousands of covert interventions since 1947. This history overwhelms any rhetoric about the United States as a beacon of freedom and democracy, committed to promoting domestic and global equal justice under law.

These interventions have assured de facto subsidies for US American interests, regulated global markets on our terms, and provided us with access to cheap or free labor and to raw materials. Millions of people around the globe have been murdered with virtual impunity as a result of our interventions in a pattern that illustrates what Noam Chomsky calls the “Fifth Freedom”—the freedom to rob and exploit. This freedom is ultimately protected with use of force when a country or movement seeks to protect or advance the domestic needs and desires of its members or citizens for political freedom or economic well being.

This book provides an invaluable tool for today’s activists, however they may be similarly shocked into wakefulness—whether by war, economic dispossession, or loss of the freedom to dissent.

S. BRIAN WILLSON commanded an AF combat security unit in Viet Nam. He has helped create a host of veterans actions against war, and as a lawyer critiques the US criminal justice system and its foreign policies.
Willson received the Peace Abbey Courage of Conscience Award at the Kennedy Library and Museum in 1992, and in addition to his JD, holds two honorary degrees (LL.D. and Ph.D.).
Author of On Third World Legs and Blood on the Tracks, he is the subject of a 2016 documentary, “Paying the Price For Peace: The Story of S. Brian Willson.”
While peacefully blocking US weapons to Central America, he lost both legs, and now walks (or dances) via prostheses.

16 reviews for DON’T THANK ME FOR MY SERVICE: My Viet Nam Awakening to the Long History of US Lies