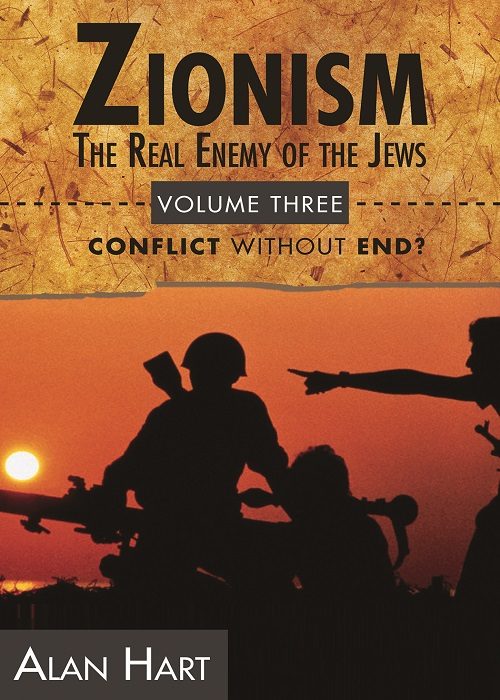 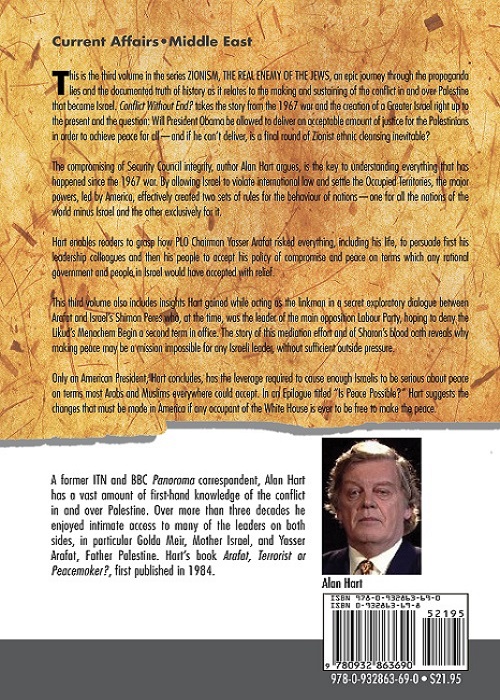 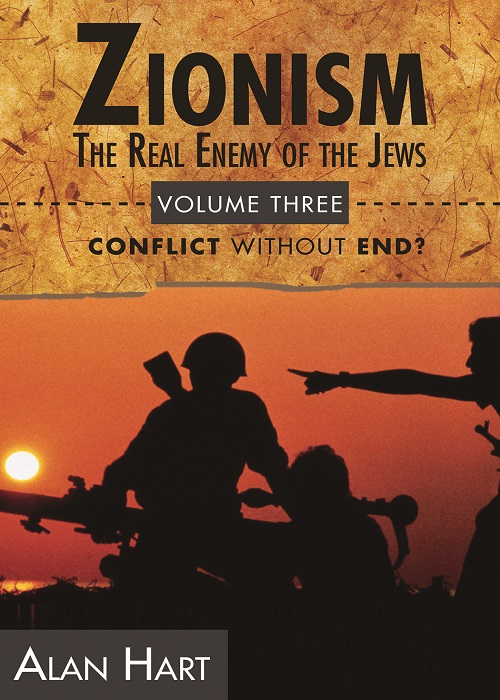 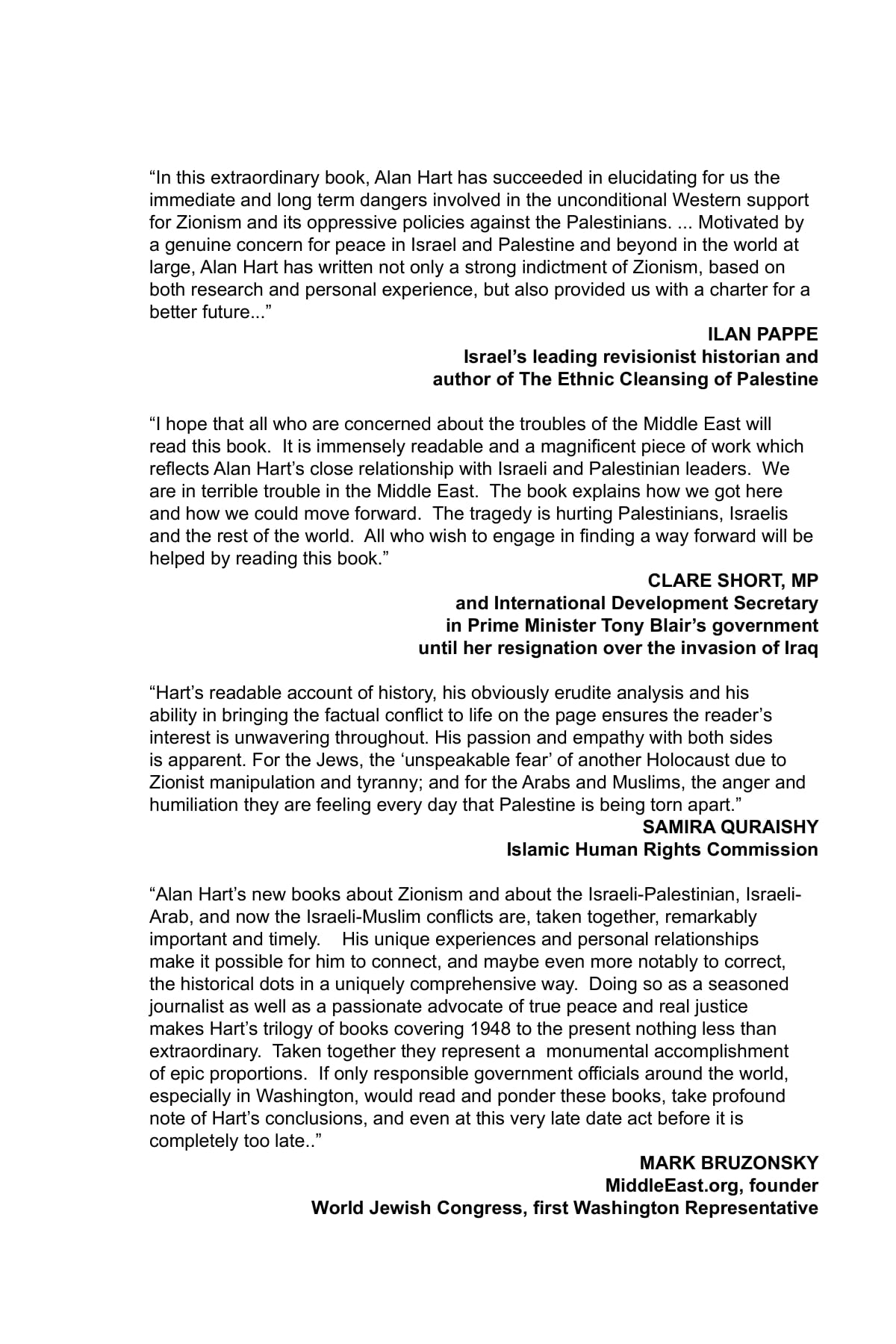 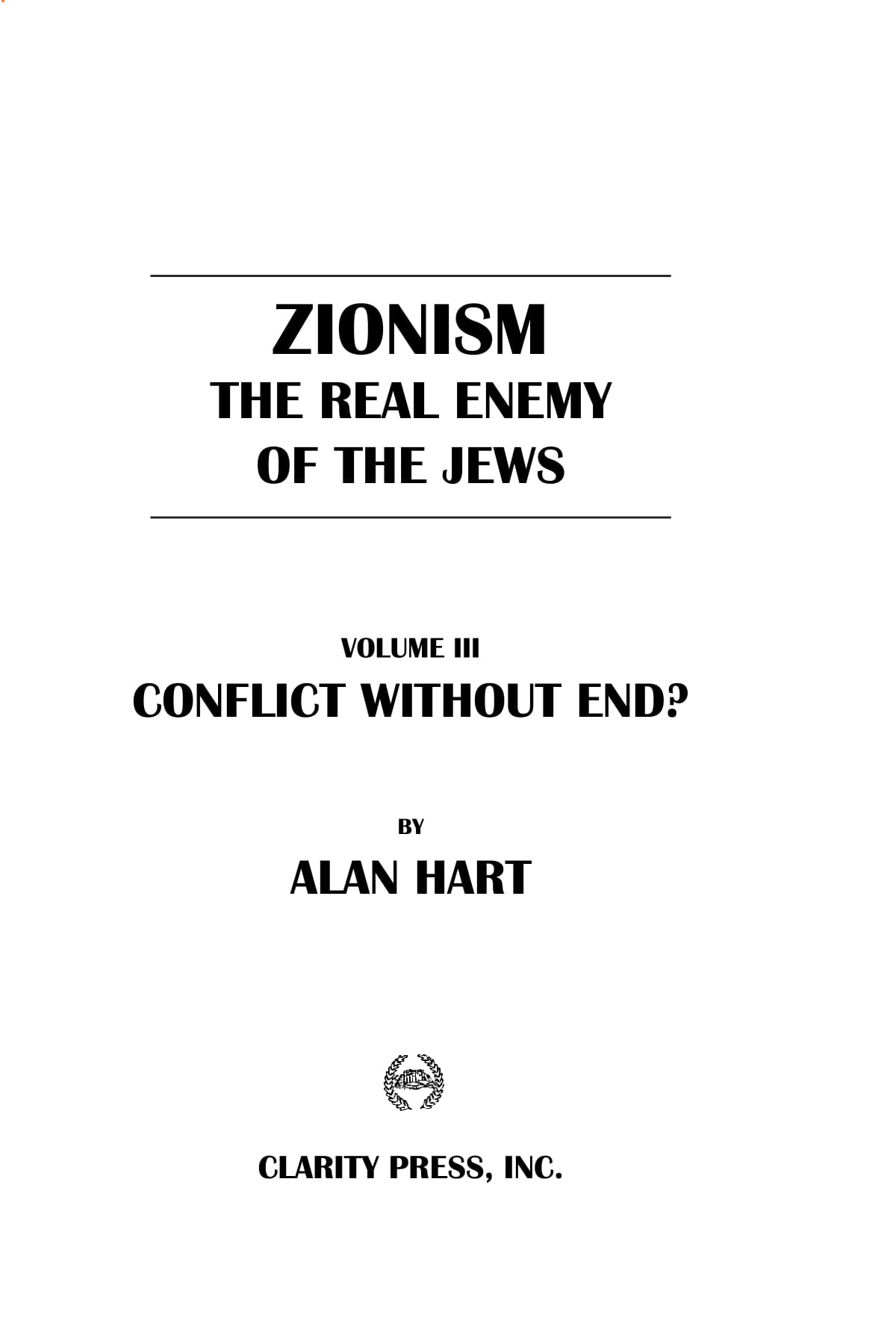 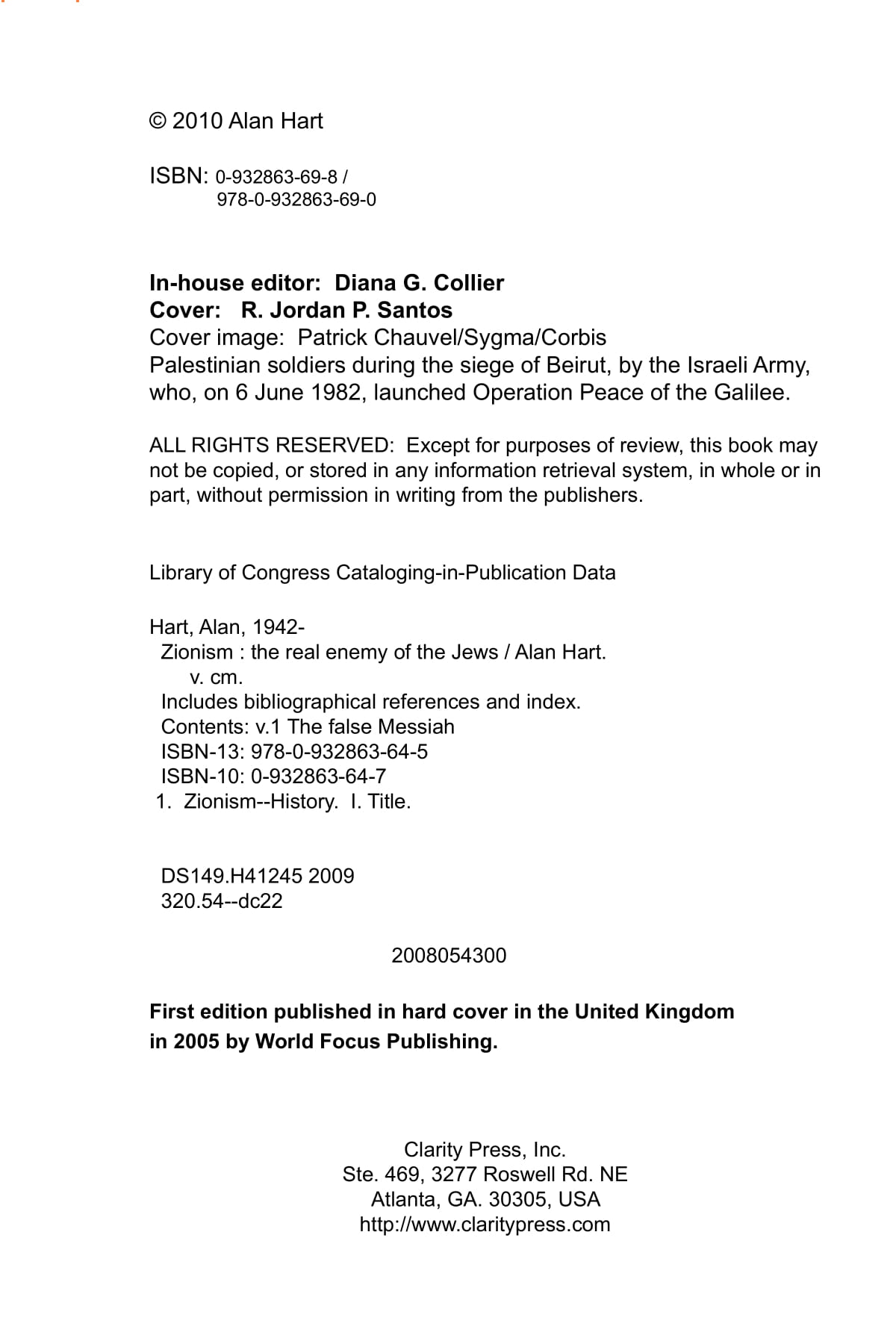 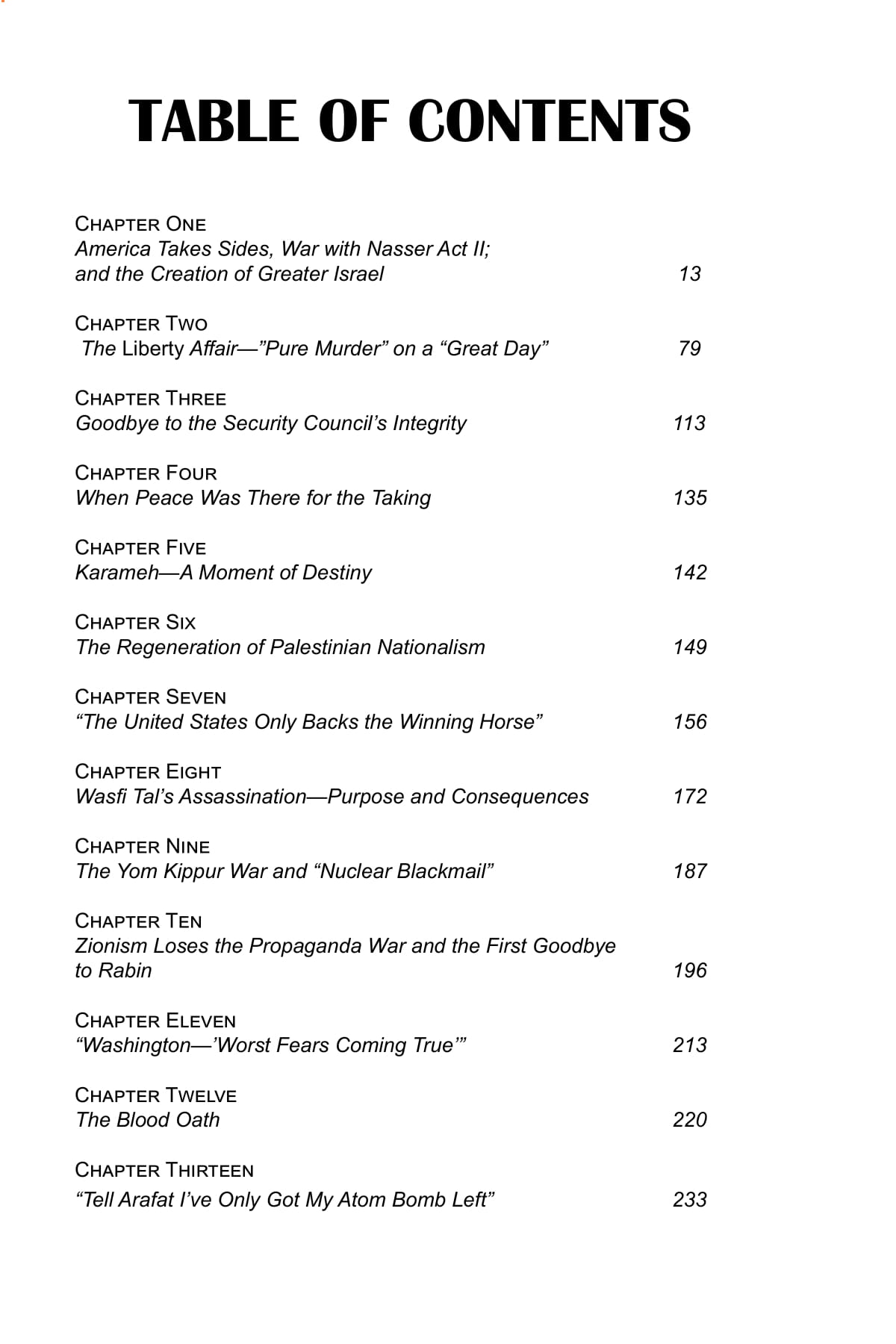 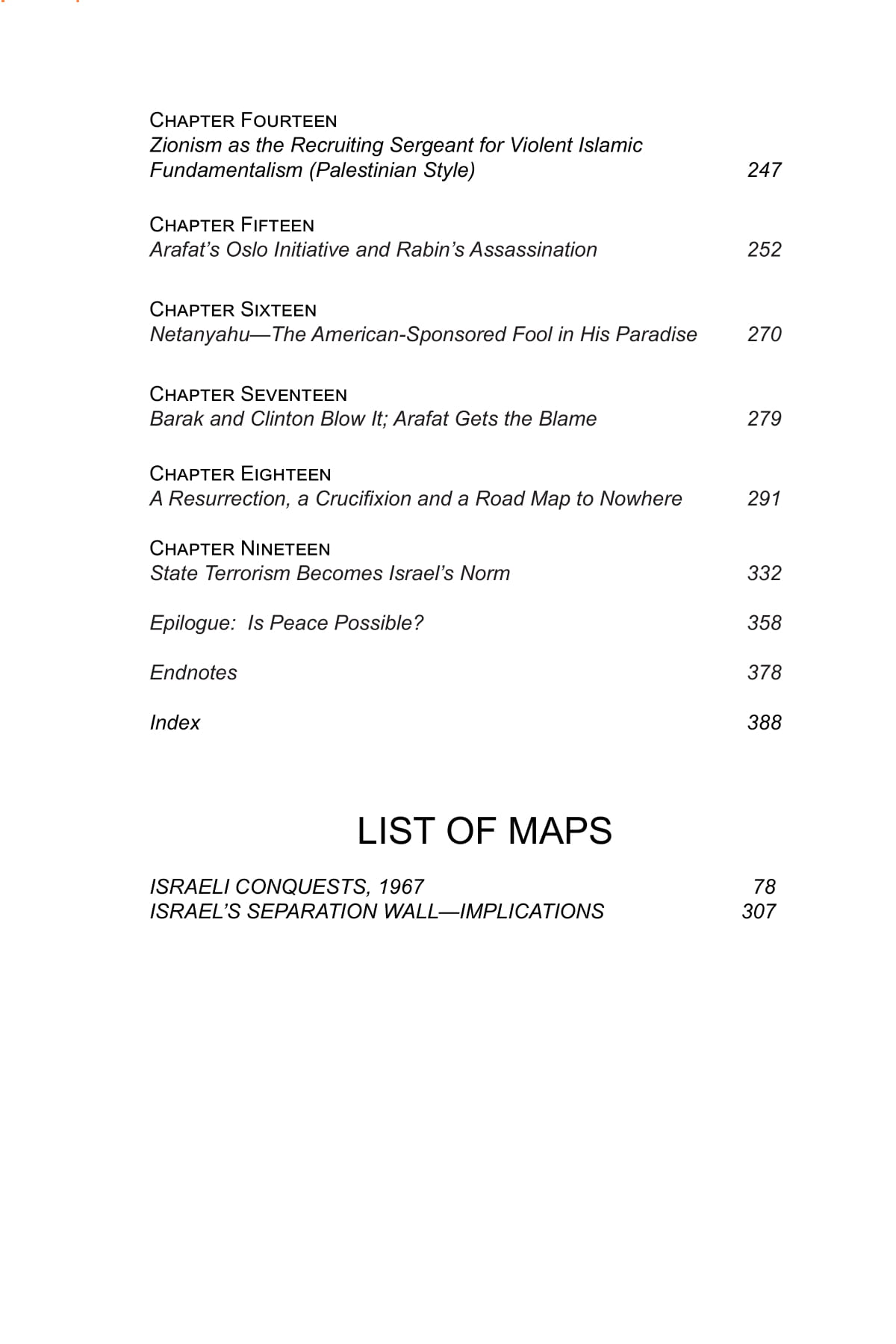 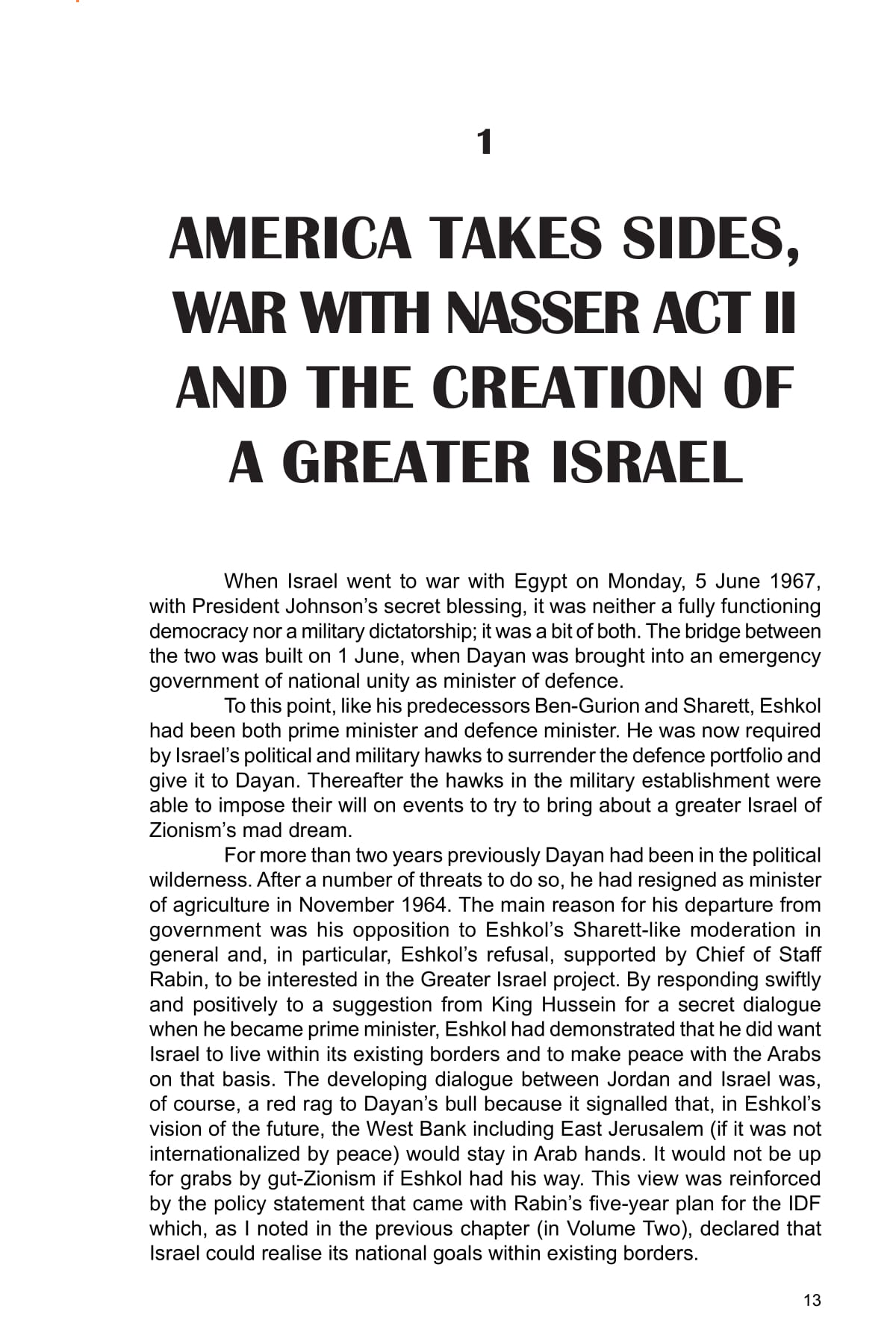 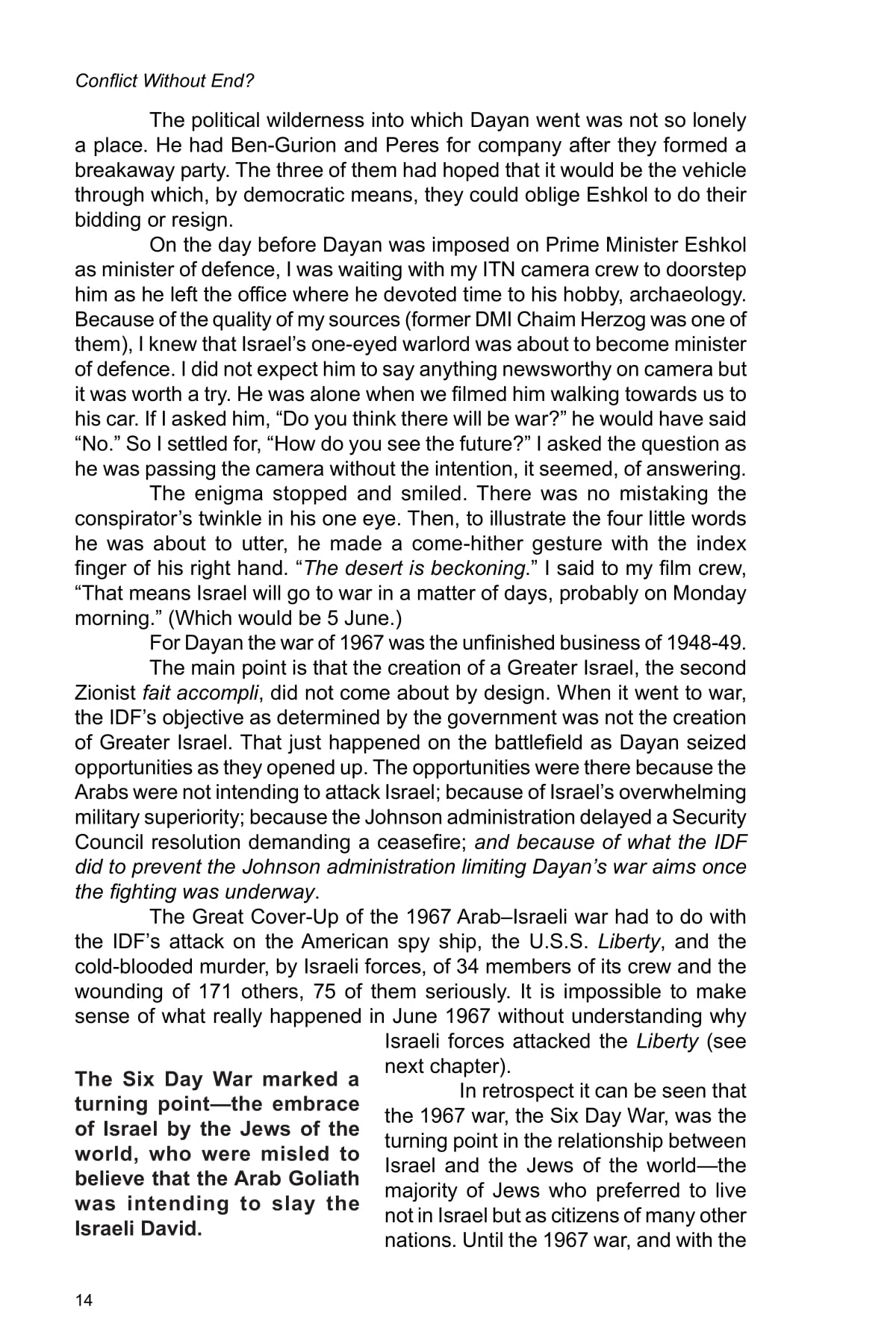 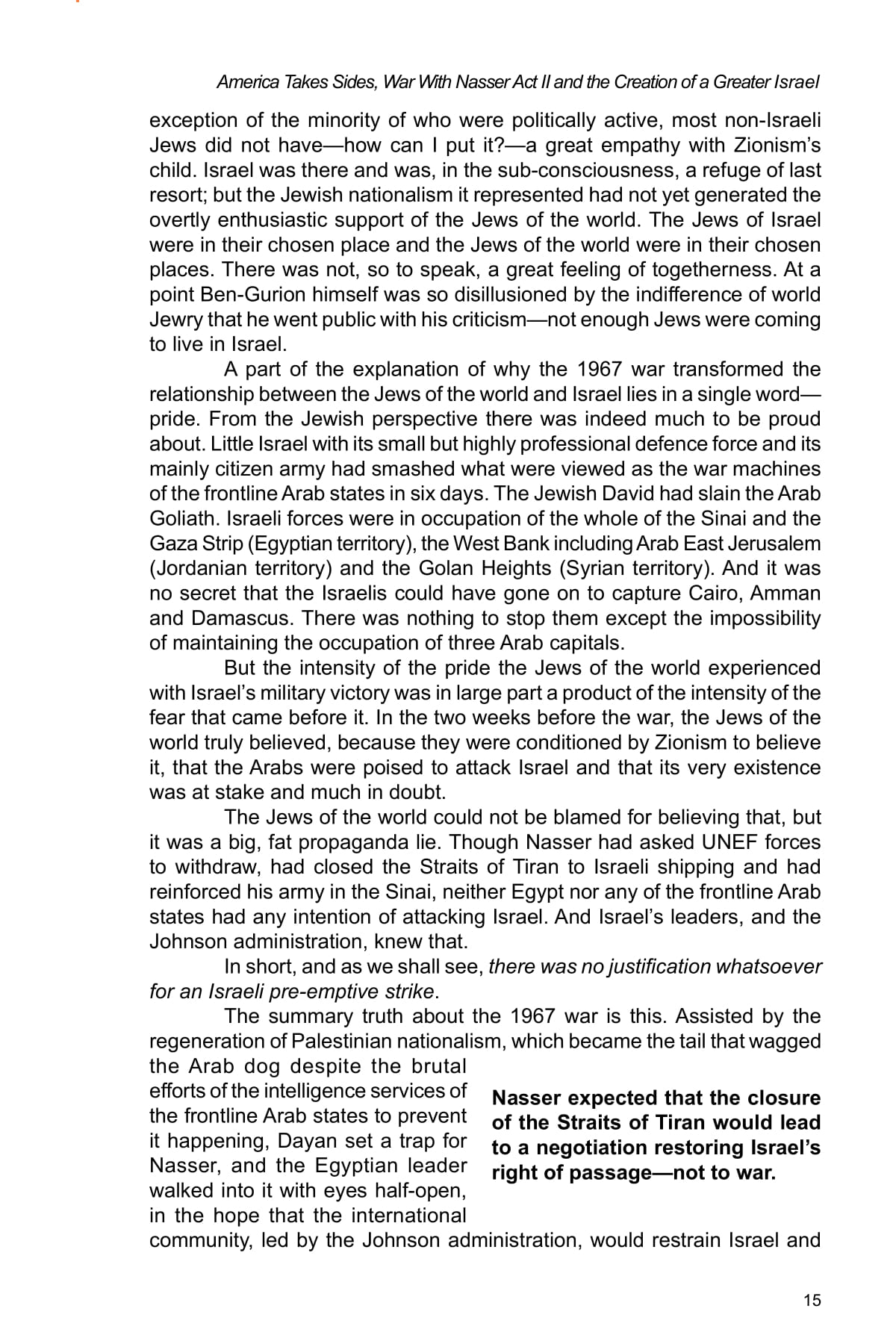 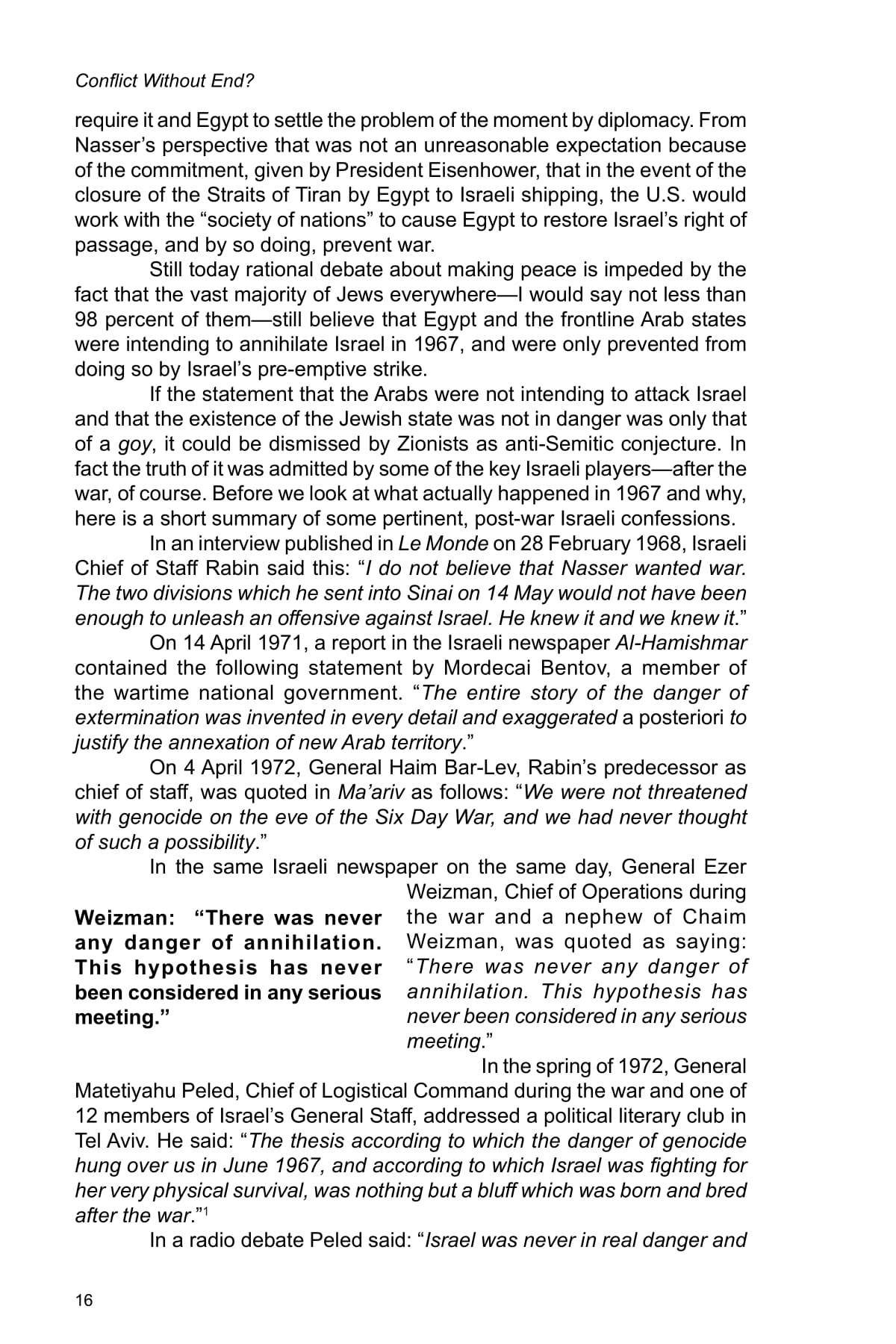 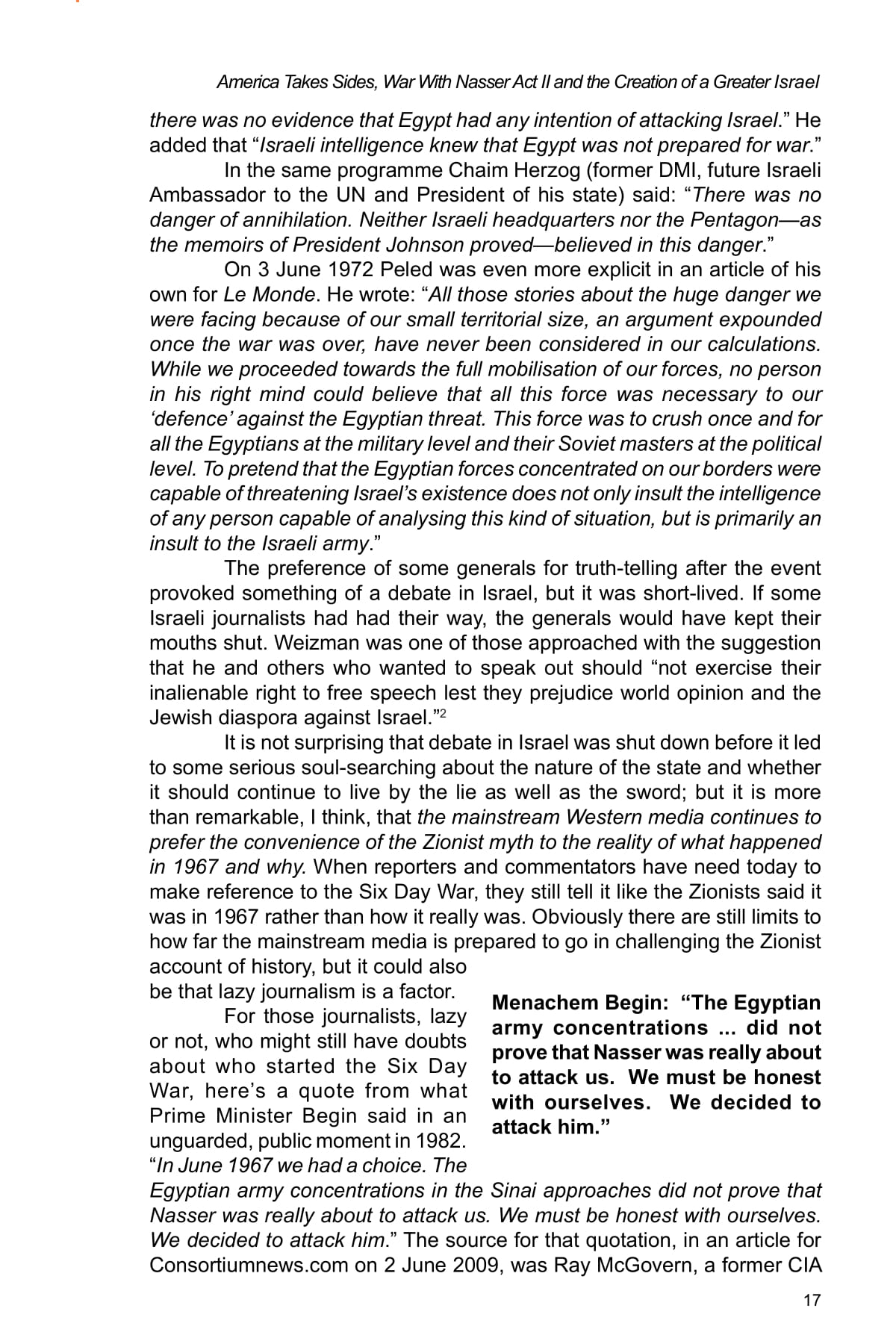 The compromising of Security Council integrity, author Alan Hart argues, is the key to understanding everything that has happened since the 1967 war. By allowing Israel to violate international law and settle the Occupied Territories, the major powers, led by America, effectively created two sets of rules for the behavior of nations—one for all the nations of the world minus Israel and the other exclusively for it. 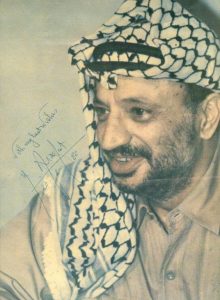 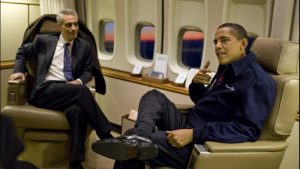 “The scope is immense, but leavened by Hart’s conversational writing style and his years of personal experiences and insider observations. Even the most obsessive readers on this topic will learn much in its pages. At a book promotion gathering in a home in Brooklyn in June, Hart said he wrote with two goals in mind: to contribute to justice for the Palestinians and to stop anti-Semitism. Hart is in earnest about the latter…”
JANE ADAS, Americans for Middle East Understanding, Sept-October, 2010

“These three wide-ranging, highly readable,and extremely well-informed volumes are a real gem that should be read by every politically- and historically minded seeker of truth, justice, and enduring peace in historical Palestine.”
Journal of Palestine Studies, 2012

This is the third volume in the series ZIONISM, THE REAL ENEMY OF THE JEWS, an epic journey through the propaganda lies and the documented truth of history as it relates to the making and sustaining of the conflict in and over Palestine that became Israel. Conflict Without End? takes the story from the 1967 war and the creation of a Greater Israel right up to the present and the question: Will President Obama be allowed to deliver an acceptable amount of justice for the Palestinians in order to achieve peace for all—and if he can’t deliver, is a final round of Zionist ethnic cleansing inevitable?

The compromising of Security Council integrity, author Alan Hart argues, is the key to understanding everything that has happened since the 1967 war. By allowing Israel to violate international law and settle the Occupied Territories, the major powers, led by America, effectively created two sets of rules for the behaviour of nations—one for all the nations of the world minus Israel and the other exclusively for it.

Hart enables readers to grasp how PLO Chairman Yasser Arafat risked everything, including his life, to persuade first his leadership colleagues and then his people to accept his policy of compromise and peace on terms which any rational government and people in Israel would have accepted with relief.

This third volume also includes insights Hart gained while acting as the linkman in a secret exploratory dialogue between Arafat and Israel’s Shimon Peres who, at the time, was the leader of the main opposition Labour Party, hoping to deny the Likud’s Menachem Begin a second term in office. The story of this mediation effort and of Sharon’s blood oath reveals why making peace may be a mission impossible for any Israeli leader, without sufficient outside pressure.

Only an American President, Hart concludes, has the leverage required to cause enough Israelis to be serious about peace on terms most Arabs and Muslims everywhere could accept. In an Epilogue titled “Is Peace Possible?” Hart suggests the changes that must be made in America if any occupant of the White House is ever to be free to make the peace.

Alan Hart (deceased 2017) was a former ITN and BBC Panorama foreign correspondent with a vast first-hand knowledge of the conflict in and over Palestine that became Israel. His first book Arafat, Terrorist or Peacemaker? was published by Sidgwick & Jackson in 1984 and subsequently in several updated editions over a decade, in America by Indiana University Press as ARAFAT. In the early 1970s, his independent production company produced the first ever and to date only documentary on the true dimensions of global poverty and its implications for all. The film, Five Minutes To Midnight, had its world premiere at the opening of the 7th Special Session of the UN General Assembly (called to discuss the need for a New World Economic Order), was shown on television in many Western countries, was versioned for schools and became a standard work of reference. For that effort Alan was credited with having played a leading role in getting the North-South issue on to the agenda for political and public debate.

1 review for ZIONISM, THE REAL ENEMY OF THE JEWS / Volume III Conflict Without End?