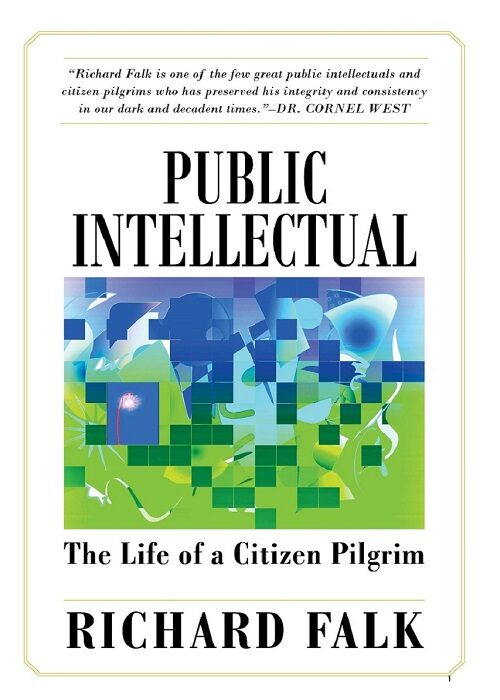 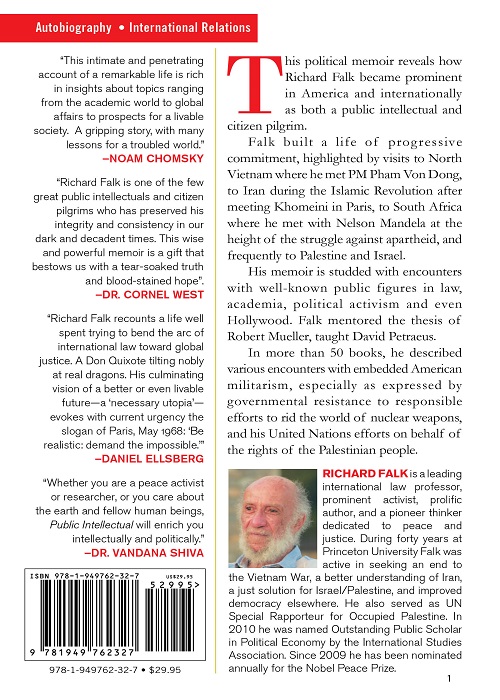 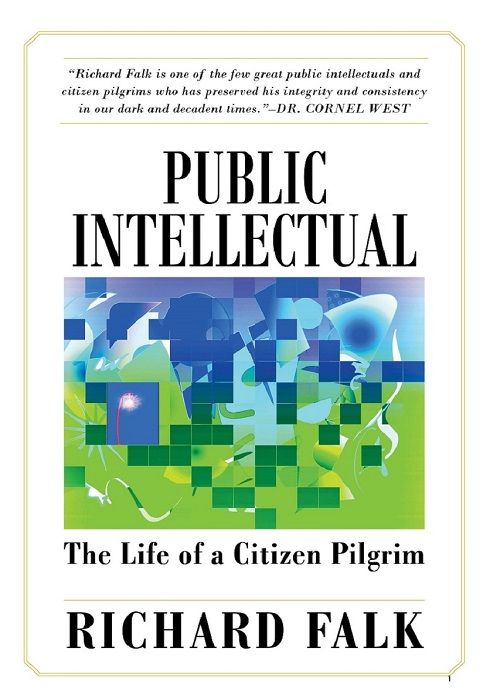 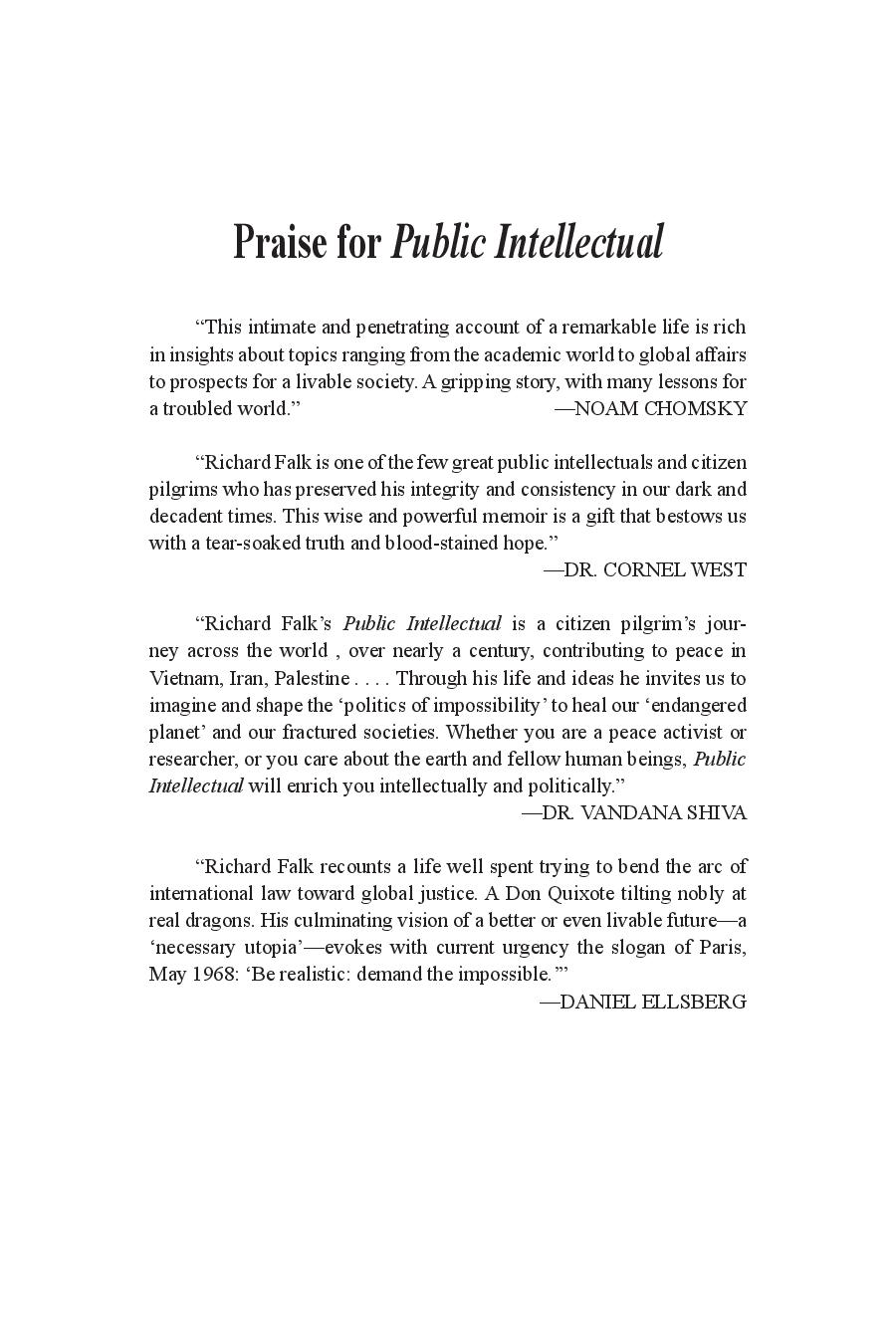 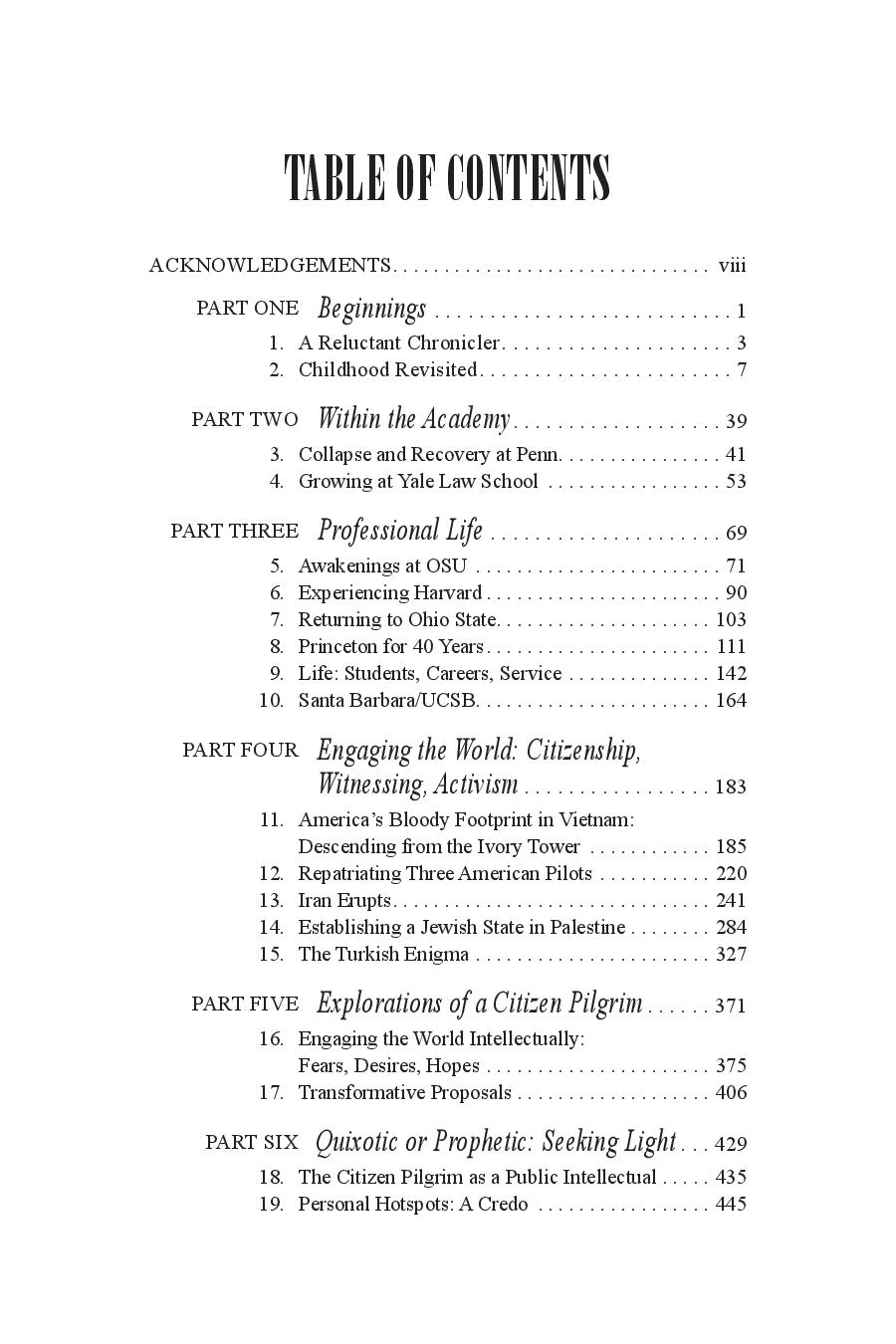 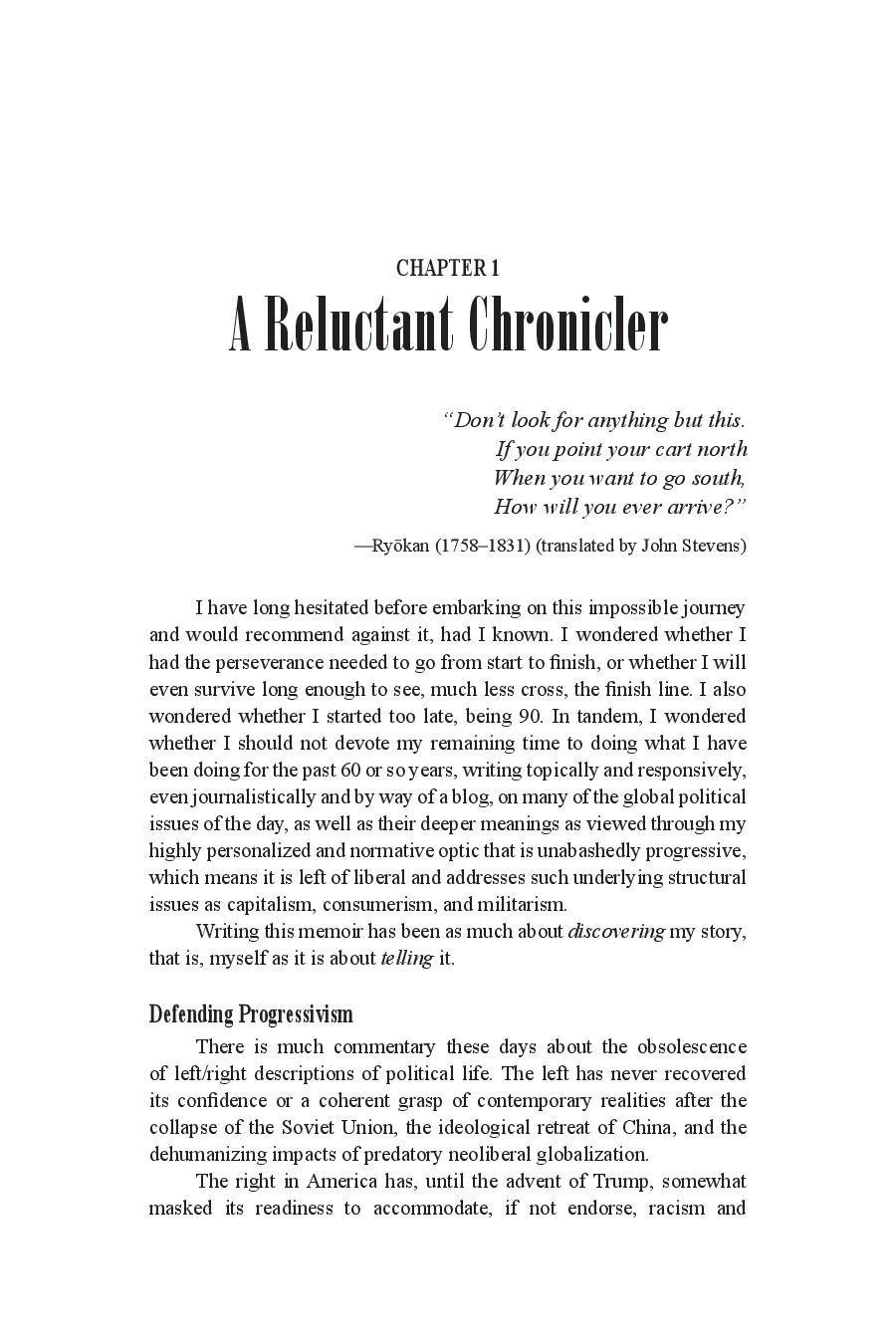 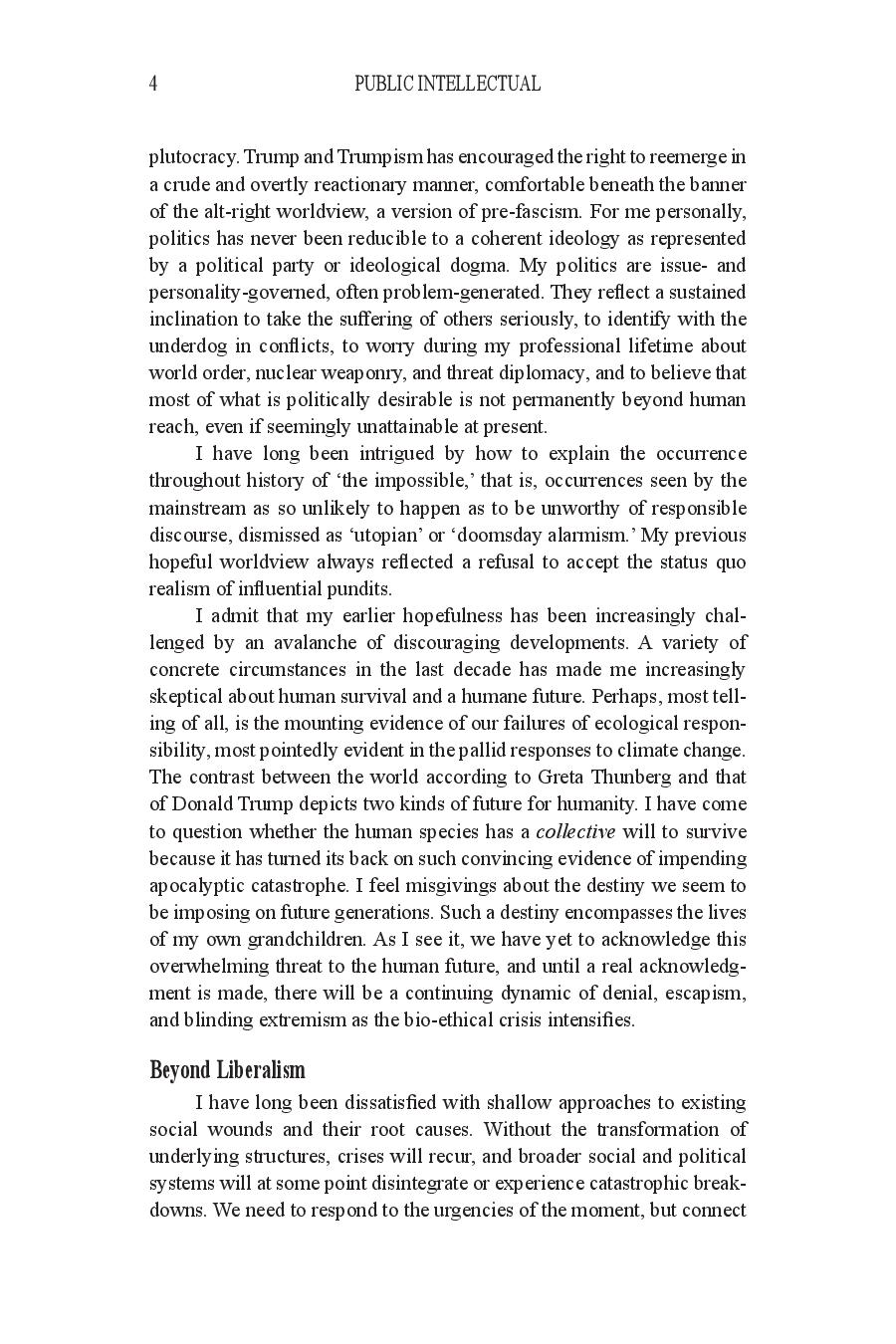 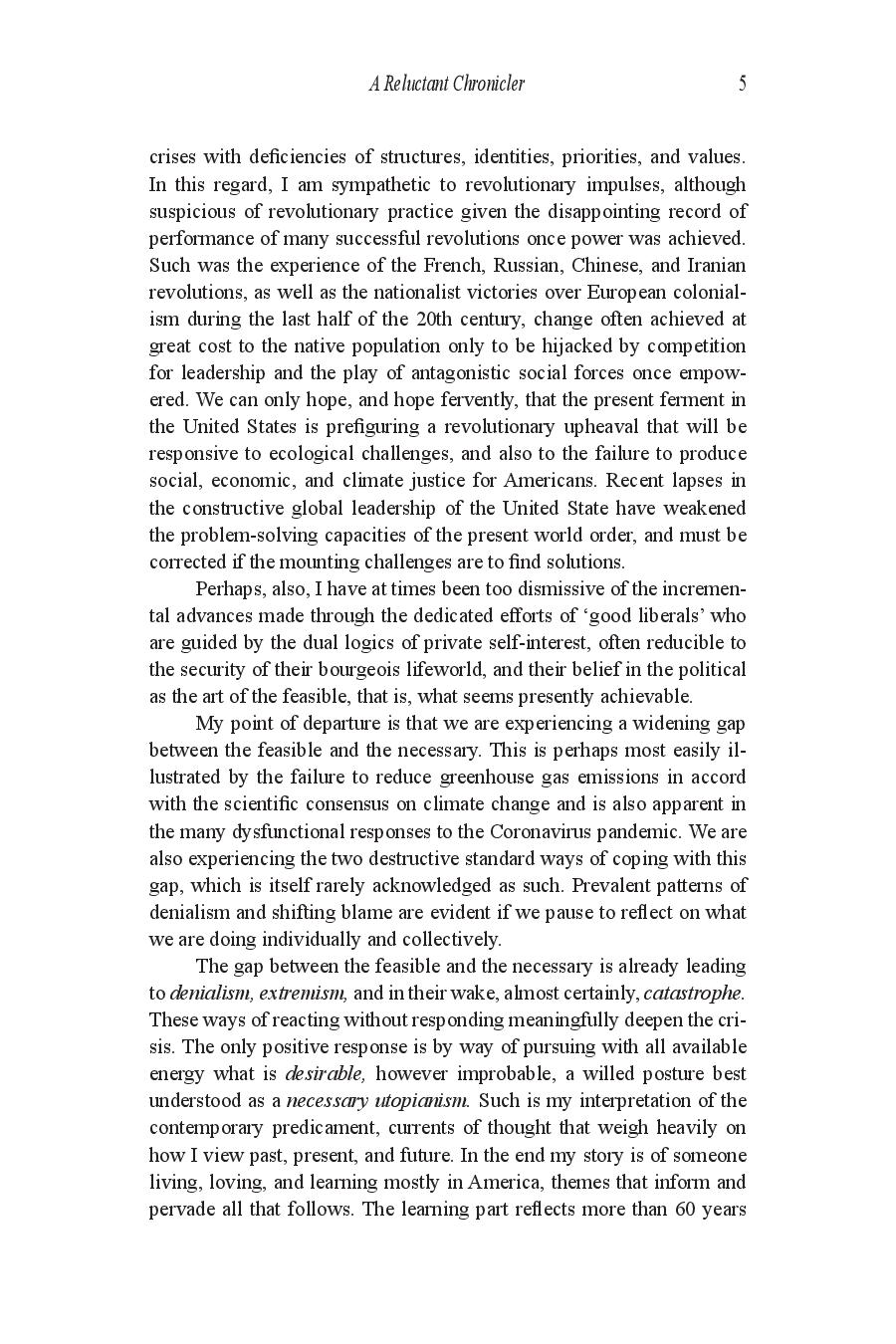 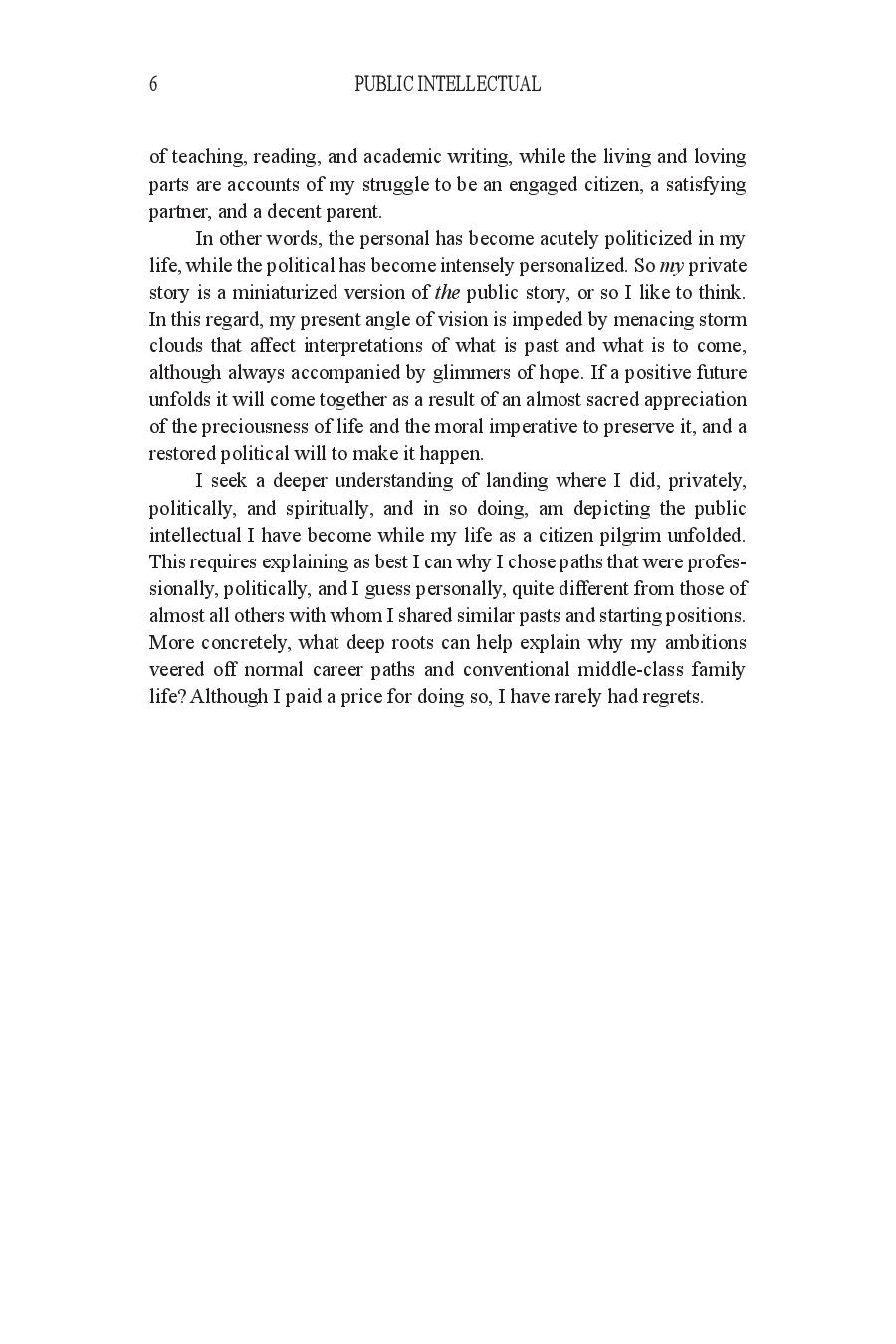 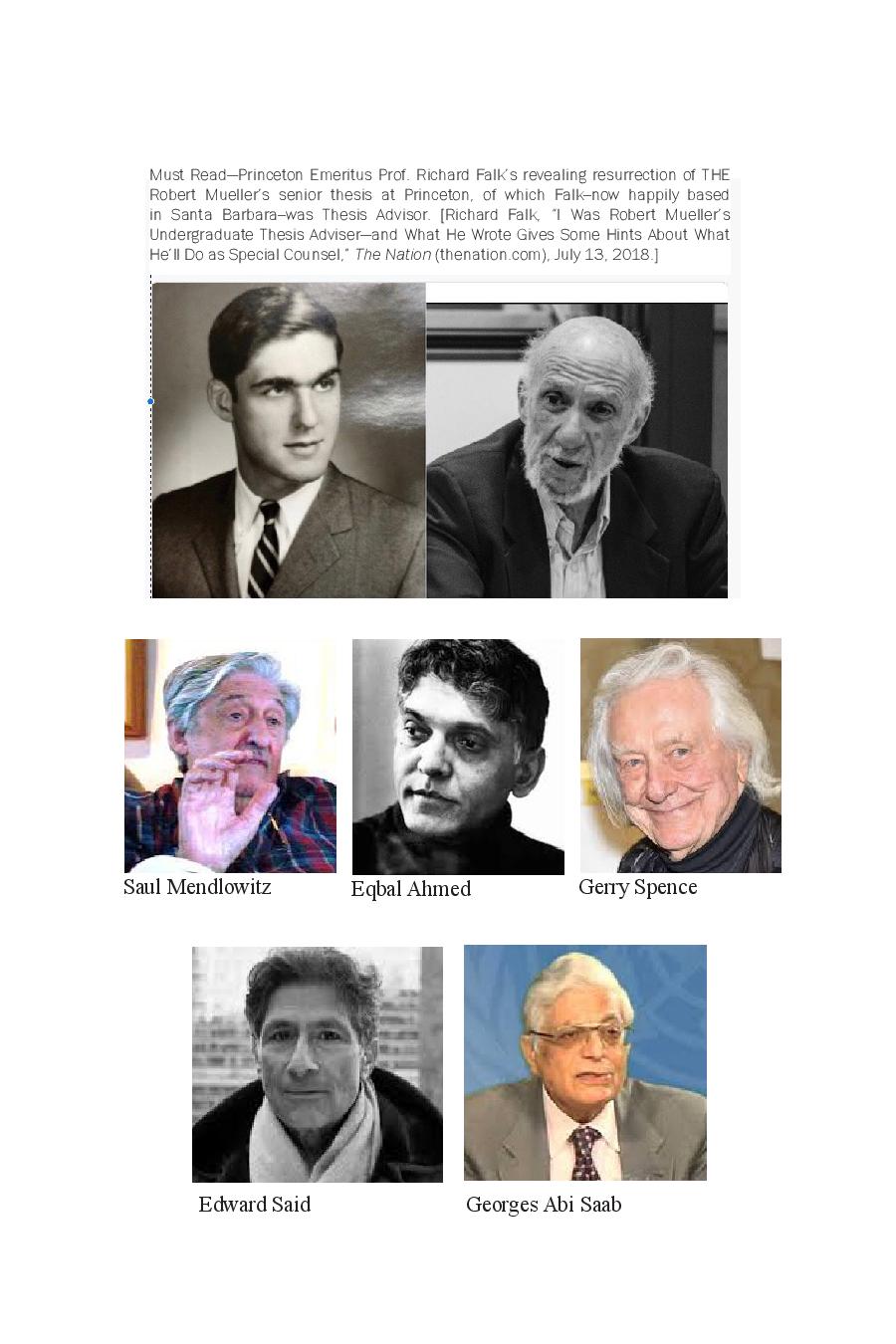 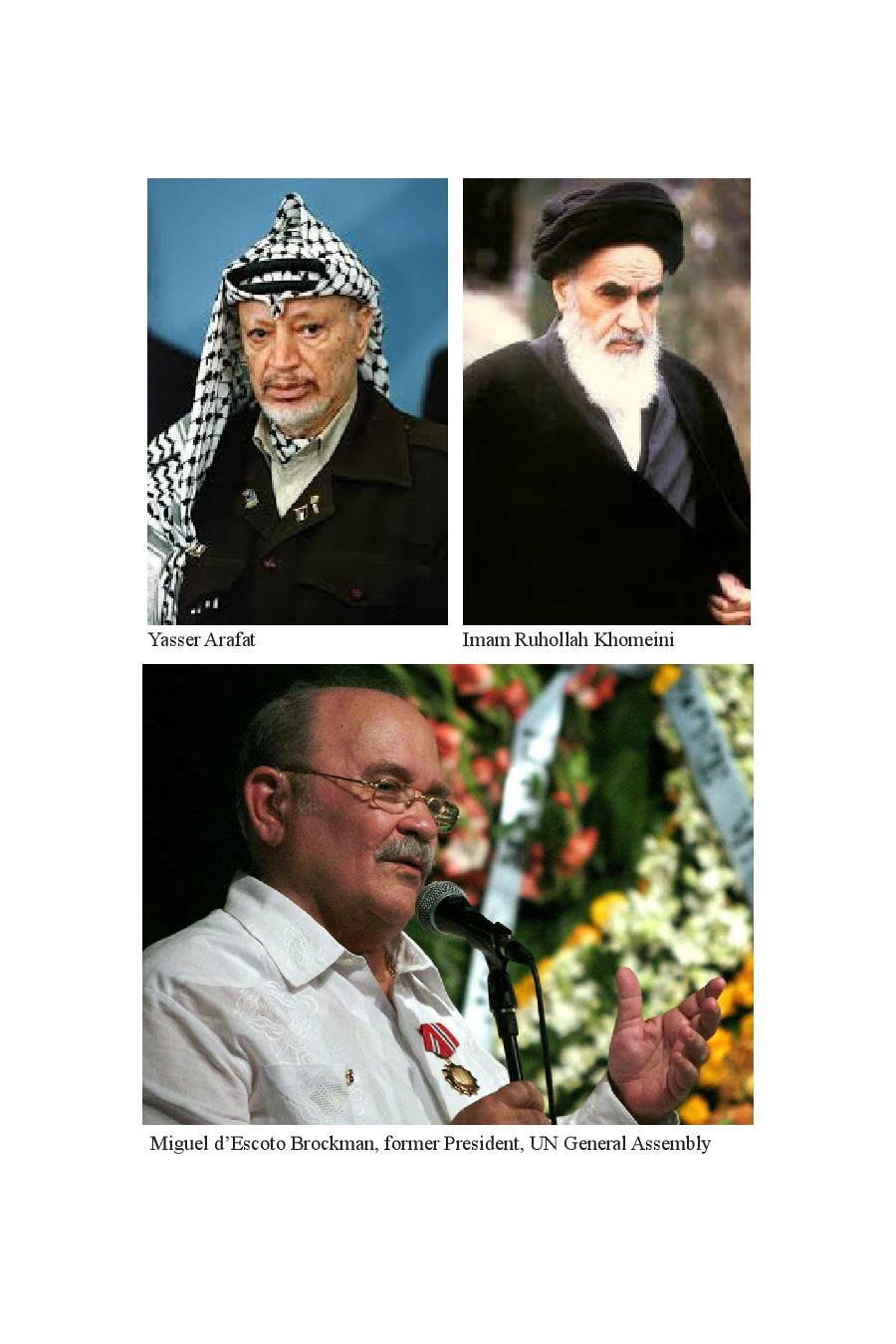 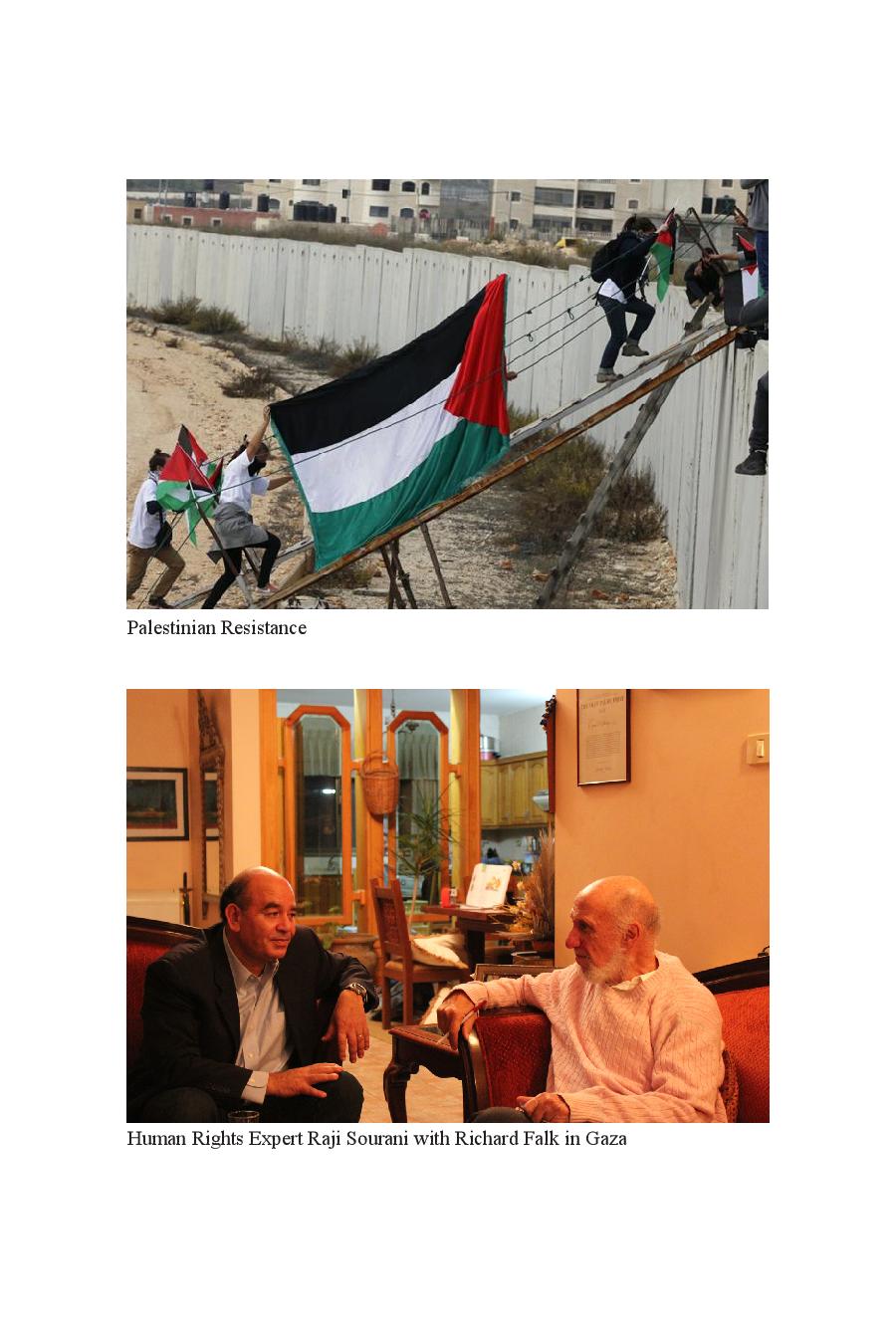 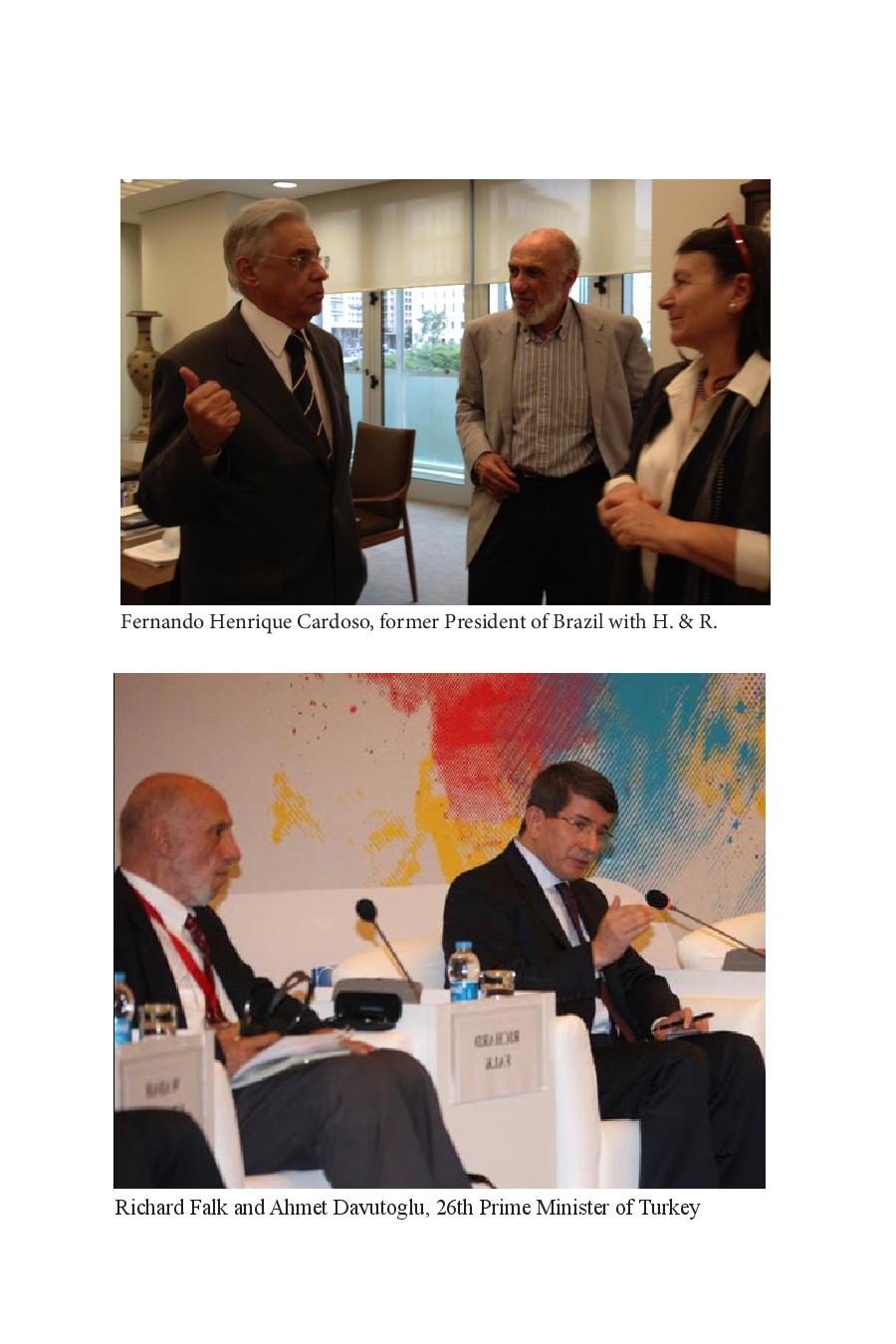 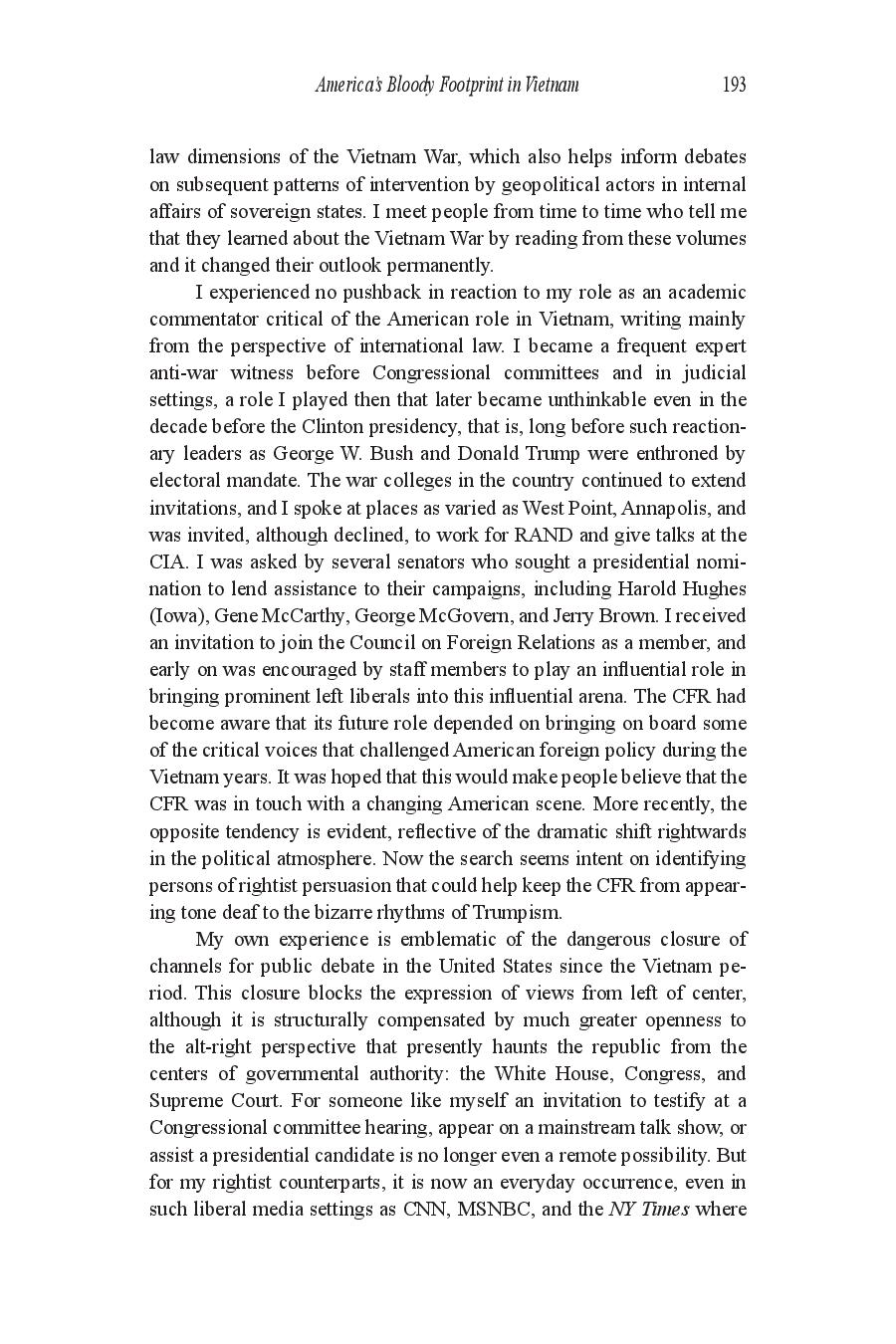 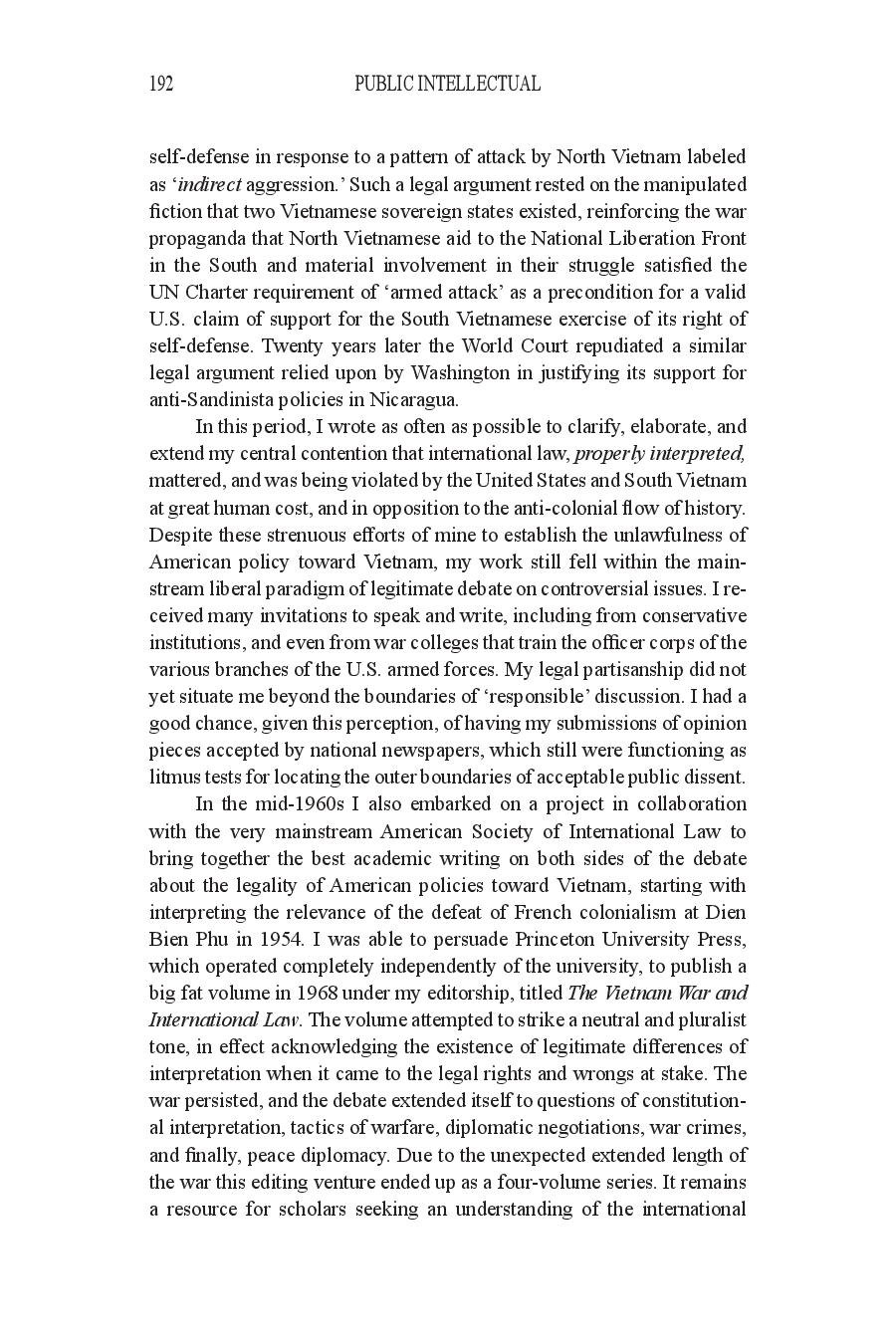 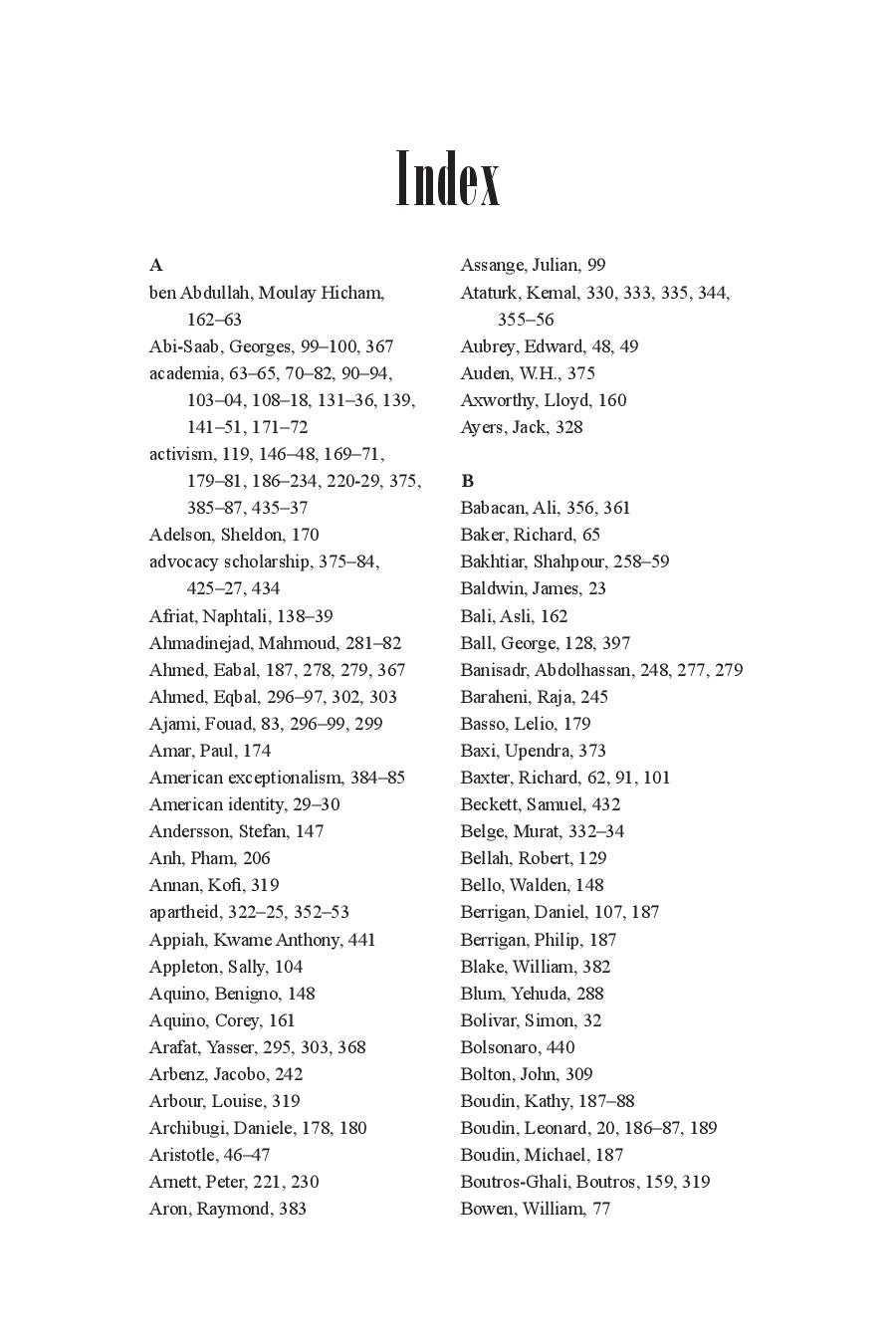 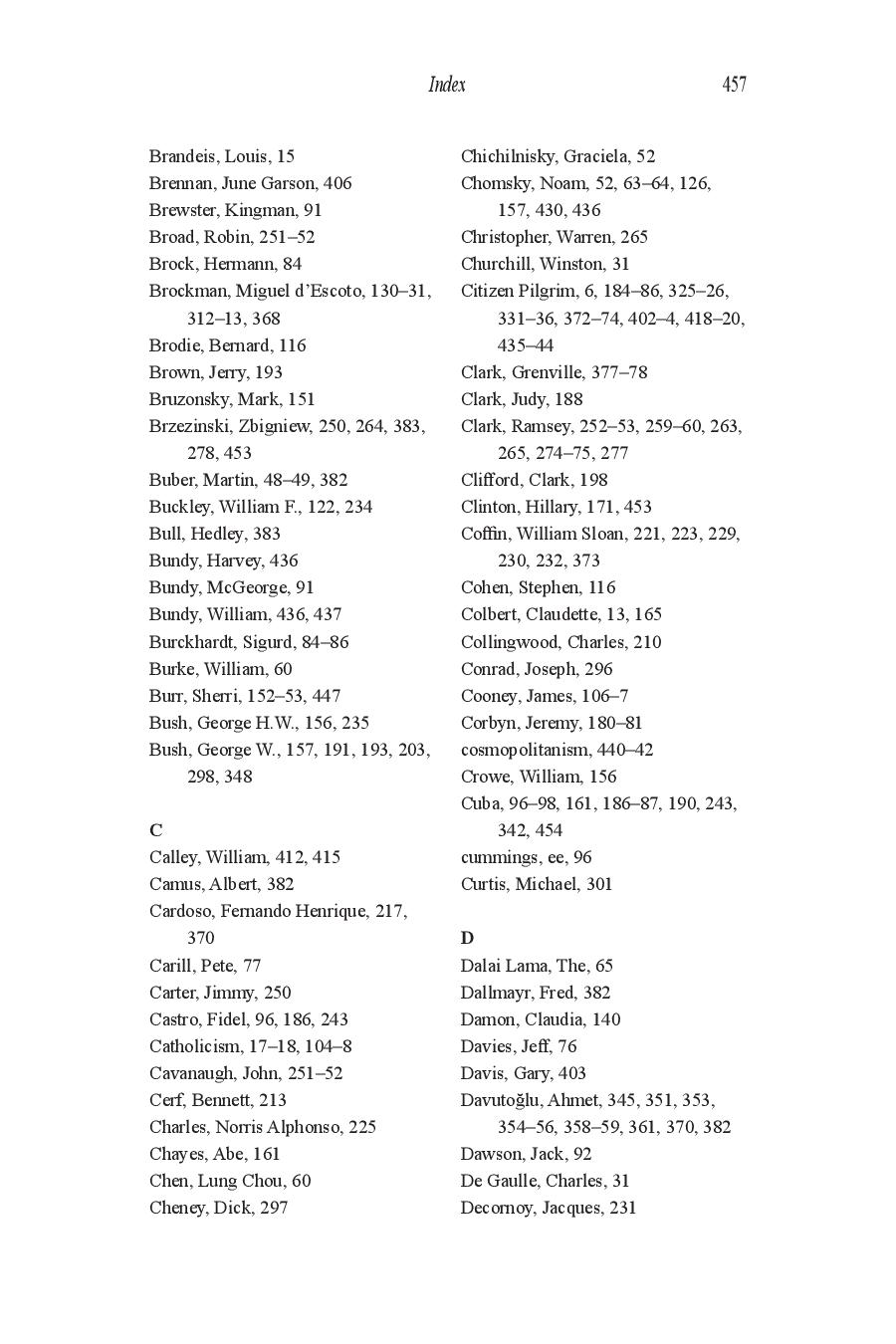 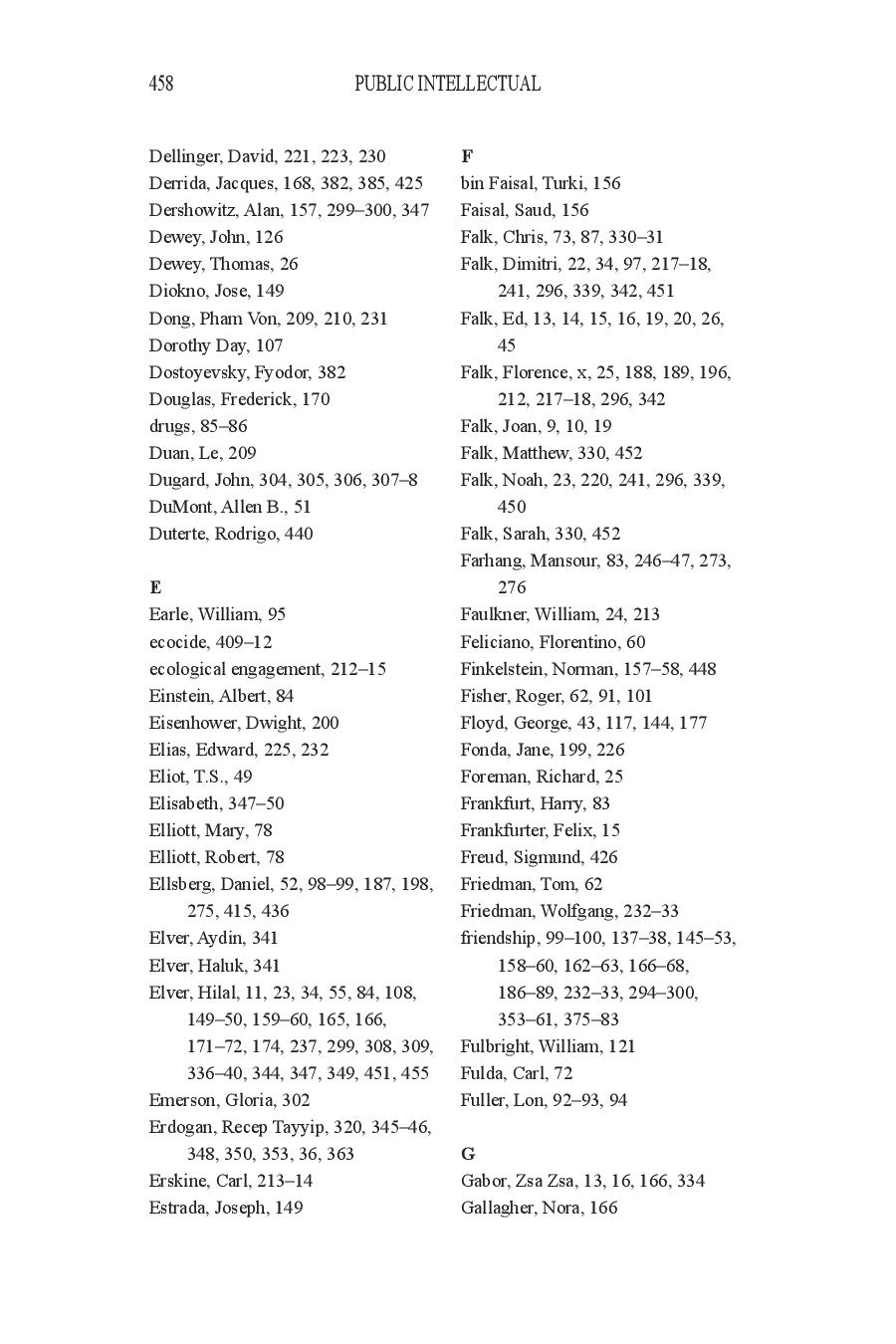 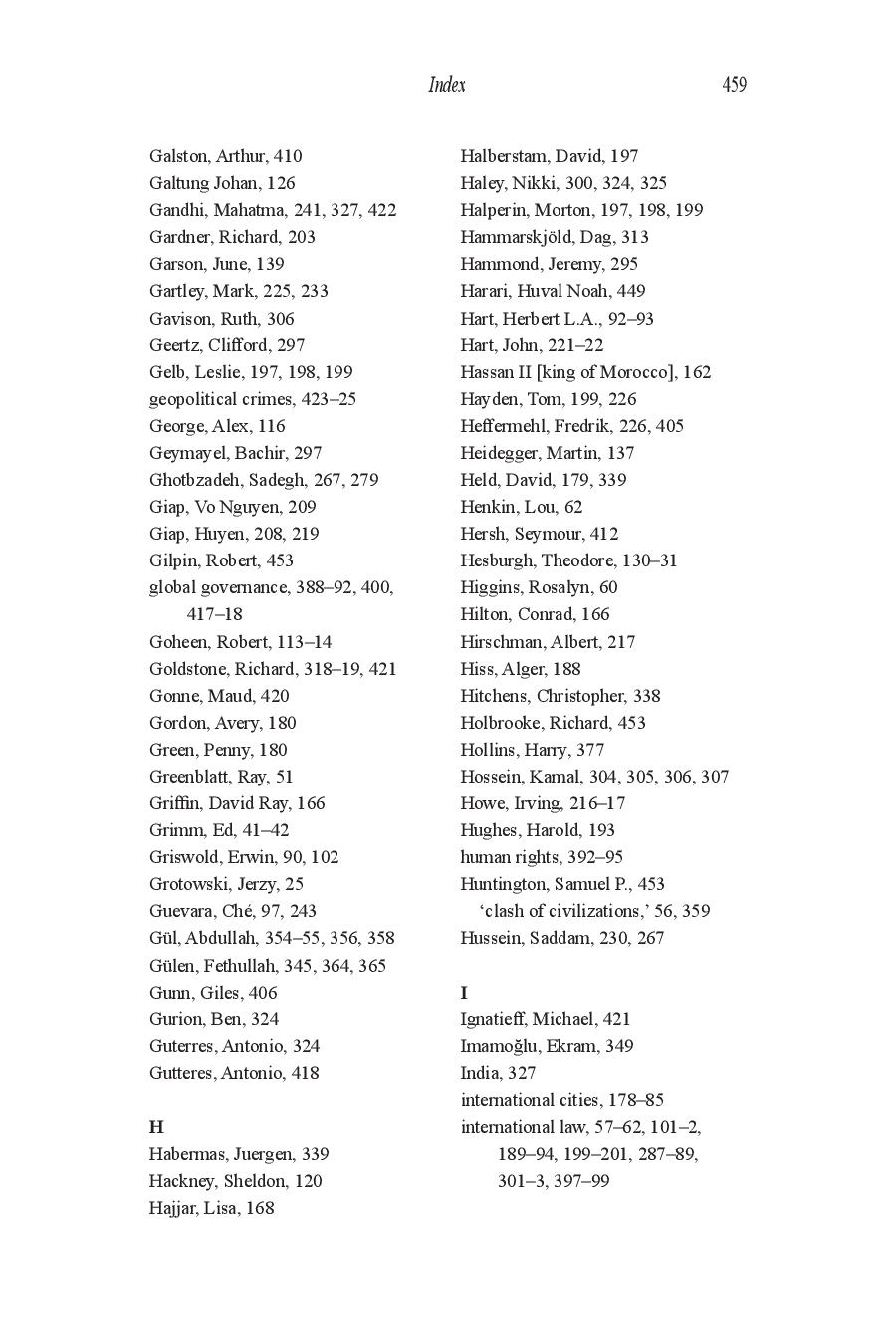 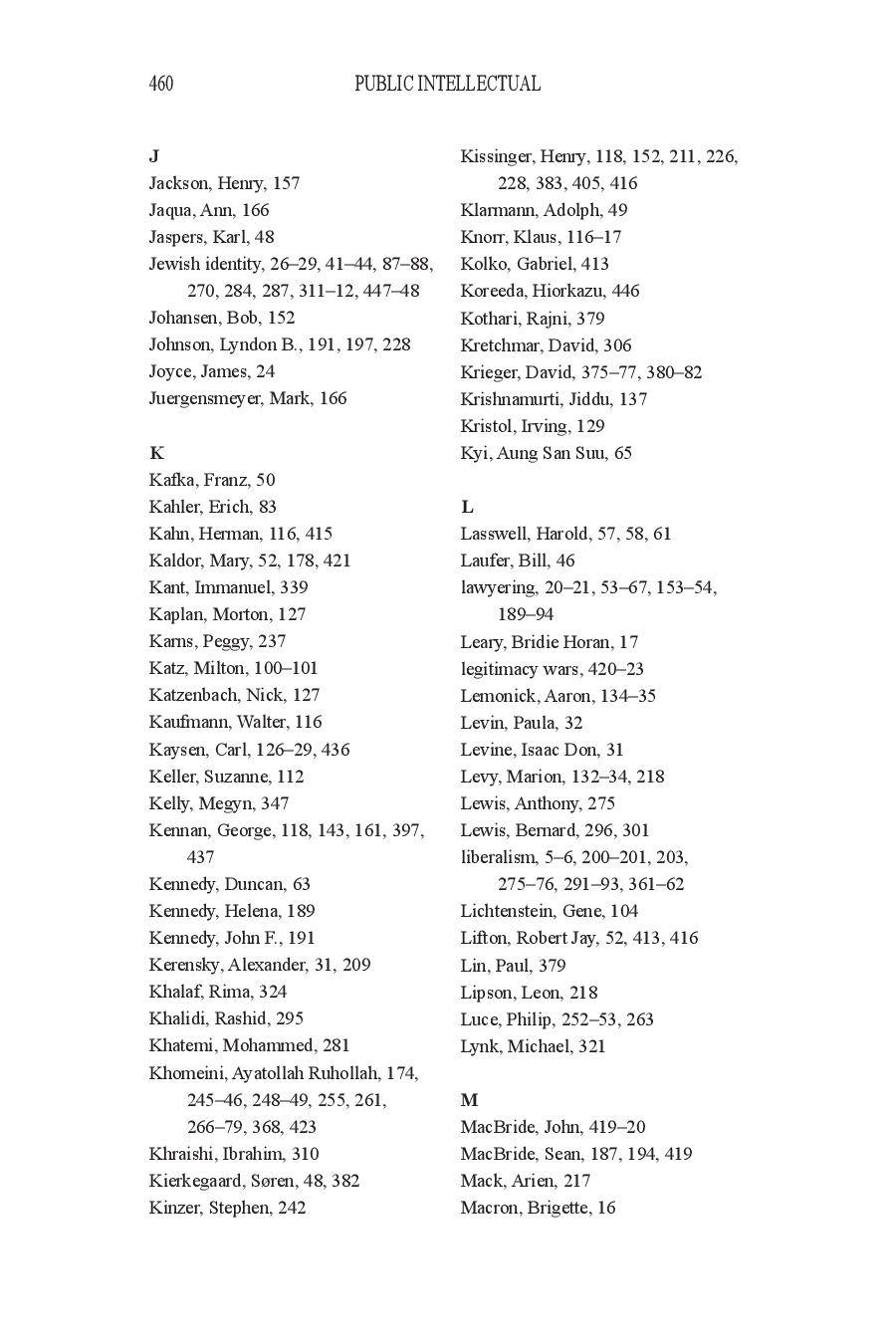 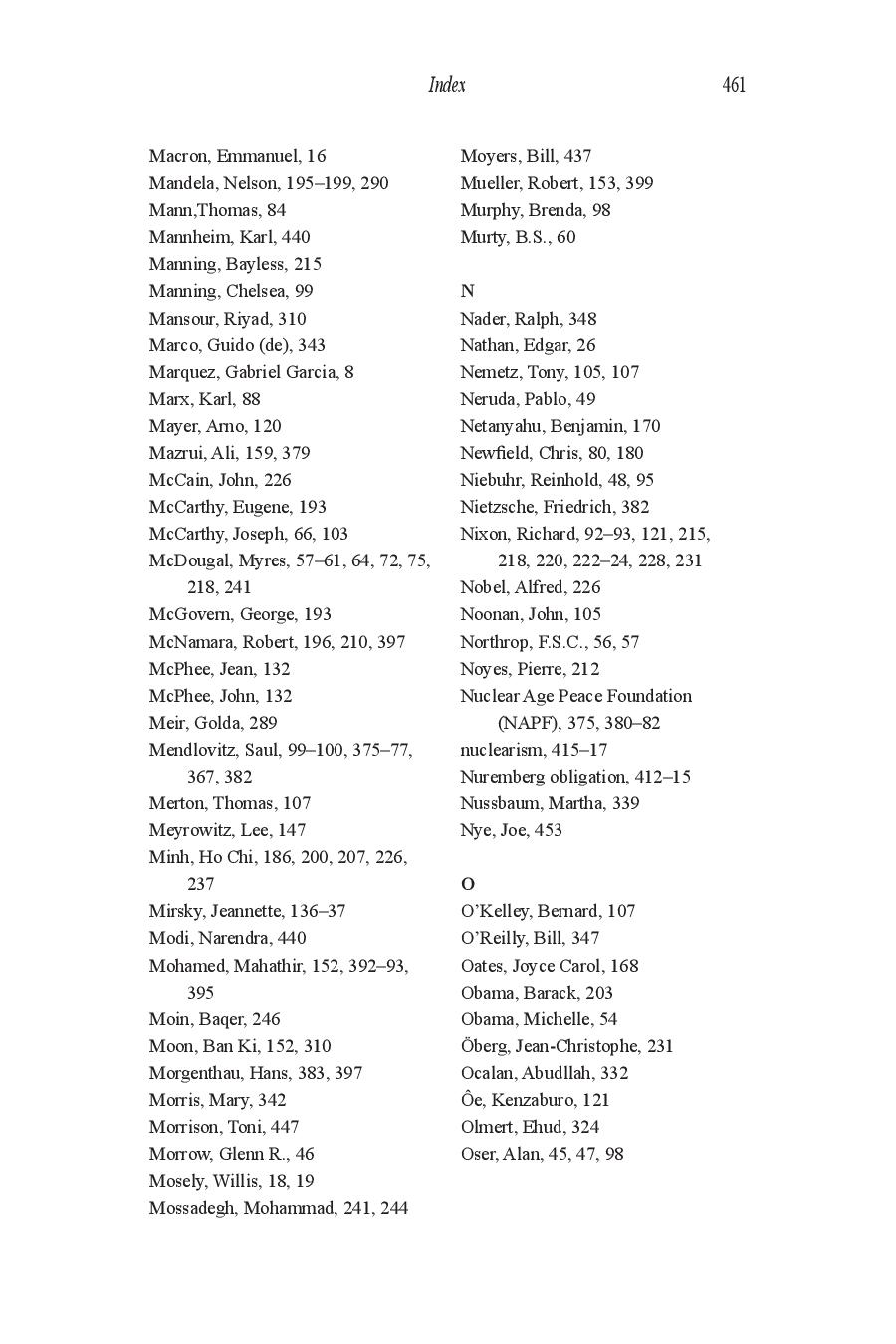 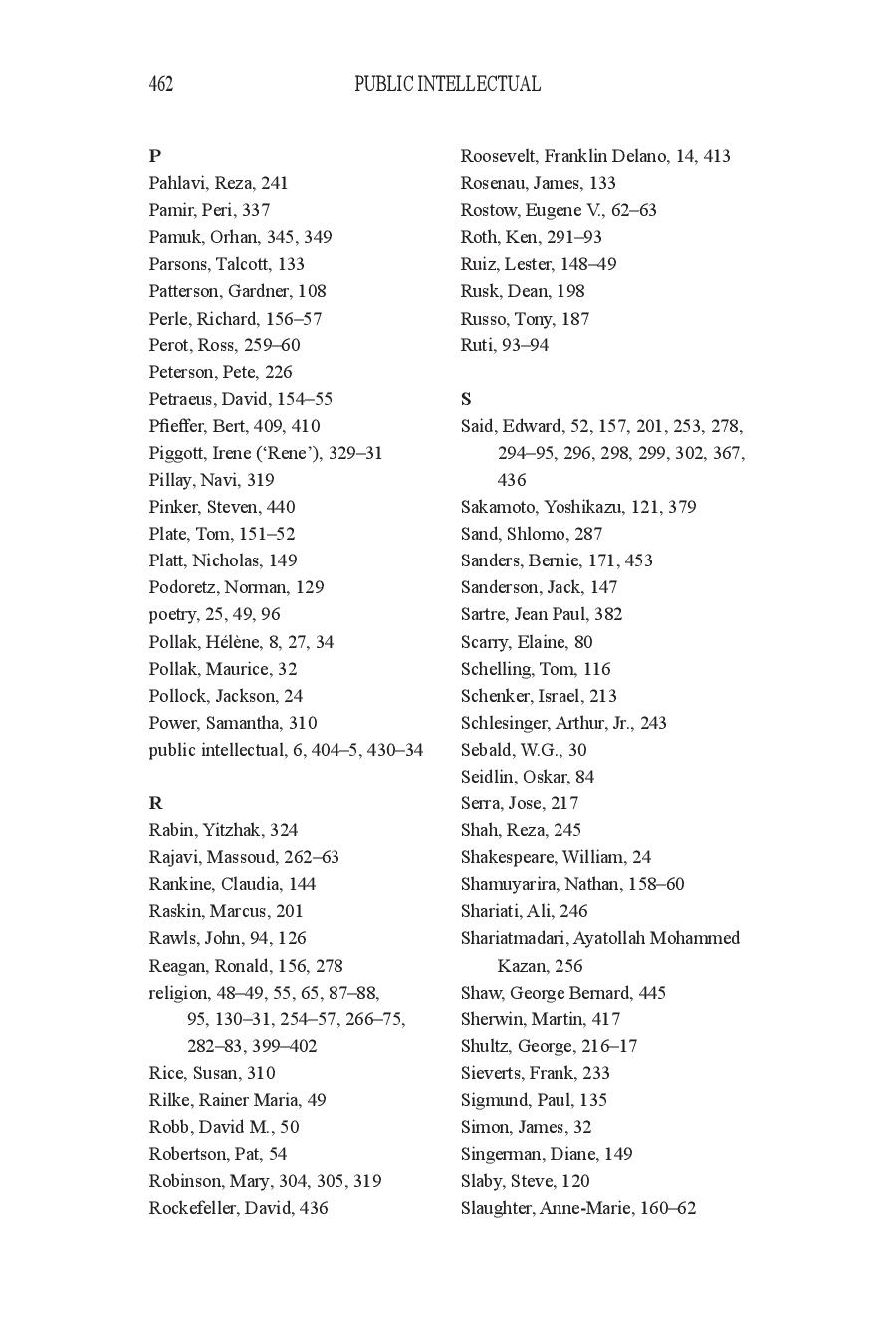 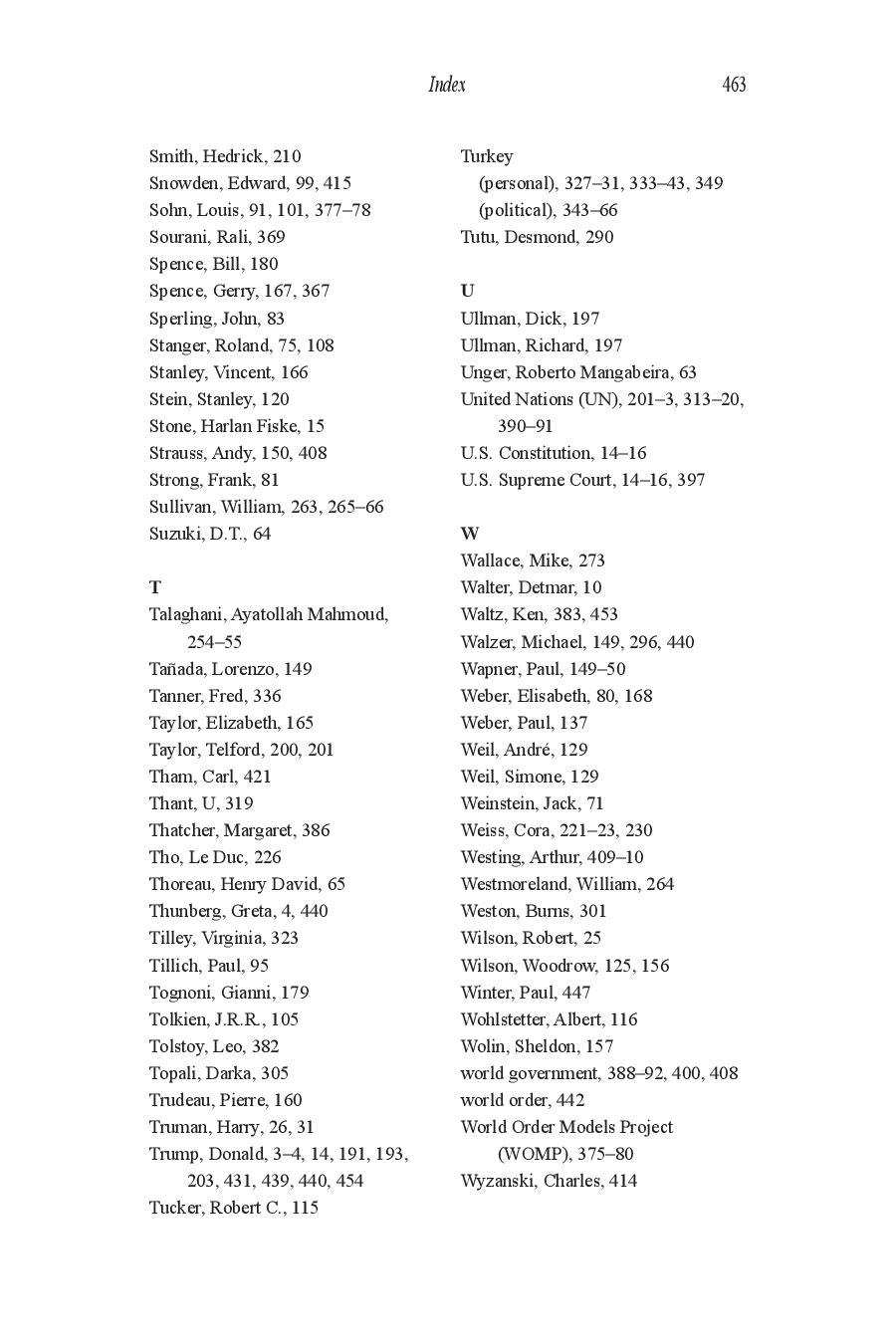 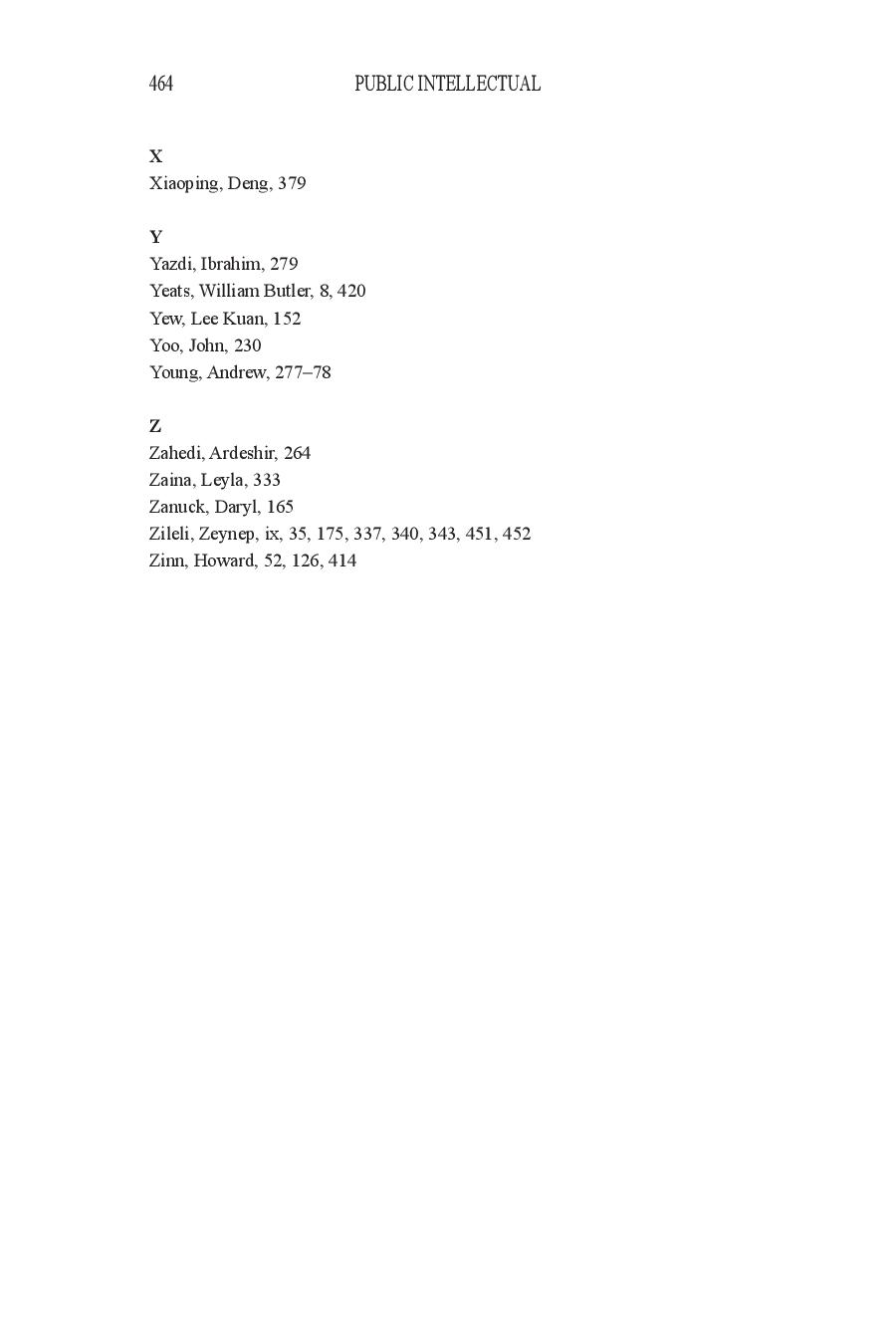 This political memoir reveals how Richard Falk became prominent in America and internationally as both a public intellectual and citizen pilgrim. Falk built a life of progressive commitment, highlighted by visits to North Vietnam where he met PM Pham Von Dong, to Iran during the Islamic Revolution after meeting Khomeini in Paris, to South Africa where he met with Nelson Mandela at the height of the struggle against apartheid, and frequently to Palestine and Israel. His memoir is studded with encounters with well-known public figures in law, academia, political activism and even Hollywood.

His publications and activism describe various encounters with embedded American militarism, especially as expressed by governmental resistance to responsible efforts to rid the world of nuclear weapons, and his United Nations efforts on behalf of the rights of the Palestinian people. In 2010 he was named Outstanding Public Scholar in Political Economy by the International Studies Association. He has been nominated annually for the Nobel Peace Prize since 2009.

“This intimate and penetrating account of a remarkable life is rich in insights about topics ranging from the academic world to global affairs to prospects for a livable society.  A gripping story, with many lessons for a troubled world.” NOAM CHOMSKY

“Richard Falk is one of the few great public intellectuals and citizen pilgrims who has preserved his integrity and consistency in our dark and decadent times. This wise and powerful memoir is a gift that bestows us with a tear-soaked truth and blood-stained hope”.  CORNEL WEST

“Richard Falk’s Public Intellectual is a citizen pilgrims journey across the world , over  nearly a century, contributing to peace in Vietnam, Iran, Palestine …Through his life and ideas he invites us to imagine and shape the ‘politics of impossibility ‘  to heal our ‘endangered planet’  and our fractured societies.  Whether you are a peace activist or researcher, or you care about the earth and fellow human beings , Public Intellectual will enrich you intellectually and  politically.” VANDANA SHIVA

“Richard Falk recounts a life well spent trying to bend the arc of international law toward global justice. A Don Quixote tilting nobly at real dragons. His culminating vision of a better or even livable future—a ‘necessary utopia’—evokes with current urgency the slogan of Paris, May 1968: ‘Be realistic: demand the impossible.’” DANIEL ELLSBERG

“Richard Falk is universally regarded as one of the top minds when it comes to international law.” WALDEN BELLO, Foreign Policy in Focus

“”In this ‘political memoir’, internationally respected scholar of international law, Richard Falk, at 90 gives a frank and personal account of his evolution to a ‘citizen pilgrim’. Falk has made considerable contributions to international law. His notable four volume work The Vietnam War and International Law (1968–76) was central in the legal debates around the Vietnam War…His present book is not only of interest to those who lived through the same times as Falk, but also for those reflecting on the contributions of academics for justice, peace and environment… Public Intellectual: The Life of a Citizen Pilgrim is elegant, personal, relevant and thought-provoking.” PETER WALLENSTEIN, Journal of Peace Research

“This book should be an inspiration to many young lawyers and academics who want to serve justice and not just join the Wall Street rat race, become Washington consultants or work for dubious think tanks.” ALFRED DE ZAYAS, Netherlands International Law Review

“Falk’s unique intellectual and political career poses a profound challenge to anybody working in International Relations: is it possible really to understand the dynamics of world politics without also participating passionately in its events? Many scholars argue that there should be a responsibility of objectivity in the social sciences; but Falk has never tried to be ‘neutral’. All his works were consciously born from a partisan attempt to change reality and to take a side. Nobody else is likely to be a witness to so many world events as Richard Falk; but he is teaching us that, to understand International Relations, and indeed the social sciences more broadly, scholars should be brave enough to enter the political arena..” DANIELE ARCHIBUGI, International Affairs

“The 2008 global meltdown spotlighted America’s own legions of greedy wolf warriors, feeding at the trough. Neither America’s nor China’s wolf warriors offer happy returns, but only our best deep thinkers, it seems, know this. One is Richard Falk who, in his just-published political memoir Public Intellectual, is as successful as anyone in making the point that what’s needed is not simply a course correction but a new course.” TOM PLATE, South China Morning Post

This political memoir reveals how Richard Falk became prominent in America and internationally as both a public intellectual and citizen pilgrim. Interwoven and enriched with personal accounts of his living, learning and loving in many parts of the world. Falk’s journey began with a comfortable, yet troubled, childhood in New York City that included a conservative political and secular background, leading on to an Ivy League education. From there, Falk built a life of progressive commitment, highlighted by visits to North Vietnam during the Vietnam War, to Iran during the Islamic Revolution, to South Africa at the height of the struggle against apartheid, and frequently to Palestine and Israel. This led to his enduring many defamatory attacks launched by militants defending U.S. foreign policy, and especially in reaction to his expressions of solidarity with the Palestinian struggle to achieve basic rights and a just peace. The assault reached its height during the six-year period when Falk served as UN Special Rapporteur for Human Rights in Occupied Palestine.

Along the way, while a professor of international law at Princeton University, he has published more than 50 books on many scholarly topics, including studies of the profound dangers now facing humanity, the relevance of international law and the UN, and prospects for transforming world order in the direction of peace, justice, and ecological viability. His publications and activism describe various encounters with embedded American militarism, especially as expressed by governmental resistance to responsible efforts to rid the world of nuclear weapons. In the course of his travels, teaching, and writing, Falk has dealt with many leading personalities around the world. Aside from a life of travel, commitment, and personal intimacy two themes have dominated his public roles—engaging with the controversies of the present and envisioning a future of world order that is humane and sensitive to ecological limits. To find coherence, he has published a book of poems, Waiting for Rainbows.

Richard Falk is a leading international law professor, prominent activist, prolific author, and a pioneer thinker dedicated to peace and justice. During forty years at Princeton University Falk was active in seeking an end to the Vietnam War, a better understanding of Iran, a just solution for Israel/Palestine, and improved democracy in South Korea, South Africa, India, and the Philippines. He also served as UN Special Rapporteur for Occupied Palestine. His books include This Endangered Planet, A Study of Future Worlds; Power Shift, Revisiting the Vietnam War, Palestine Horizon, On Nuclearism. In 2010 he was named Outstanding Public Scholar in Political Economy by the International Studies Association. Since 2009 he has been nominated annually for the Nobel Peace Prize.

12 reviews for PUBLIC INTELLECTUAL: The Life of a Citizen Pilgrim

A. B. Abrams
Quick View
X