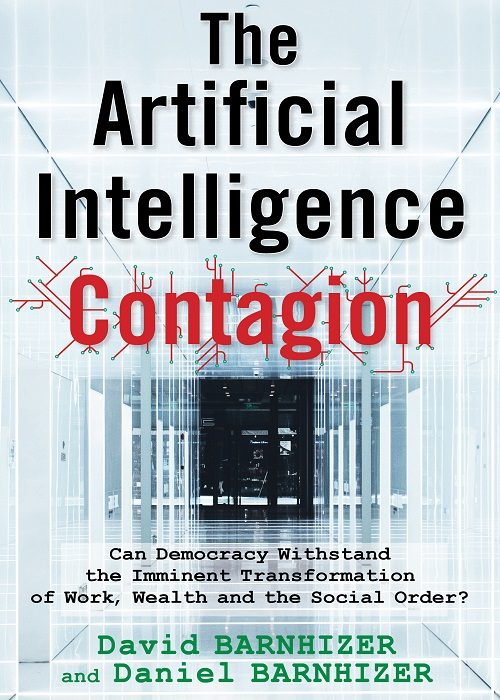 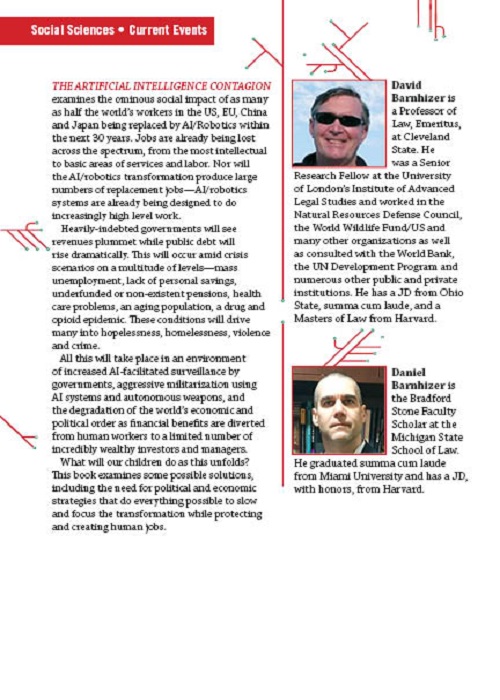 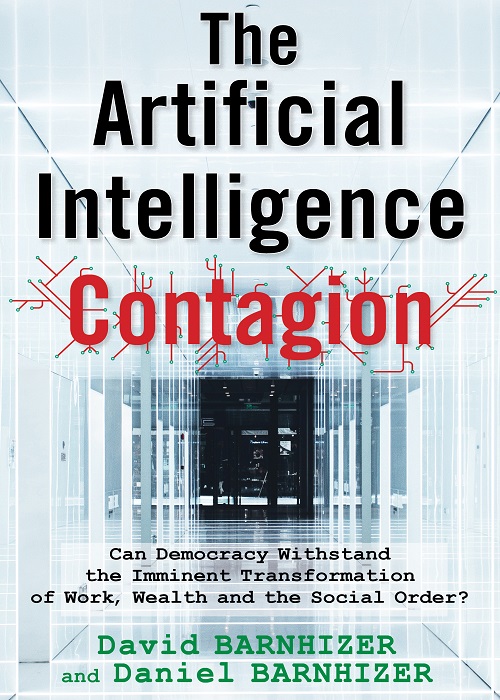 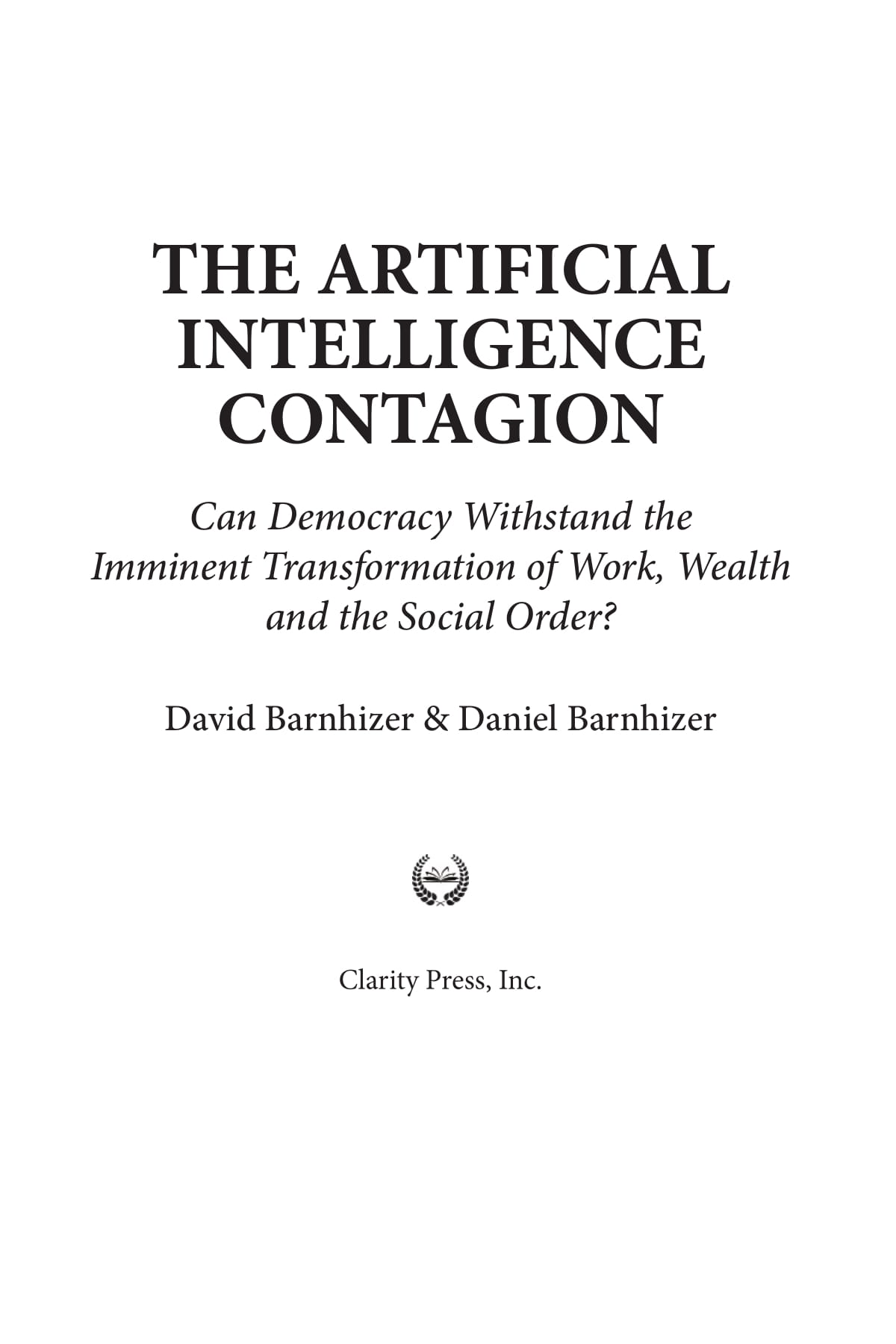 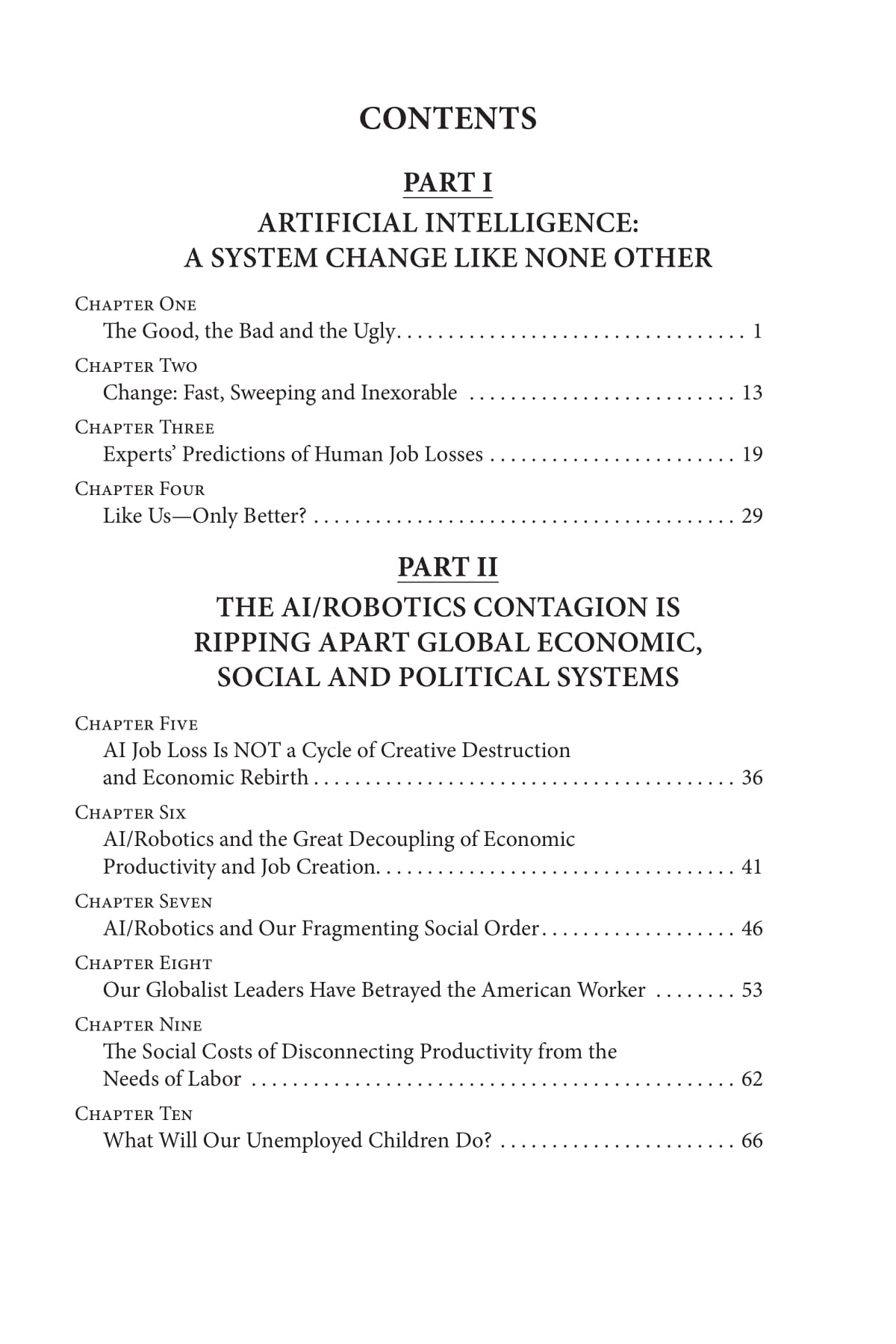 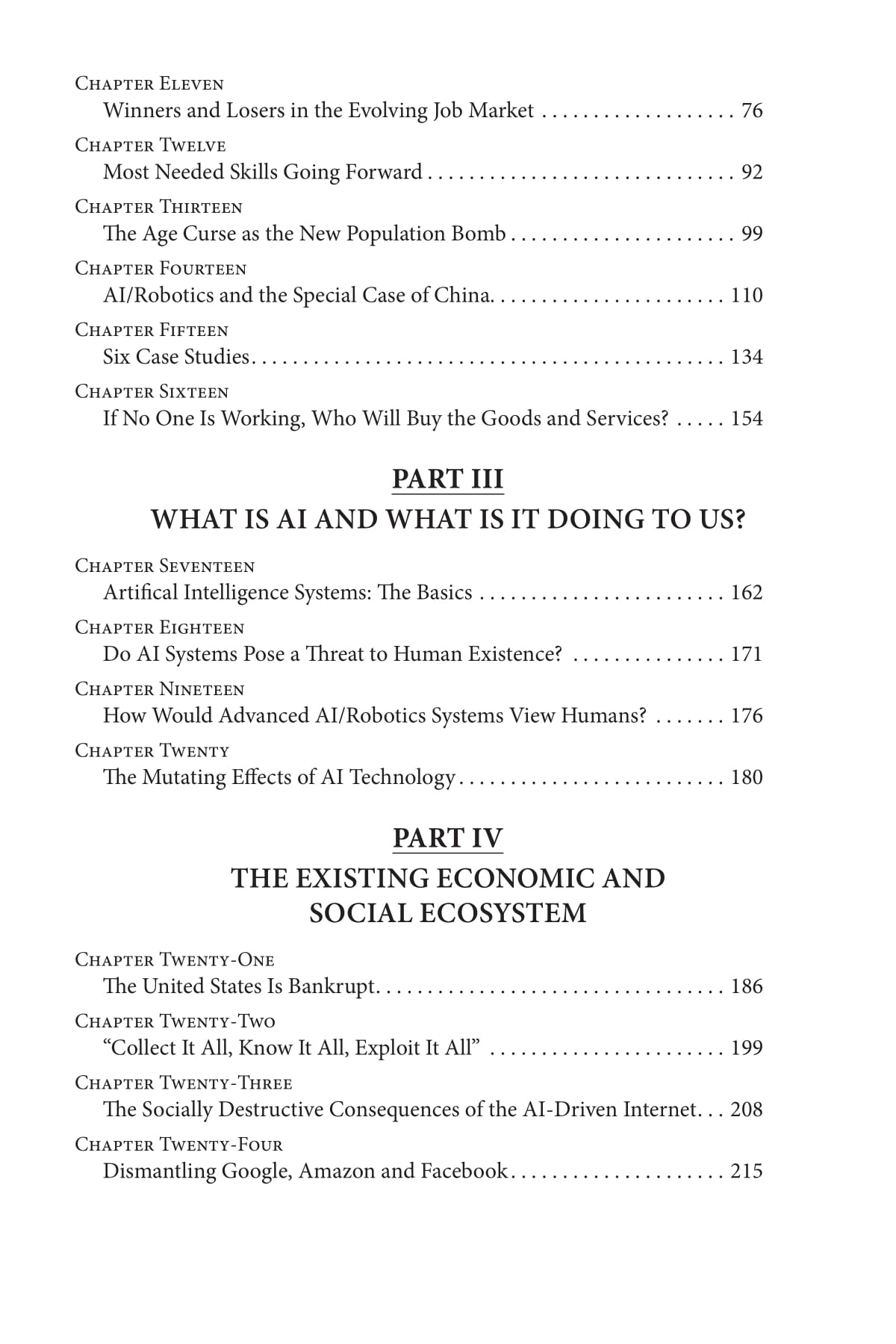 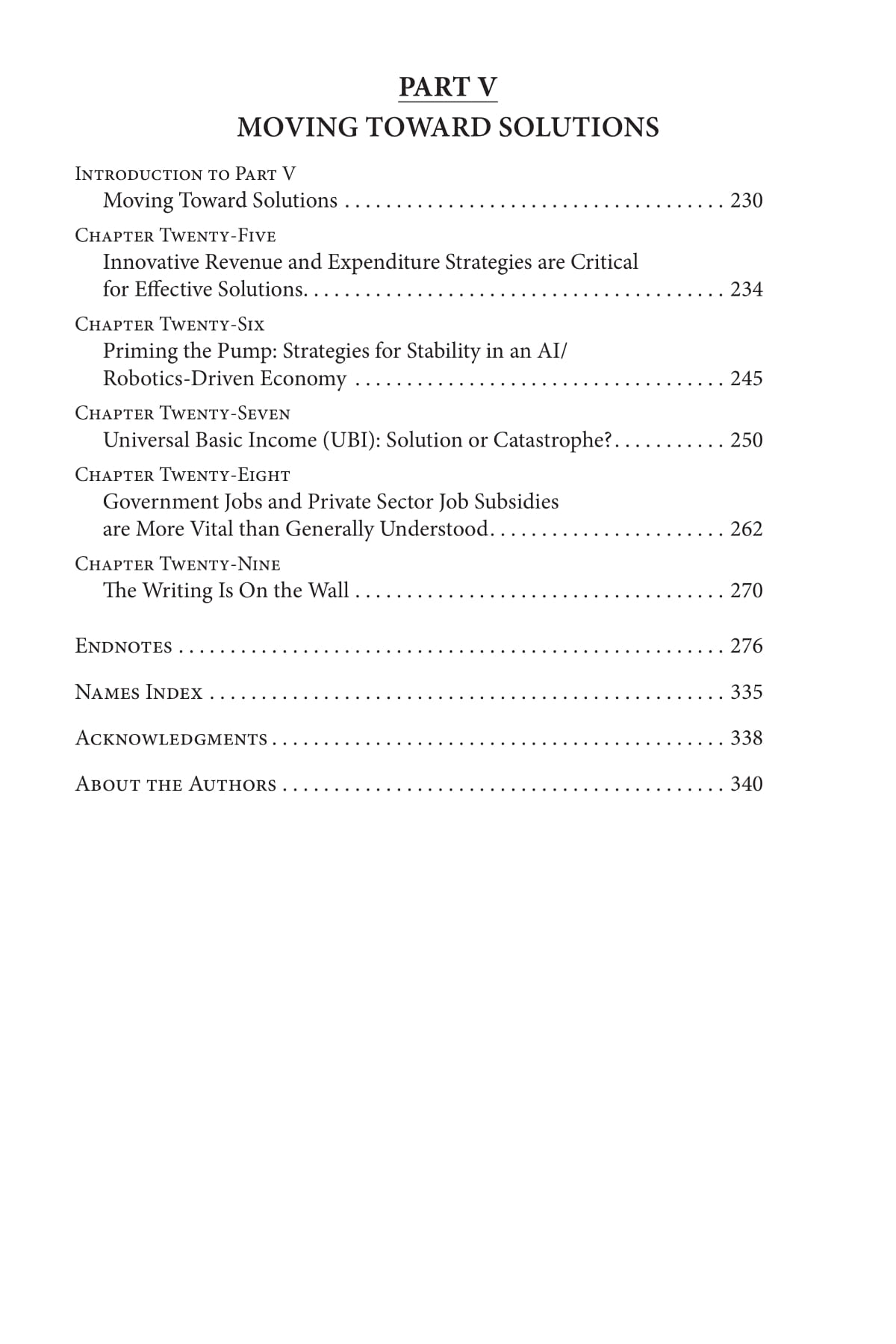 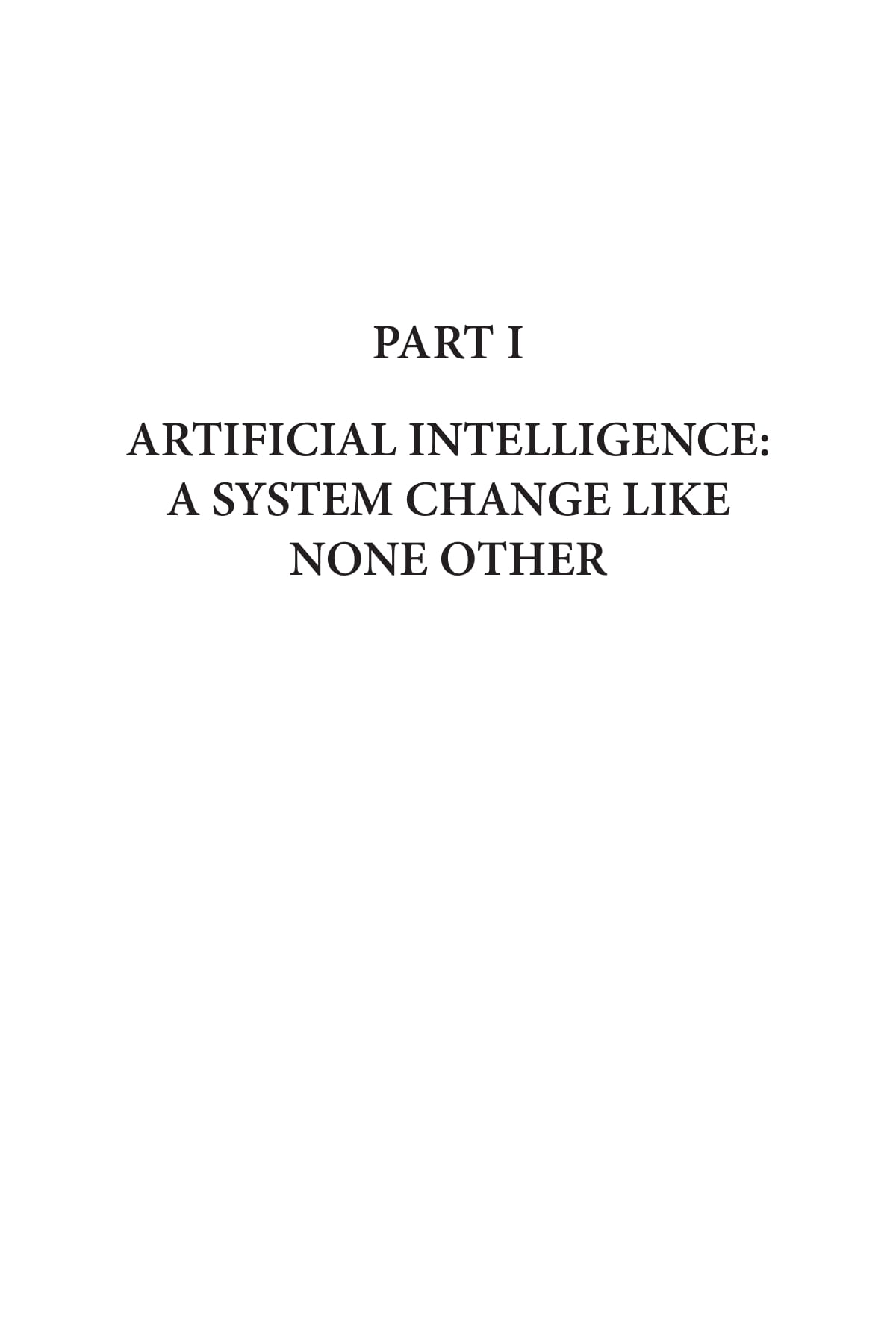 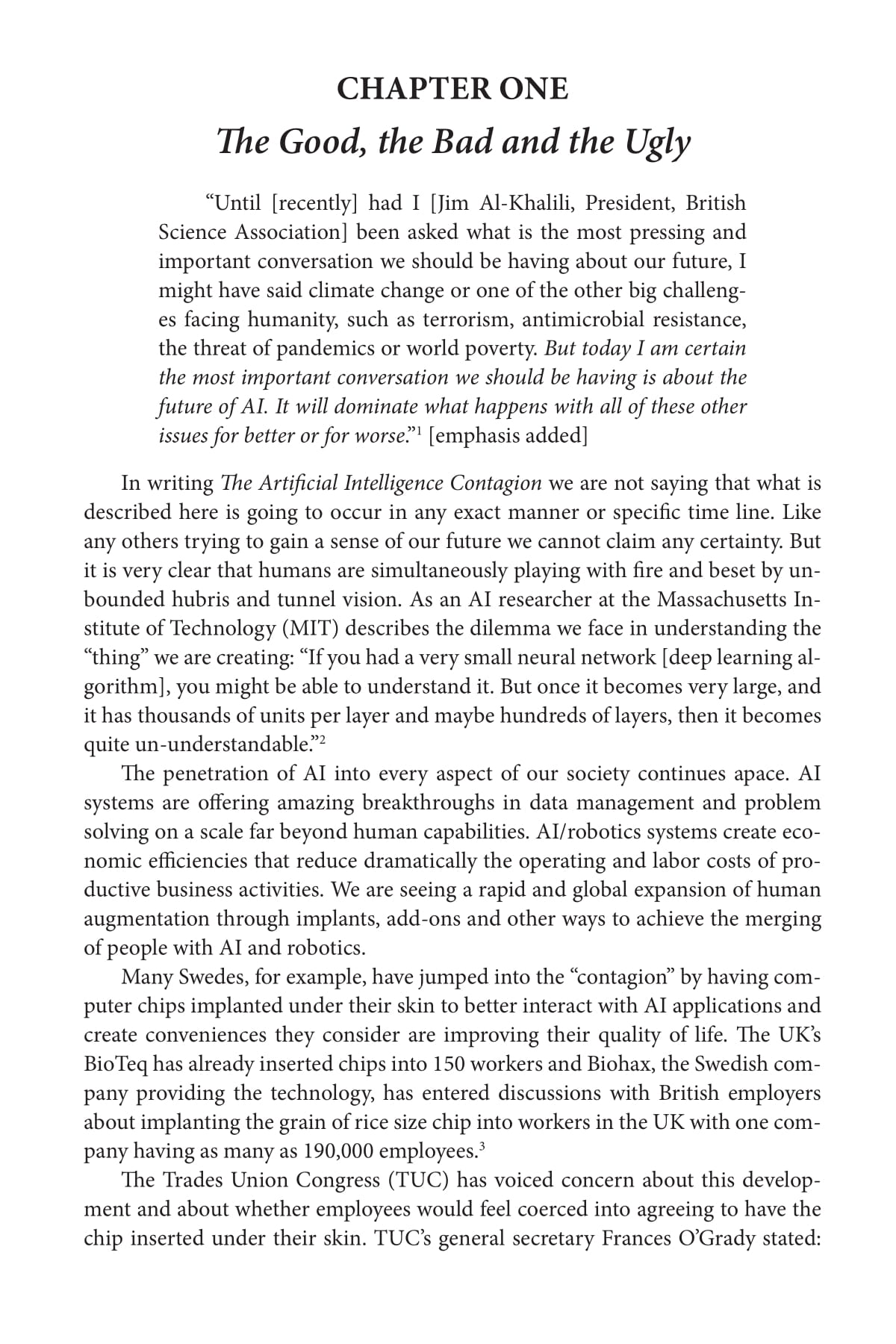 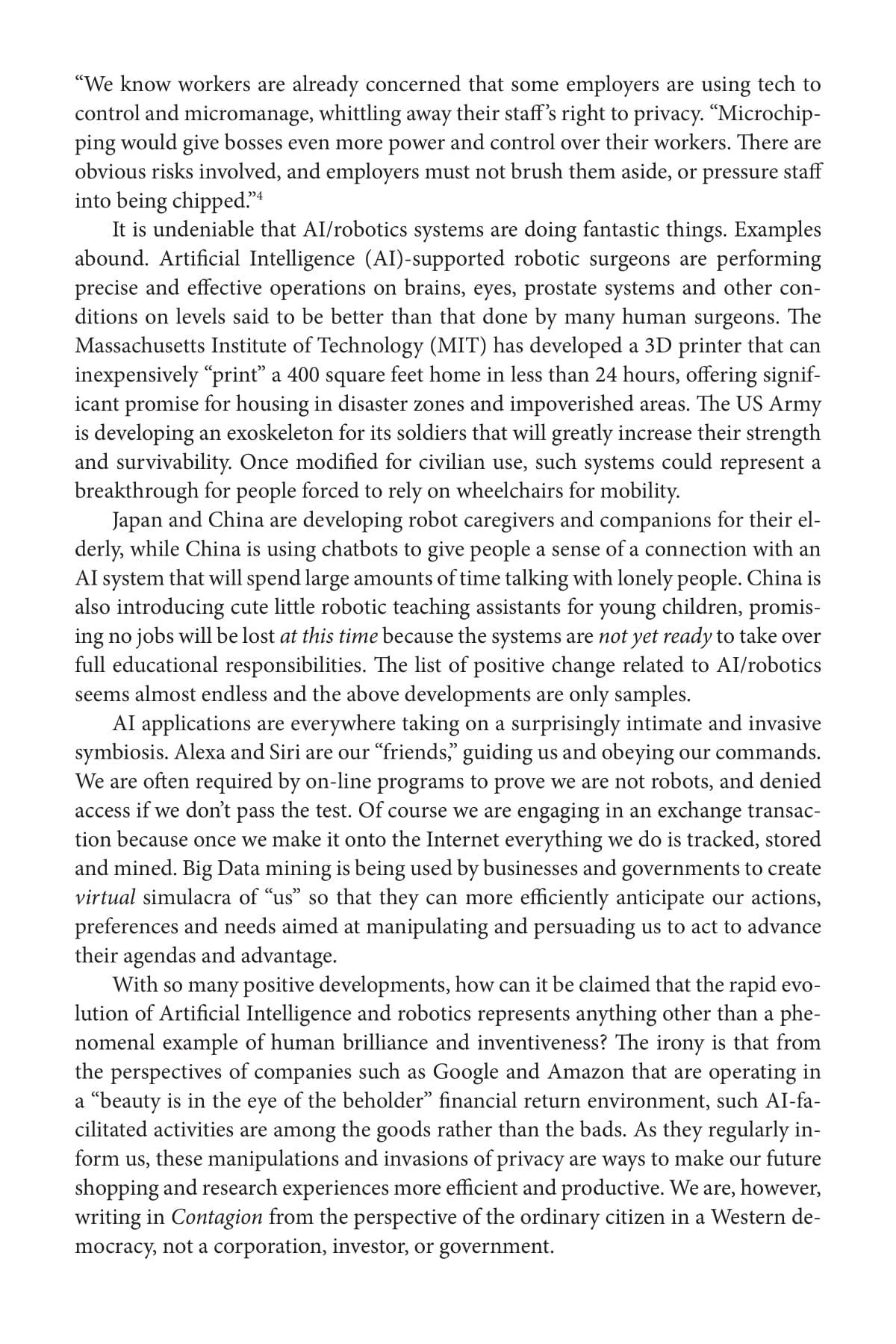 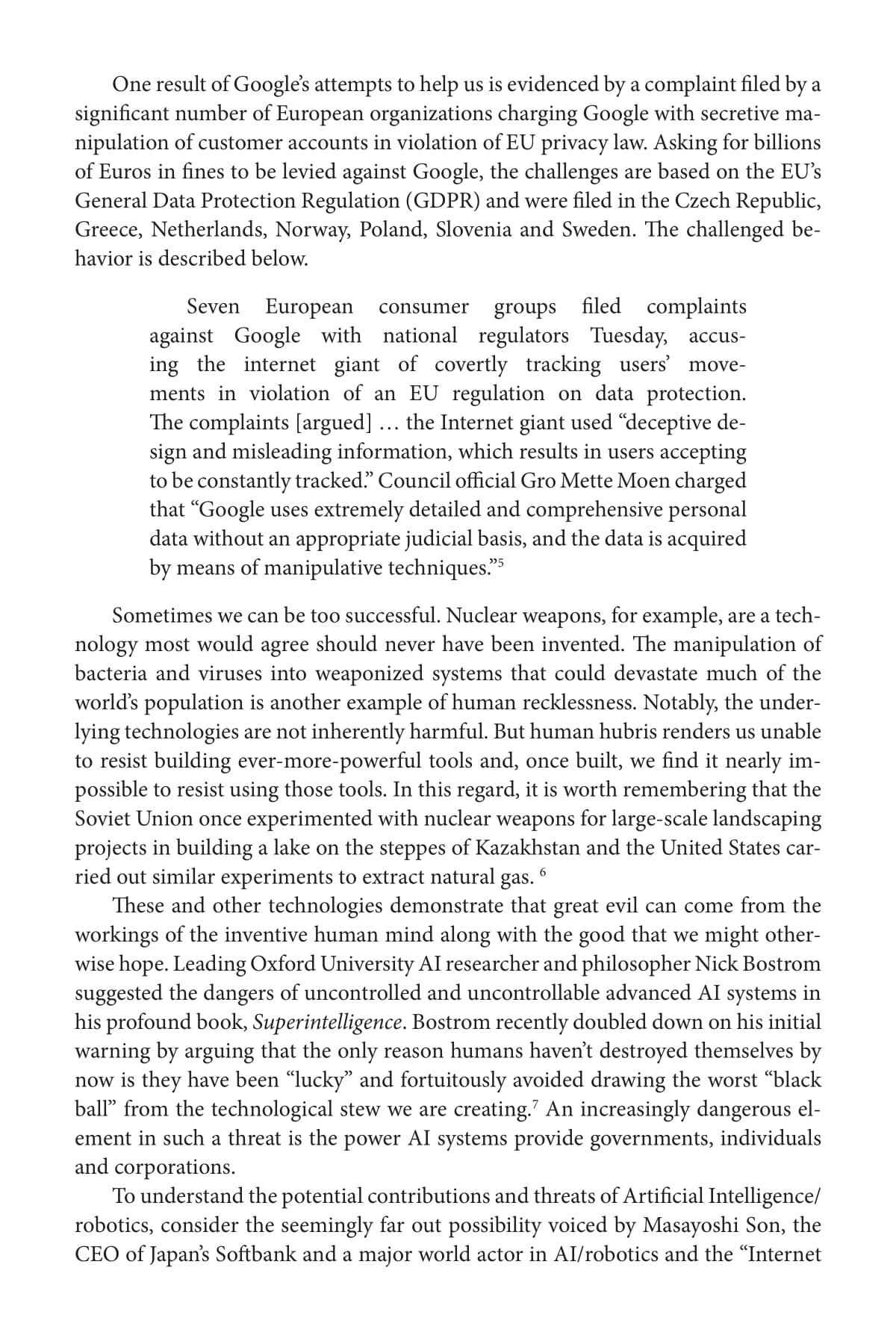 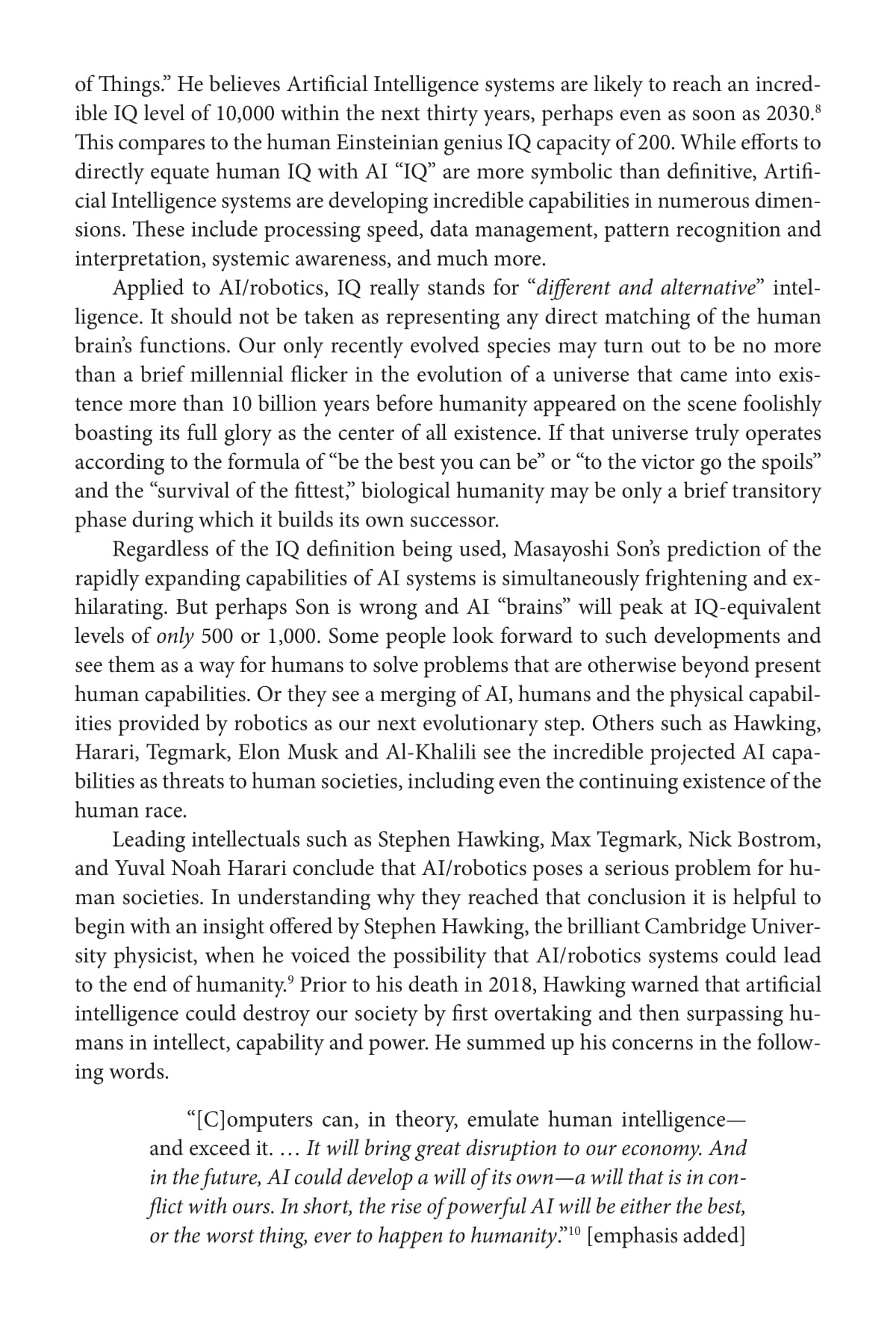 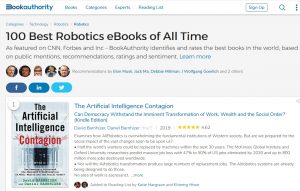 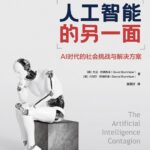 MASSIVE SOCIETAL DISRUPTION IS IN THE CARDS

As AI/robotics eliminates jobs across the spectrum, governmental revenues will plummet while the debt increases dramatically.  This crisis of limited resources on all levels—underfunded or non-existent pensions, health problems, lack of savings, and job destruction without comparable job creation—will drive many into homelessness and produce a dramatic rise in violence as we fight over shrinking resources.

“[T]he adverse economic impact of robotics is already upon us. Thus, the main focus of the coauthors is on the massive economic dislocation that will result from making people superfluous… Read The Artificial Intelligence Contagion and then tell me about the benefits.” —PAUL CRAIG ROBERTS

“A sobering look at the far-reaching impact that artificial intelligence may have on the economy, the workforce, democracy and all of humanity. The Artificial Intelligence Contagion is a bellwether for anyone seeking to comprehend the global disruption coming our way.”—DAVID COOPER, President and Technologist , Massive Designs

Rights to a Chinese edition have been acquired by a major Chinese firm, Publishing House of Electronics Industry (PHEI) Co., Ltd, Beijing. 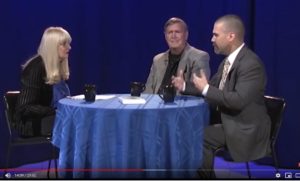 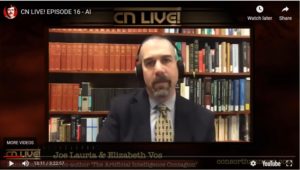 THE ARTIFICIAL INTELLIGENCE CONTAGION: Can Democracy Withstand the Imminent Transformation of Work, Wealth and Social Order? examines how AI/Robotics is overwhelming the fundamental institutions of Western society.  But are we prepared for the social impact of the vast changes soon to be upon us?

No area of work is sacrosanct. Work opportunities are being eliminated from the most “intellectual” activities down to the
basic areas of services and labor, including a range of professional occupations heretofore thought of as distinctly human:  in middle management, finance, banking, insurance, medicine, high-tech, transportation, law and even the arts.

Worse, it is playing out in the context of a set of critical issues.

As AI/robotics eliminates jobs across the spectrum, governmental revenues will plummet while the debt increases dramatically.  This crisis of limited resources on all levels—underfunded or non-existent pensions, health problems, lack of savings, and job destruction—will drive many into homelessness and produce a dramatic rise in violence as we fight over shrinking resources. All this will take place in an environment of increased AI-facilitated surveillance by governments, aggressive militarization using AI systems and autonomous weapons, and the degradation of the world’s economic and political order.

David Barnhizer is a Professor of Law Emeritus at Cleveland State University. He was a Senior Research Fellow at the University of London's Institute of Advanced Legal Studies and Visiting Professor at the Westminster University’s School of Law. He worked in the International Program of the Natural Resources Defense Council, was Executive Director of the Year 2000 Committee, and consulted with the World Resources Institute, IIED, the UNDP, the President’s Council on Environmental Quality, the World Bank, the UN/FAO, World Wildlife Fund/US, and the Mongolian government. He served as a director of Performance Capital Management, consultant for British Petroleum’s Sovonics Solar Systems, Rapporteur for the Foresight Capability Workshop of the House Energy and Commerce Committee, and worked on projects with various federal agencies. He received a Juris Doctor degree summa cum laude from Ohio State University and holds a Masters of Law degree from Harvard. His books include Strategies for Sustainable Societies, The Blues of a Revolution, Effective Strategies for Protecting Human Rights, The Warrior Lawyer, and Hypocrisy & Myth: The Hidden Order of the Rule of Law.

Daniel Barnhizer is the Bradford Stone Faculty Scholar at the Michigan State University School of Law. He graduated summa cum laude from Miami University and earned a Juris Doctor degree, with honors, from Harvard. He works in tax, contract law and theory, conservation law, comparative law, and the Rule ofLaw. He is coauthor of books in Contracts, Commercial Transactions, the Rule of Law, and directs MSU’s Conservation Law Program and its Institute for Comparative Law & Jurisprudence at Poland’s University of Bialystok Faculty of Law. He teaches regularly in Poland and Lithuania and was a Lecturer at Jinan University in China. He has extensive business experience and worked for the law firms of Hogan & Hartson and Cadwalader, Wickersham & Taft. He was judicial law clerk for the Honorable Richard L. Nygaard, U.S. Court of Appeals for the 3rd Circuit, and for the Honorable Robert B. Krupansky, U.S. Court of Appeals for the 6th Circuit.

5 reviews for THE ARTIFICIAL INTELLIGENCE CONTAGION Can Democracy Withstand the Imminent Transformation of Work, Wealth and the Social Order?