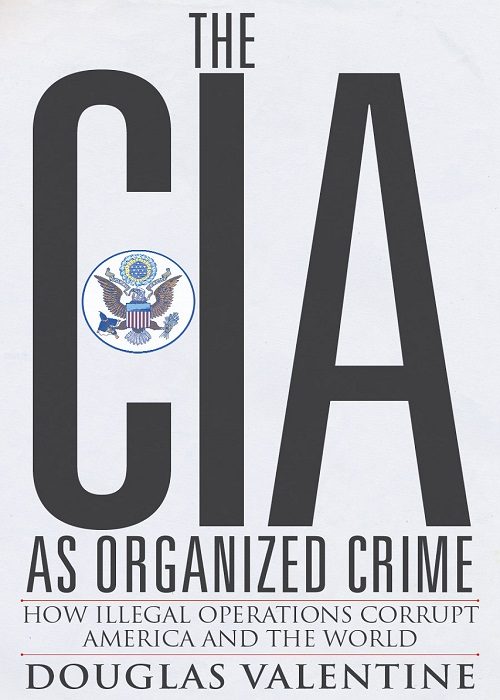 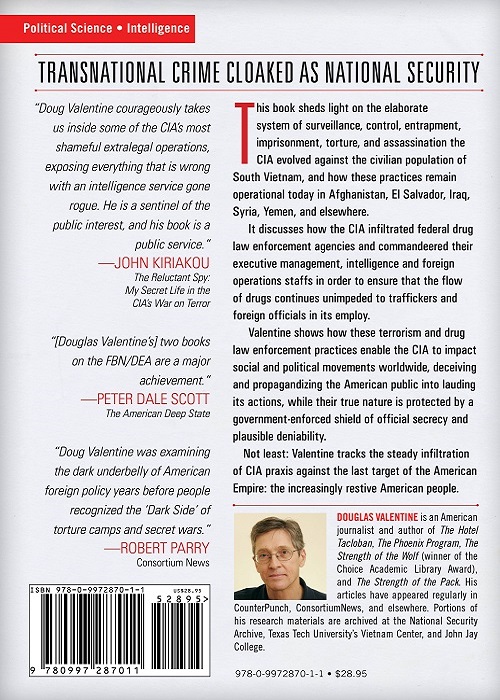 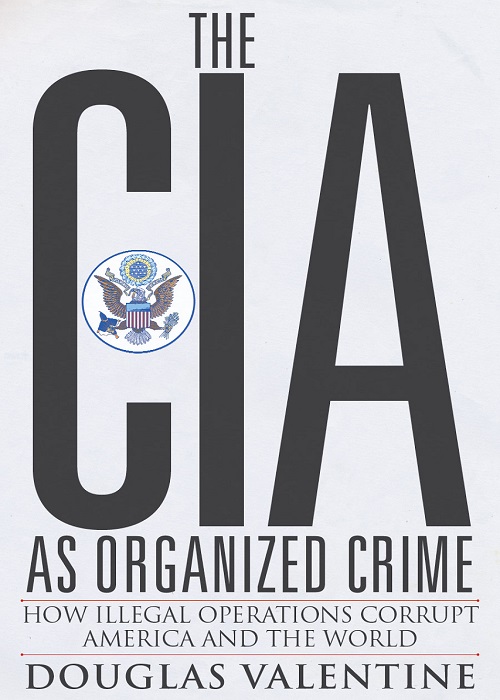 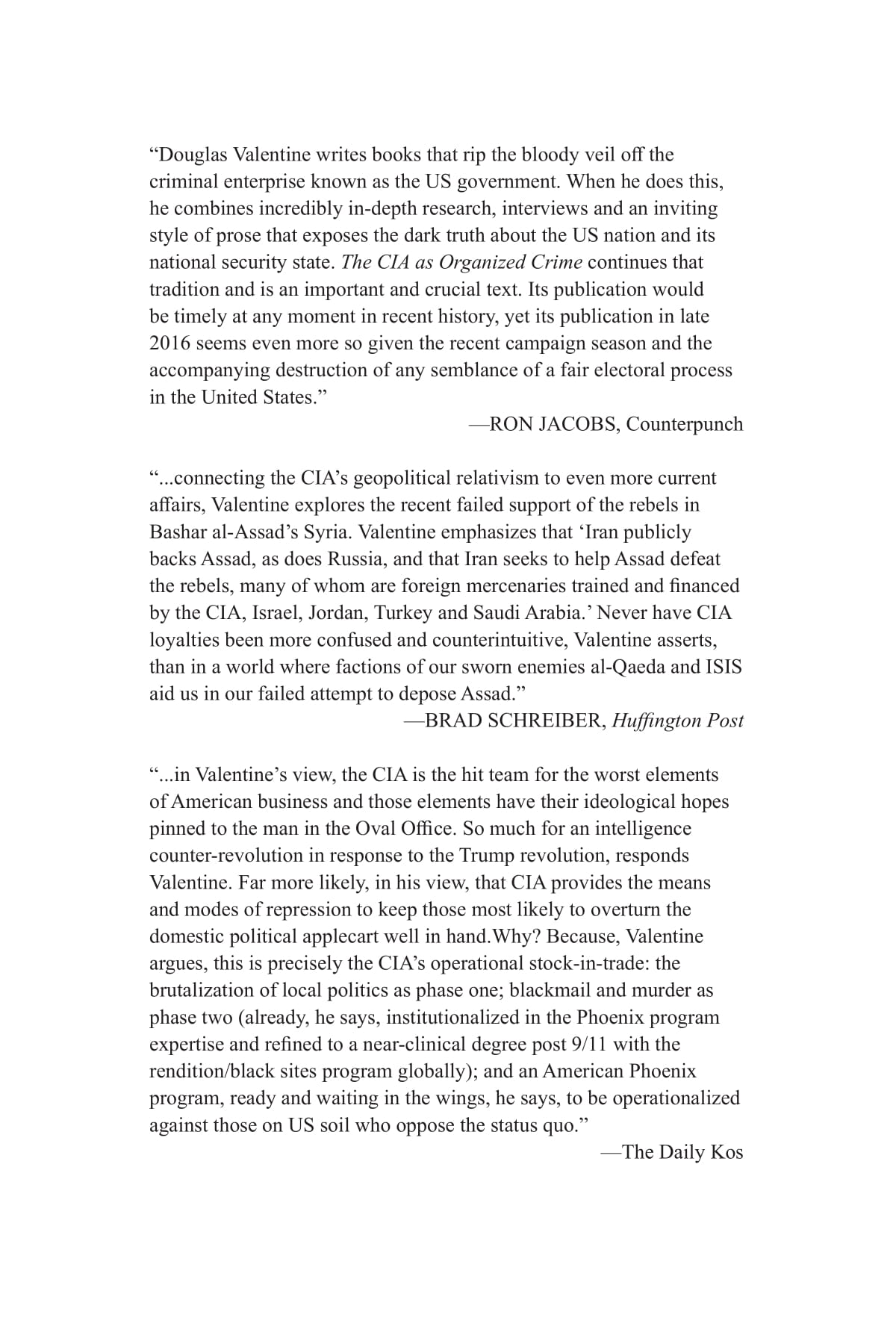 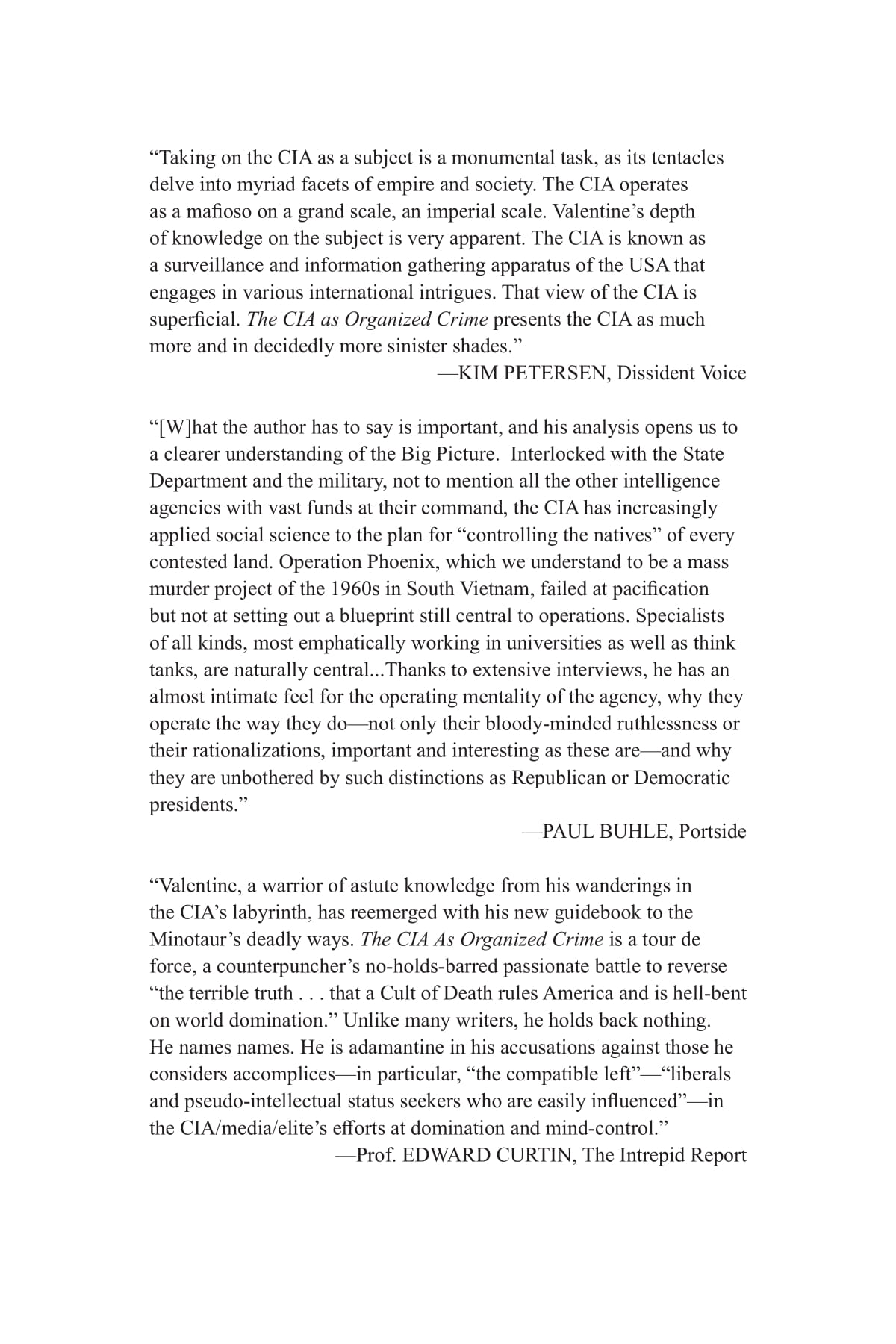 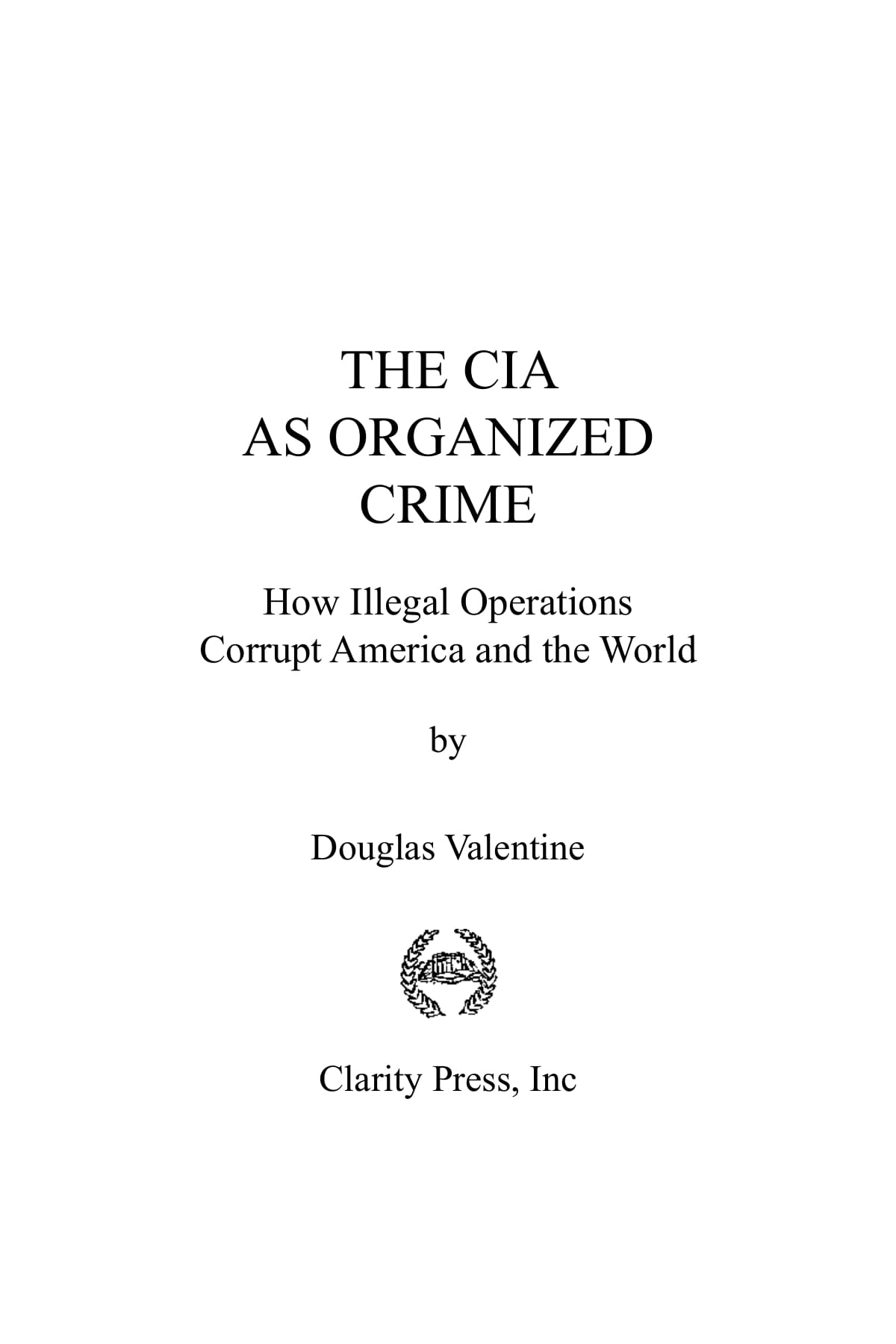 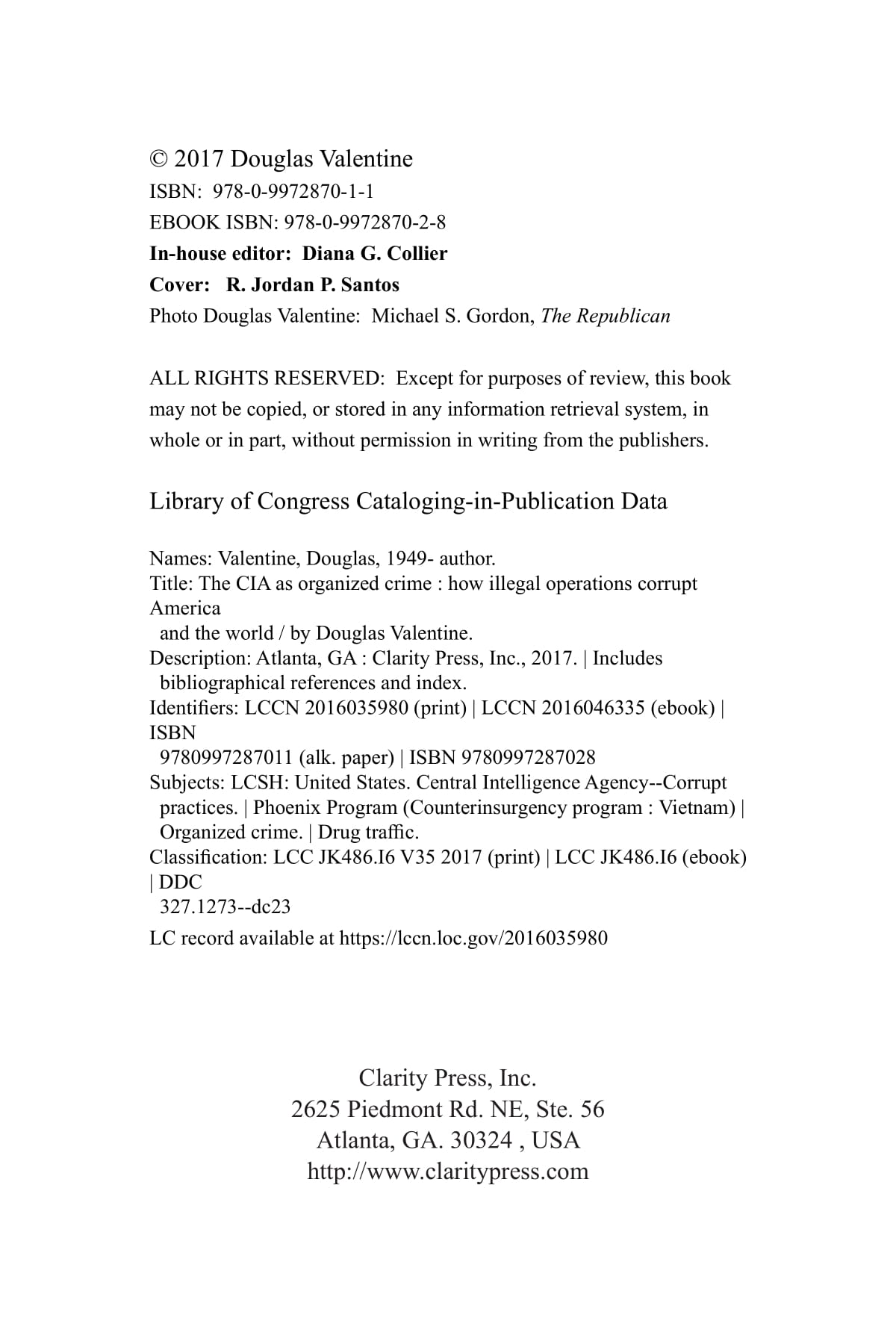 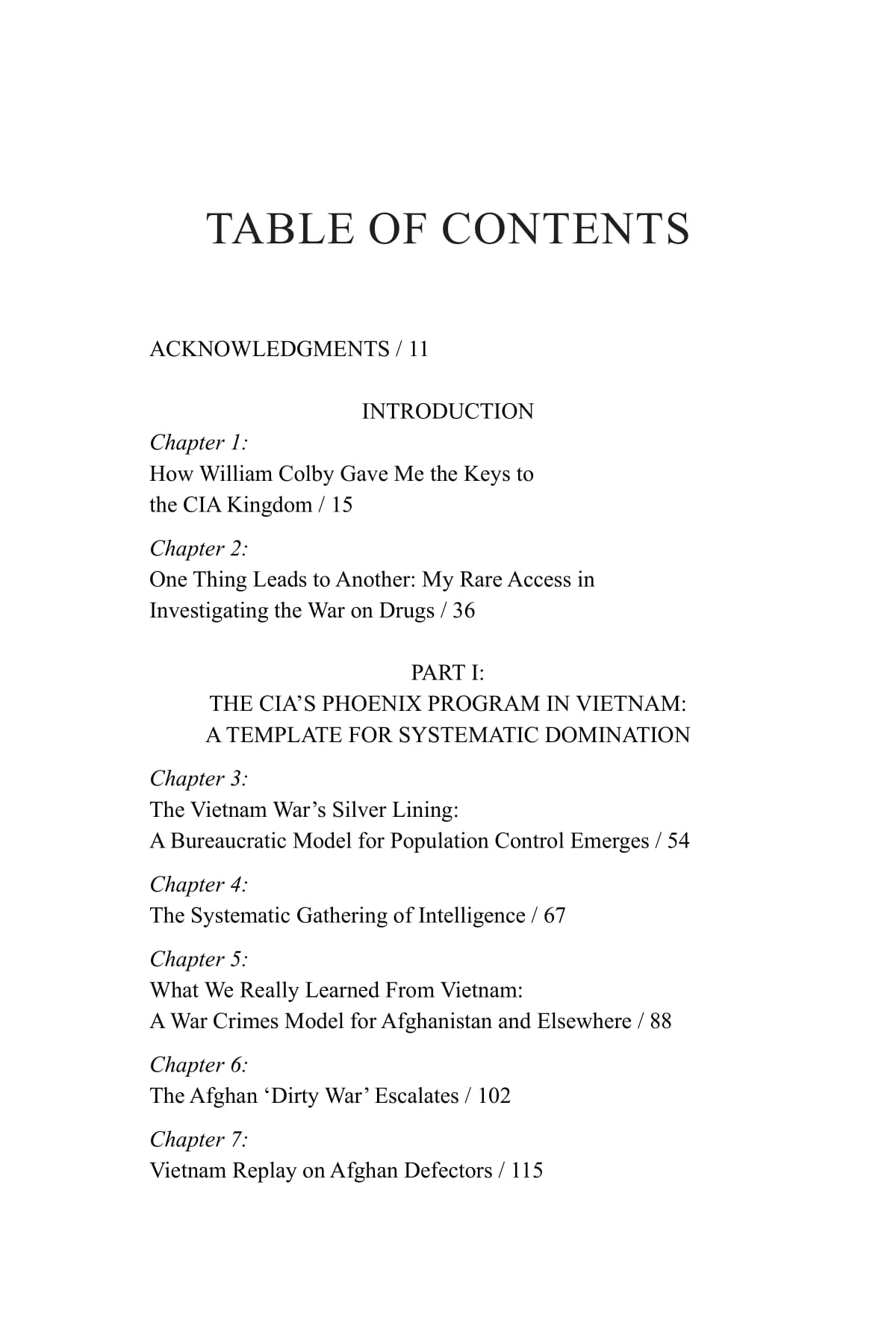 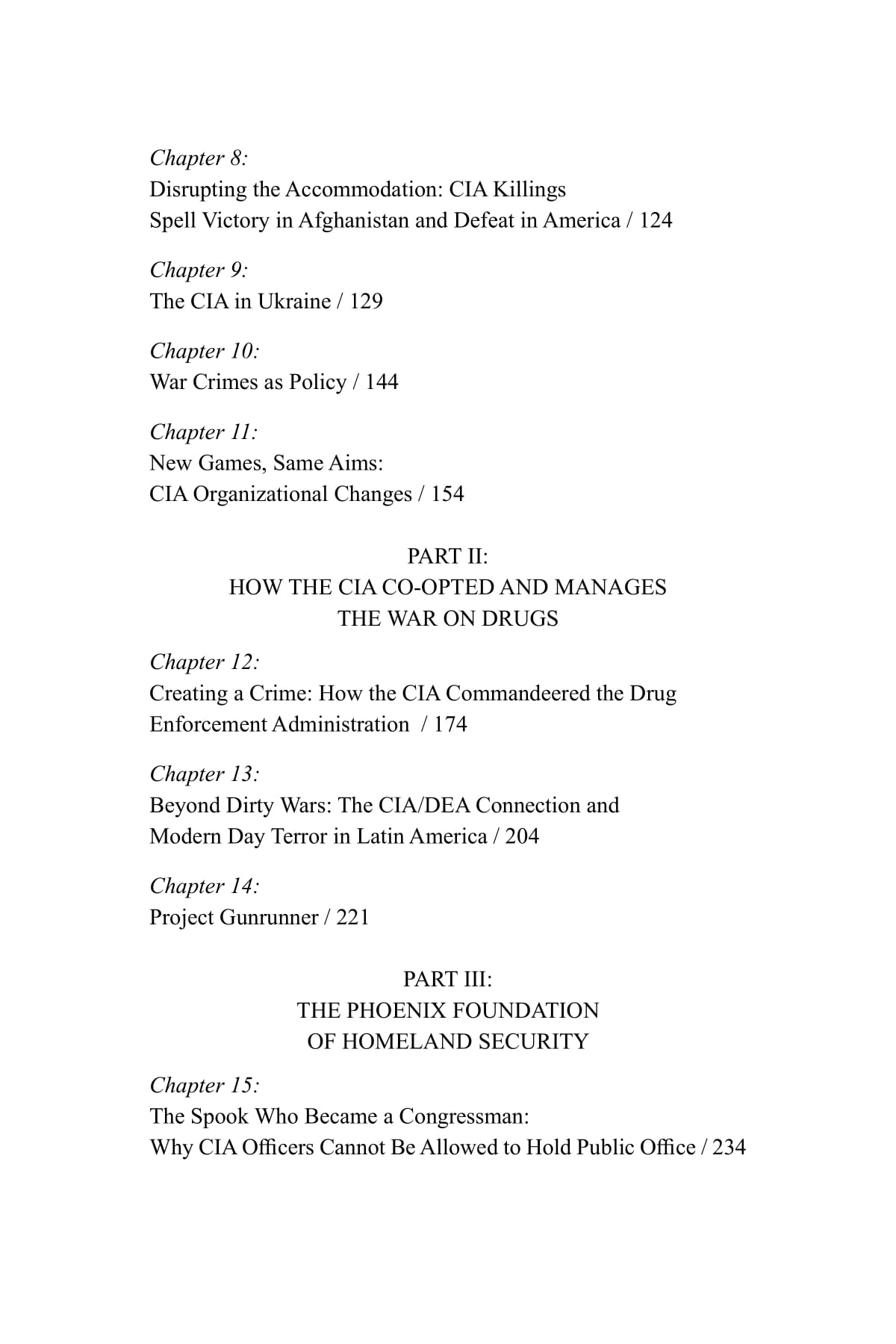 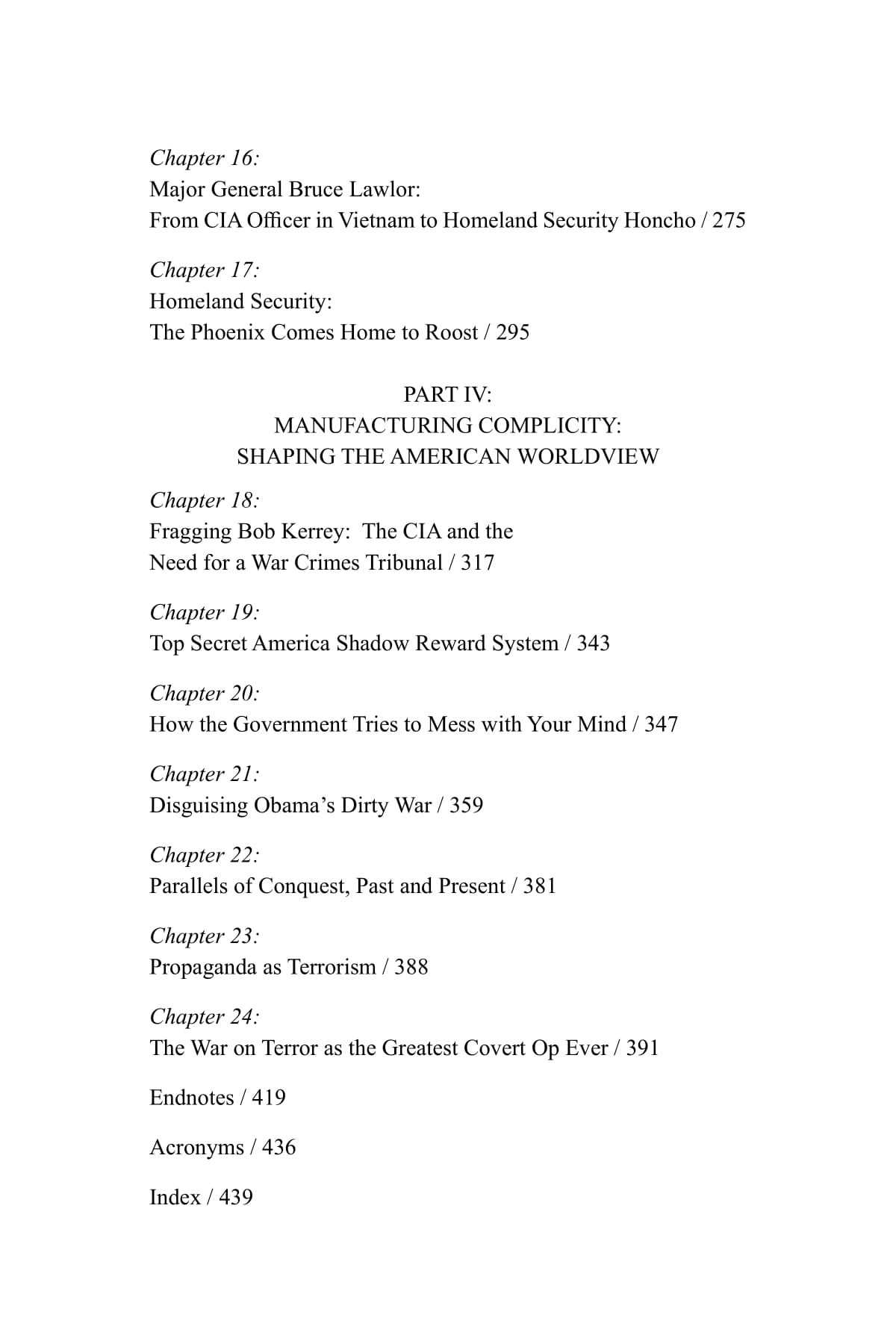 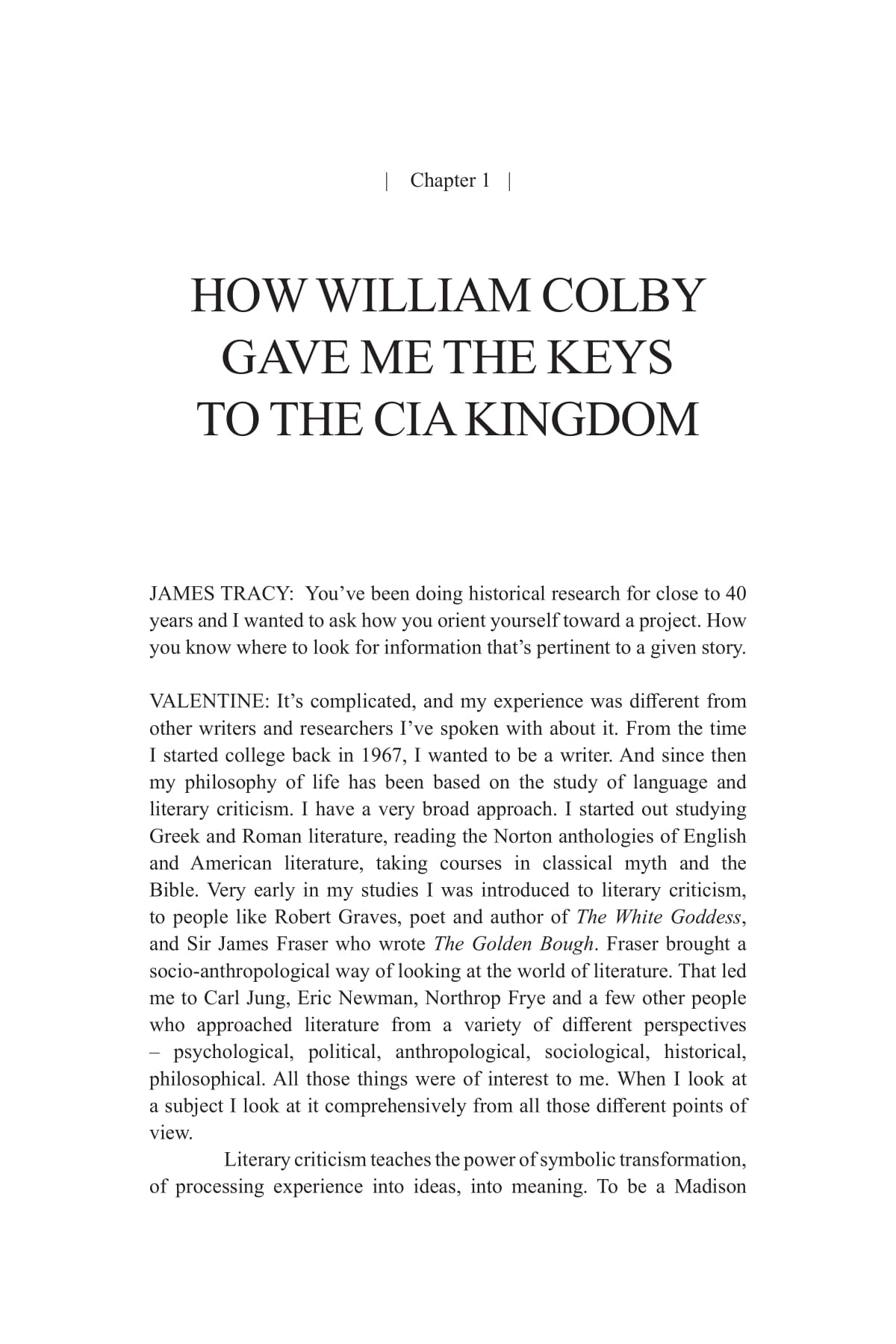 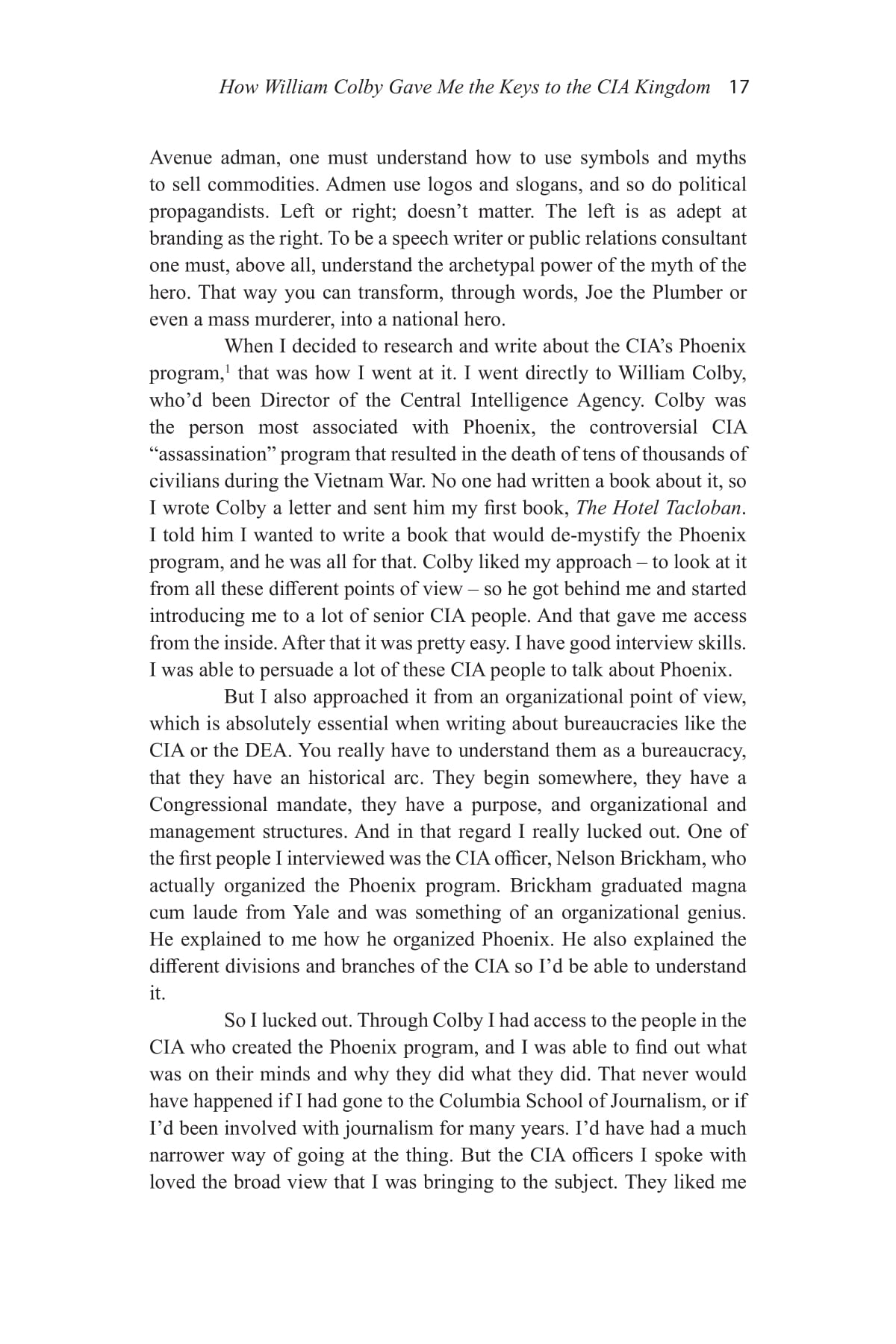 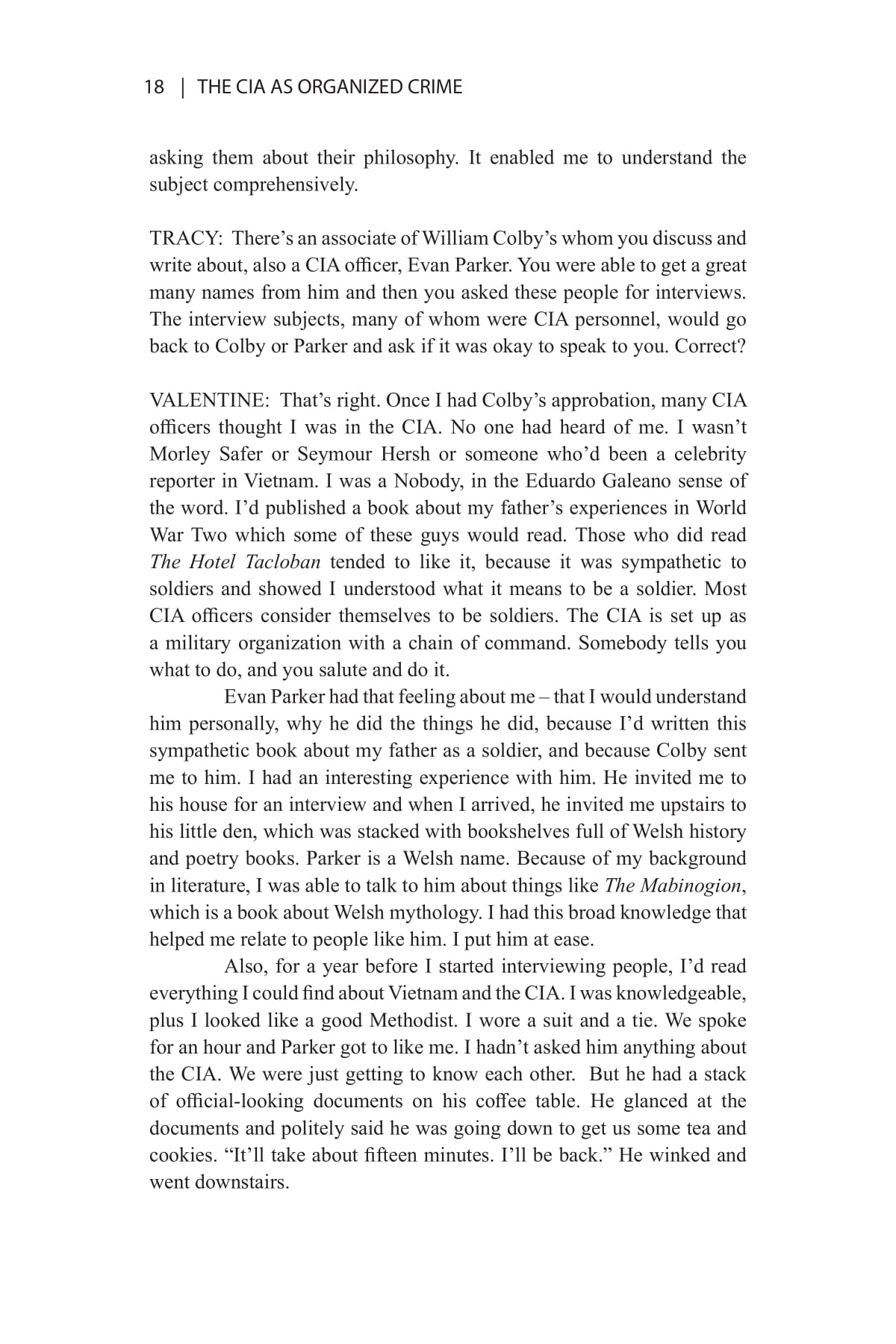 “Courageously takes us inside the CIA’s most shameful extralegal operations, exposing an intelligence service gone rogue. Douglas Valentine’s book is a public service.”  JOHN KIRIAKOU, author of The Reluctant Spy: My Secret Life in the CIA’s War on Terror

“Douglas Valentine writes books that rip the bloody veil off the criminal enterprise known as the US government. When he does this, he combines incredibly in-depth research, interviews and an inviting style of prose that exposes the dark truth about the US nation and its national security state. The CIA as Organized Crime continues that tradition and is an important and crucial text. ” RON JACOBS, Counterpunch

“Thanks to extensive interviews, he has an almost intimate feel for the operating mentality of the agency, why they operate the way they do—not only their bloody-minded ruthlessness or their rationalizations, important and interesting as these are—and why they are unbothered by such distinctions as Republican or Democratic presidents.” PAUL BUHLE, Portside

We live in a world increasingly fearful of terrorism and catalyzed by programmed events and developments whose sources are often unclear.  This book provides insight into the paradigmatic approaches evolved by CIA decades ago in Vietnam which remain operational practices today in Afghanistan, El Salvador, Iraq, Syria, Yemen and elsewhere.

Author of three books on CIA operations, Valentine’s research into CIA activities began when CIA Director William Colby gave him free access to interview CIA officials who had been involved in various aspects of the Phoenix program in South Vietnam. It was a permission Colby was to regret. The CIA would rescind it, making every effort to impede publication of The Phoenix Program, which documented the CIA’s elaborate system of population surveillance, control, entrapment, imprisonment, torture and assassination in Vietnam.

While researching Phoenix, Valentine learned that the CIA allowed opium and heroin to flow from its secret bases in Laos, to generals and politicians on its payroll in South Vietnam. His investigations into this illegal activity focused on the CIA’s relationship with the federal drugs agencies mandated by Congress to stop illegal drugs from entering the United States. Based on interviews with senior officials, Valentine wrote two subsequent books, The Strength of the Wolf and The Strength of the Pack, showing how the CIA infiltrated federal drug law enforcement agencies and commandeered their executive management, intelligence and foreign operations staffs in order to ensure that the flow of drugs continues unimpeded to traffickers and foreign officials in its employ.

Ultimately, portions of his research materials would be archived at the National Security Archive, Texas Tech University’s Vietnam Center, and John Jay College.

This book includes excerpts from the above titles along with subsequent articles and transcripts of interviews on a range of current topics, with a view to shedding light on the systemic dimensions of the CIA’s ongoing illegal and extra-legal activities. These terrorism and drug law enforcement articles and interviews illustrate how the CIA’s activities impact social and political movements abroad and in the United States.

A common theme is the CIA’s ability to deceive and propagandize the American public through its impenetrable government-sanctioned shield of official secrecy and plausible deniability.

Though investigated by the Church Committee in 1975, CIA praxis then continues to inform CIA praxis now. Valentine tracks its steady infiltration into practices targeting the last population to be subjected to the exigencies of the American empire: the American people.

10 reviews for THE CIA AS ORGANIZED CRIME