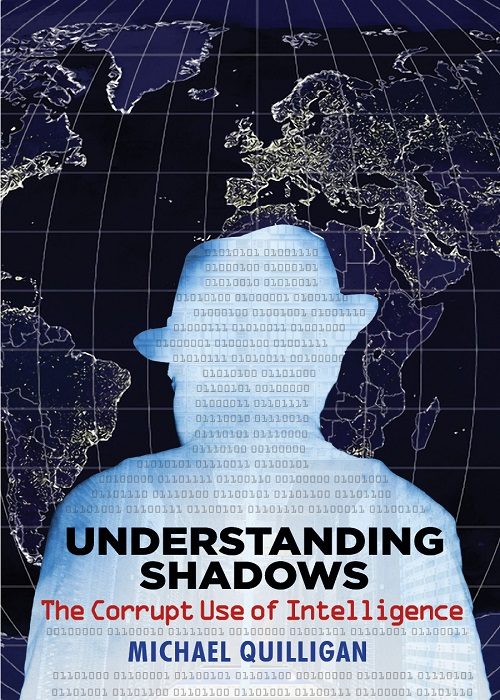 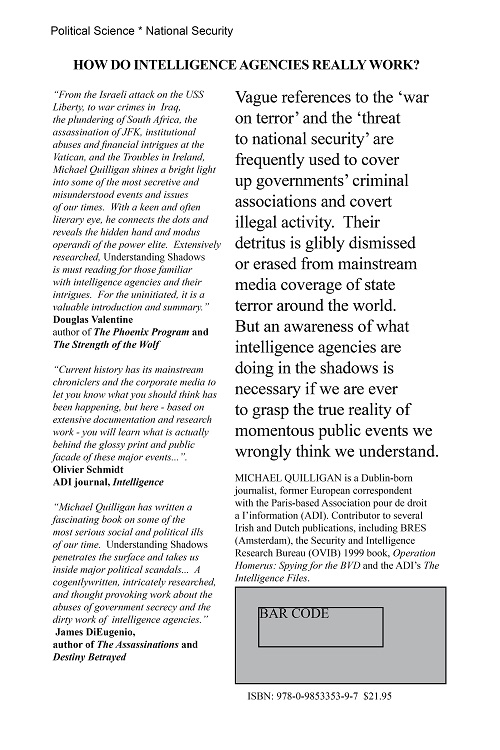 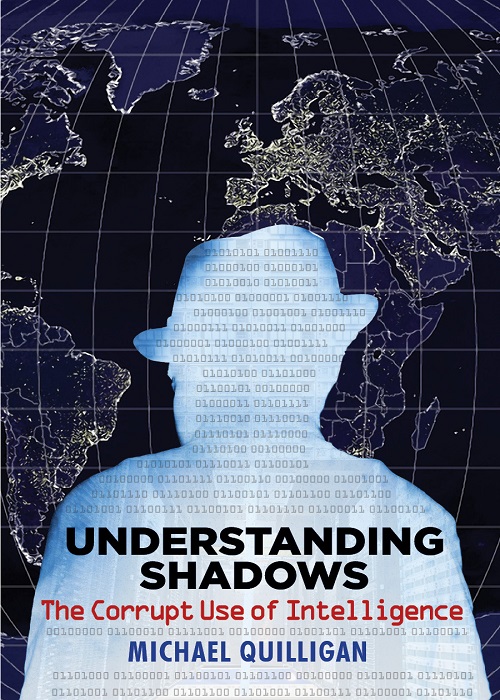 “Extensively researched, Understanding Shadows is must reading for those familiar with intelligence agencies and their intrigues.  For the uninitiated, it is a valuable introduction and summary.”—DOUGLAS VALENTINE

“A cogently written, intricately researched, and thought provoking work about the abuses of government secrecy and the dirty work of intelligence agencies.”—JAMES DiEUGENIO,  cofounder, Coalition on Political Assassinations

“Current history has its mainstream corporate media to let you know what you should think has been happening, but here – based on extensive documentation and research work – you will learn what is actually behind these major events.” —OLIVIER SCHMIDT, ADI journal, Intelligence, from the Foreword

Vague references to the ‘war on terror’ and the ‘threat to national security’ are frequently used by venal politicians to cover-up criminal associations and covert illegal activity, ranging from money-laundering, narcotics trafficking, abduction and murder to the wholesale slaughter of non-combatant civilians.  Their detritus is glibly dismissed or erased from mainstream media coverage of state terror around the world. But an awareness of what intelligence agencies are doing in the shadows is necessary if we are ever to grasp the true reality of momentous public events we wrongly think we understand.

The issues in Understanding Shadows include how the bloody and brutal end of ‘democratic Islam’ in Algeria has facilitated the “fear and loathing” which has dominated the West’s security agenda since 9/11.

The arrogance and political hubris of former British PM, Tony Blair, and the corrupt use of intelligence, took the UK to war in Iraq, and was a factor in the lonely death of WMD specialist, Dr David Kelly, while ‘off stage’ Israel continued its colonization of occupied Arab lands and upgraded its collective punishment of Gaza.

There is an account of the curious journey the CIA’s USSR ‘dangle’, Lee Harvey Oswald, made across Cold War Europe in June 1962, while the end of the apartheid regime in South Africa provided an opportunity for self-serving, power-hungry ANC politicians to ‘feather their own nests’ at the expense of the impoverished majority of their fellow citizens – a depressing example of a righteous liberation struggle turned sour.

Meanwhile, the ‘long war’ continued. Operation ‘Banner’ was the code name given to the longest British Army deployment since 1945. In the North of Ireland, where the 36-year period of active service is referred to as the ‘Troubles’, clandestine military units, including the murderous Force Research Unit, waged a ‘dirty war’ against the Provisional IRA in particular, and the nationalist community in general. An estimated 763 British soldiers died and over 6,000 were injured during the ‘Troubles’ that ended in a ‘military stalemate’ according to an official British Ministry of Defence report.

The 1998 Good Friday Agreement, brokered by the successive US, UK and Irish administrations after 12-years of often ‘torturous’ negotiations, has been largely successful in reconciling communities, and has been cited as a possible template for peace in the Middle East.

An awareness of the ‘back stories’ to these issues is an important factor for the understanding of shadows.

5 reviews for UNDERSTANDING SHADOWS The Corrupt Use of Intelligence