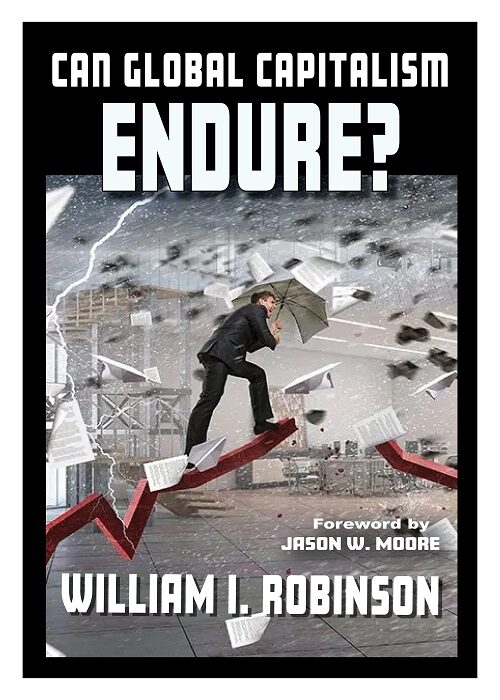 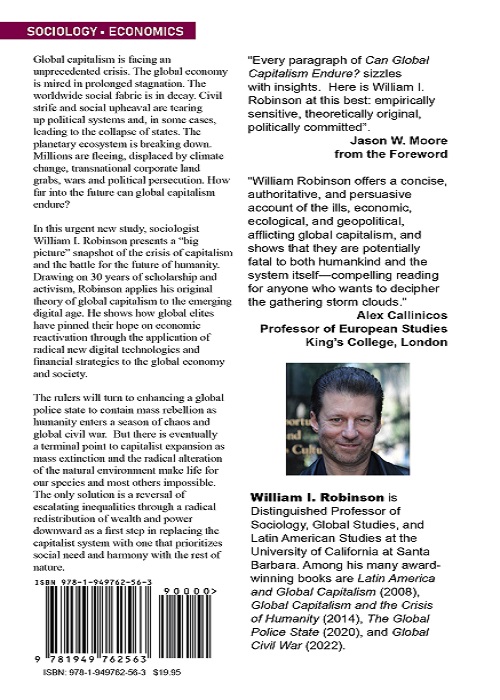 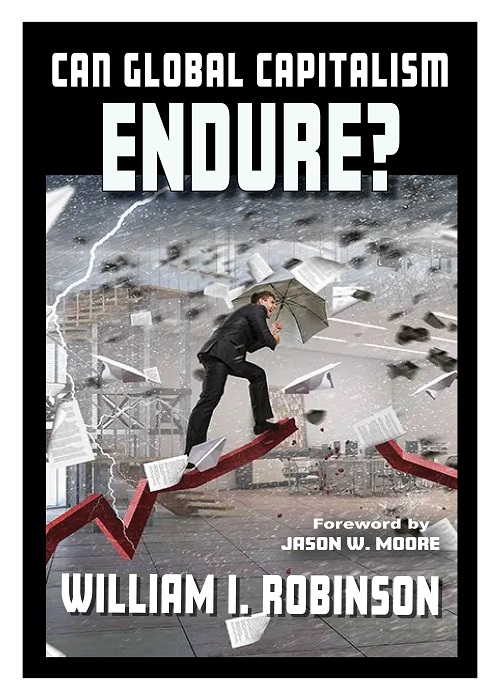 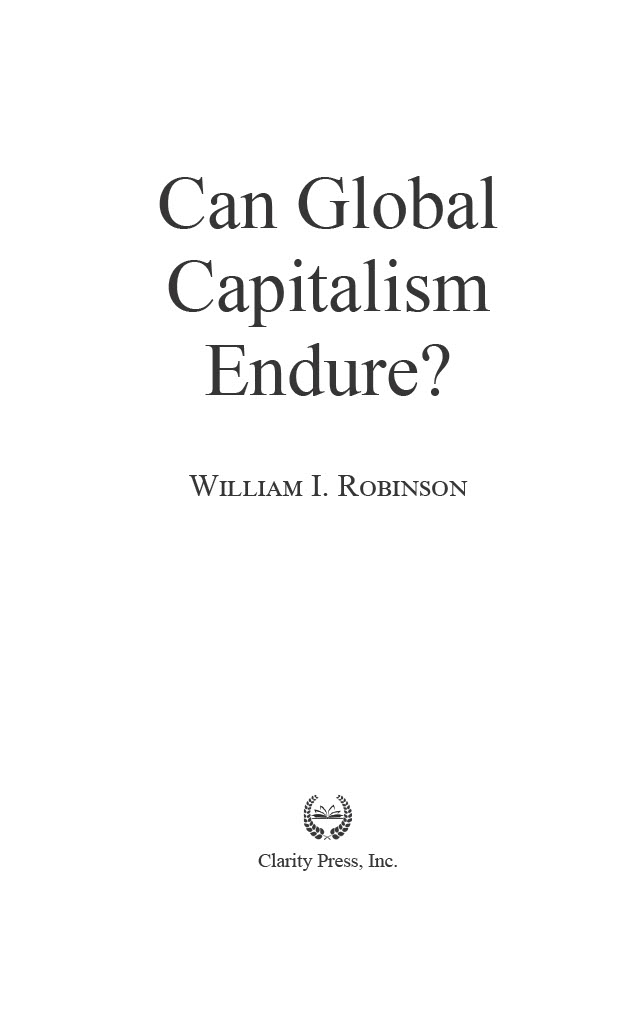 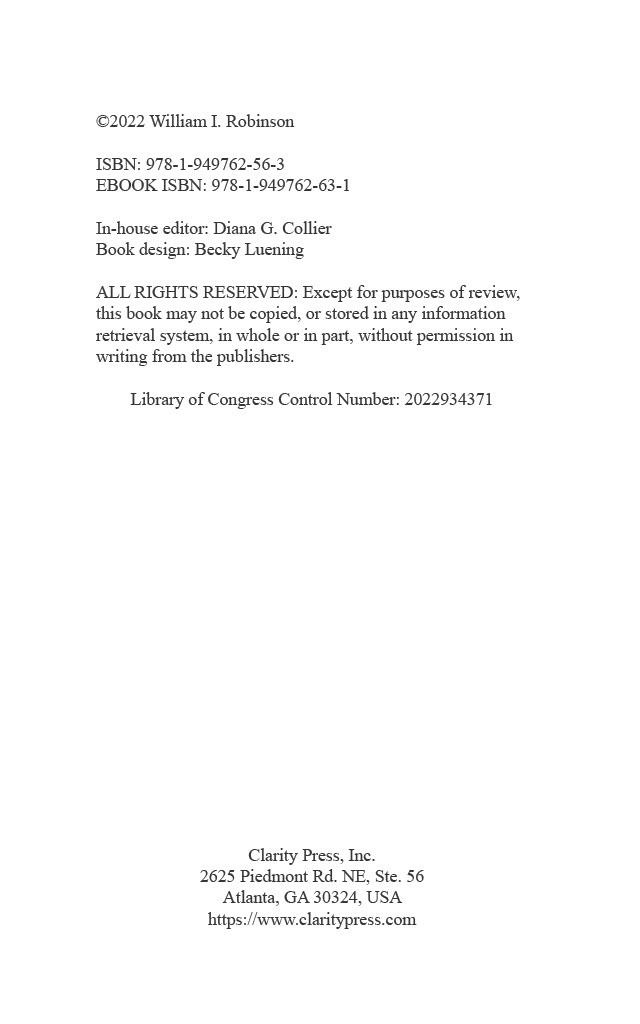 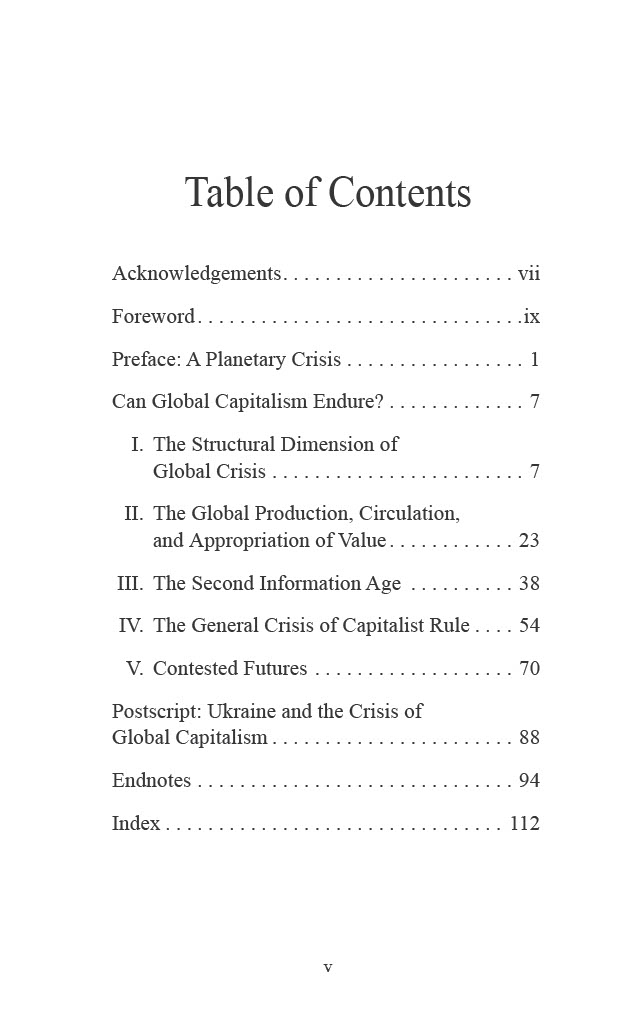 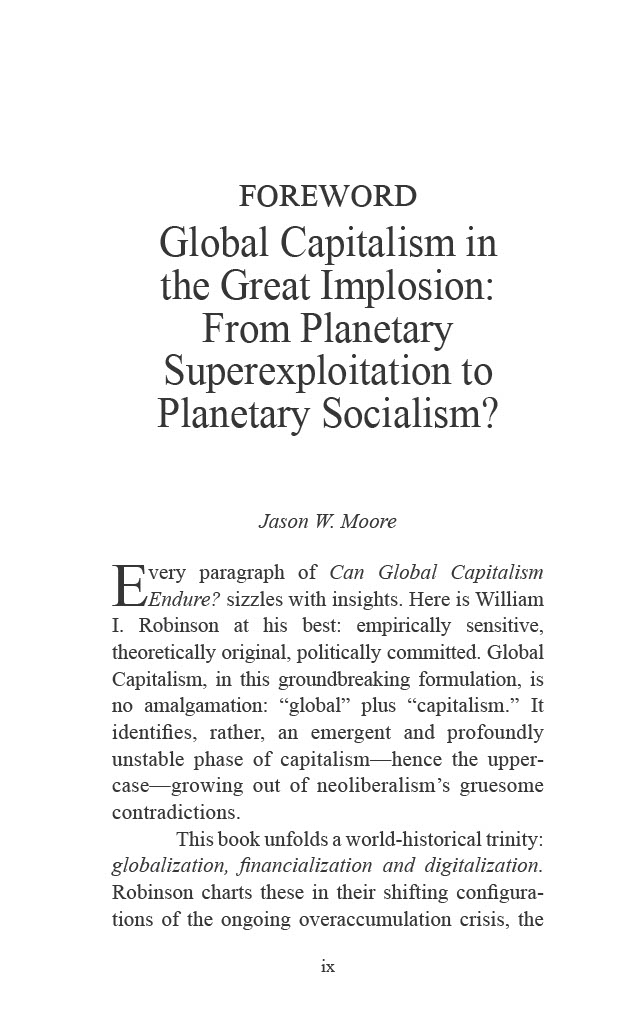 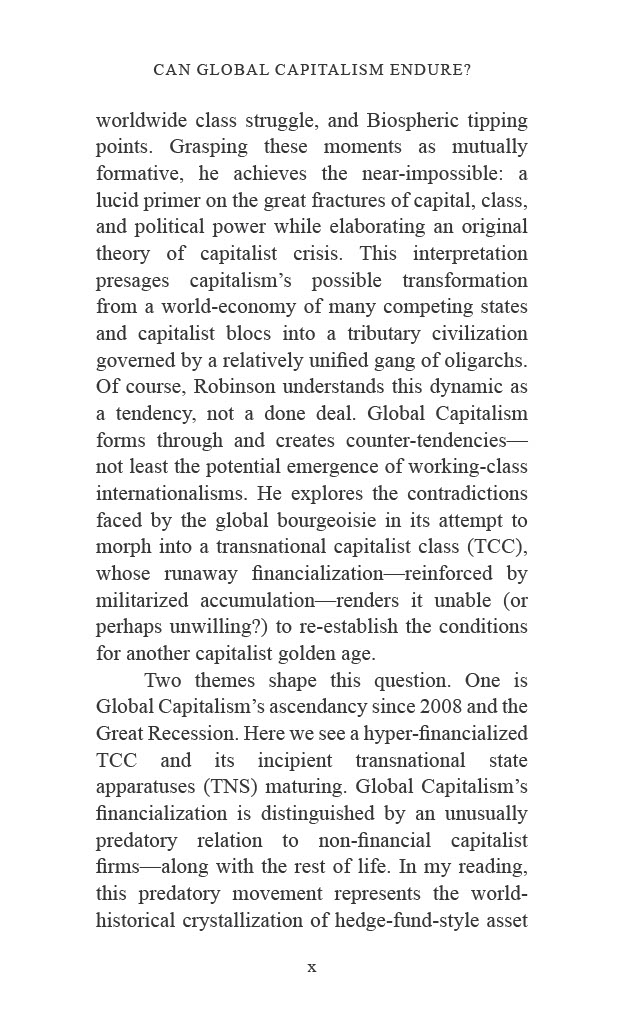 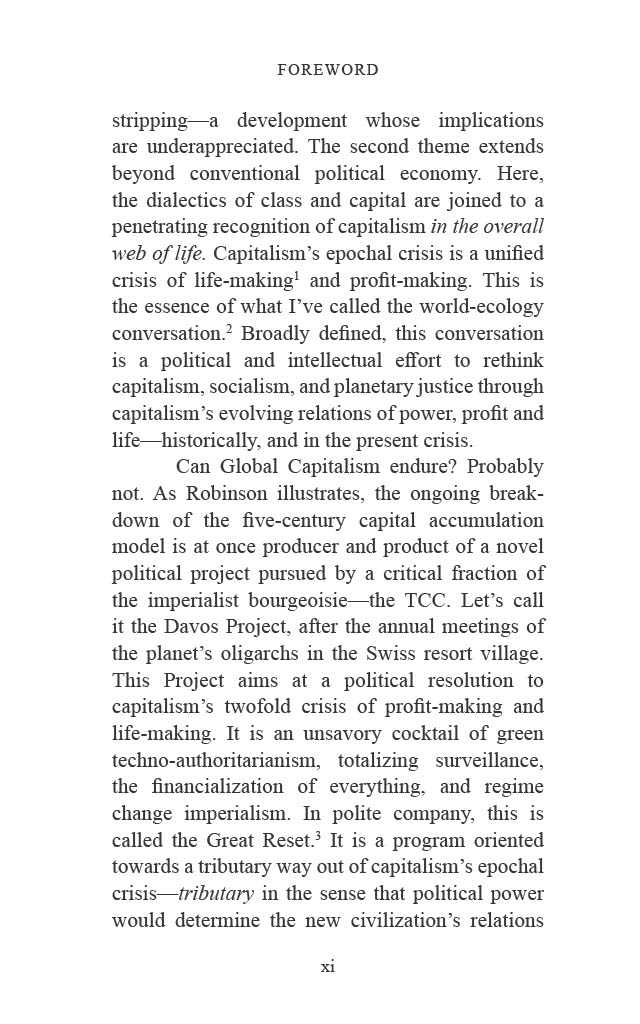 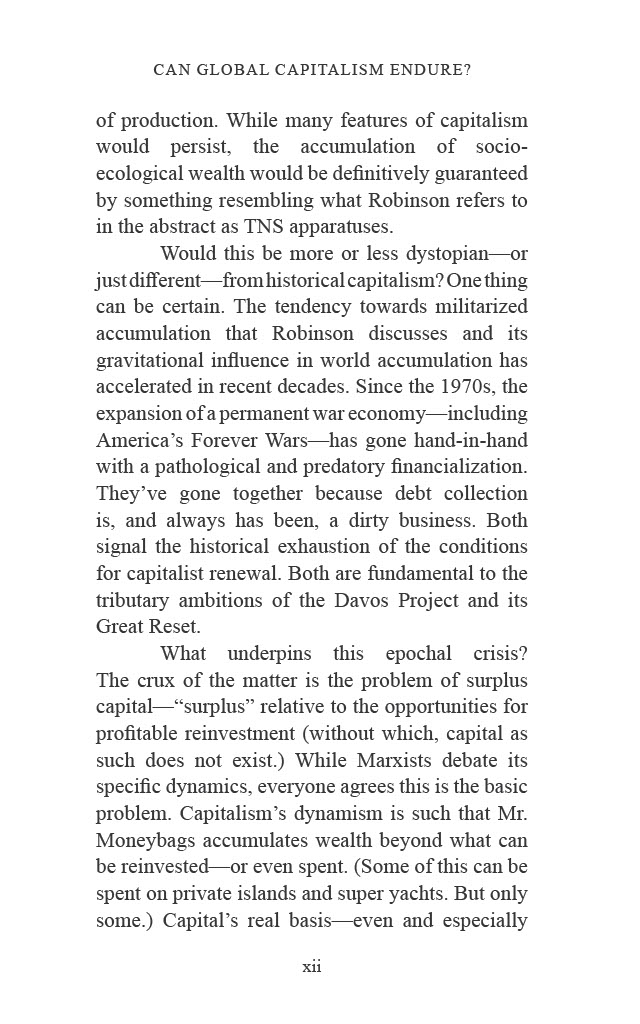 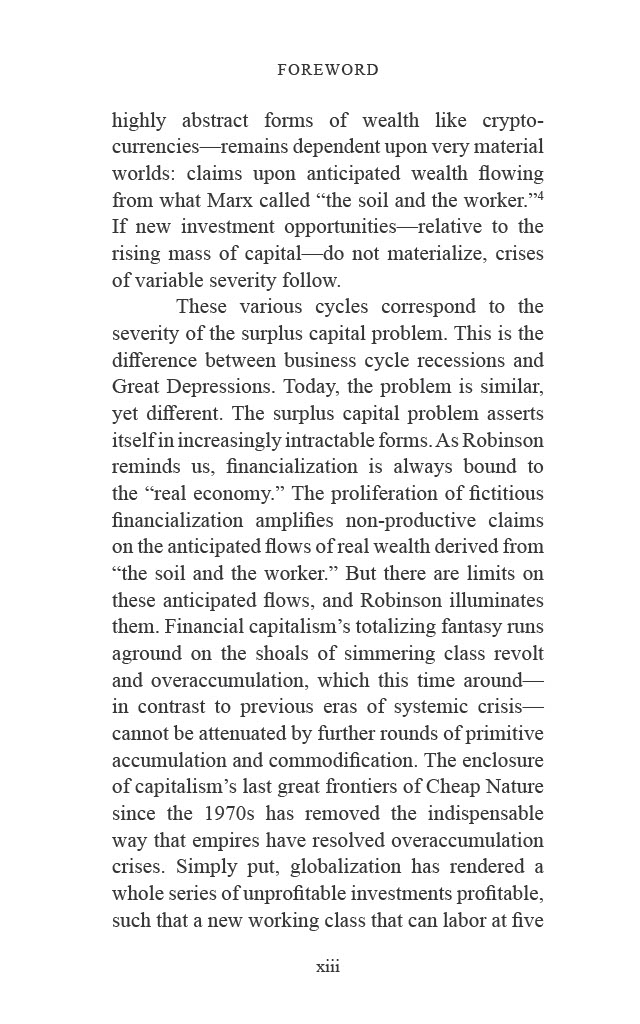 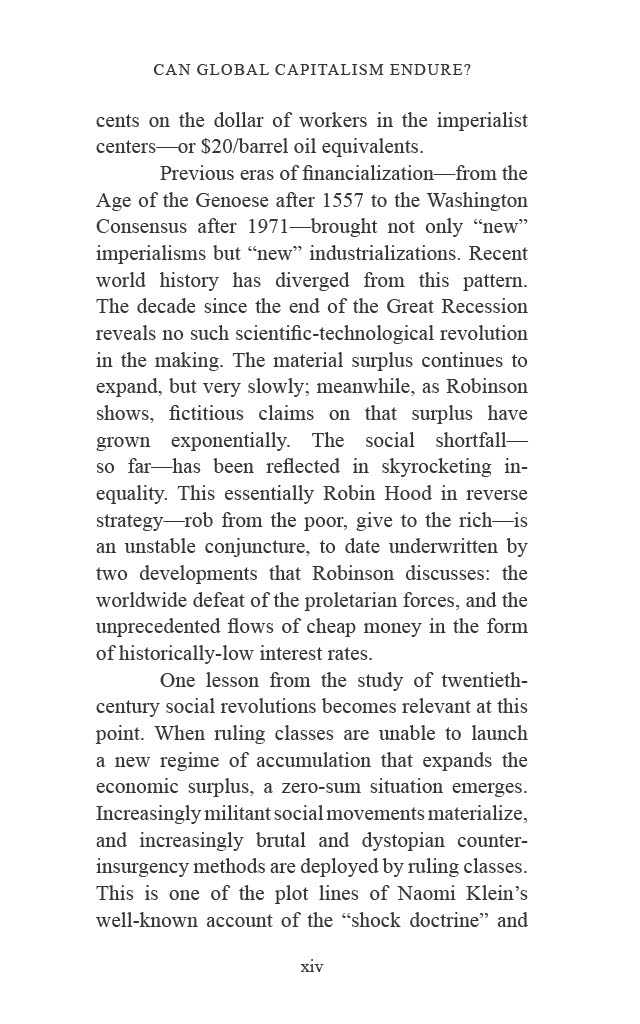 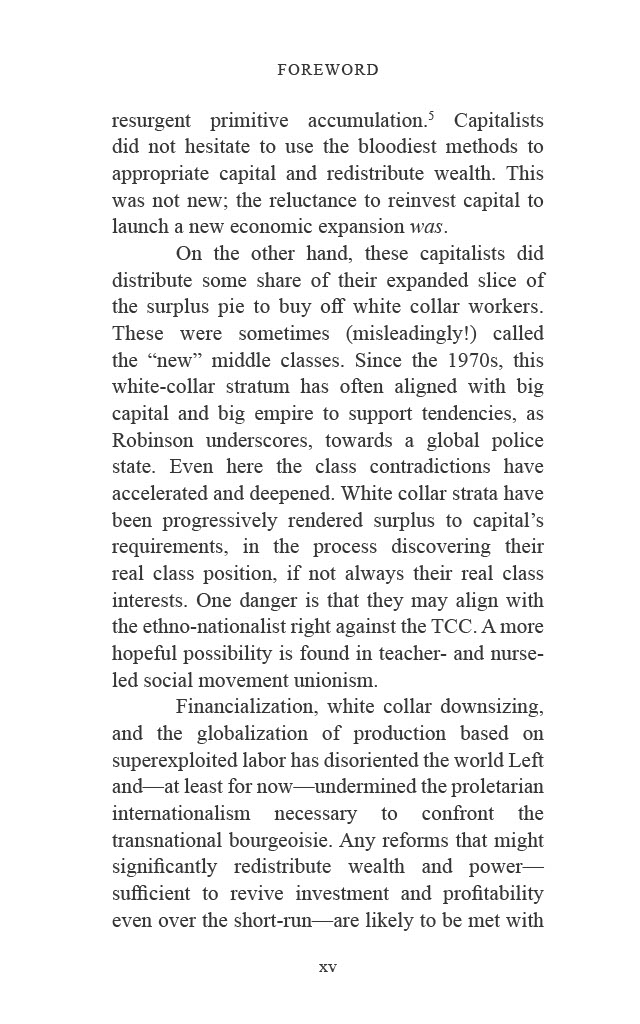 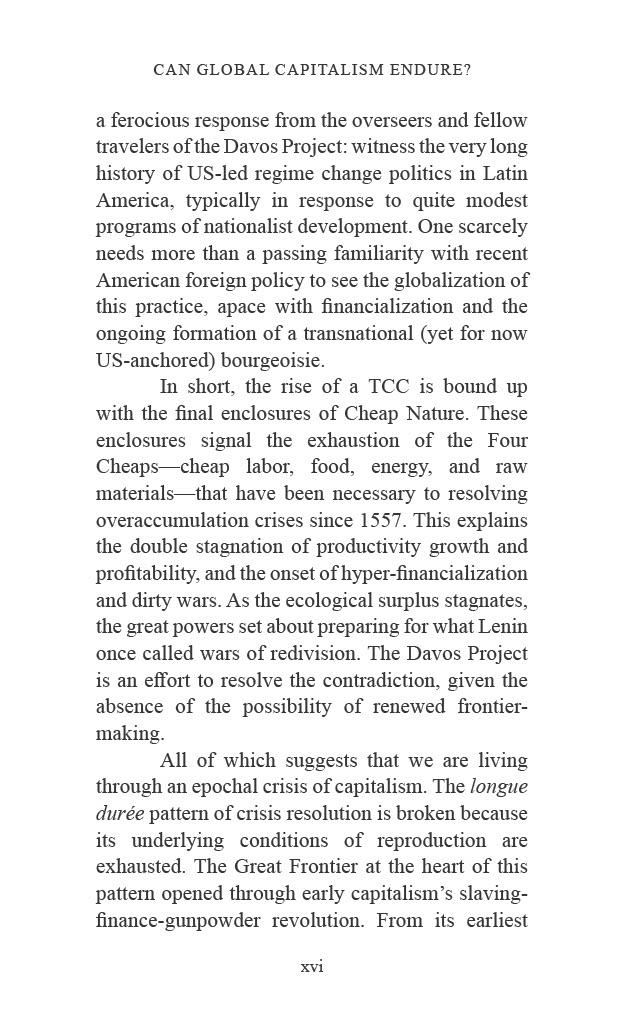 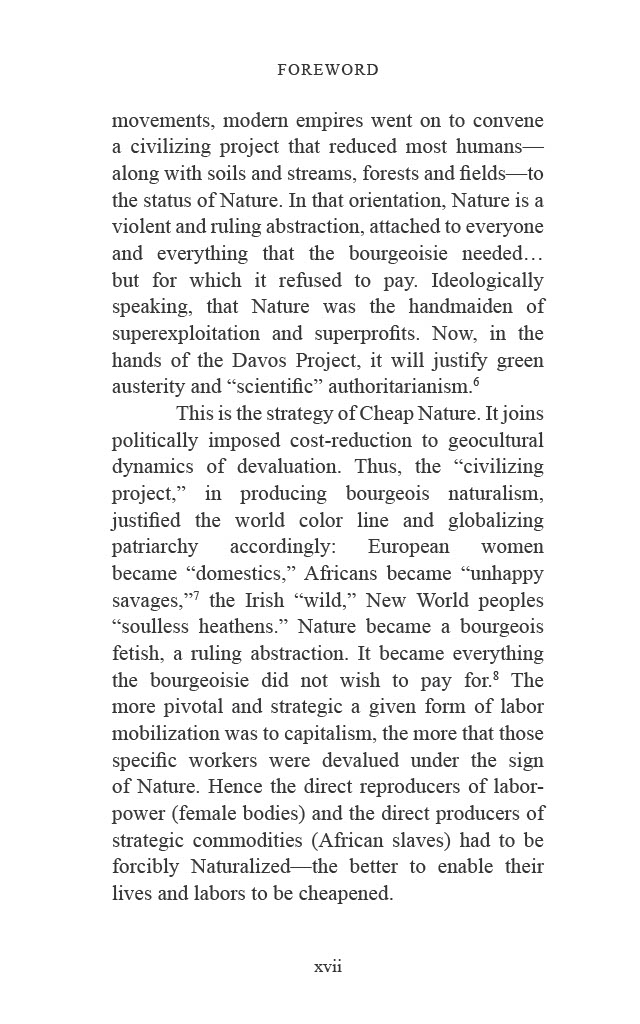 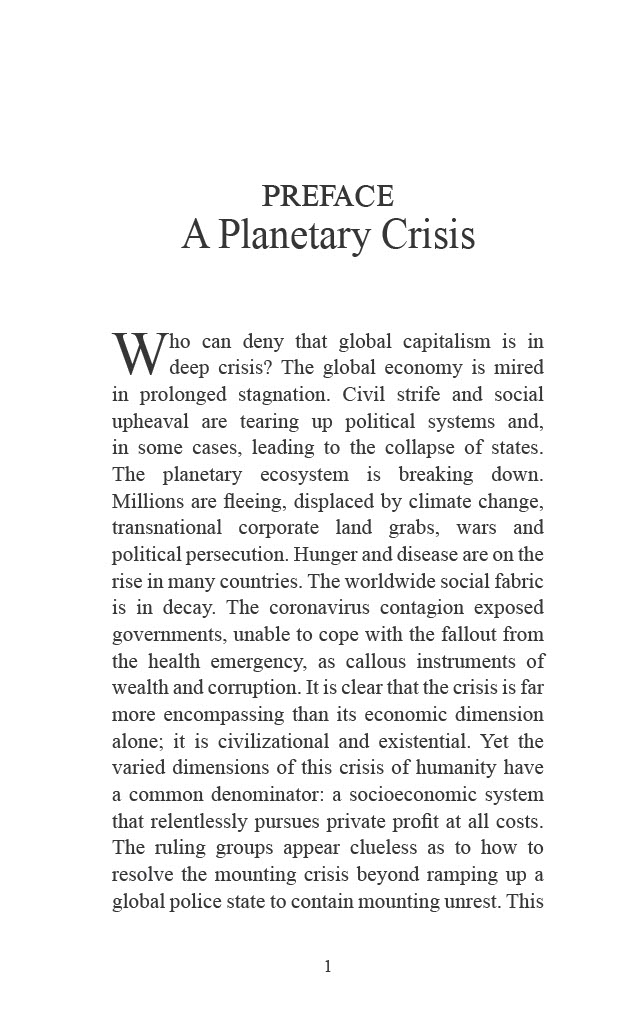 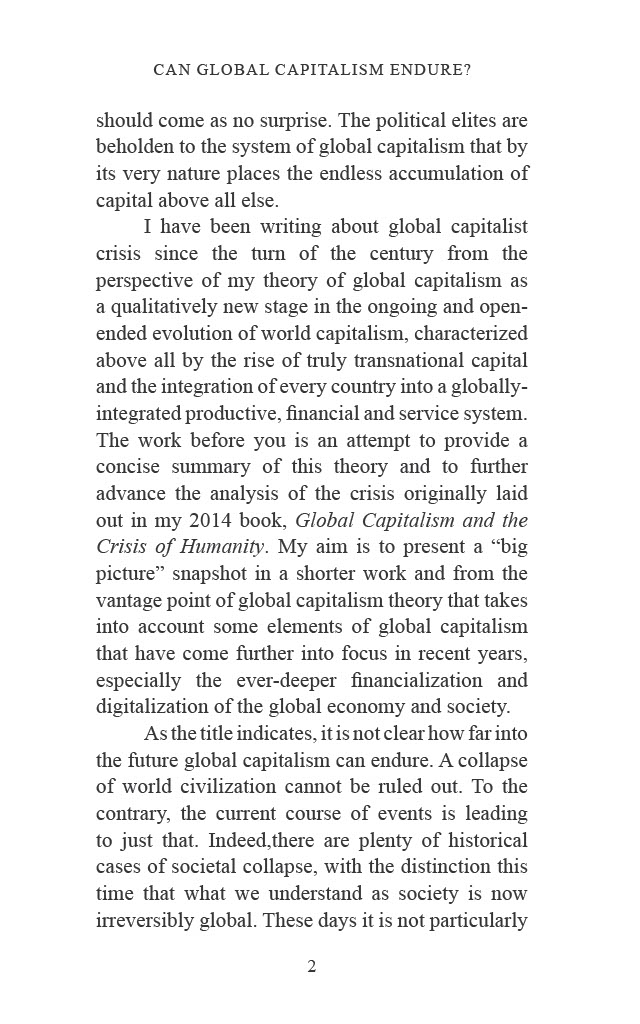 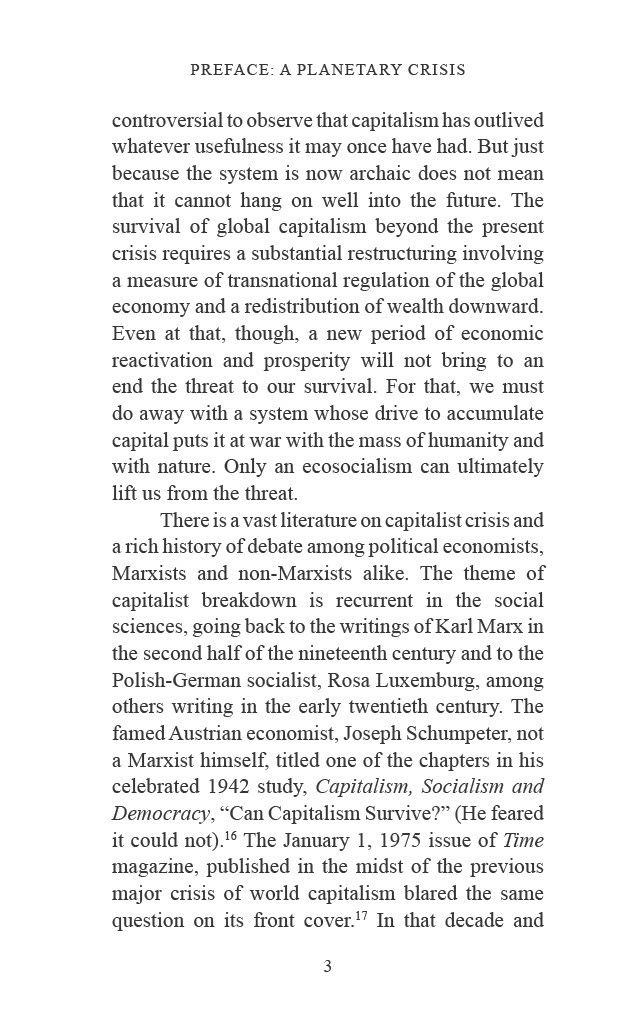 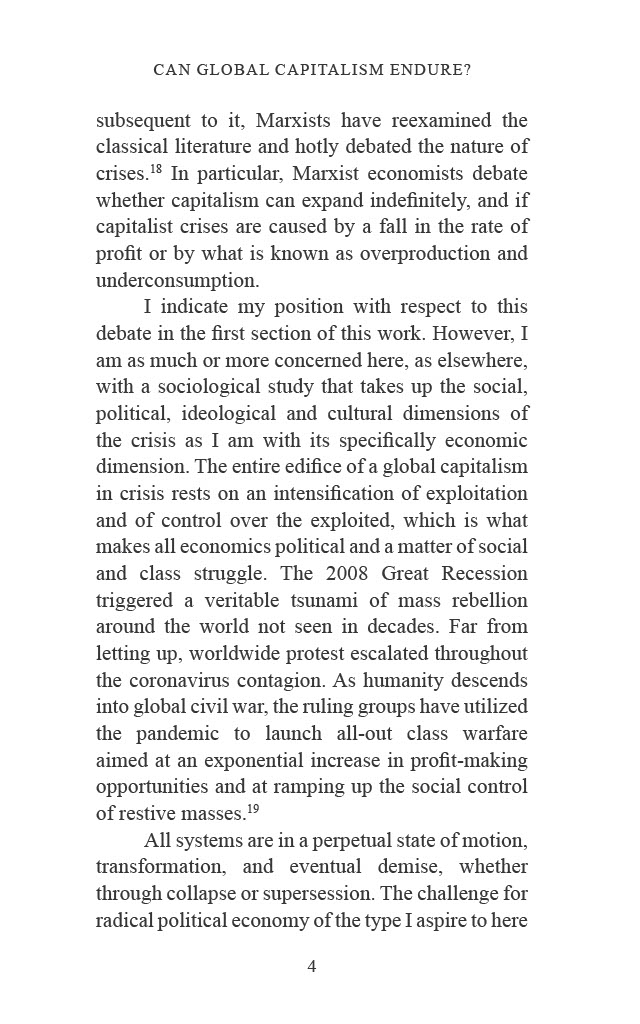 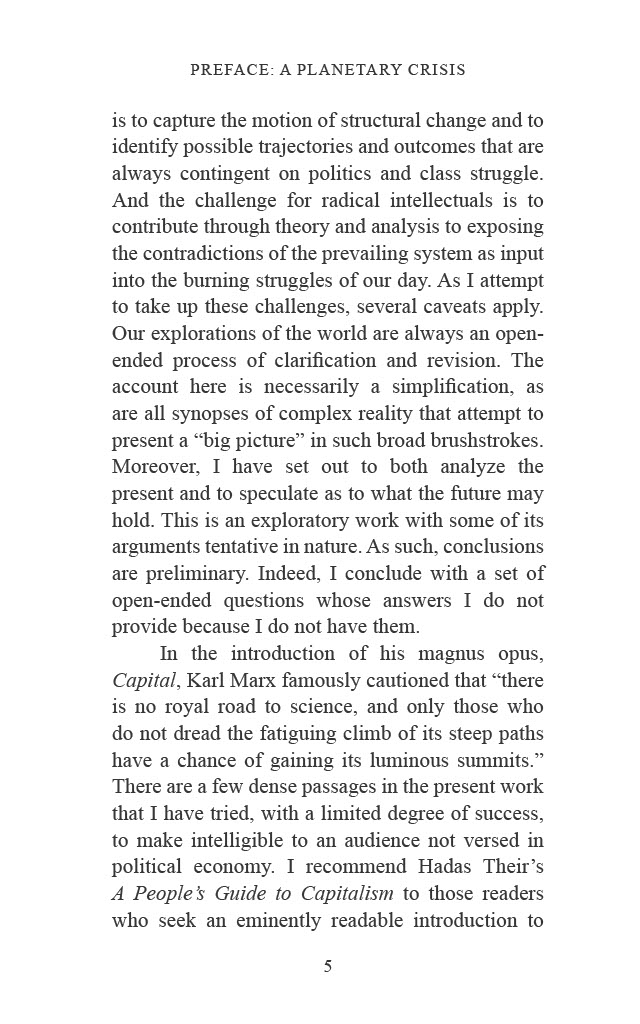 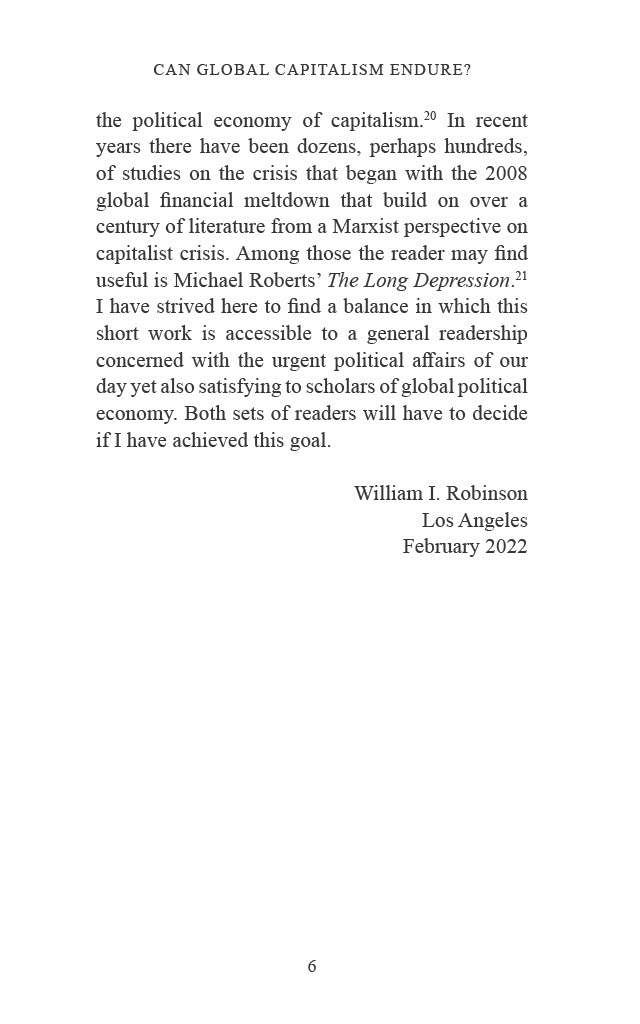 WILL THE GLOBAL ELITES SEEK TO SAVE THE SYSTEM WHILE ABANDONING THE MASSES?

Global capitalism is facing an unprecedented crisis. The global economy is mired in prolonged stagnation. The worldwide social fabric is in decay. Civil strife and social upheaval are tearing up political systems and, in some cases, leading to the collapse of states. The planetary ecosystem is breaking down. Millions are fleeing, displaced by climate change, transnational corporate land grabs, wars and political persecution. How far into the future can global capitalism endure?

In this urgent new study, sociologist William I. Robinson presents a “big picture” snapshot of the crisis of capitalism and the battle for the future of humanity. Drawing on 30 years of scholarship and activism, Robinson applies his original theory of global capitalism to the emerging digital age. He shows how global elites have pinned their hope on economic reactivation through the application of radical new digital technologies and financial strategies to the global economy and society. The rulers will turn to enhancing a global police state to contain mass rebellion as humanity enters a season of chaos and global civil war.

The capitalist class and privileged strata of humanity may be able to survive collapse for decades to come even as a majority of humanity faces desperate struggles for survival that lead many to perish in the coming years. But there is eventually a terminal point to capitalist expansion as mass extinction and the radical alteration of the natural environment make life for our species and most others impossible. The only solution is a reversal of escalating inequalities through a radical redistribution of wealth and power downward as a first step in replacing the capitalist system, with its relentless pursuit of private profit at all cost, by an ecosocialism that prioritizes social need and harmony with the rest of nature. Theoretically sophisticated and engaging, this concise study will be satisfying to scholars yet accessible to a broader public concerned with the urgent political affairs of our day.

“Every paragraph of Can Global Capitalism Endure? sizzles with insights. Here is William I. Robinson at his best: empirically sensitive, theoretically original, politically committed”. JASON W. MOORE from the Foreword

“William Robinson offers a concise, authoritative, and persuasive account of the ills, economic, ecological, and geopolitical, afflicting global capitalism, and shows that they are potentially fatal to both humankind and the system itself – compelling reading for anyone who wants to decipher the gathering storm clouds.”   ALEX CALLINICOS, Professor of European Studies, King’s College, London

“Few scholars are better qualified than William I. Robinson to summarize the Marxist economic critique and to apply it to the current terminal crisis of the capitalist system.”  KEES VAN DER PIJL, States of Emergency:  Keeping the Global Population in Check

Global capitalism is facing its most severe crisis in decades. If the history of capitalism is one of never-ending transformation, crises often mark before-and-after turning points. The period from 2008 into the third decade of the twenty-first century has been one long protracted crisis that, far from being resolved, has been aggravated by the coronavirus pandemic. This crisis is as much economic (chronic stagnation) as it is political (state legitimacy) as capitalist hegemony breaks down. But the crisis is also existential because of the threat of ecological collapse as well as the renewed threat of nuclear war, to which we must add the danger of future pandemics that may involve much deadlier microbes than coronaviruses.

Can global capitalism endure? Indeed, will humanity survive? These are, to be sure, two distinct questions. It is entirely possible that the system endures even as a majority of humanity faces desperate struggles for survival that will lead many to perish in the coming years and decades.

The agents of global capitalism are presently attempting to purchase a new lease on life for the system through digital restructuring and regulatory and redistributive reform that some among the global elite are advocating in the face of mass revolt from below. A new round of digital-driven restructuring may turbo-charge the economy sufficiently to usher in a period of rising profits and prosperity for the system as a whole, even as billions of people are abandoned.

It is difficult to see how global capitalism can endure in the long run without a much more profound overhaul than is currently on the horizon, involving a reversal of escalating inequalities through a radical downward redistribution of wealth and power. Yet even then, global capitalism will still run up against its inherent contradictions as well as the finite limits of the planetary ecosystem.

Highly scholarly yet specifically crafted to be accessible to an engaged public, this work addresses the present structural crises, the second information age, the global revolt, and what lies ahead: a new epoch of reform and stability, a revolutionary rupture with capitalism, a worldwide fascist dictatorship, or a collapse of global civilization.

Humanity has entered a period of systemic chaos and global civil war and if it is to survive, must overthrow global capitalism and replace it with a form of ecosocialism. The battle over alternative futures is now underway

William I. Robinson is Distinguished Professor of Sociology, Global Studies, and Latin American Studies at the University of California at Santa Barbara. Among his many award-winning books are Latin America and Global Capitalism (2008), Global Capitalism and the Crisis of Humanity (2014), The Global Police State (2020), and Global Civil War (2021). He has written hundreds of articles, commentaries, and book chapters on politics, economics, world affairs, and globalization, and has worked for many years with social justice movements in Latin America and the United States. His Facebook blog is at https://www.facebook.com/williamirobinsonsociologist.

1 review for CAN GLOBAL CAPITALISM ENDURE?

STATES OF EMERGENCY: Keeping the Global Population in Check