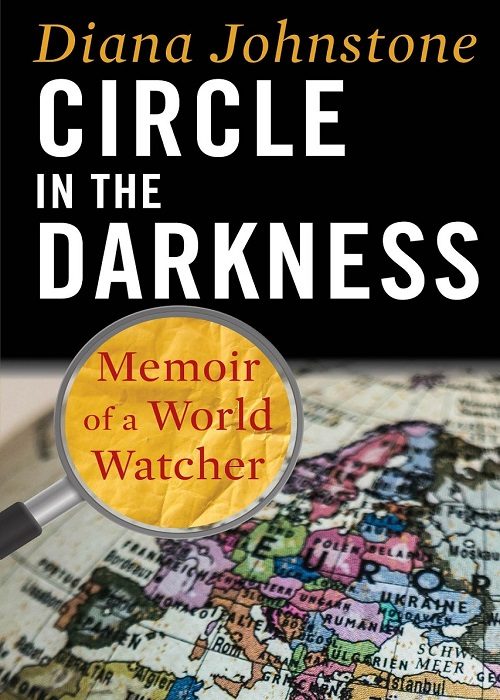 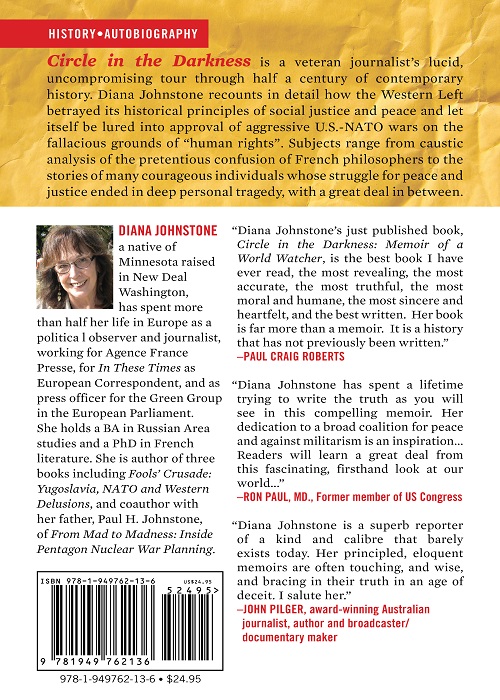 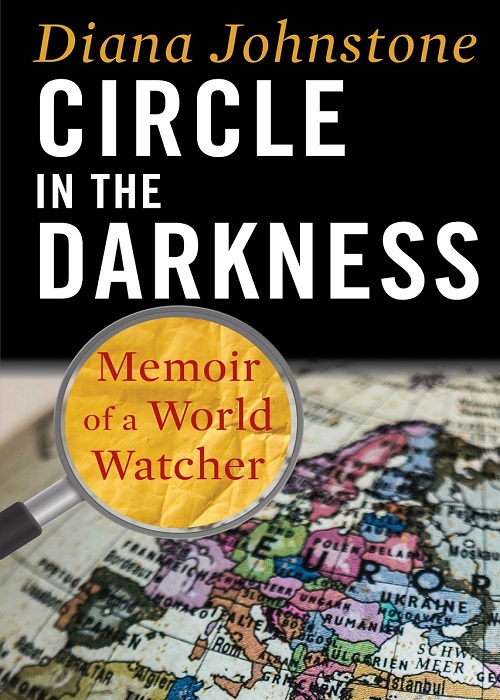 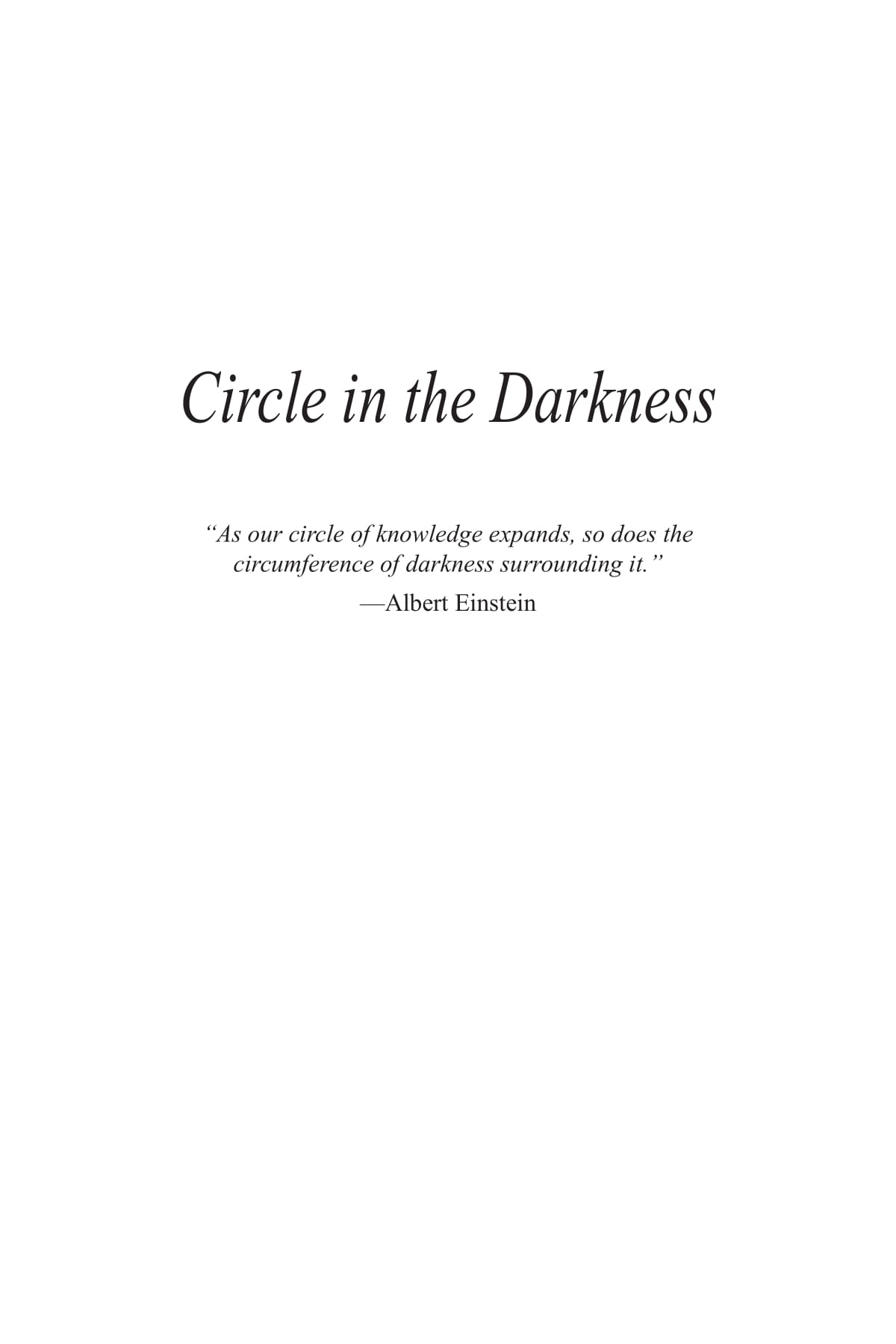 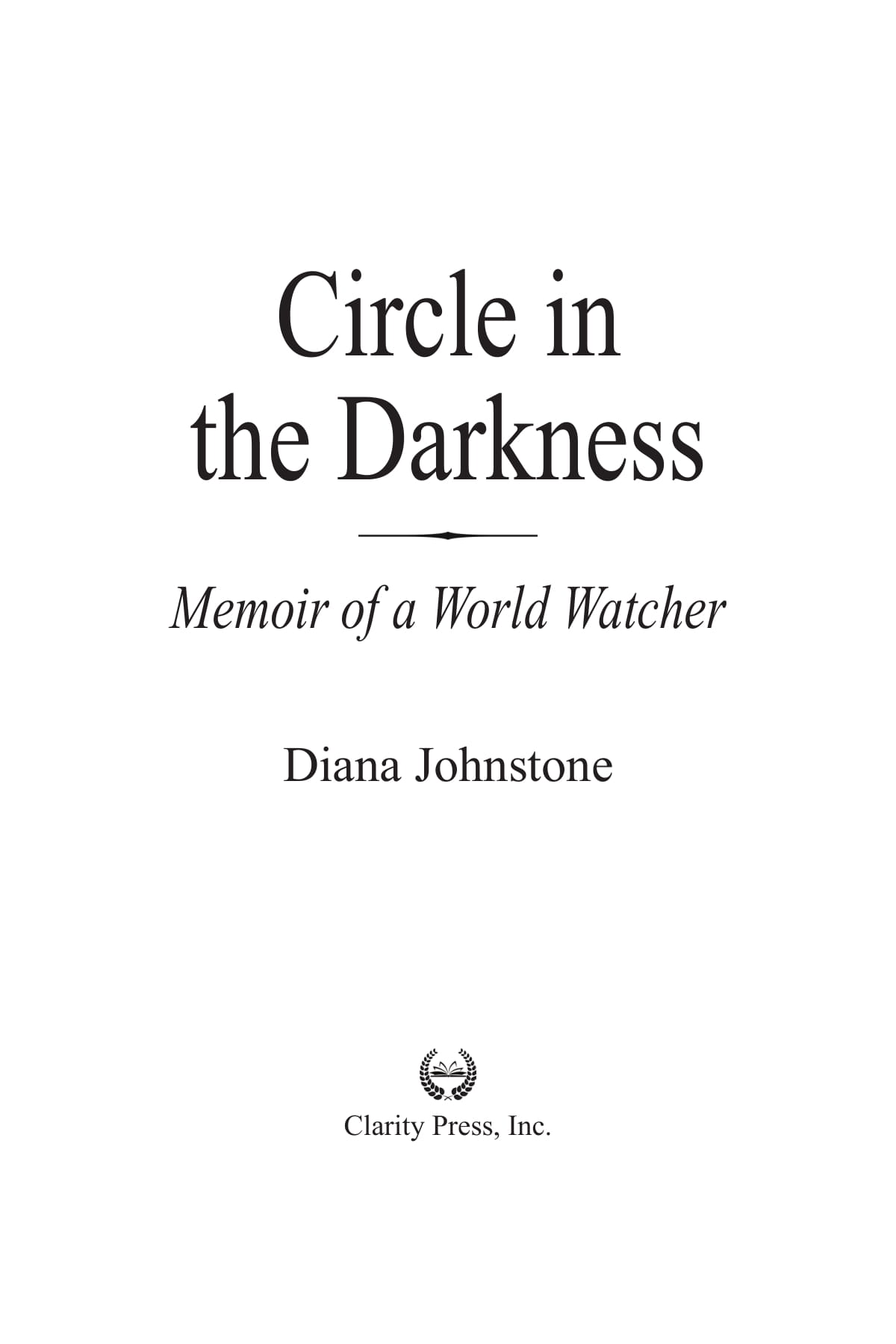 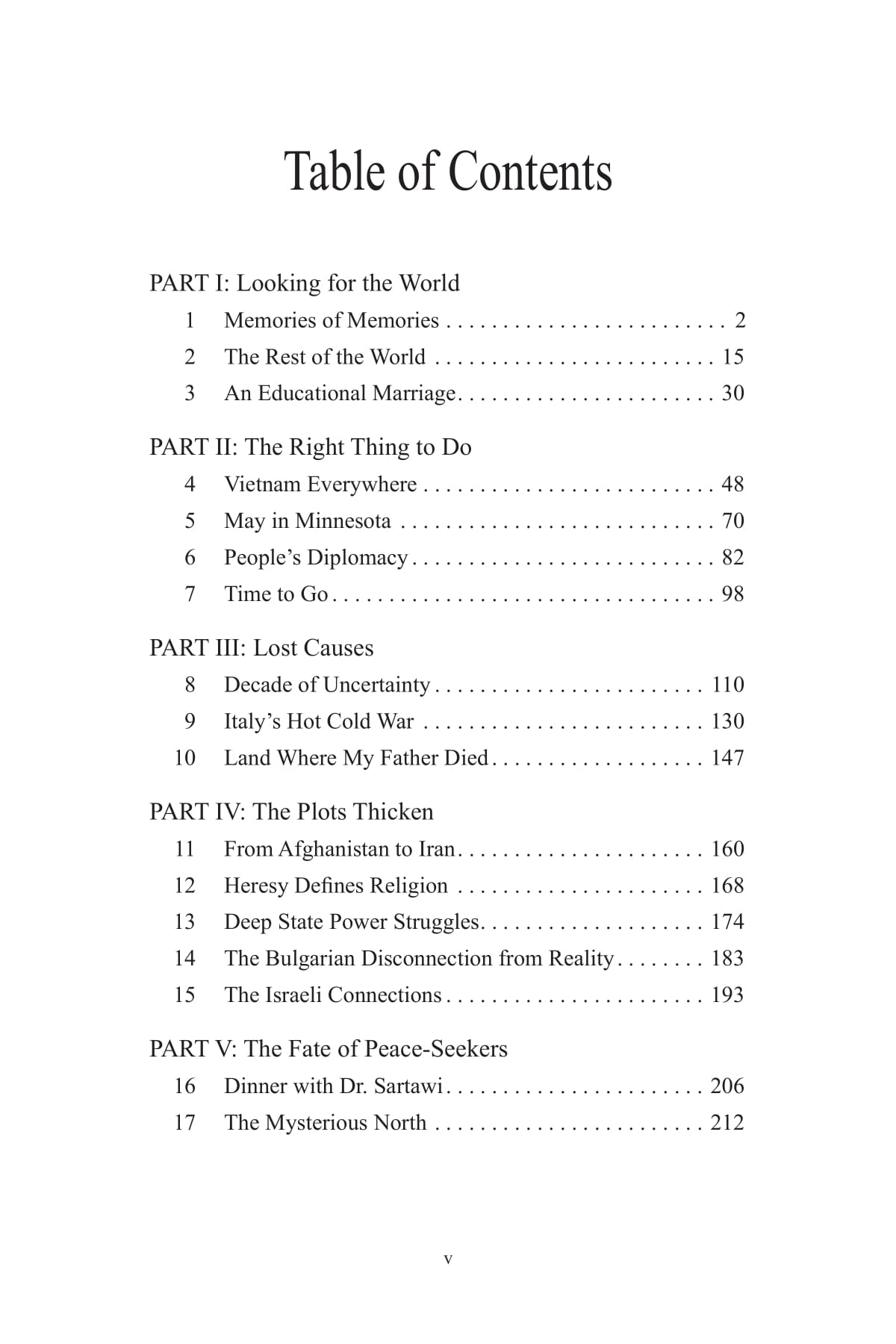 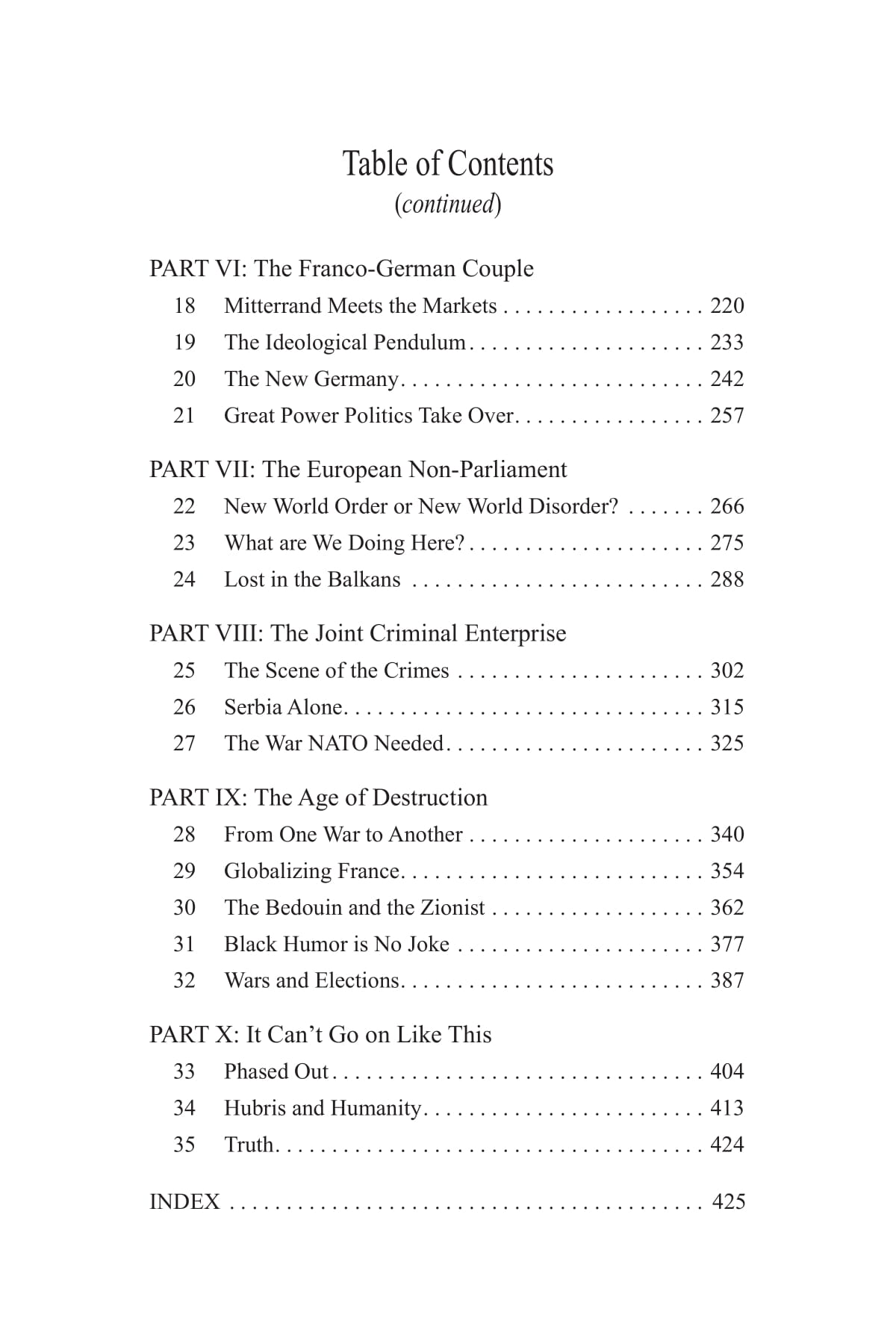 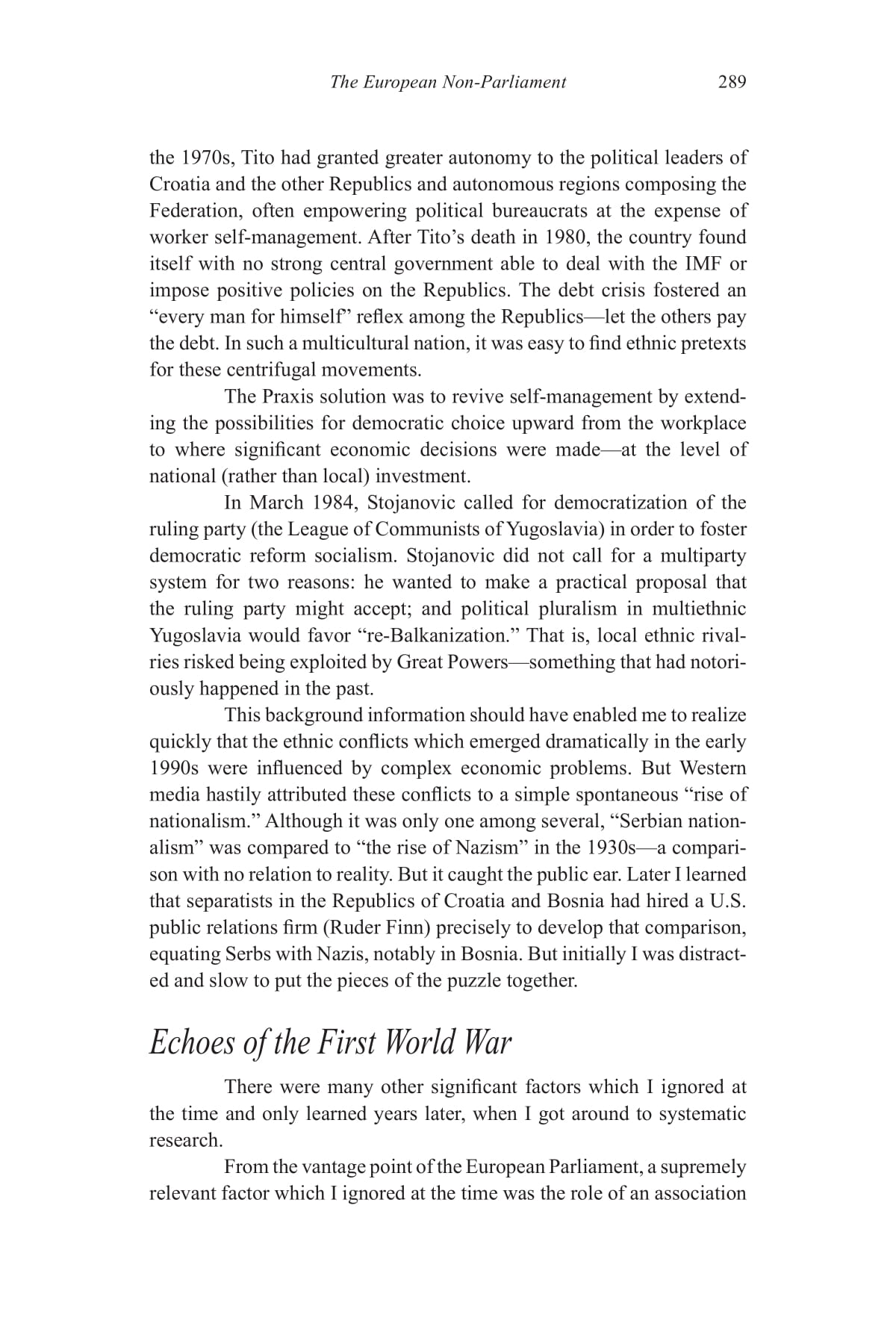 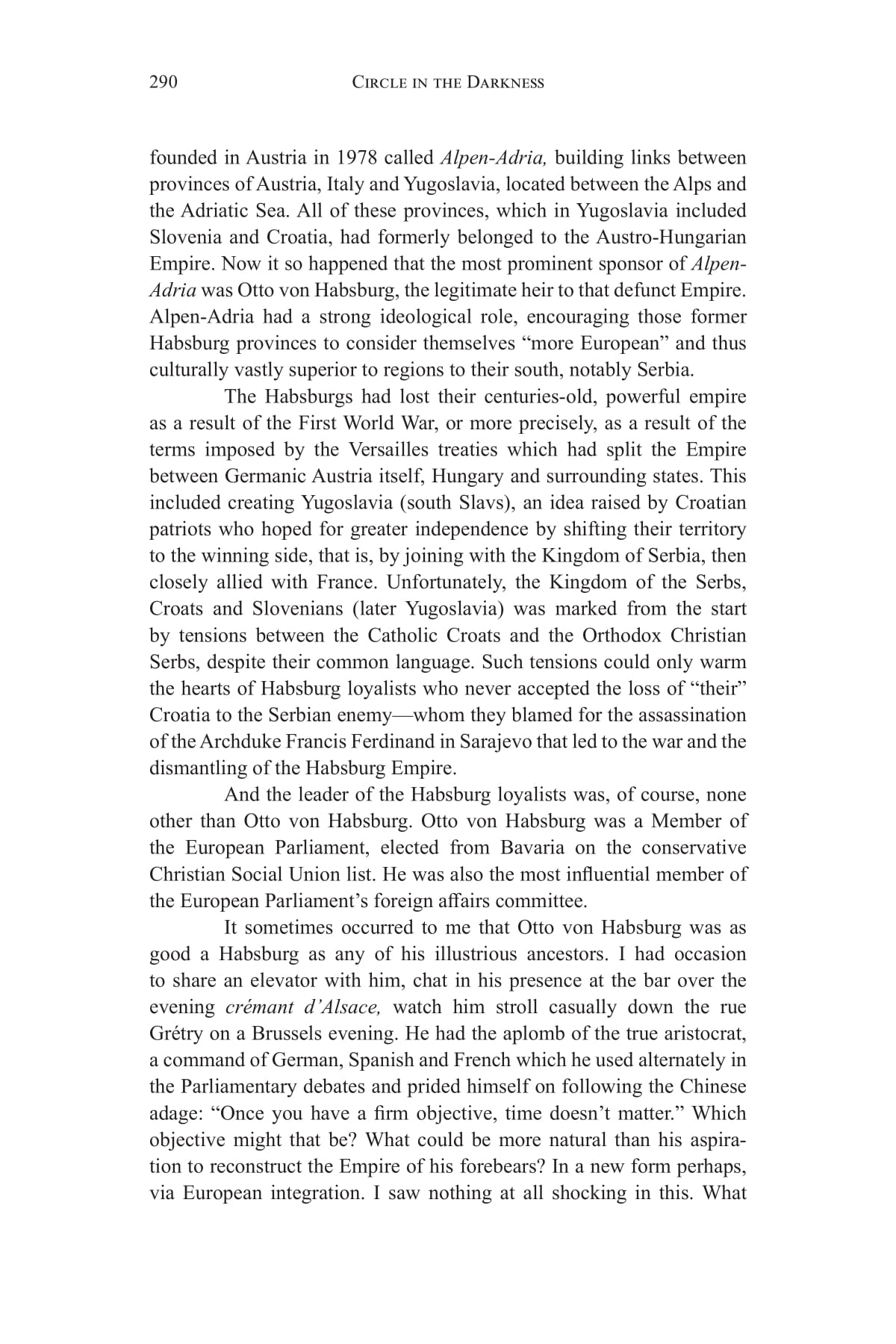 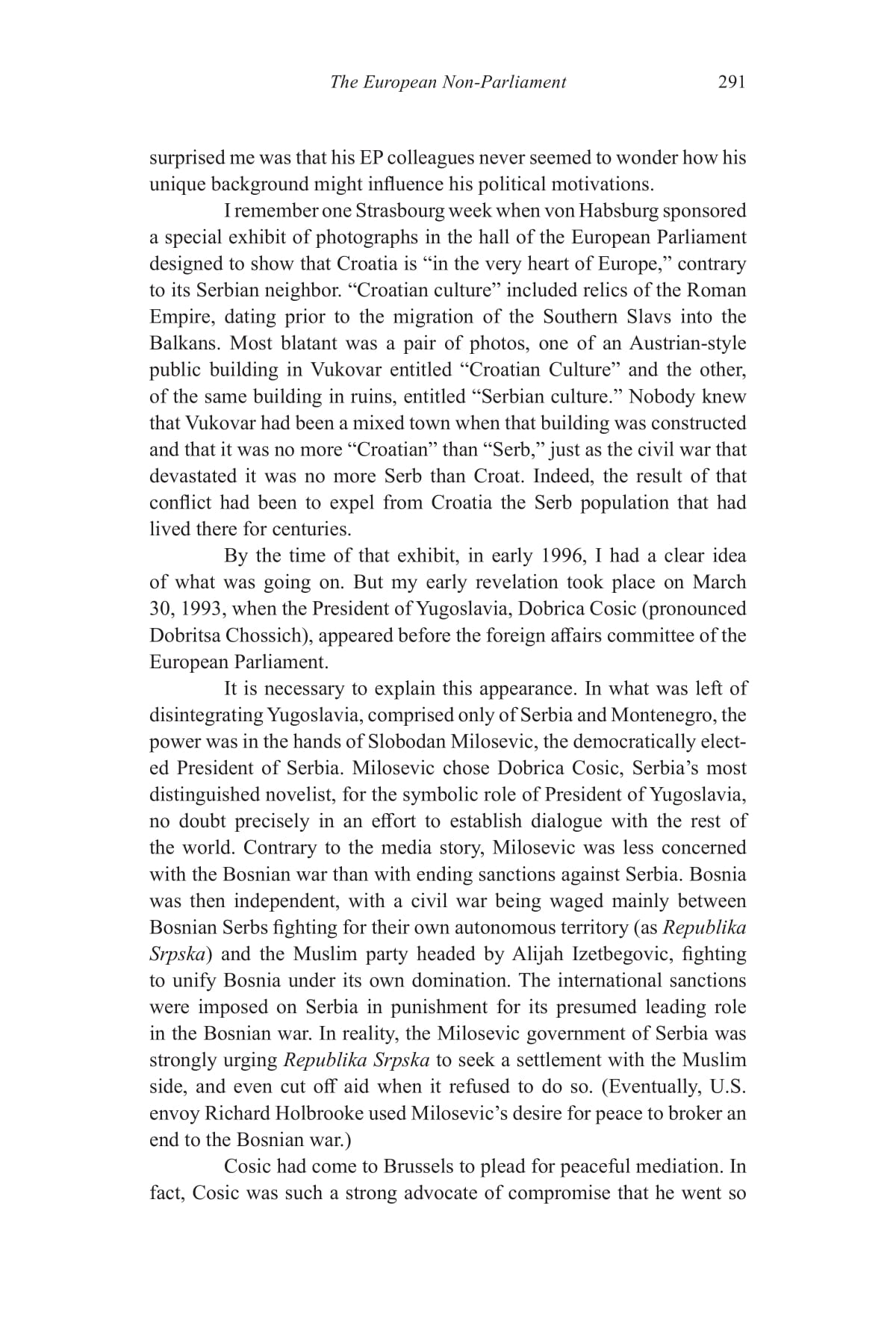 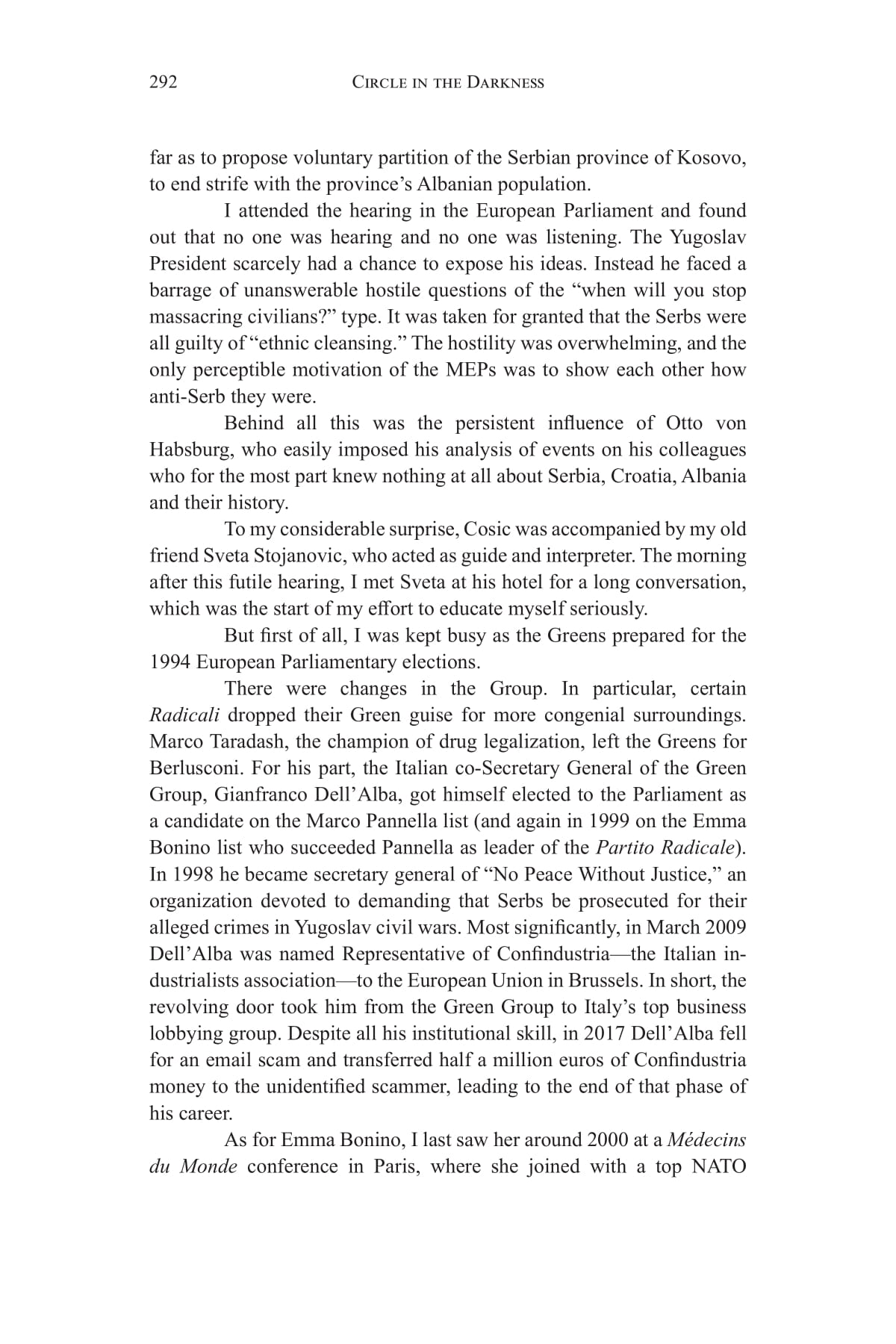 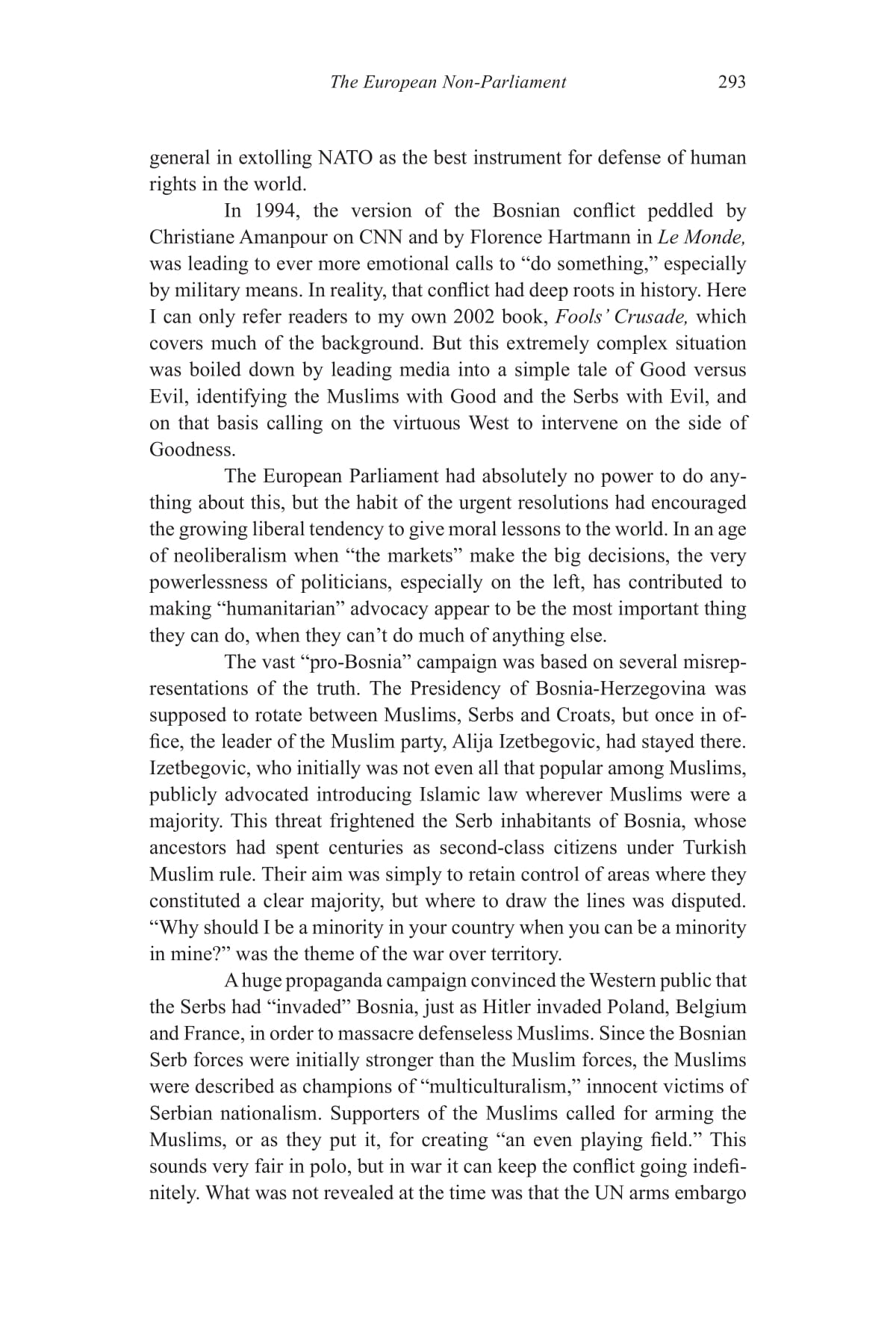 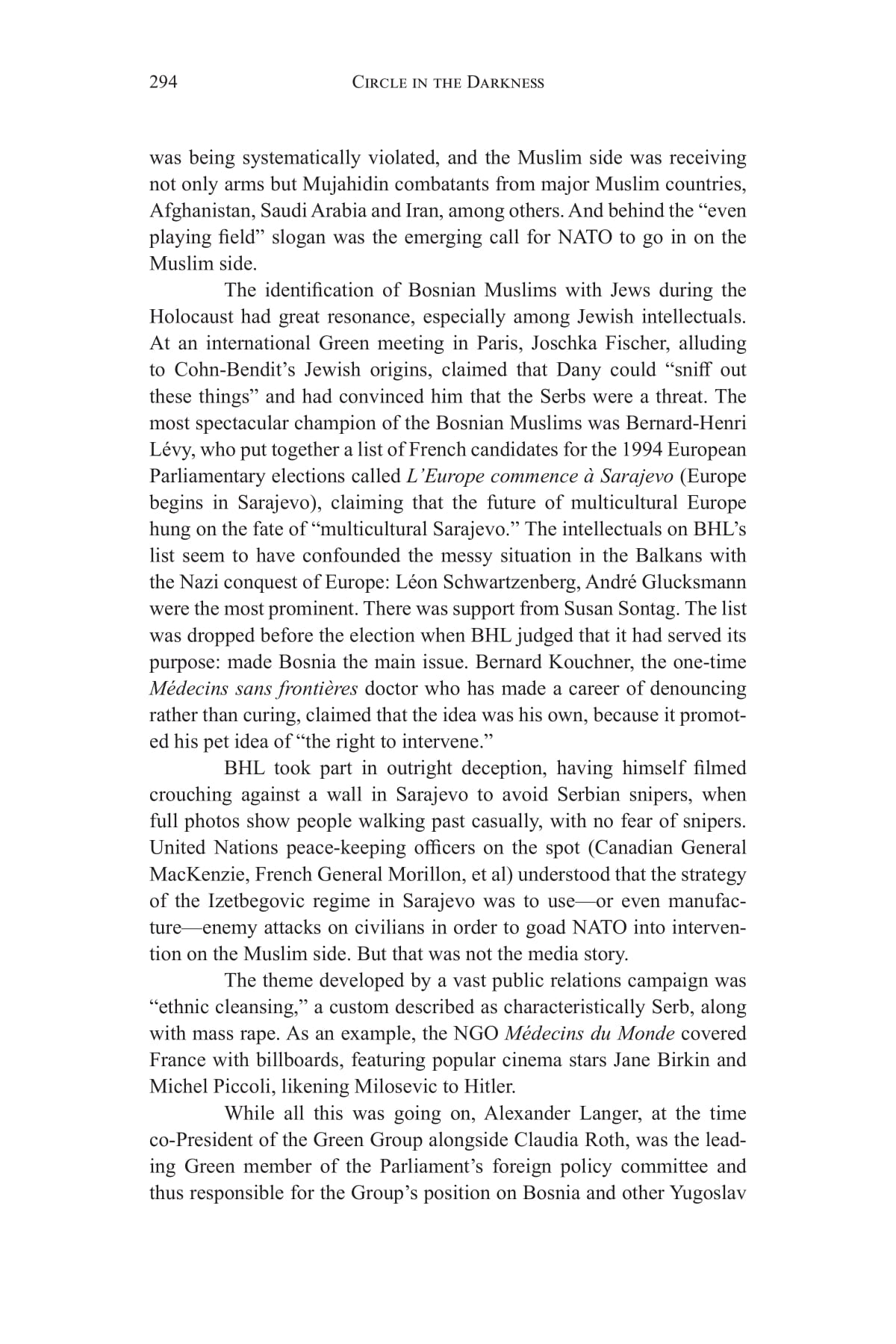 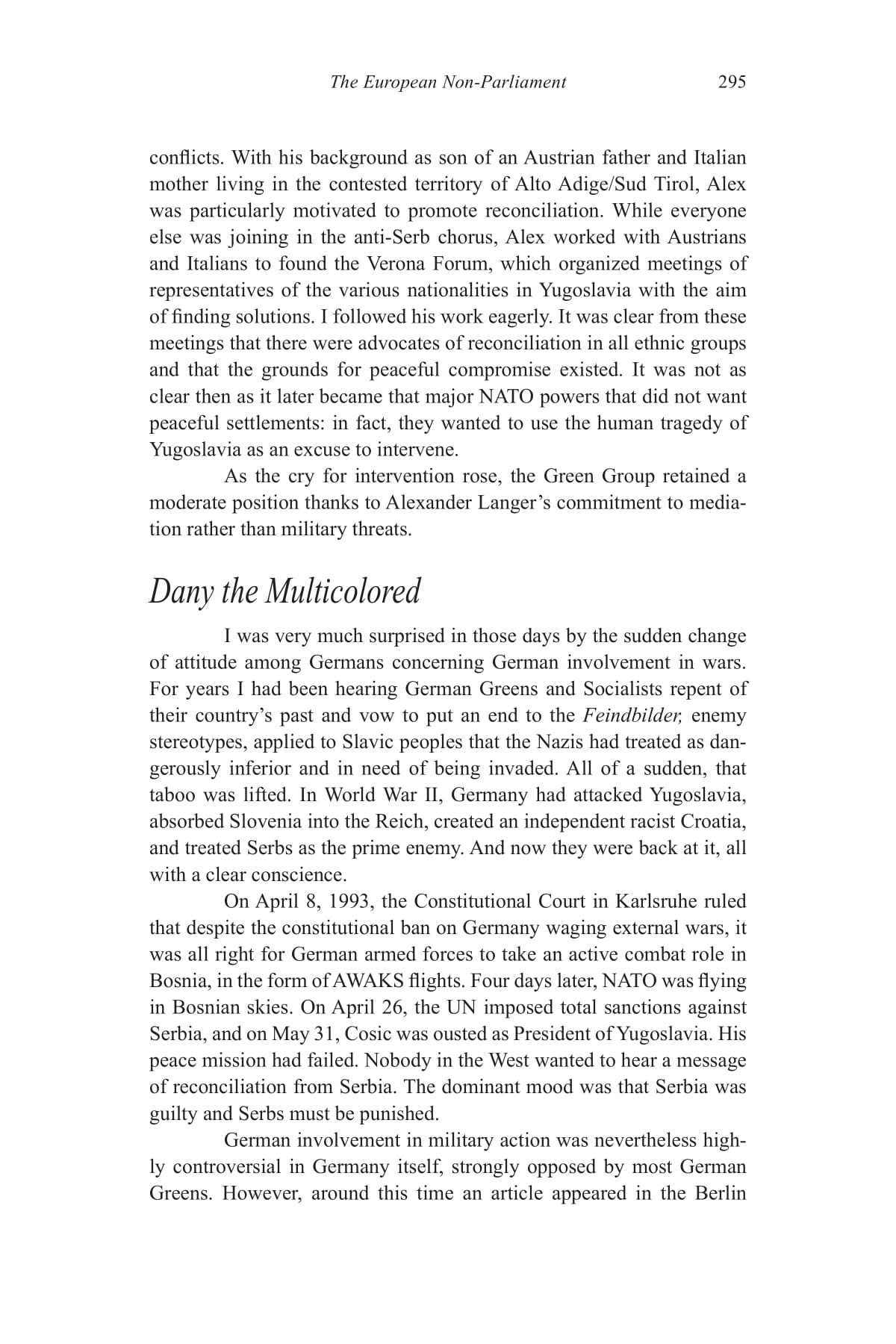 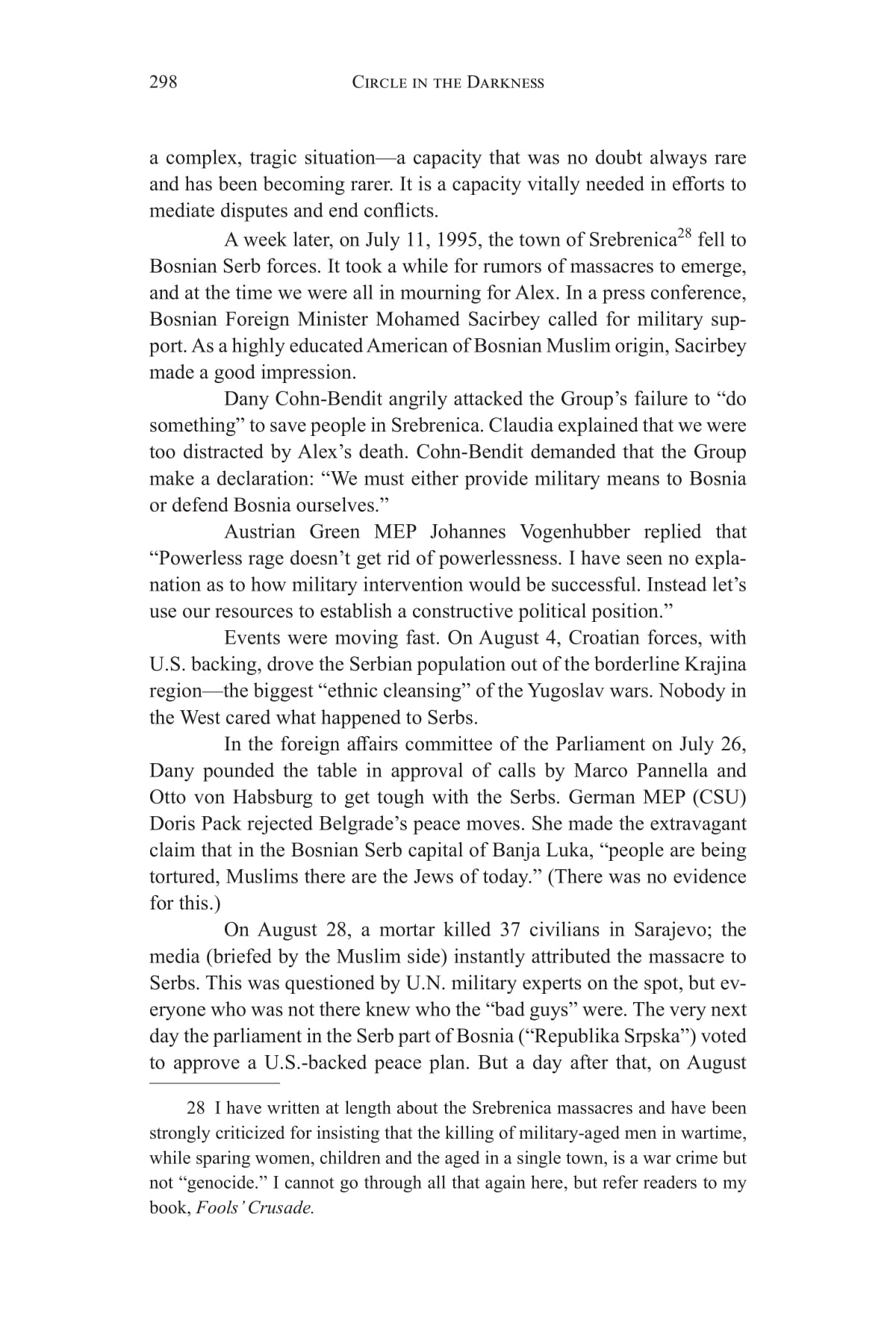 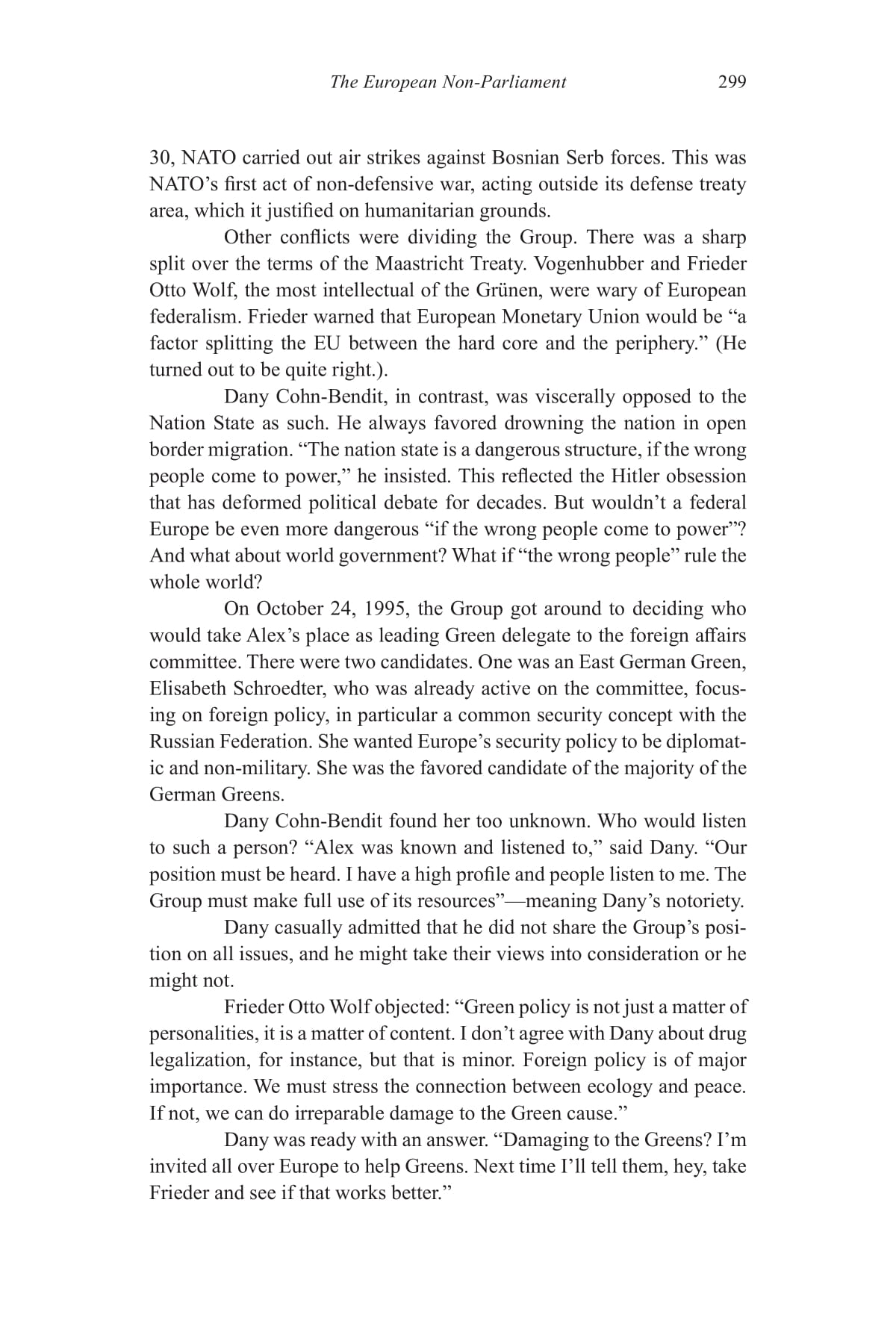 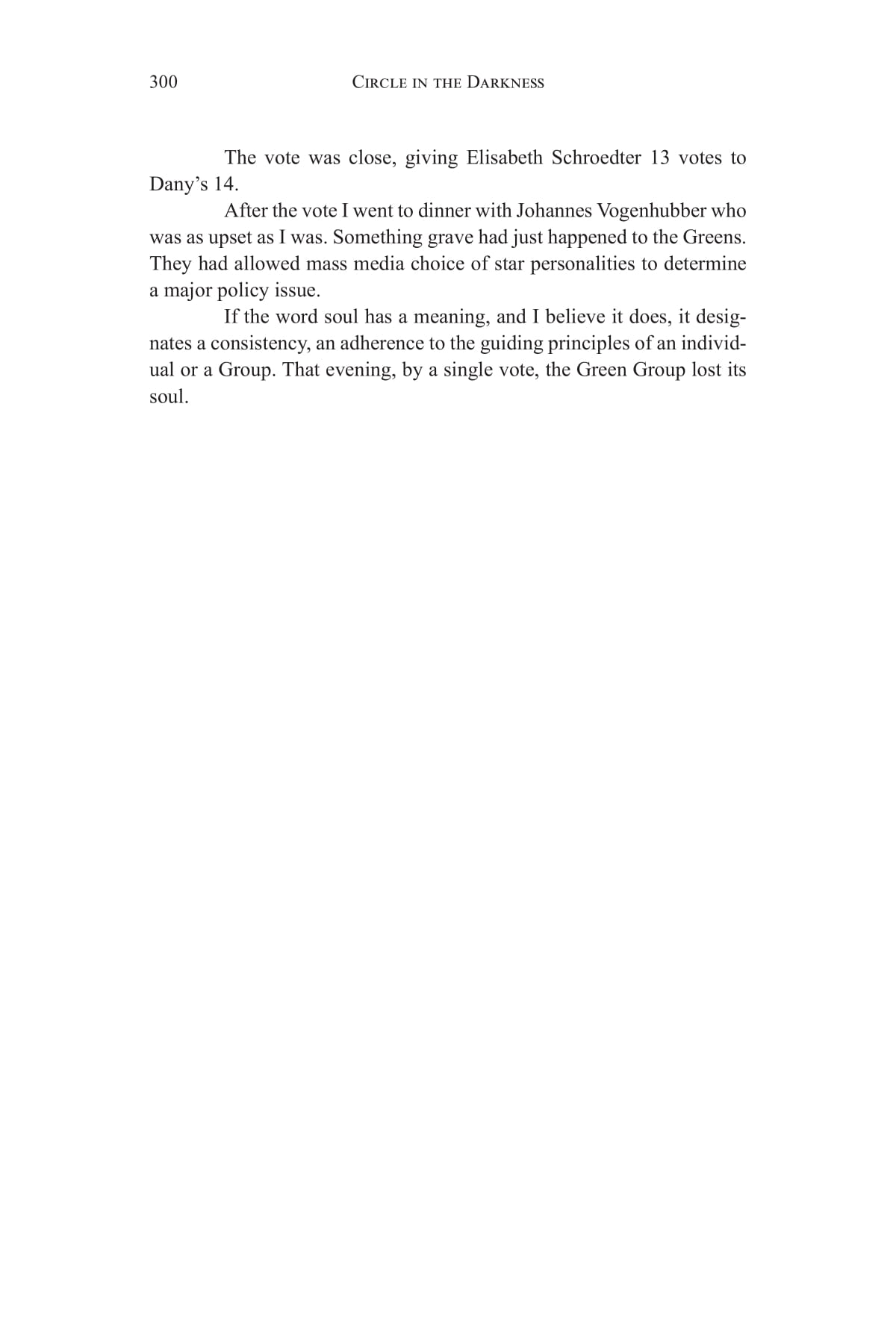 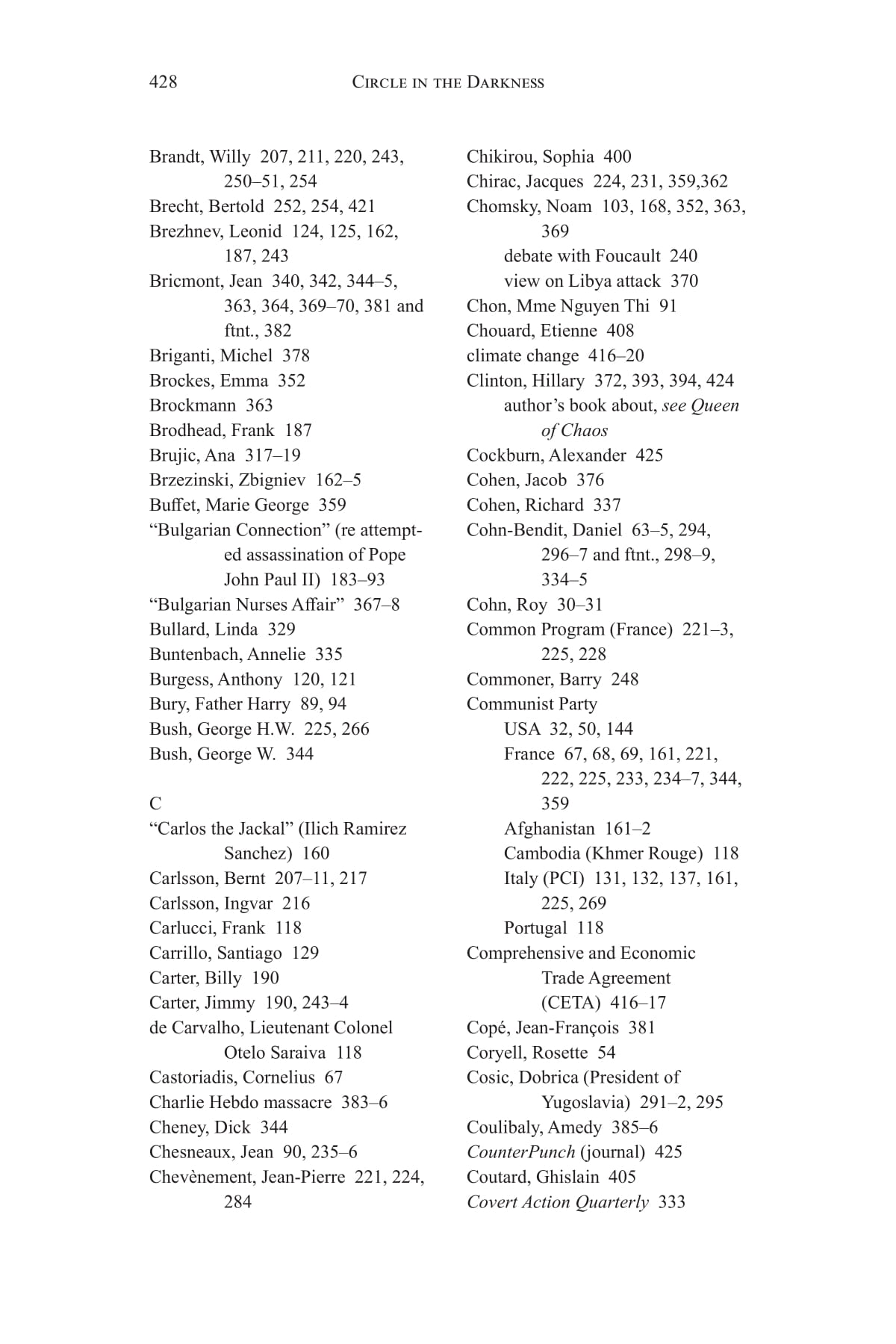 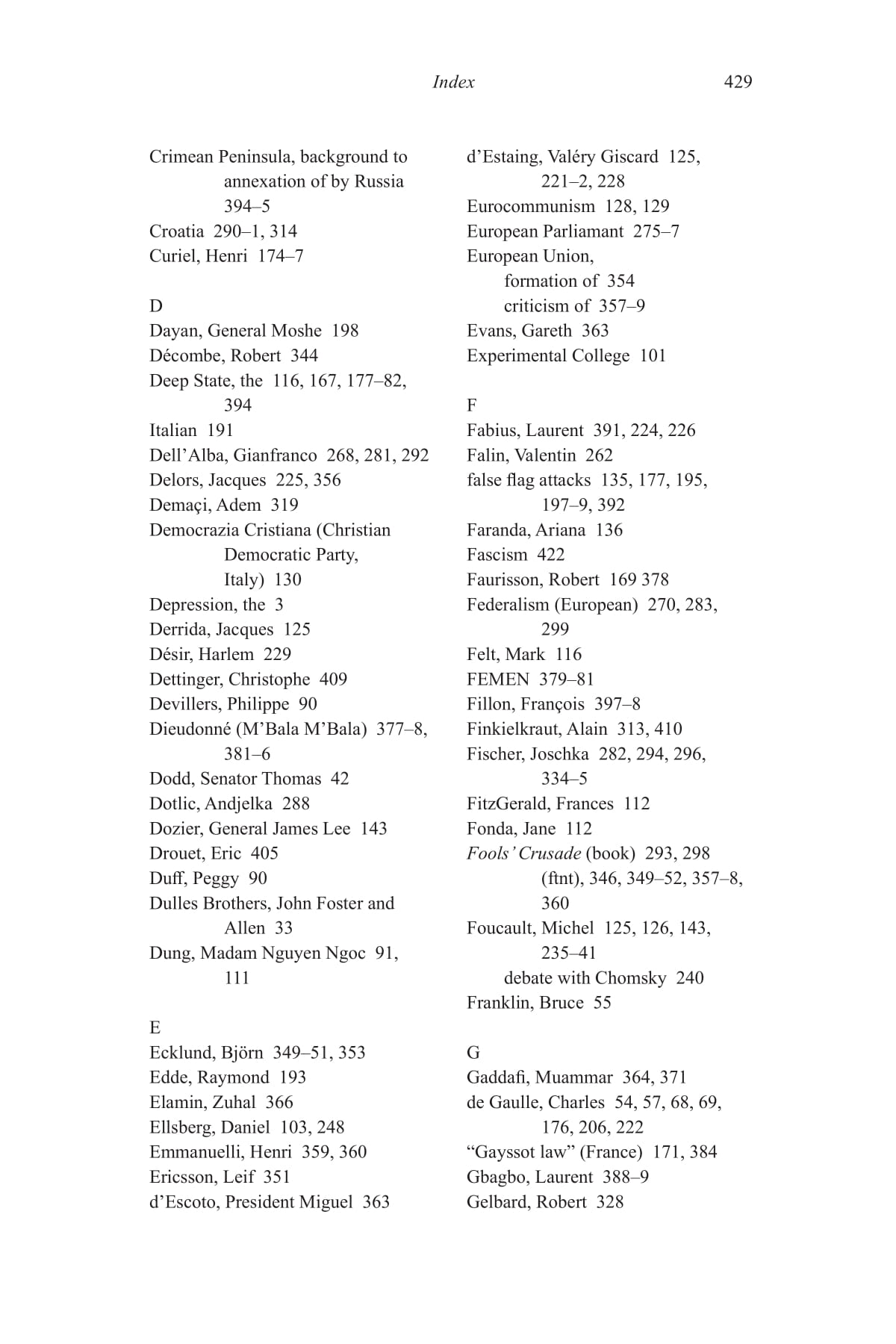 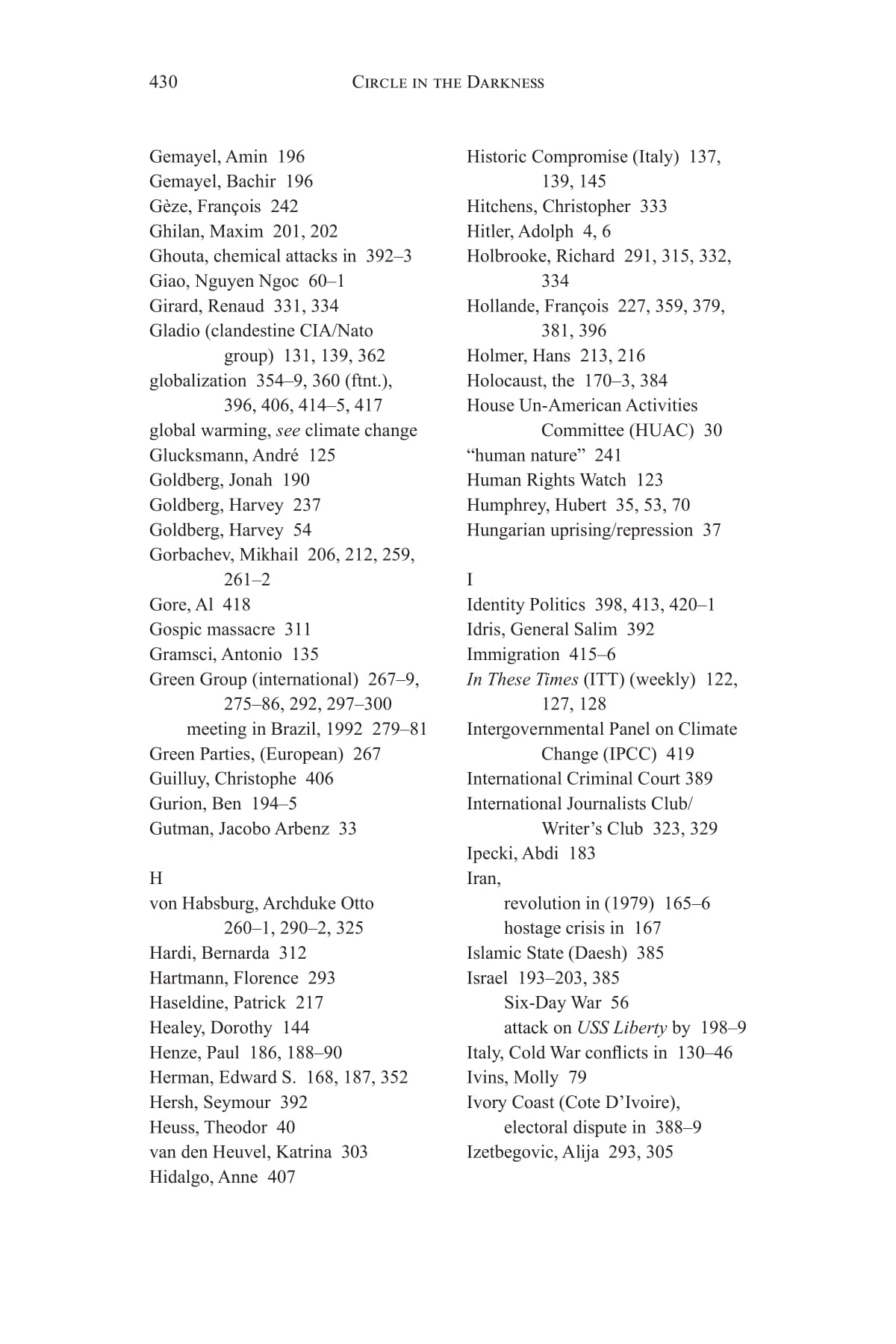 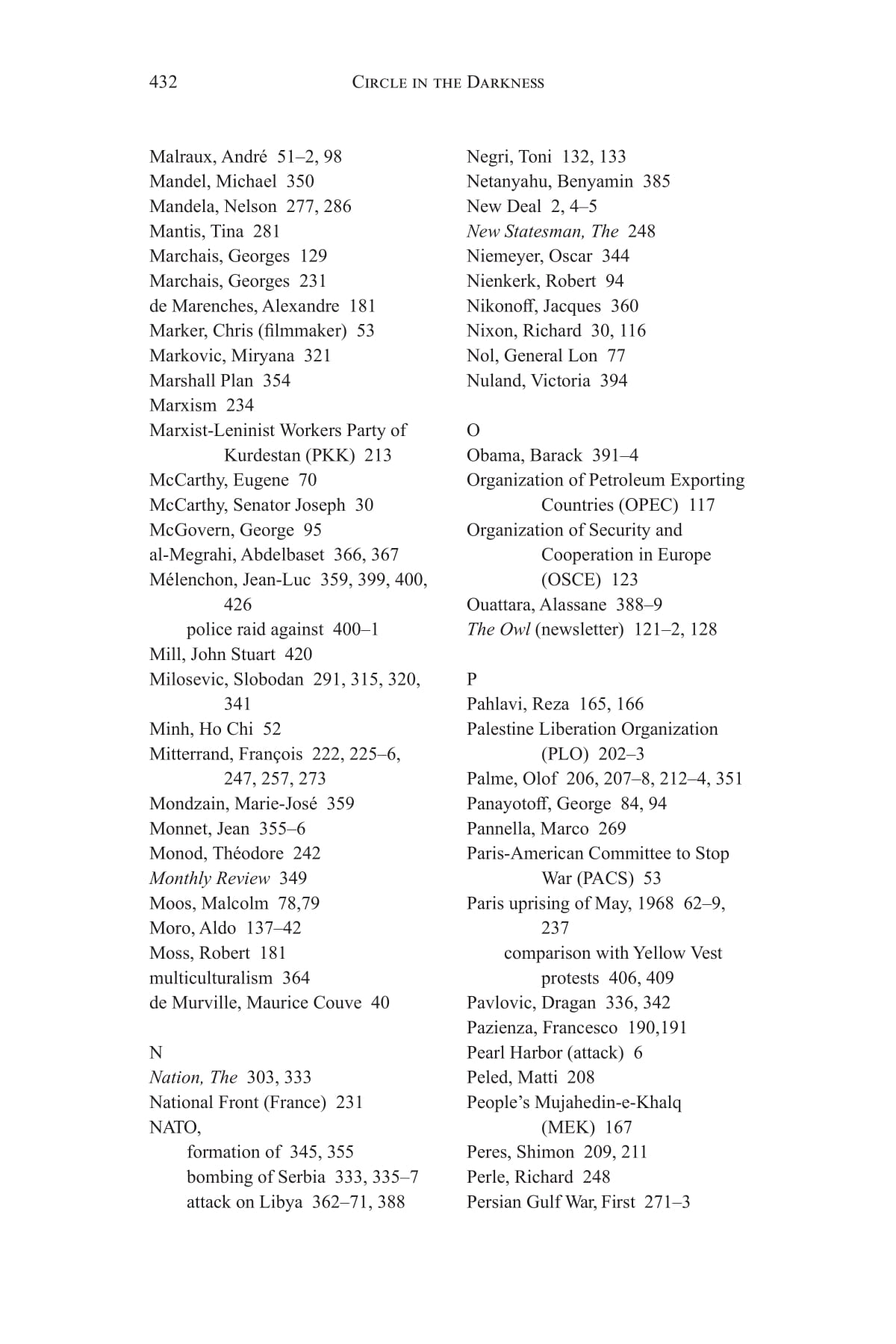 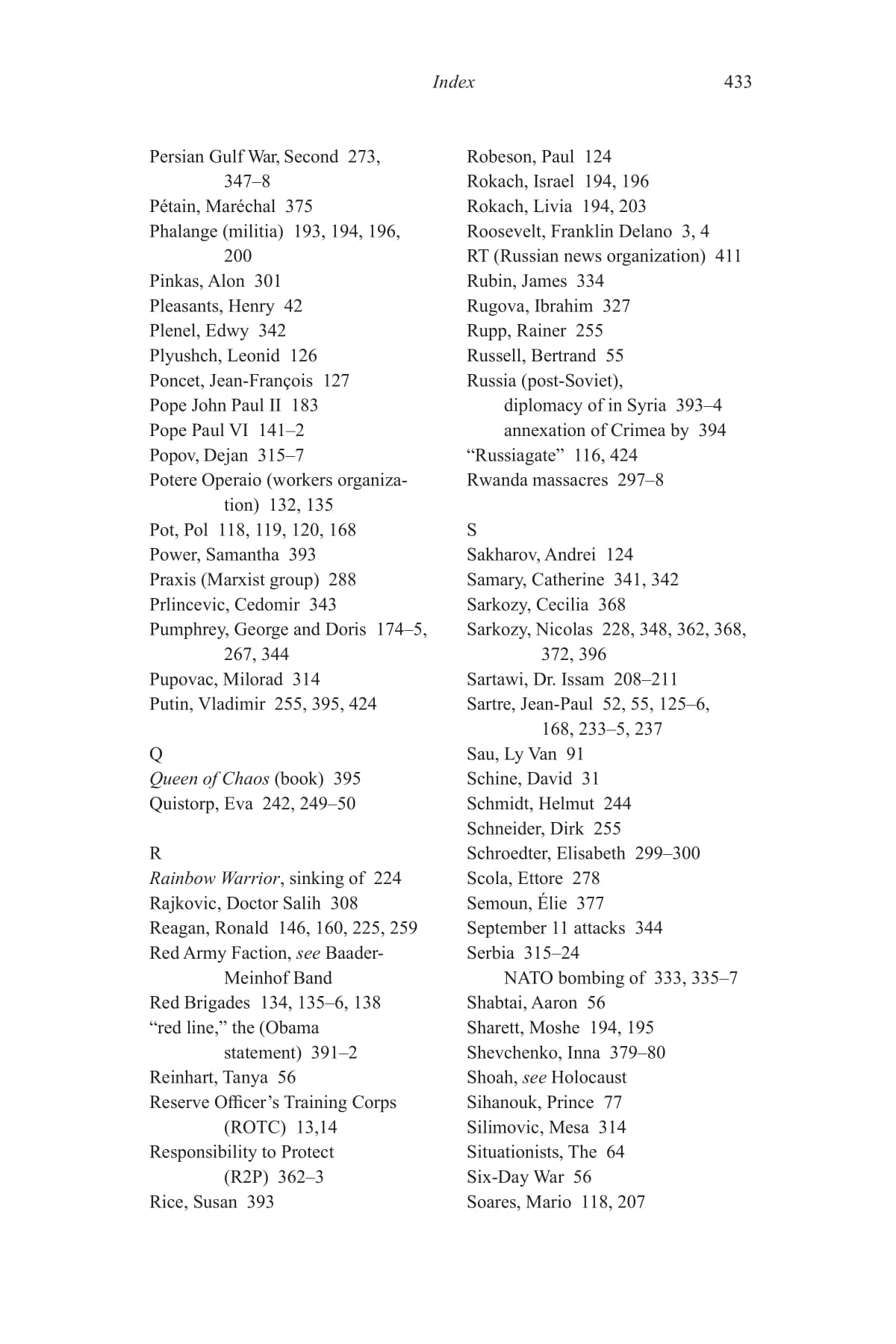 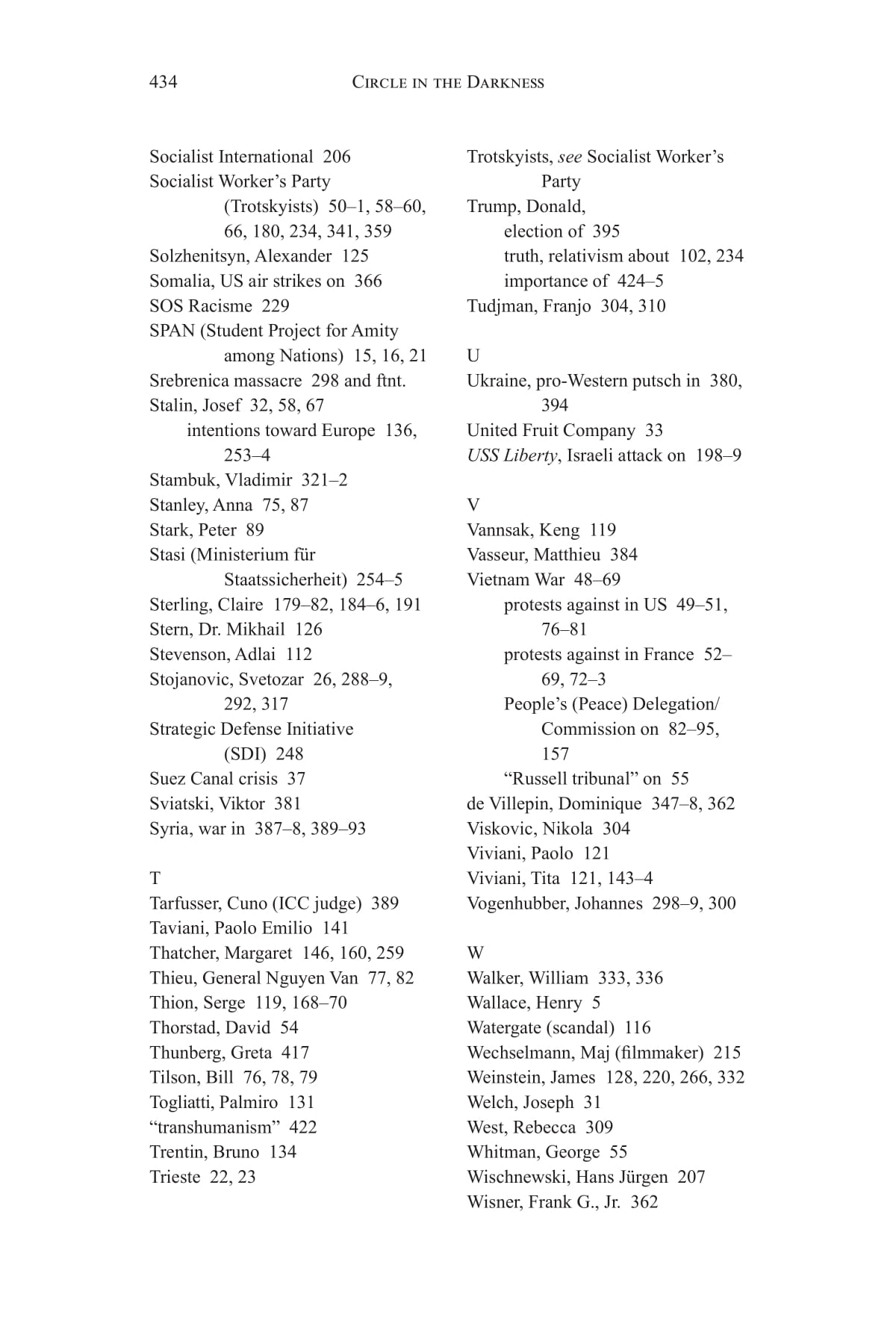 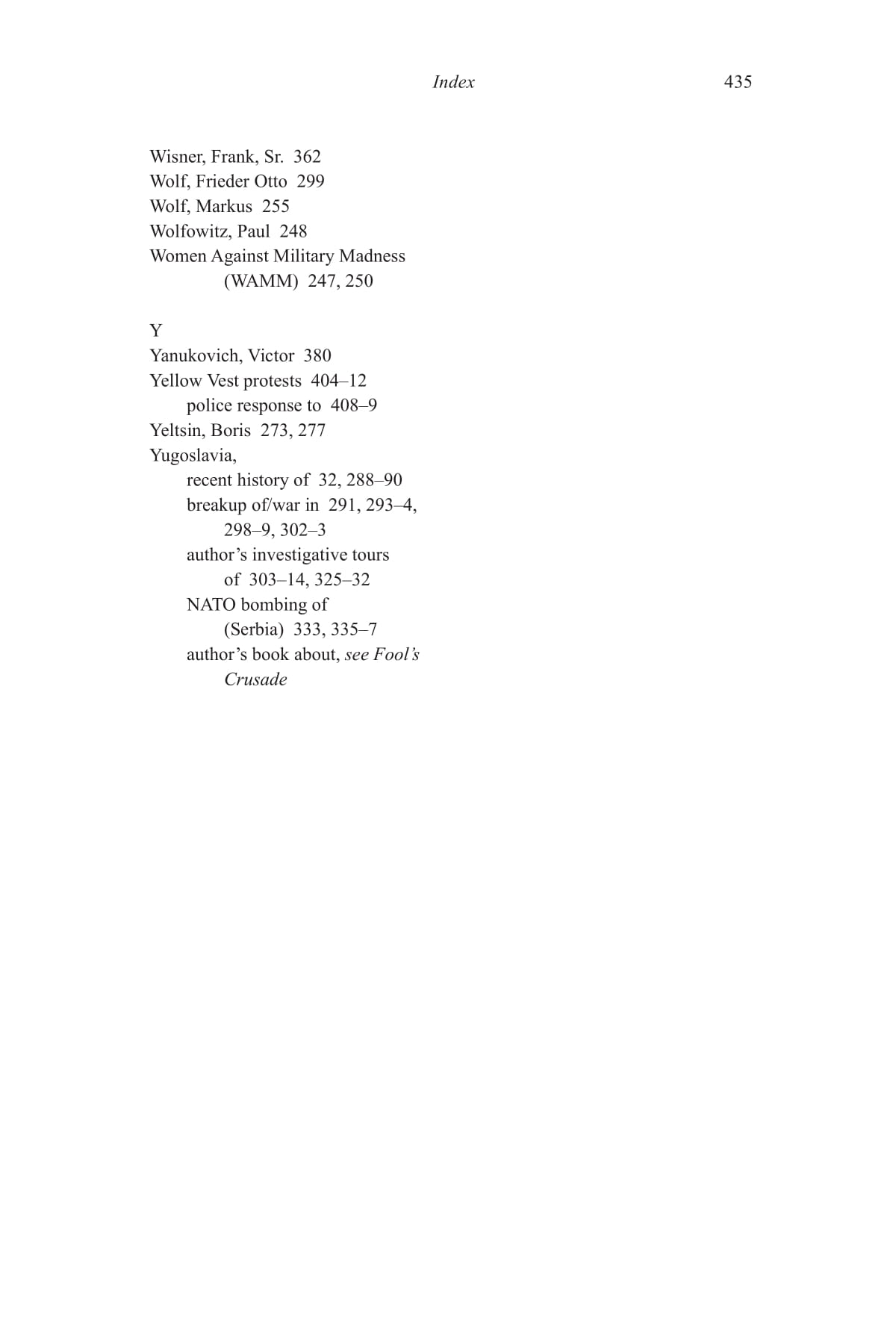 “Diana Johnstone spent over half a century chronicling contemporary history from the Cold War to the rise of groups such as Antifa. Her memoir, Circle in the Darkness, is not only a fascinating window into a contemporary event, but also a blistering attack on the Left, which she argues, correctly, betrayed its historical role as a champion of social justice and peace, replacing it with the boutique activism of identity politics, political correctness, and what has become known as humanitarian intervention.” —CHRIS HEDGES

” … fiercely courageous and independent reporting, historical analysis, and activism … With her eyes on the prize, Diana Johnstone has stayed the course to oppose U.S. and Western aggression, using her critical skills to expose endless horror and insisting that a truthful understanding of historical events remains a necessary tool against murder and illegality. We are deeply indebted to her.”  —JOHN MARCIANO, Monthly Review.

“Diana Johnstone’s just published book, Circle in the Darkness: Memoir of a World Watcher, is the best book I have ever read, the most revealing, the most accurate, the most truthful, the most moral and humane, the most sincere and heartfelt, and the best written.  Her book is far more than a memoir.  It is a history that has not previously been written.” —PAUL CRAIG ROBERTS

“Diana Johnstone is a superb reporter of a kind and calibre that barely exists today. Her principled, eloquent memoirs are often touching, and wise, and bracing in their truth in an age of deceit. I salute her.” —JOHN PILGER, award-winning Australian journalist, author and broadcaster/documentary maker

“Diana Johnstone has spent a lifetime trying to write the truth as you will see in this compelling memoir. Her dedication to a broad coalition for peace and against militarism is an inspiration. She continues to suffer attacks from those who, blinded by their sectarianism, cannot abide such a coalition. Readers will learn a great deal from this fascinating, first-hand look at our world from the Second War through the Cold War and, ultimately, to our “forever wars” of the 21st century.” —RON PAUL, MD., Former Member of US Congress

“Johnstone is part of a distinguished line of American expatriate writers, who, perhaps because of an objectivity conferred by distance, saw their country more clearly than many of their stateside contemporaries.”  —JAMES CARDIN, Counterpunch

“Diana Johnstone’s book Circle in the Darkness is a brilliant analysis of the major imperial wars of the last half century. The personal and political merge to provide a wealth of experiences and insights embedded in a profound theoretical framework.” —JAMES PETRAS

“Johnstone’s recollections span the period between the Depression and the current moment, and bring to life in poignant detail the most significant events in Europe for the entire post-World War II era, and particularly the interface of the U.S. with Europe, with valuable reflections on events in Southeast Asia, the Middle East and North Africa as well. Both as engaged observer and as direct participant, sometimes of groundbreaking anti-war initiatives, her accounts are always candid, never cruel; passionate and compassionate, uniformly humble; often wry and as often tender. Her account to her daughter of the last days of Johnstone’s father are especially memorable in the last respect. Having lived through most of what she recounts, I only fully now understand the broad epoch she revives and enlivens after sharing her journey through it.”  —RICK ROZOFF, author and editor, STOP NATO

Add to Wishlist
Facebook Twitter Google+ LinkedIn
SKU: N/A Categories: Democracy/Politics, Europe, History Tags: Balkans, Europe, Green Parties, memoir, the Left
A discount of 40% (plus shipping) will automatically be applied to the purchase of 10 or more copies of any Clarity Press titles when acquired directly from Clarity by paypal.

Circle in the Darkness recounts veteran journalist Diana Johnstone’s lifelong effort to understand what is going on in the world, seeking the truth about our troubled times beyond the veils of government propaganda and media deception. For Johnstone, the political is personal. From her experience of Cold War hostilities as a student in Yugoslavia, in the movement against the U.S. war against Vietnam, in May ’68, in professional and alternative journalism, in the historic peace movement of the 1980s that led to the reunification of Germany, in the transformation of the German Greens from peace to war party and the European Union’s sacrifice of democracy to “globalization”, her critical viewpoint dissects events and identifies trends.

She recounts in detail how the Western left betrayed its historical principles of social justice and peace and let itself be lured into approval of aggressive U.S.-NATO wars on the fallacious grounds of “human rights”. Subjects range from caustic analysis of the pretentious confusion of French philosophers to the stories of many courageous individuals whose struggle for peace and justice ended in deep personal tragedy, with a great deal in between.

Circle in the Darkness is a lucid, uncompromising tour through half a century of contemporary history intended especially for those who may aspire against all obstacles to change its course for the better.

DIANA JOHNSTONE, Ph.D. A native of Minnesota, raised in New Deal Washington, Diana Johnstone has spent more than half her life in Europe as a political observer and journalist, working for Agence France Presse, for In These Times as European Correspondent, and as press officer for the Green Group in the European Parliament. She holds a BA in Russian Area studies and a PhD in French literature. She is author of three books including Fools’ Crusade: Yugoslavia, NATO and Western Delusions., and coauthor with her father, Paul H. Johnstone, of From Mad to Madness: Inside Pentagon Nuclear War Planning

DEALBREAKER: Donald Trump and the Unmaking of the Iran Nuclear Agreement – Paperback