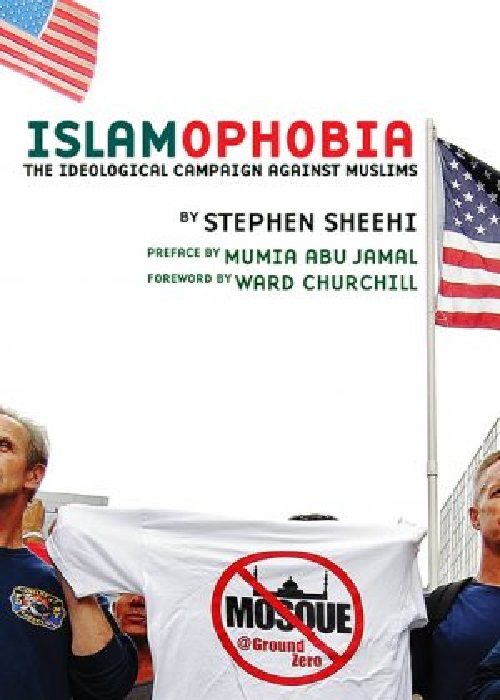 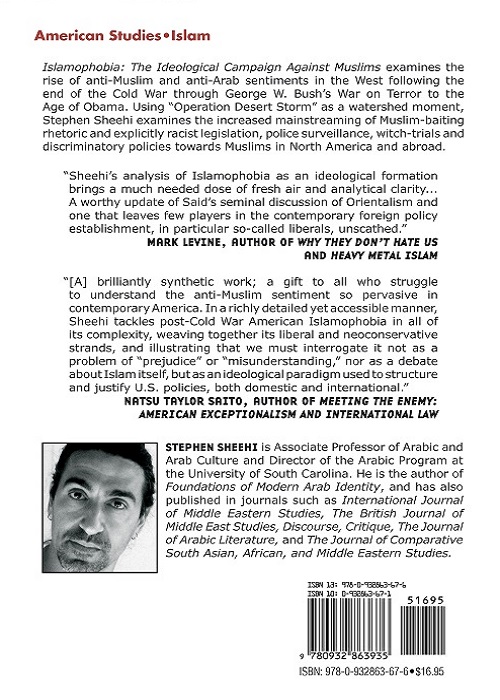 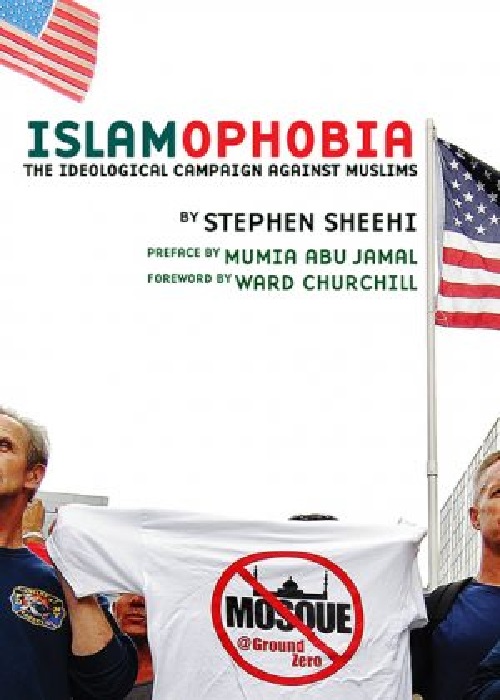 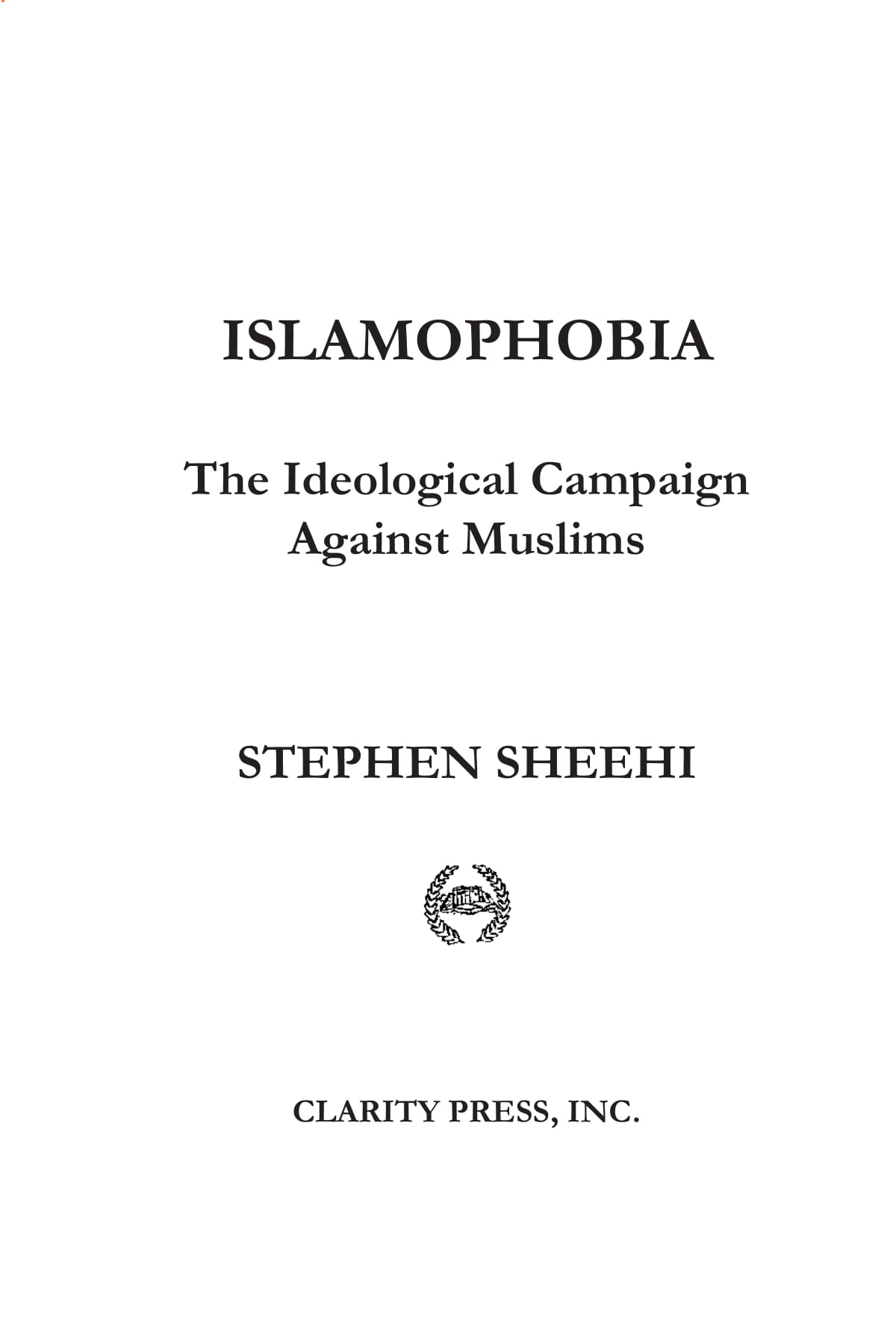 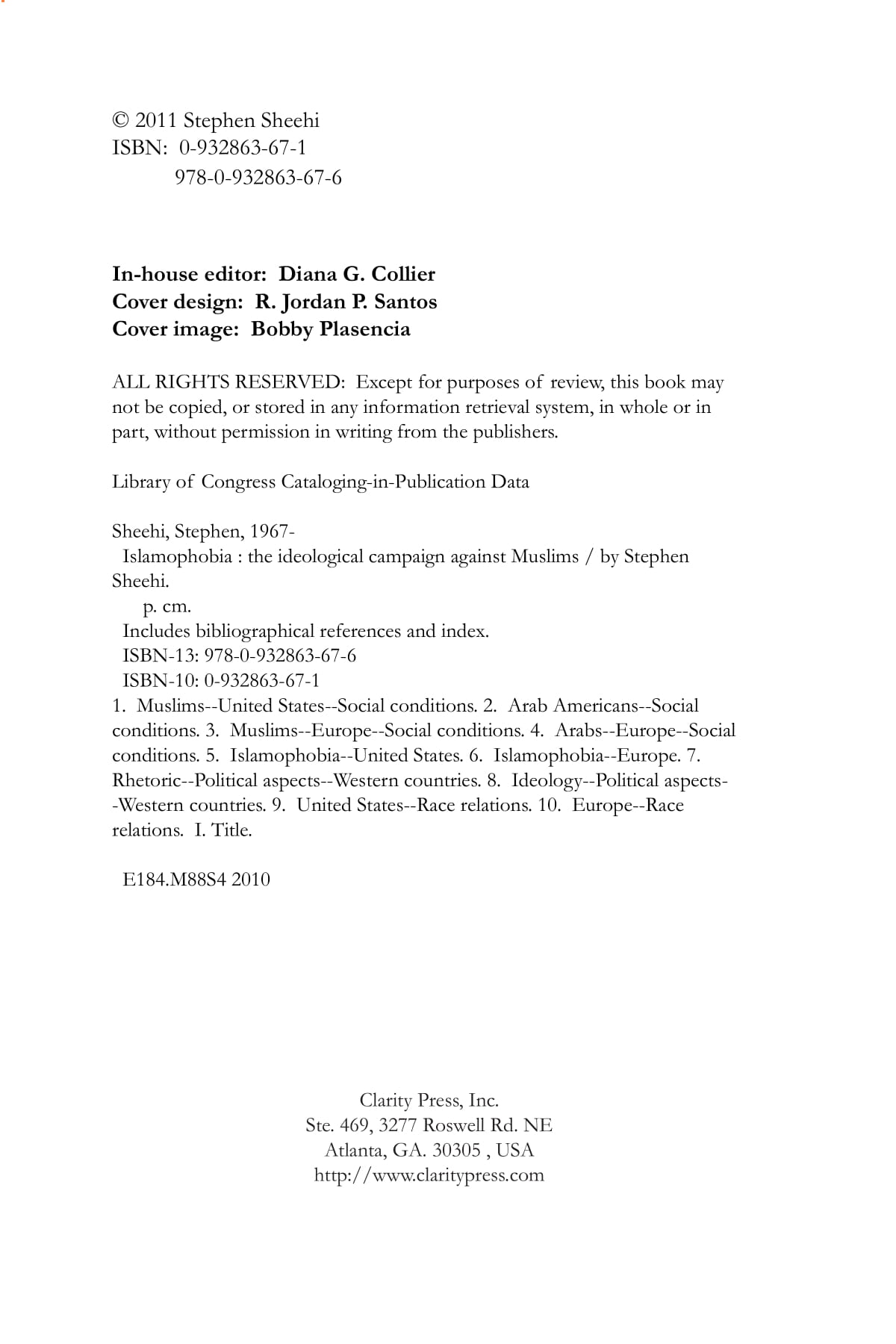 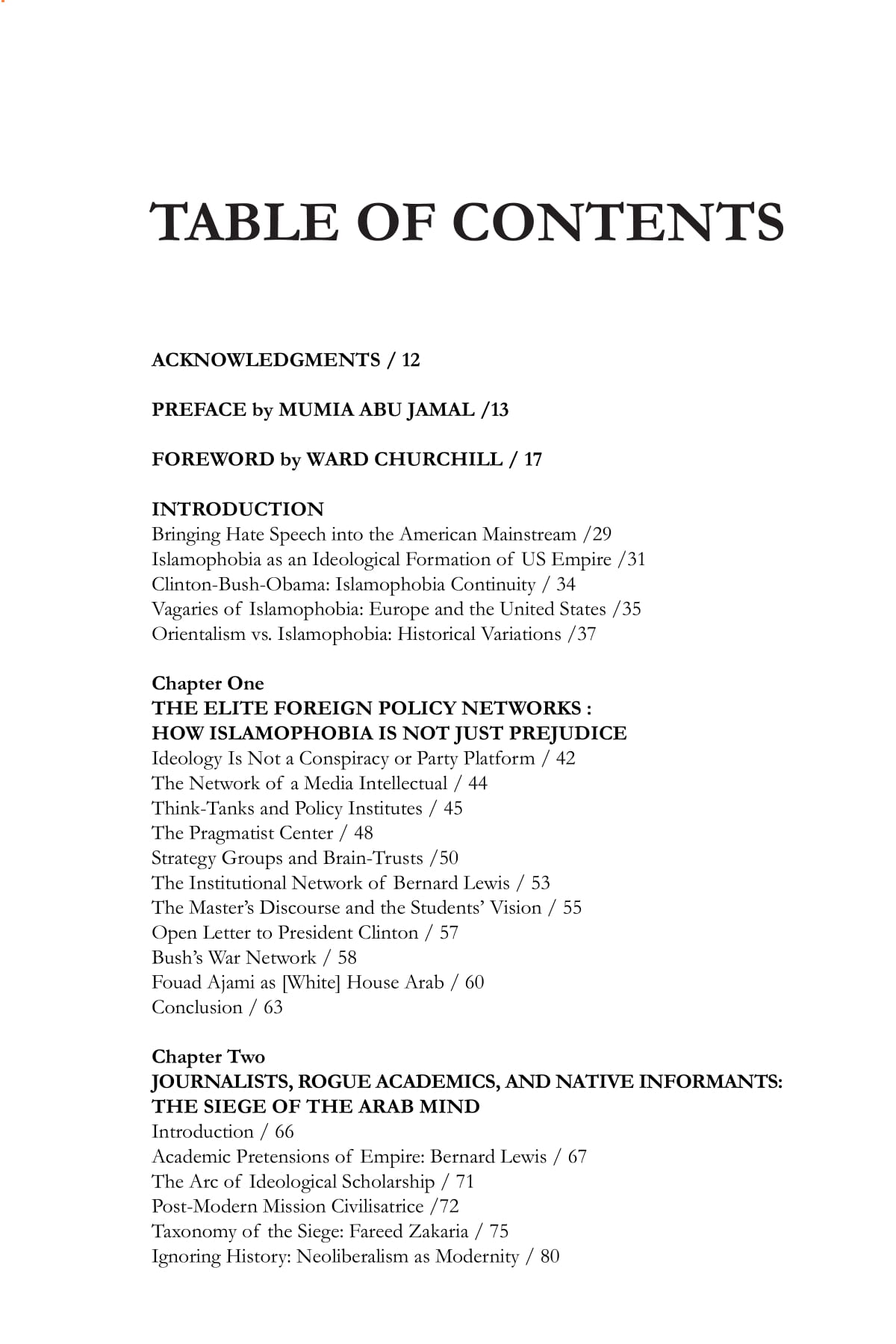 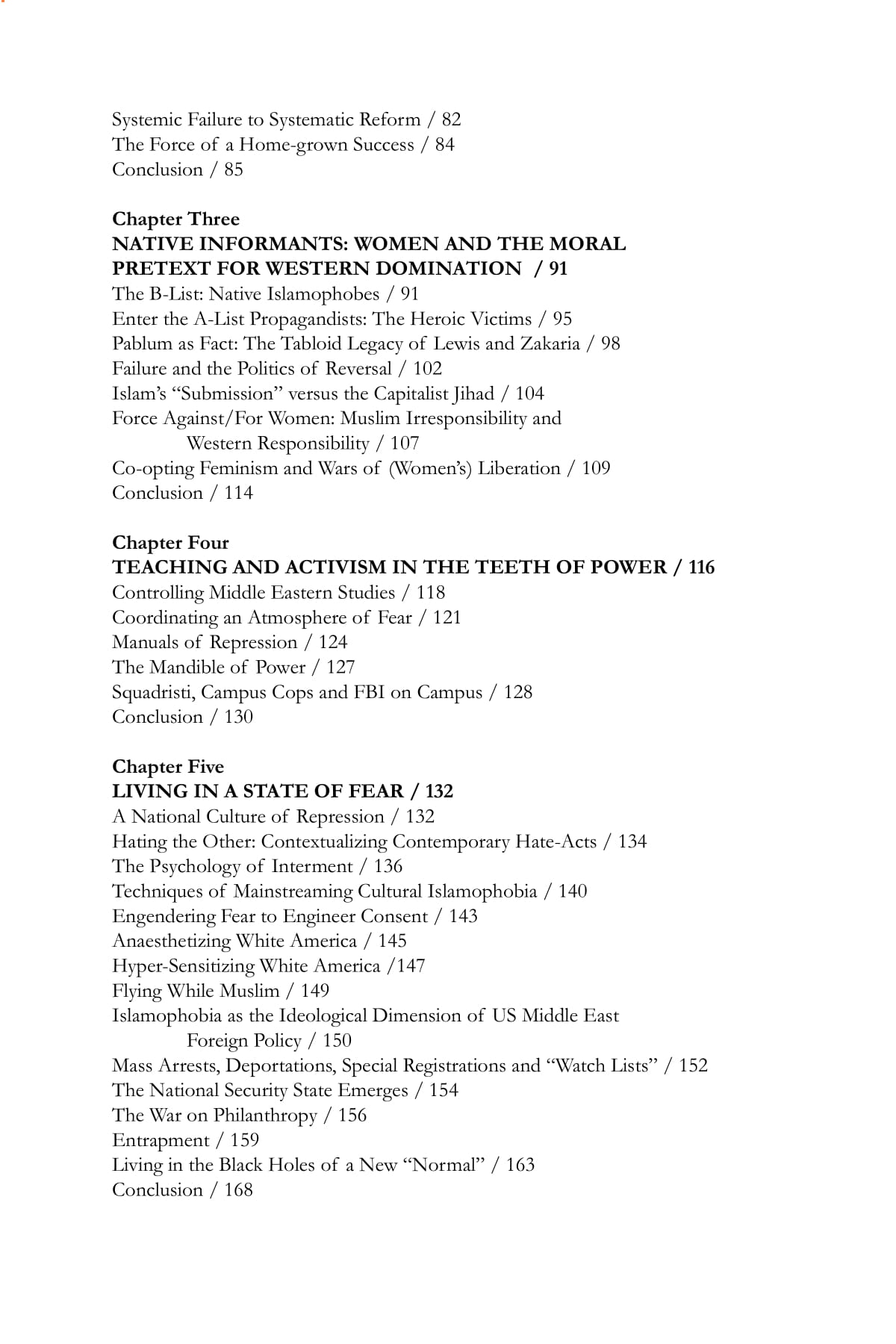 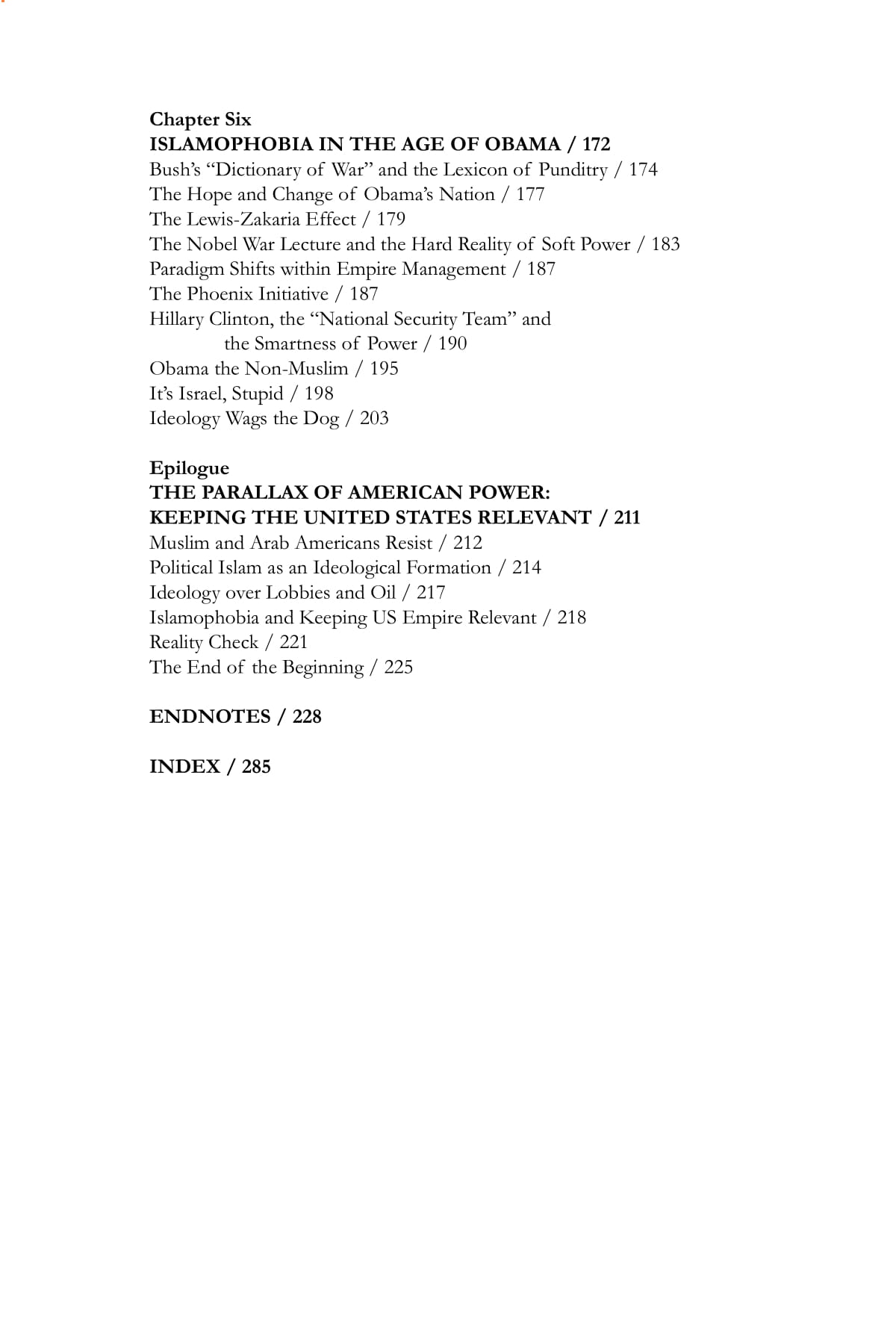 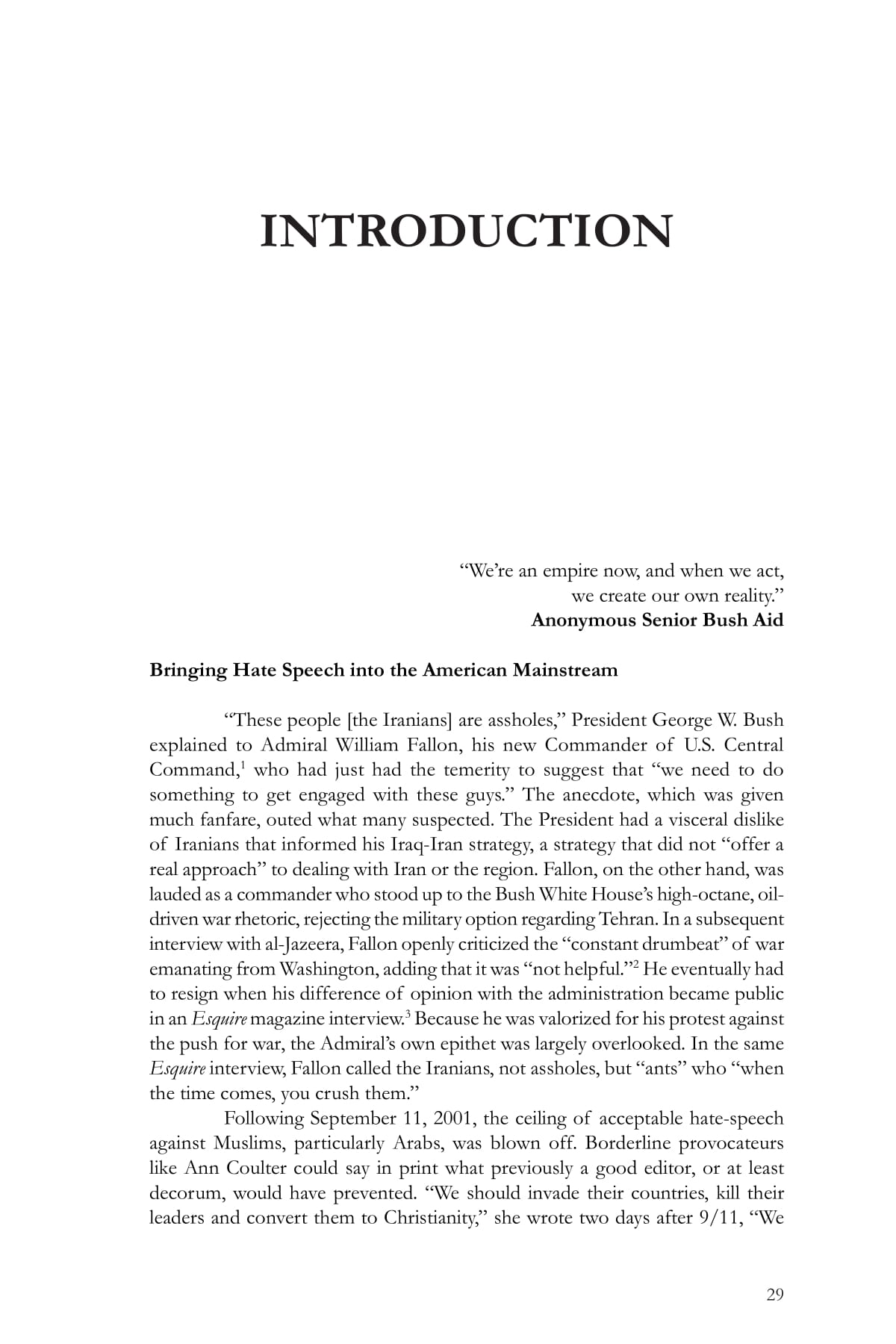 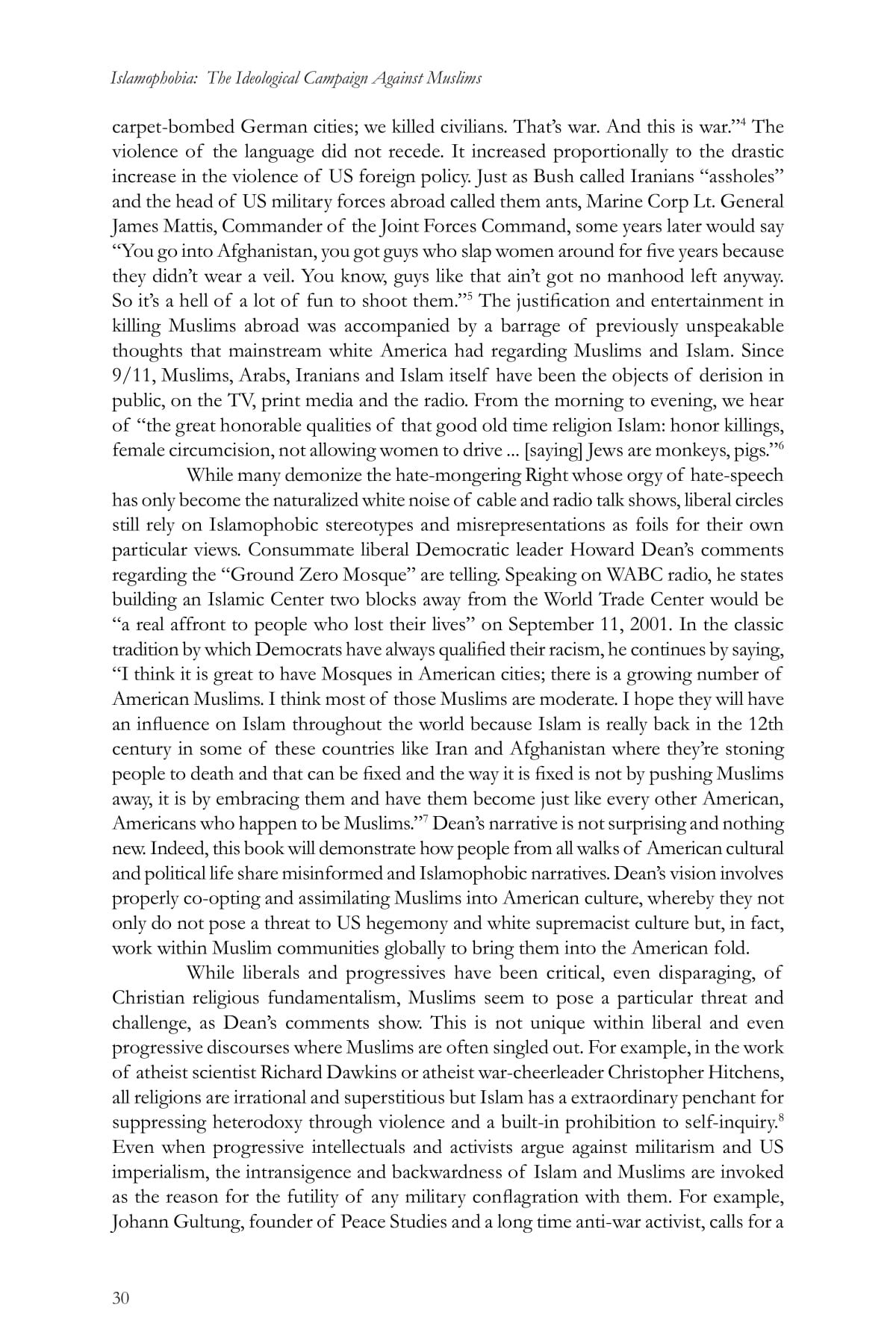 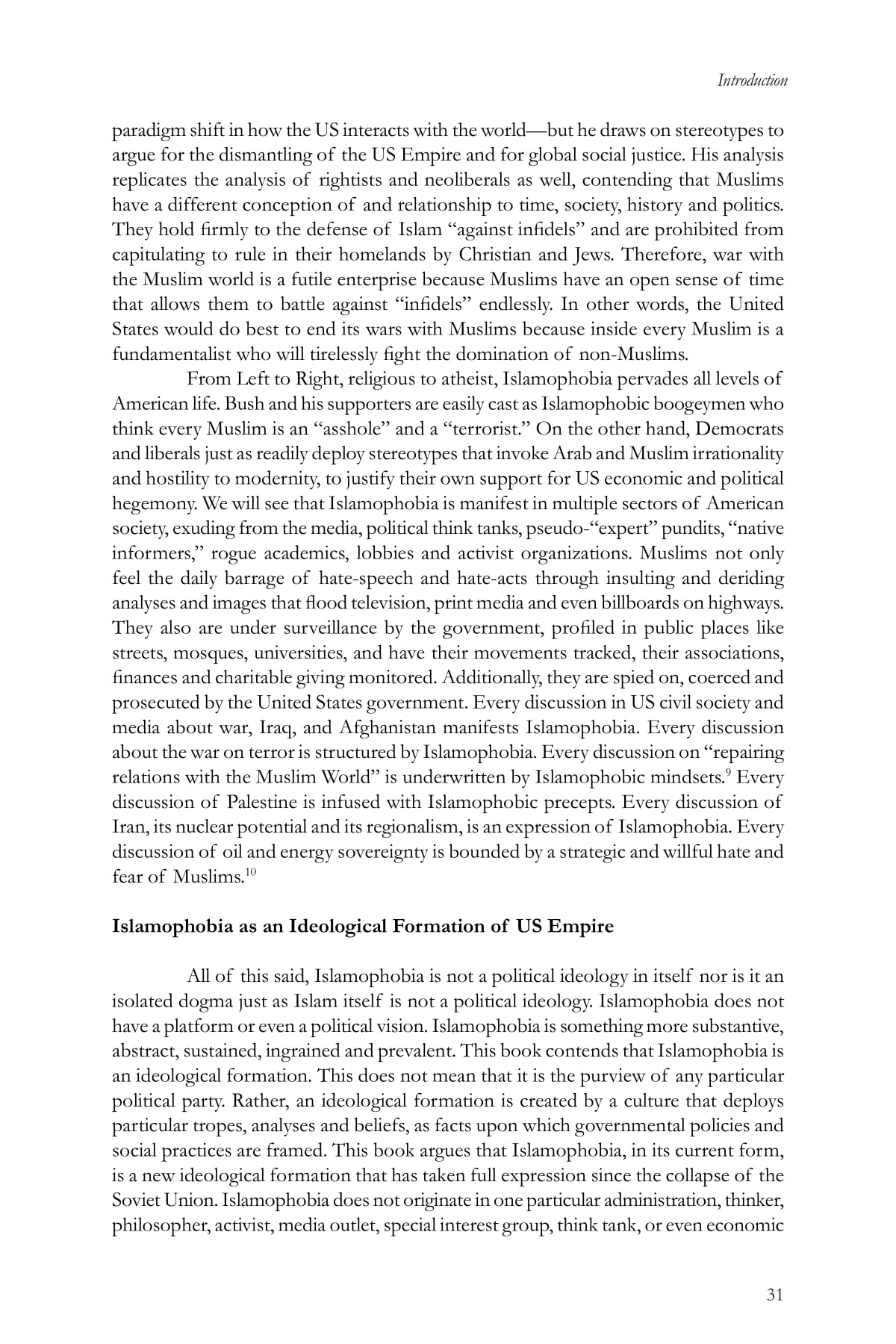 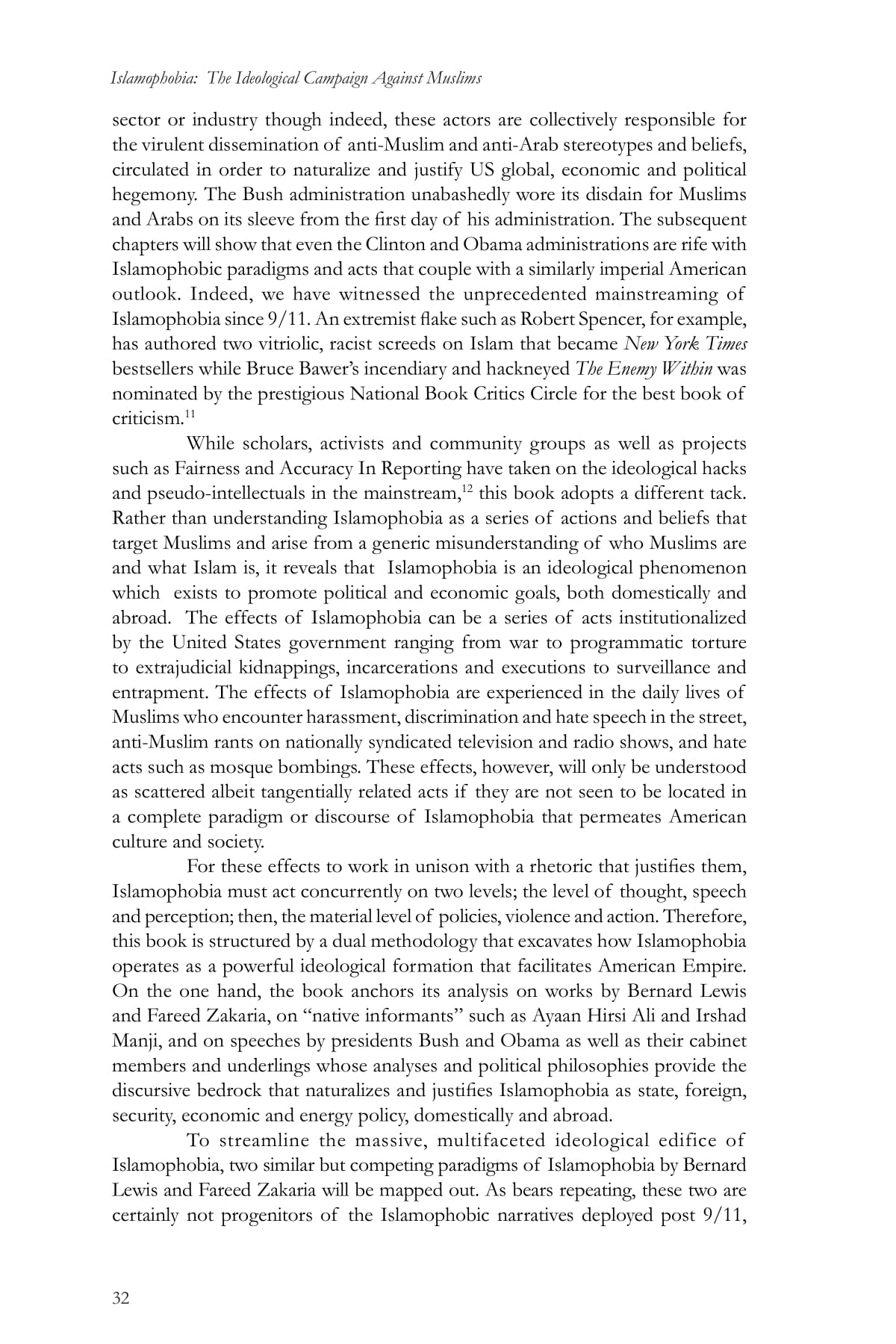 “…the value of this book is incalculable, and Stephen Sheehi is due our deepest thanks and admiration for his courage in writing it.”
from the Foreword by WARD CHURCHILL

“[A] brilliantly synthetic work; a gift to all who struggle to understand the anti-Muslim sentiment so pervasive in contemporary America. In a richly detailed yet accessible manner, Sheehi tackles post-Cold War American Islamophobia in all of its complexity, weaving together its liberal and neoconservative strands, and illustrating that we must interrogate it not as a problem of “prejudice” or “misunderstanding,” nor as a debate about Islam itself, but as an ideological paradigm used to structure and justify U.S. policies, both domestic and international.”

The book focuses on the various genres and modalities of Islamophobia from the works of rogue academics to the commentary by mainstream journalists, to campaigns by political hacks and special interest groups. Some featured Islamophobes are Bernard Lewis. Fareed Zakaria,Thomas Friedman, David Horowitz, Ayaan Hirsi Ali, Irshad Manji, George W. Bush, Dick Cheney, John McCain, Hilary Clinton and Barack Obama. Their theories and opinions operate on an assumption that Muslims, particularly Arab Muslims, suffer from particular cultural lacuna that prevent their cultures from progress, democracy and human rights. While the assertion originated in the colonial era, Sheehi demonstrates that it was refurbished as a viable explanation for Muslim resistance to economic and cultural globalization during the Clinton era. Moreover, the theory was honed into the empirical basis for an interventionist foreign policy and propaganda campaign during the Bush regime and continues to underlie Barack Obama’s new
internationalism.

If the assertions of media pundits and rogue academics became the basis for White House foreign policy, Sheehi also demonstrates how they were translated into a sustained domestic policy of racial profiling and Muslim-baiting by agencies from Homeland Security to the Department of Justice. Furthermore, Sheehi examines the collusion between non-governmental agencies, activist groups and lobbies and local, state and federal agencies in suppressing political speech on US campuses critical of racial profiling, US foreign policy in the Middle East and Israel. While much of the direct violence against Muslims on American streets, shops and campuses has subsided, Islamophobia runs throughout the Obama administration. Sheehi, therefore, concludes that Muslim and Arab-hating emanate from all corners of the American political and cultural spectrum, serving poignant ideological functions in the age of economic, cultural and political globalization.

Stephen Sheehi is Associate Professor of Arabic and Arab Culture and Director of the Arabic Program at the University of South Carolina. He teaches intellectual, literary, cultural, and artistic heritage of Arabo-Islamic world. His work interrogates various modalities of self, society, art and political economy with Arab modernity.
He is the author of Foundations of Modern Arab Identity, which examines the foundational writing of intellectuals of the 19th century Arab Renaissance or al-nahdah al-`arabiyah. The book discusses how Arab intellectuals offered a powerful cultural self-criticism along side their critiques and discussions of modernity, capitalism and European imperialism.
He has also published in journals such as International Journal of Middle Eastern Studies, The British Journal of Middle East Studies, Discourse, Critique, The Journal of Arabic Literature, and The Journal of Comparative South Asian, African, and Middle Eastern Studies.
He has also written on the contemporary politics in Lebanon and academic repression in the United States.
In addition to his scholarship, Prof. Sheehi has also been active in social justice movements in the Middle East and North America.

2 reviews for ISLAMOPHOBIA The Ideological Campaign Against Muslims