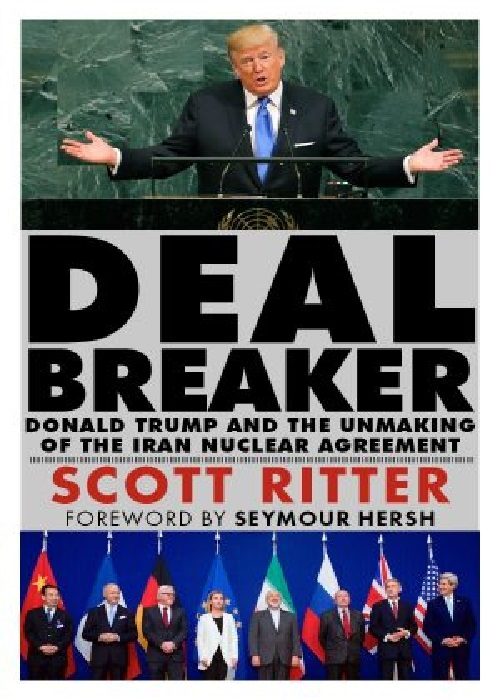 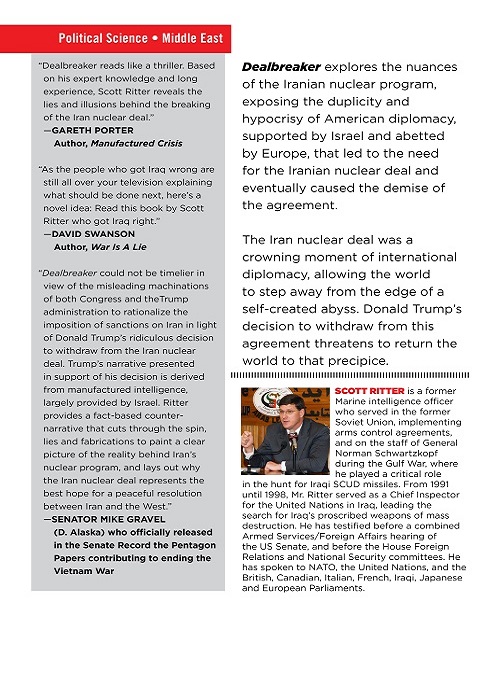 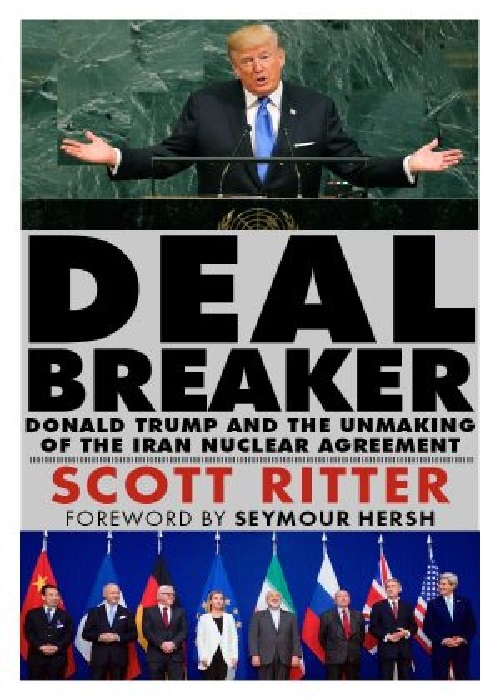 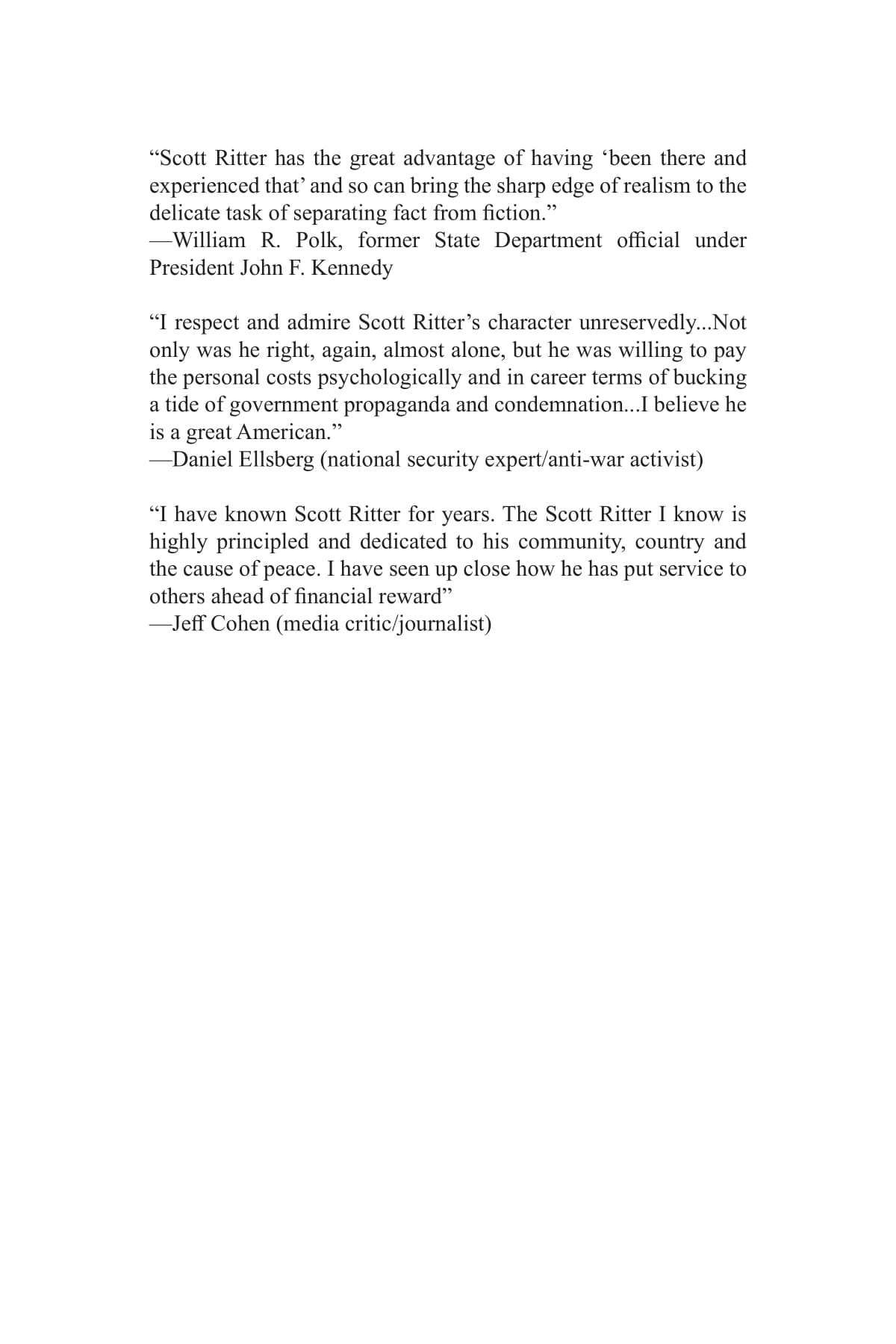 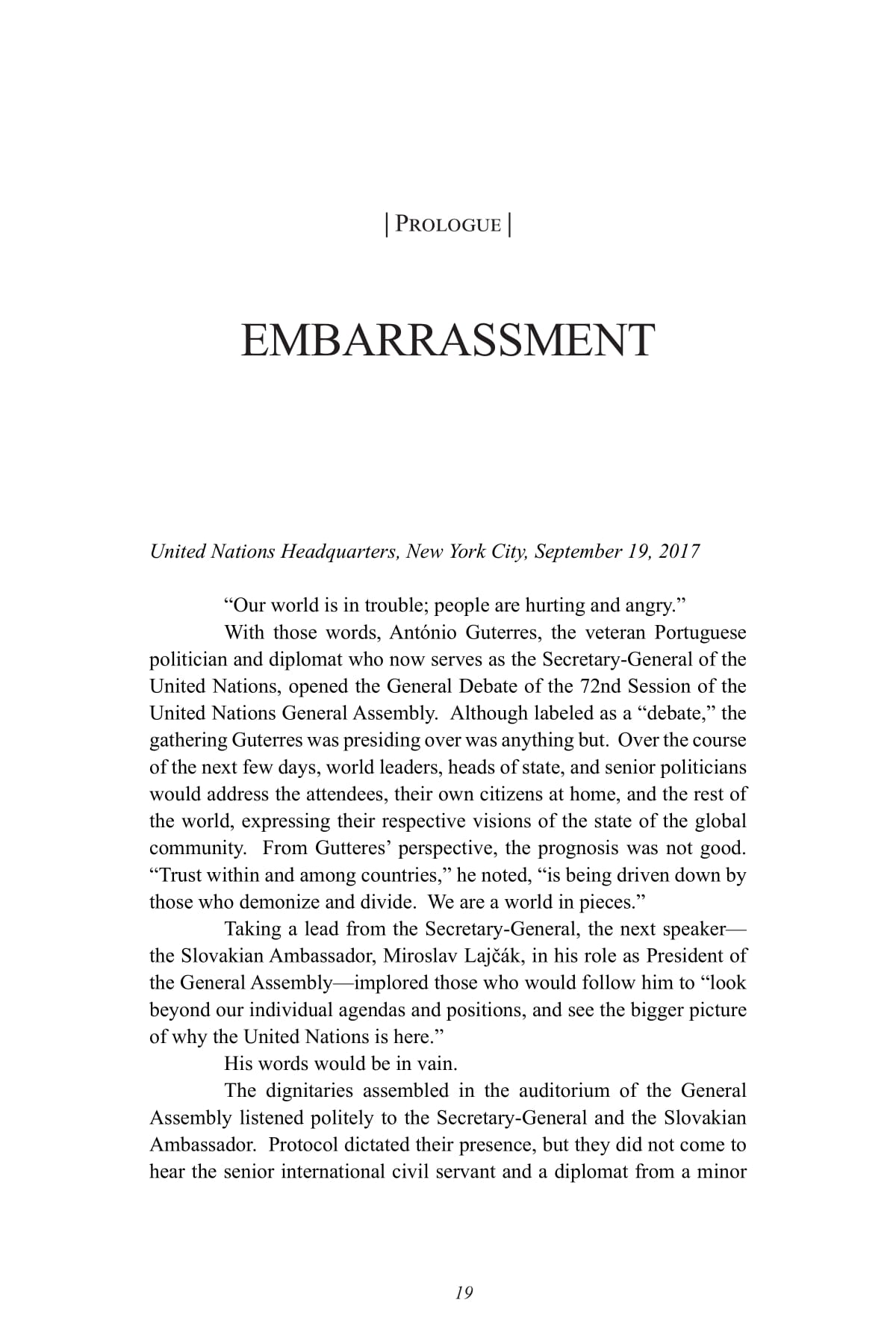 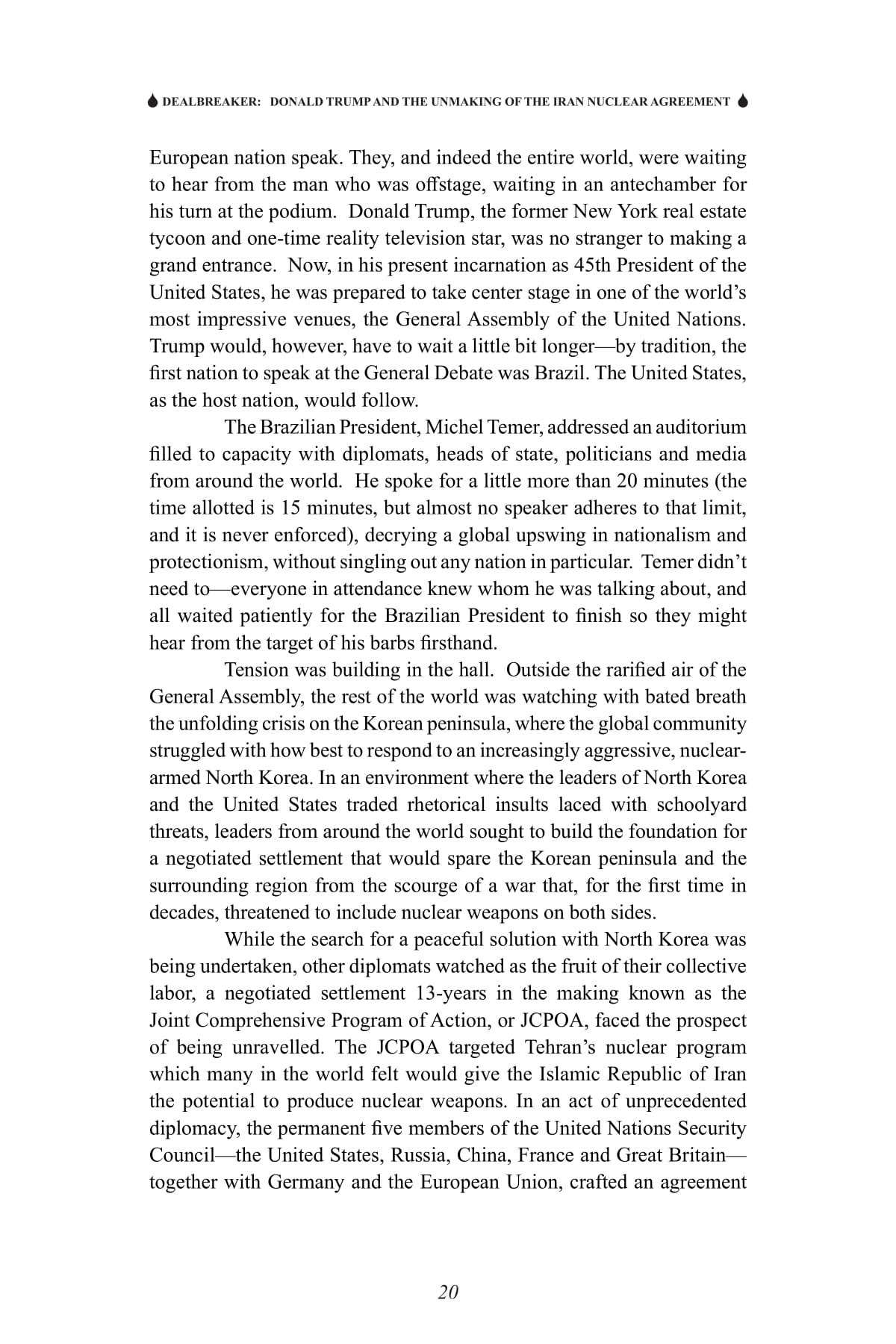 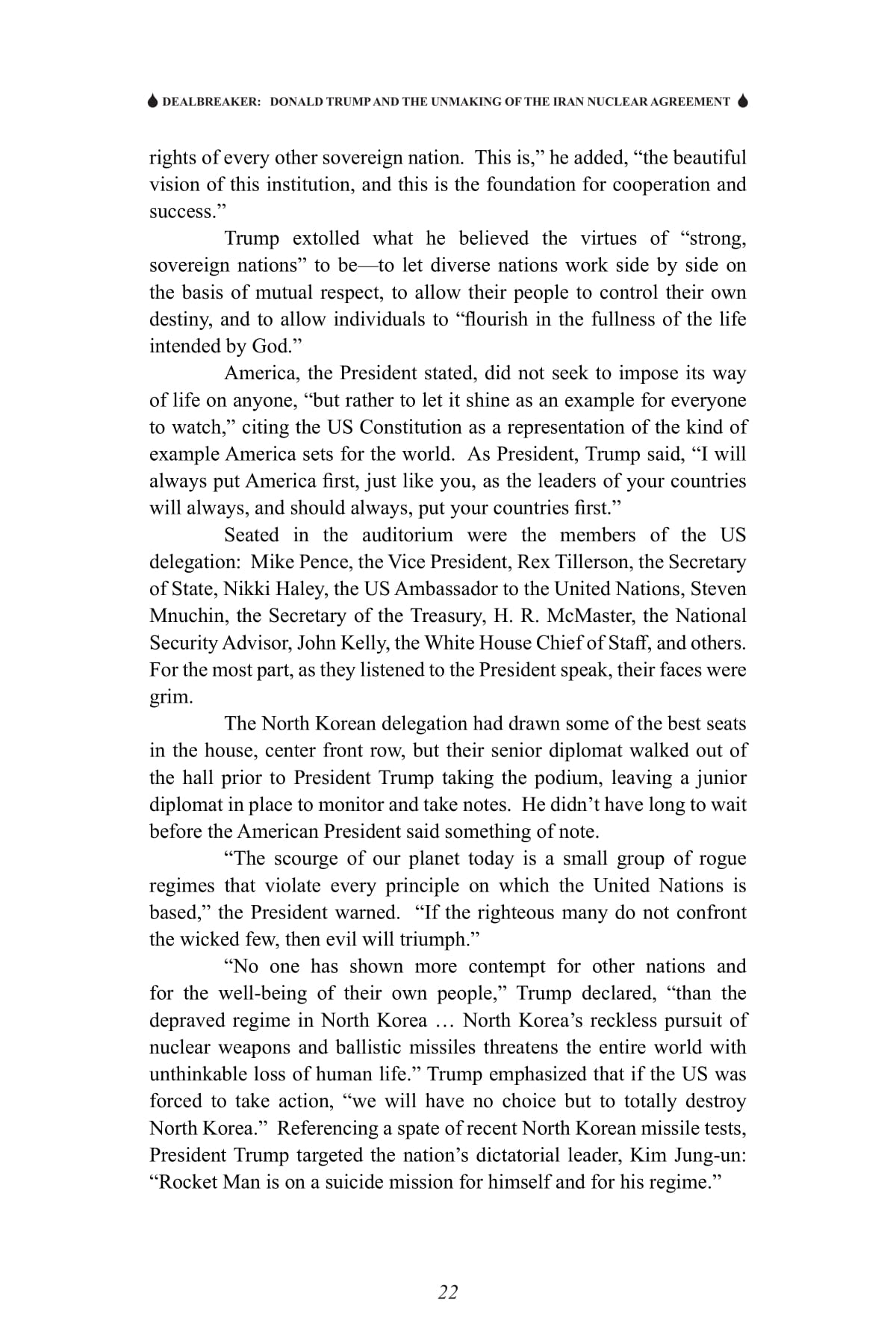 The Iran nuclear deal was a crowning moment of international diplomacy, allowing the world to step away from the edge of a self-created abyss.  Donald Trump’s decision to withdraw from this agreement threatens to return the world to that precipice.  Ritter’s book traces this tragic mistake of historic proportions.

“If Scott Ritter’s warning on Iraq had been heeded, hundreds of thousands of people would be alive today. Deal Breaker is both a warning and a remarkable record of the criminal destruction of an agreement everyone wanted, except the deeply cynical, stupid and/or insane.”—JOHN PILGER

“Dealbreaker could not be timelier in view of the misleading machinations of both Congress and the Trump administration to rationalize the imposition of sanctions on Iran in light of Donald Trump’s ridiculous decision to withdraw from the Iran nuclear deal.  Trump’s narrative presented in support of his decision is derived from manufactured intelligence, largely provided by Israel.  Ritter provides a fact-based counter-narrative that cuts through the spin, lies and fabrications.“—SENATOR MIKE GRAVEL (D. Alaska) 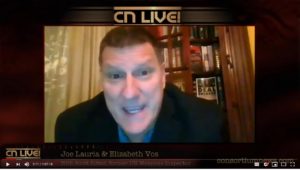 [On Redacted Tonight with Lee Camp]

The Iran nuclear deal was a crowning moment of international diplomacy, allowing the world to step away from the edge of a self-created abyss.  Donald Trump’s decision to withdraw from this agreement threatens to return the world to that precipice.

Dealbreaker recounts how this deal was made, why it was broken, and what the consequences of that action could be.

When the United States made the decision in the 1980s to deny Iran access to nuclear technology, Iran was forced to turn to the black market to get the material, technology and know-how required to meet its need for nuclear power generation, inclusive of the ability to indigenously produce nuclear fuel.  The revelation of Iran’s secret nuclear program in 2002 set in motion a battle of wills between the Iranians, who viewed nuclear power as their inherent right, and the rest of the world, who feared the proliferation implications of allowing Iran access to technology that could be used to make a nuclear weapon.

But the deal had an Achilles heel—the disinformation campaign waged by the United States and Israel to paint the Iranian program as military in nature left a residue of uncertainty and fear that the detractors of the deal used to attack it as little more than a sham.  Donald Trump decried the Iranian nuclear deal as a “failed agreement” and promised to tear it up if he were elected President.  Trump prevailed in the election, and ended up being as good as his word, pulling America out of the Iranian nuclear deal on May 12, 2018.

Dealbreaker explores the nuances of the Iranian nuclear program, exposing the duplicity and hypocrisy of American diplomacy, supported by Israel and abetted by Europe, that led to the need for the Iranian nuclear deal and eventually caused the demise of an agreement that was simultaneously “the deal of the century” and fatally flawed.

Scott Ritter is a former Marine intelligence officer who served in the former Soviet Union, implementing arms control agreements, and on the staff of General Norman Schwartzkopf during the Gulf War, where he played a critical role in the hunt for Iraqi SCUD missiles. From 1991 until 1998, Mr. Ritter served as a Chief Inspector for the United Nations in Iraq, leading the search for Iraq’s proscribed weapons of mass destruction. Mr. Ritter was a vocal critic of the American decision to go to war with Iraq. He resides in Upstate New York, where he writes on issues pertaining to arms control, the Middle East and national security. Dealbreaker is Mr. Ritter’s eighth book.

5 reviews for DEALBREAKER: Donald Trump and the Unmaking of the Iran Nuclear Agreement